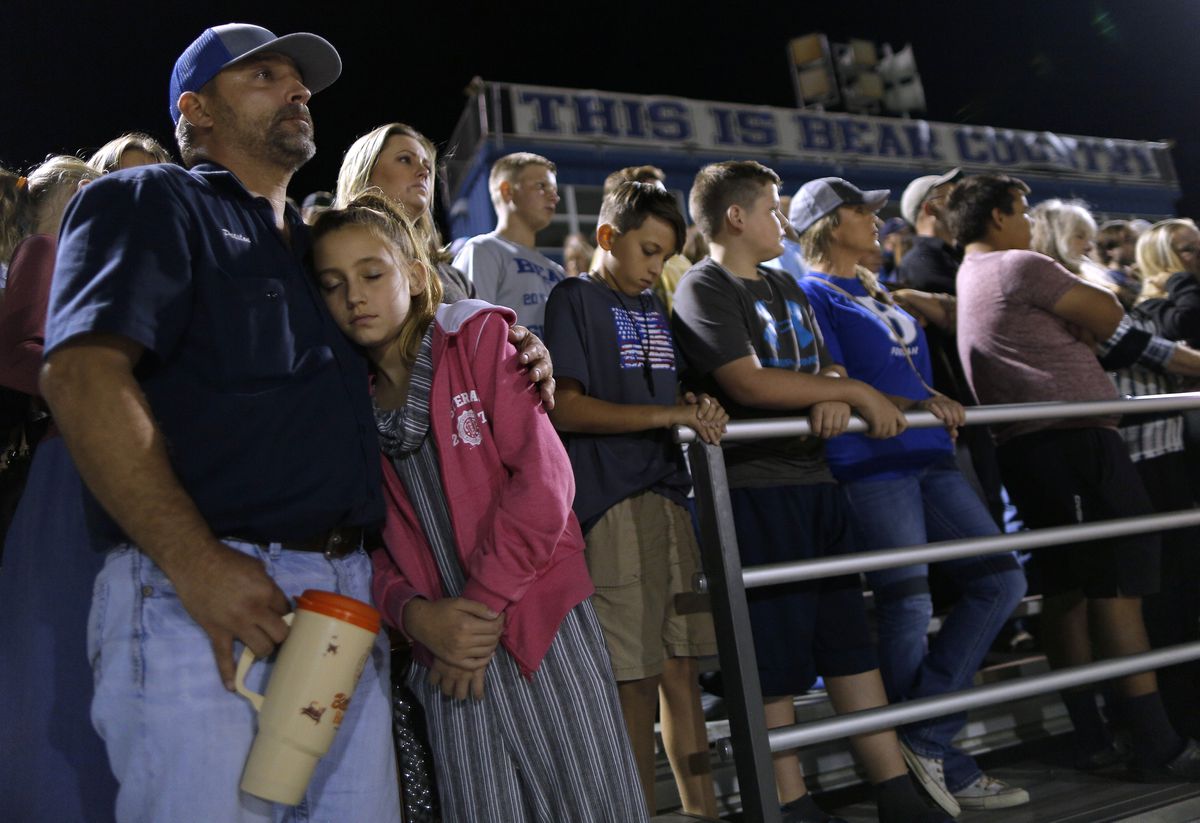 People pray during a vigil in memory of those killed in the shooting at the First Baptist Church of Sutherland Springs. REUTERS/Jonathan Bachman

People pray during a vigil in memory of those killed in the shooting at the First Baptist Church of Sutherland Springs. REUTERS/Jonathan Bachman

The video makes clear that the masked man clad all in black stormed into the church intent on shooting everyone there — and he nearly did. For several minutes, he fired quickly, pausing only to reload, methodically shooting his terrified victims — including small children — in the head, execution-style.

A video camera captured the blood bath inside a rural church, law enforcement officials said Wednesday, recording the worst mass shooting in Texas history, which left 26 people dead, 20 wounded, and a small town devastated. That gruesome footage, which state and federal investigators have reviewed, stemmed from the church's practice of regularly recording its services and posting the videos online.

[Inside the Texas church, she thought it was her turn to die. Then at the front door, another man with a gun.]

Law enforcement agencies declined to say whether they would ever publicly release the video, which shows that the shooting lasted about seven long minutes, said an official who was briefed on the matter, speaking on the condition of anonymity because the investigation is continuing. The official said the killer, armed with an assault rifle, went to the First Baptist Church in Sutherland Springs on Sunday morning with magazines capable of holding more than 400 rounds of ammunition, but it is not clear how many shots he actually fired.

On Wednesday, the Texas Department of Public Safety released the names of the dead, a cross-section of this unincorporated village of a few hundred people southeast of San Antonio. They included 10 women, seven men, eight children, and the unborn fetus carried by one of the victims, Crystal M. Holcombe. The youngest of the children was 1; the oldest of the adults was 77.

Eight of those gunned down belonged to a single family, the Holcombes and the Hills. One victim, Annabelle R. Pomeroy, 14, was the pastor's daughter.

On Wednesday afternoon, Vice President Mike Pence arrived in Texas. He was scheduled to visit a hospital in San Antonio, meet with local law enforcement officials and address a prayer vigil near the church.

The gunman, Devin P. Kelley, 26, was convicted in 2012, while he was in the Air Force, of assaulting his first wife and her toddler son, and he served time in a military prison. Under federal law, that should have prevented him from having firearms, but the Air Force admitted on Monday that it had failed to forward information about him to the national databases used for gun purchase background checks.

The defense secretary, James Mattis, has directed the Pentagon's Office of the Inspector General to look into what happened in that case, and review the reporting system in general. Several investigations and incidents have shown that the databases, run by the FBI, suffer from spotty reporting of criminal cases by the states and the military.

In addition to the assault case, Kelley tried to smuggle firearms onto Holloman Air Force Base in New Mexico, threatened to kill superior officers and spent time confined to a psychiatric hospital, from which he escaped briefly, according to a police report.

He was a suicidal "high risk patient" with "girlfriend issues" who told other patients at the hospital that he had recently bought guns online, according to records released Wednesday by the Mesilla Valley Regional Dispatch Authority in southern New Mexico.

In 2015, Kelley tried unsuccessfully to get a Texas license to carry a handgun — a failure that was tied to an animal cruelty charge against him the year before. While he was living in Colorado Springs, he was charged with a misdemeanor for beating his dog. A judge imposed a deferred judgment, and the charge was dismissed two years later, after Kelley completed a court-ordered period of probation.

When Kelley applied for a license to carry, a check with the national criminal background databases did not turn up his military conviction. But it did reveal an entry from El Paso County, Colorado, the Texas Department of Public Safety said Wednesday — an apparent reference to the animal cruelty case.

An applicant for a carry license must report all arrests, no matter the outcome, and it is not clear whether Kelley reported the animal cruelty case. Even a deferred judgment, like Kelley's, can be grounds for denying a license, and so can failure to disclose it.

Kelley eventually bought four firearms, including the Ruger AR-556 semi-automatic assault rifle he used at the church, passing a background check each time. Investigators have recovered three of the weapons, and are still searching for the fourth. The gunman also had an Apple iPhone with him, according to people familiar with the investigation, but the FBI has not been able to unlock the device.

As Kelley left the church, an armed bystander shot the gunman twice and wounded him, the killer dropped his rifle and fled in his car, and the bystander and another man gave chase. The gunman shot himself in the head with one of two handguns he had taken to the church and was found dead after his car crashed.

Law enforcement officials have said that Kelley had an ongoing dispute with the family of his estranged second wife, but they are still trying to determine if anything else led to the slaughter.

Kelley had attended the church in the past, and his mother-in-law was a regular there, though she was not present during the shooting. His wife's grandmother was one of the people he killed.

Officials have said they have no indication so far that anyone else was involved in the massacre, or that it was politically or religiously motivated.