A hasty, hand-scribbled tax bill sets off an outcry 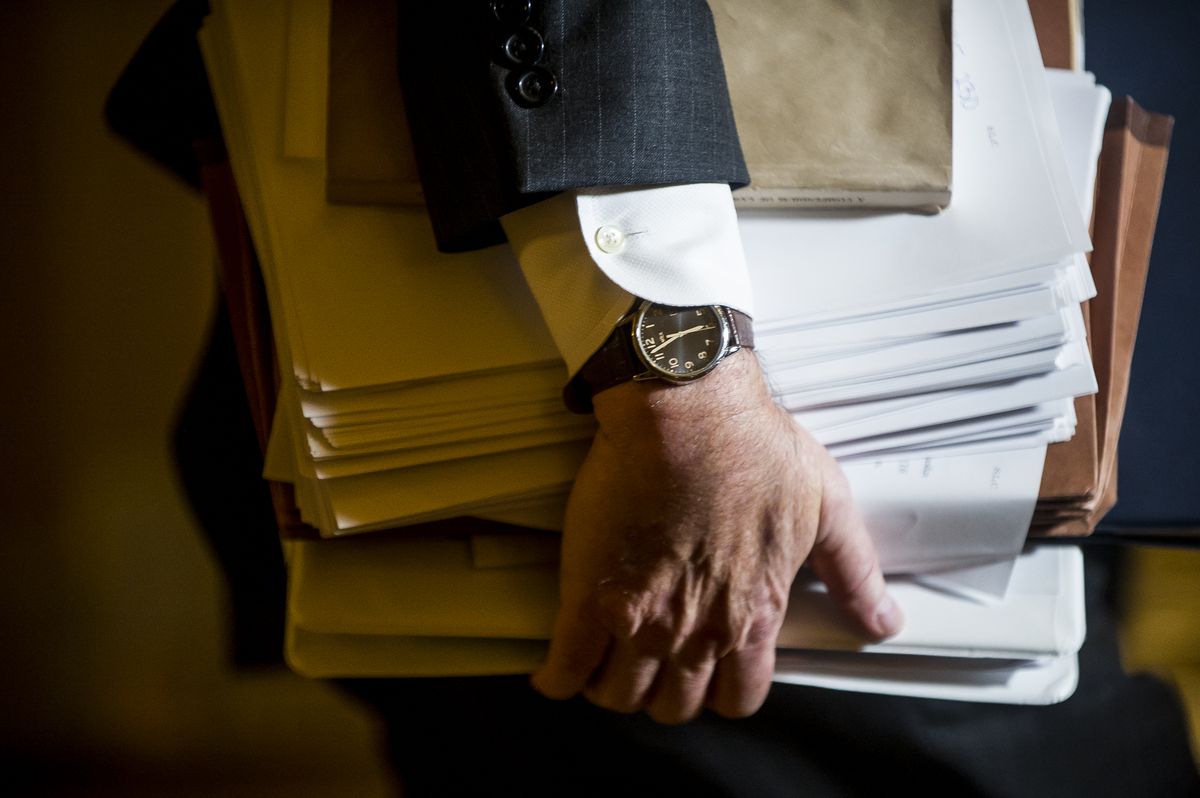 WASHINGTON — By midafternoon Friday, Republicans had the votes to pass their tax bill in the Senate. What they did not have was a bill.

The legislation, covering nearly 500 pages, finally surfaced well after the sun had set. It appeared first in the lobbying shops of K Street, which sent back copies to some Democrats in the Senate, who took to social media to protest being asked to vote in a matter of hours on a bill that had yet to be shared with them directly.

The drafts that leaked to journalists included changes scrawled in looping handwriting in the margins. Democrats posted screenshots and accompanying complaints. Sen. Jon Tester, D-Mont., called it "Washington D.C. at its worst" in a video in which he held up a page of the bill with the changes.

I was just handed a 479-page tax bill a few hours before the vote. One page literally has hand scribbled policy changes on it that can’t be read. This is Washington, D.C. at its worst. Montanans deserve so much better. pic.twitter.com/q6lTpXoXS0

"This is unbelievable, we're doing massive tax reform on an absolute incredible timeline," he said. "This is going to affect everybody in this country."

With Republicans intent on passing a bill along party lines, public protests have been Democrats' only weapon throughout the lightning-fast progression of the bill over the past month. The minority party has no ability to stop the bill, because Republicans are employing a Senate tactic that allows them to bypass a Democratic filibuster. The first version of the tax plan was introduced in the House on Nov. 1 and approved two weeks later; the Senate is on course to match that pace.

That would be a compressed schedule in any event, but it was particularly so on Friday, as Republicans inserted several last-second amendments to secure majority support for their bill. Democrats could only scold and work up a frenzy on social media.

In a separate video, Sen. Elizabeth Warren, D-Mass., held up a stack of legislative text and tried to read the changes that the Republicans had made. She struggled to make sense of the garbled language and lamented that she could not possibly read the bill in the hour or so before the expected vote.

"I just want to give you an idea of how the Republican leadership thinks we're supposed to make laws in the United States Senate," Warren said. "Don't let anybody read it. Just cram through what you want to cram through."

No, I haven’t had time to read the 500-page #GOPTaxScam bill that we’re voting on tonight. I couldn’t read it if I tried – and I did. pic.twitter.com/WgoAT6rxuo

Republicans were unsympathetic. When Sen. Ron Wyden, D-Ore., raised a similar complaint on the floor, Sen. Mitch McConnell of Kentucky, the majority leader, assured him that there would be "plenty of time" to read the bill — after it passed the chamber and headed to a conference committee with the House.

Democrats took particular offense to the way the final amendments to the bill were distributed. Sen. Claire McCaskill of Missouri posted a list of them on her Twitter account and cried foul over the fact that she received a draft from a lobbyist, not from her colleagues across the aisle.

"None of us have seen this list, but lobbyists have it," McCaskill wrote. "Need I say more?"

The bill was still evolving late Friday night, as the Senate parliamentarian struck some of its provisions. Before a final round of votes on amendments, Sen. Chuck Schumer, D-N.Y., the minority leader, rose to deliver a final, scowling rebuke of the process, which he called "reckless ramrodding."

"Republicans are reaching heretofore unreached heights of hypocrisy," Schumer said, "and the Senate is descending to a new low of chicanery."

Shortly after he finished, senators began voting on a series of amendments, leading into the final vote on the bill. By late evening, the bill was finally posted online — handwriting and all.