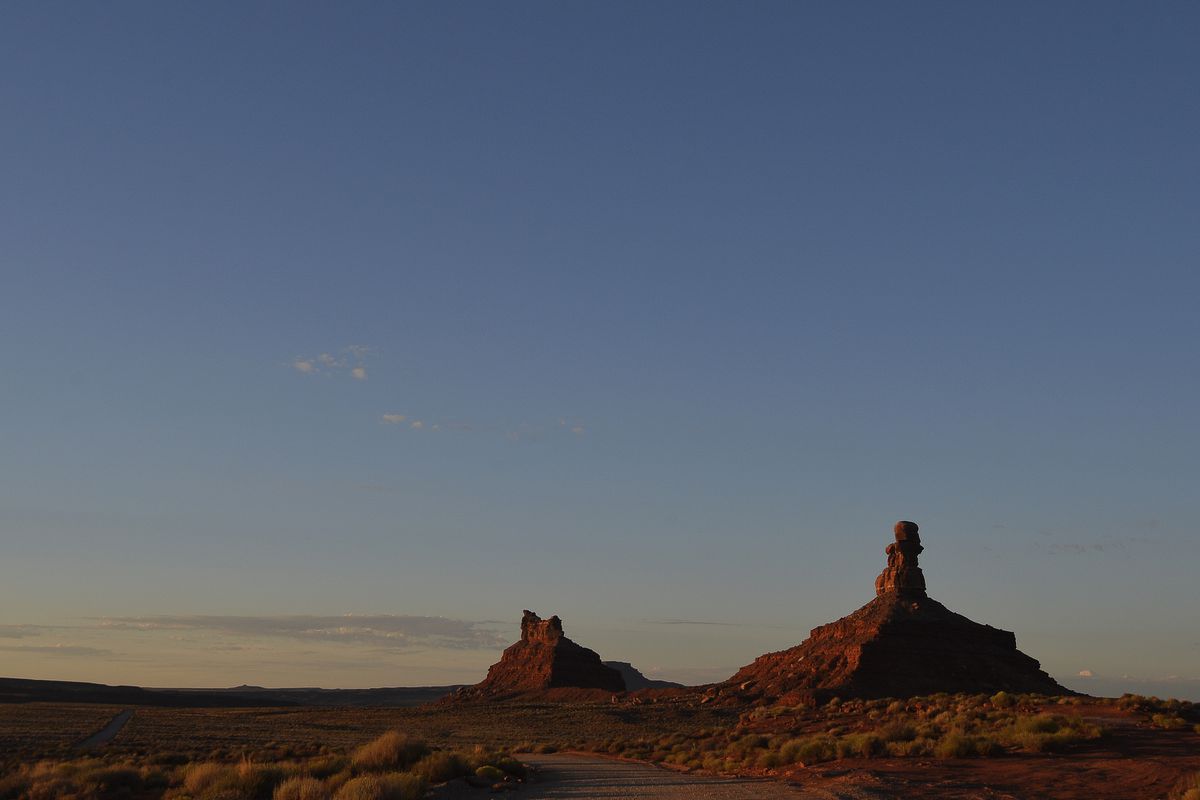 The sun rises over Valley of The Gods inside Bears Ears National Monument in Utah, Aug. 23, 2017. President Trump is expected to announce Monday a historic reduction to the monument, a sprawling region of red rock canyons that has been at the center of a national fight over how much land a president can legally set aside for protection. (Alex Goodlett/The New York Times)

The sun rises over Valley of The Gods inside Bears Ears National Monument in Utah, Aug. 23, 2017. President Trump is expected to announce Monday a historic reduction to the monument, a sprawling region of red rock canyons that has been at the center of a national fight over how much land a president can legally set aside for protection. (Alex Goodlett/The New York Times)

Trump's move to shrink the Bears Ears and Grand Staircase-Escalante national monuments by more than 1.1 million acres and more than 800,000 acres, respectively, immediately sparked an outpouring of praise from conservative lawmakers as well as activists' protests outside the White House and in Utah. It also plunges the Trump administration into uncharted legal territory since no president has sought to modify monuments established under the 1906 Antiquities Act in more than half a century.

His decision removes more than 2 million acres from the two sites, which potentially could now be leased for energy exploration or opened for specific activities such as motorized vehicle use.

"You know best how to conserve these lands for many, many years to come," Trump told a rally in Salt Lake City.

Conservatives have long sought to curb a president's unilateral power to safeguard federal lands and waters under the law, a practice that both Democrats and Republicans have pursued since it was enacted under Theodore Roosevelt. The issue has been a particular flash point in the West, where some local residents feel the federal government already imposes too many restrictions on development and others, including tribal officials, feel greater protections of ancient sites are needed.

Even before Trump made the announcement as part of a day trip to the state, National Cattlemen's Beef Association Craig Uden was hailing the resized designations.

"We are grateful that today's action will allow ranchers to resume their role as responsible stewards of the land and drivers of rural economies," Uden said. "Going forward, it is critical that we reform the Antiquities Act to ensure that those whose livelihoods and communities depend on the land have a voice in federal land management decisions."

State Sen. Kevin VanTassell, a Republican from Vernal, said there was widespread support in the legislature for Trump's move and among Utah residents, who he said have respect for the state's resources.

"People are tired of the federal government locking up our land," he said. "It's an overreach. Imagine if you put one of these monuments smack dab in the middle of New York."

But a series of rallies that opponents began over the weekend continued Monday at the Utah Capitol, where about 300 demonstrators were gathered before Trump arrived. Against the backdrop of the dome and snowy grounds, they chanted "LOCK HIM UP!" and lofted signs reading "Fake President" and "Pussy Grabber."

Roughly 5,000 people have protested there since Saturday, according to one of the organizers, Lindsey Beebe.

Conservation advocates and tribal representatives have for months been preparing legal briefs that aim to block the monument changes in federal court.

Doug Weaver, a partner at the firm Hogan Lovells who represents the Conservation Lands Foundation, Utah Diné Bikéyah and other groups, said the "watershed" moment on this issue came with the 1976 Federal Land Policy and Management Act. "Congress made very clear, as a matter of law, that they intend to delegate only that which has been expressly delegated in terms of management of federal lands," he said – which would mean a president can establish a monument under the Antiquities Act but not "rescind or substantially reduce" a site, he added.

Despite this legal uncertainty, Trump and his deputies have worked to address the concerns raised by Utah politicians such as Republican Sen. Orrin Hatch and executives in the mining, ranching and oil and gas industries. In April, he signed an executive order instructing Interior Secretary Ryan Zinke to review more than two dozen monuments, and he tailored the document so it would include Grand Staircase-Escalante, which Bill Clinton designated in 1996.

In August, Zinke submitted a report to the White House – obtained by The Washington Post but still not released publicly – that called for reducing at least four sites and changing the way at least a half-dozen others are managed. In addition to Grand Staircase-Escalante and Bears Ears, which Barack Obama designated a year ago, Zinke recommended downsizing Oregon's Cascade-Siskiyou and Nevada's Gold Butte national monuments.

Zinke held public events at multiple locations, but the review decision-making process was largely contained to a handful of top staffers at Interior and the White House. Zinke's aides have only had minimal consultations with Bureau of Land Management field office staffers in Utah, according to individuals who spoke on the condition of anonymity for fear of retaliation.

Grand Staircase's Kaiparowits Plateau ranks as one of the most important examples of the Mesozoic Era, when dinosaurs roamed the area, according to Society of Vertebrate Paleontology President David Polly. About a dozen institutions are conducting expeditions there at any given time, and somewhere between 75 percent and 80 percent of the plateau has yet to be explored.

Bears Ears, by contrast, is best known for the tens of thousands of relatively intact archaeological sites and petroglyphs within its boundaries. Some date from the ancestral Pueblo era, and many tribal members continue to visit the area on a regular basis to conduct rituals as well as to gather herbs and firewood.

A senior White House official, who spoke on the condition of anonymity to discuss internal deliberations, said the push to change the monument designations was driven by Hatch, House Natural Resources Committee Chairman Rob Bishop (R-Utah) and Zinke.

Hatch has raised the issue of the two Utah sites repeatedly with both the president and his eldest son, not just during the 2016 campaign but during his visit to the Oval Office on Trump's fifth day in office.

Trump "really likes" Hatch, the White House official said, because he supports his agenda, defends him on TV, praises his children and has a sense of humor. He appreciates his work on the Senate's tax overhaul bill, the aide added, and is hoping the 83-year old incumbent will run for reelection next year rather than provide an opening for Trump political rival Mitt Romney.

The president, who updated Hatch personally on the process, brought him along on Monday's trip on Air Force one and agreed to meet with leaders of the Church of Jesus Christ of Latter-day Saints in Salt Lake City at Hatch's request.

While many Utah Republicans have criticized the sweeping expanse of both monuments – Bears Ears spans 1.35 million acres and Grand Staircase-Escalante stands at nearly 1.9 million acres – they've said recently that they hoped the boost in tourism in each area would continue even if the sites were significantly reduced.

"Whoever's in charge of managing the monument will come up with some places for people to visit, and visit respectfully," San Juan County Commission Chairman Bruce Adams said of Bears Ears.

Even less clear is whether changing the monuments' boundaries will spur extractive activities. The BLM was in the process of drafting an environmental-impact statement on opening up a coal mining operation on public land near Kanab when Clinton established Grand Staircase-Escalante. At the time, the bureau found it would be difficult to transport the coal to market given the site's remoteness and the fact that it included hundreds of thousands of acres of wilderness study areas that prohibited road construction.

And while there are nearly two dozen existing oil and gas leases within the Bears Ears boundaries that Obama designated, a well hasn't been drilled there for a quarter of a century.

According to two senior administration officials, the question of how to treat existing monuments has received significant attention in the White House, which has been focused on taxes. White House official Ty Cobb, who served as the president's attorney and once served as chairman of the Grand Canyon Trust, has opposed the reductions.