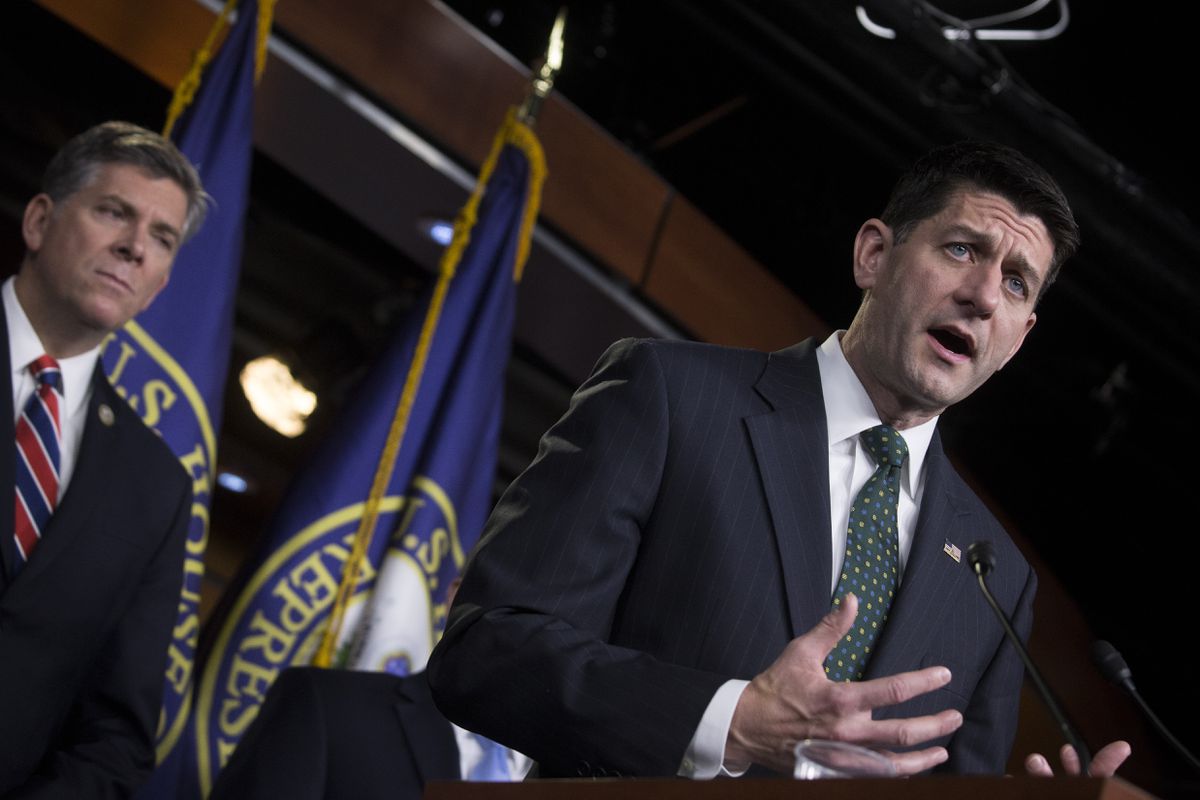 WASHINGTON — Republicans lawmakers, scrambling to find agreement on a unified tax plan that they hope to put to a final vote next week, are coalescing around a bill that would slightly raise the proposed corporate tax rate while lowering the top rate on the richest Americans.

In a frenzy of last-minute negotiations, Republicans drew closer to agreement on nudging the corporate tax rate to 21 percent, up from the 20 percent in the versions of legislation that passed the House and Senate. They are also considering lowering the top individual tax rate to 37 percent, from the current top rate of 39.6 percent, to assuage concerns from some wealthy taxpayers who fear that their tax bills could rise under the current legislation, which eliminates a host of individual tax breaks.

Lawmakers were also discussing limiting the amount of deductible mortgage debt to $750,000 for newly purchased homes, a higher cap than the $500,000 limit in the House-passed bill but lower than the $1 million limit that currently exists and remains in the Senate-passed bill, according to Sen. John Kennedy, R-La.

The negotiations come as lawmakers in the House and Senate seek to align their tax bills, which differ in several significant ways.

Sen. John Cornyn of Texas, the No. 2 Senate Republican, said that House and Senate negotiators were making progress in their effort to agree on a final tax bill and that a deal could be reached as soon as later Tuesday.

"We don't have it right this minute, but we're getting closer," Cornyn said shortly before lunchtime. "We've pingponged a number of offers and counteroffers back and forth."

The bipartisan conference committee is scheduled to hold its one public meeting Wednesday afternoon. While that meeting will give Republicans and Democrats a final chance to publicly debate the merits of a $1.5 trillion tax cut, it is not expected to alter the trajectory of the bill or its details.

"We look forward to scheduling this bill, after they're done with their work, posting it, giving it the appropriate time so everyone can read it, and pass it, sending it to the president's desk," said Rep. Kevin McCarthy, R-Calif., the House majority leader.

Republicans are speeding ahead with the legislation despite criticism from Democrats that the bill hurts the middle class, benefits the rich and creates a raft of new loopholes that corporations and wealthy Americans can exploit. A special election for Senate in Alabama has added to the pressure, as polls show that Doug Jones, a Democrat, has a chance to beat Roy Moore, a Republican judge who has been accused of child molestation. If Democrats are able to flip the seat, the narrow Republican majority in the Senate would fall to 51-49.

House and Senate Republicans have been working behind closed doors to hash out the final details of the tax plan, and they hope to hold a vote next week. Republican leaders want to complete a consensus bill within the next few days and release its text Friday. If all goes according to plan, the Senate would take up the bill Monday and the House would follow Tuesday or Wednesday.

On Tuesday, speculation on the Capitol swirled over which measures in the House and Senate tax bills would survive, be tweaked or be cut. Vice President Mike Pence huddled with Rep. Kevin Brady, R-Texas, chairman of the Ways and Means committee, and joined Senate Republicans for lunch to discuss the remaining details of the tax plan.

The big sticking points that remain include whether to retain the House bill's cap on the mortgage interest deduction, whether to scrap or keep the corporate alternative minimum tax and the estate tax for individuals, and how low to set the corporate tax rate.

"Certainly the president indicated he would be willing to go up a bit, and there's been some other concerns," Sen. Bill Cassidy, R-La., said of raising the corporate tax rate to pay for other fixes in the bill. "Everything's a little bit in flux."

Among the most politically sensitive issues lingering is how to treat the state and local tax deduction, known as SALT, which is capped at $10,000 in property taxes in the House and Senate bills. Lawmakers have been working through possible compromises that would let people continue to deduct a certain amount of property or income taxes, but Republicans still run the risk of raising taxes on broad portions of middle-income constituents.

Lawmakers must keep the cost of the bill to $1.5 trillion if they are to pass it along party lines. Scaling back the SALT deduction appears to be a risk some are willing to take.

"Will there be some outliers who pay more in taxes? Yes," Sen. Patrick J. Toomey, R-Pa., said on CNBC on Tuesday. "There are some people who will pay more because they live in very high-tax jurisdictions."

However, Rep. Darrell Issa, R-Calif., called on Republican members of the conference committee to rethink eliminating the state and local tax deduction as they craft a final bill.

"Among the plan's deficiencies is the elimination of the state and local tax deduction, which since the advent of our federal income tax has prevented the double taxation of Americans' income and allowed states to operate as laboratories of experiment as our founders intended," Issa wrote in a letter to the committee members.

This week, several independent "dynamic" scores of the tax bills, which include the potential revenue-raising effects of economic growth, found that the proposed legislation would still add to the deficit after a decade.

The Treasury Department released a one-page study Monday that showed the tax plan more than paying for itself, but only if economic growth averaged 2.9 percent a year over the next 10 years and if other economic policies proposed by the Trump administration were enacted. Most mainstream economists say they believe that such a high rate of economic growth is not possible.

"I think that estimate makes a lot of sense," Ryan said, arguing that the economic models used by the nonpartisan Joint Committee on Taxation were less reflective of reality.

Democrats and progressives have been assailing Republicans for recklessly adding to the debt and giving big tax breaks to the rich.

"I would hope my Republican colleagues are taking a look at how the American people feel about this disastrous tax bill," said Sen. Bernie Sanders, I-Vt., referring to polling that shows the tax bill as unpopular among the general public. "I hope that they understand that is not what the American people want."