Found: Another star system with eight planets, just like ours 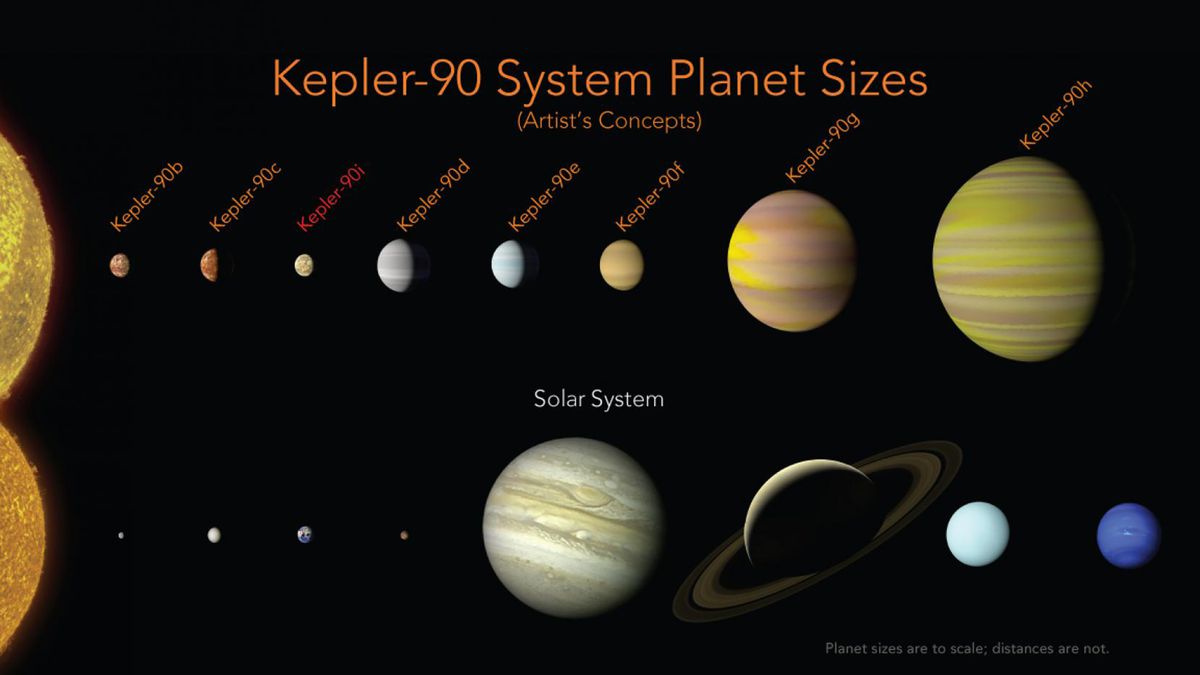 Only a handful of star systems have more than a single planet. With eight worlds, our solar system has long taken the prize for the biggest lineup. But no longer.

Our corner of the galaxy now shares the record with another system, Kepler 90, NASA and Google researchers announced Thursday. A Google algorithm uncovered a scorcher of a planet, a rock 30 percent larger than Earth, orbiting a star a few thousand light-years away. This planet, Kepler 90i, brought the total number of planets circling its star to eight – just like our solar system's octuplets.

"For the first time, we've discovered an eighth planet in a distant planetary system," Paul Hertz, head of NASA's astrophysics division, said during a media briefing. This discovery required an advanced technology to comb through the gargantuan amount of data obtained by the Kepler space observatory.

The Kepler telescope, which trails millions of miles behind Earth like a loyal pup, has gazed out into space since 2009. During that time it has brought in data from 150,000 stars. When an exoplanet crosses in front of one of them, Kepler registers a subtle dip in that star's sunlight.

Fishing for those dips within the massive database is a challenge. "The Kepler mission has so much data it is impossible to examine manually," Christopher Shallue, a Google AI software engineer, explained during the briefing.

With help from Andrew Vanderburg, an astronomer at the University of Texas at Austin, Shallue developed a machine-learning program that detects light curves. (Google and NASA have been collaborating for years; in 2013, they unveiled the Quantum Artificial Intelligence Lab, a machine-learning facility at the space agency's Ames Research Center.) The scientists did not give the program, called a neural network, explicit instructions to find the characteristic curves of an exoplanet. Instead, it had to learn by example.

"A neural network is loosely inspired by the structure of the human brain," Shallue said. "You can think of the neurons as switches." The U-shaped dip of Kepler 90i passing in front of its star was too weak a signal for human detection. But it was strong enough for the AI, churning through 14 billion data points, to detect.

Astronomers are confident that the exoplanet exists and that its surface temperature could exceed 800 degrees Fahrenheit. It has a shorter orbit than Mercury's, completing a circle around its star once every two weeks. "This is almost certainly an exoplanet," Vanderburg said, with the odds of a false positive being 1 in 10,000. Already, the results from this deep data dive have been accepted for publication in the Astronomical Journal.

But the number of worlds is not the only similarity between our solar system and the Kepler 90 system. As in ours, Kepler's small, rocky planets are closest to the sun and its gas giants farthest away. Kepler 90 itself is larger than our sun, though not extremely so.

The planets in our system are far more spread out, however. Neptune is, at its closest, 2.8 billion miles from the sun. The most distant gas giant in the Kepler 90 system is 93 million miles from its star. "All the planets are found scrunched very close to their star," Vanderburg said.

Because the telescope has only observed the system's center, it may contain still other worlds. "It's very possible that Kepler 90 has even more planets that we don't know about," Vanderburg added. Any planet with a longer orbit – a world as far from Kepler 90 as Jupiter is from our sun – would pass by the observatory undetected.

(On the other hand, some astronomers argue it's possible that our solar system has unknown planets, such as Planet Nine, lurking on the fringe. Perhaps we could reclaim our galactic exceptionalism once again.)

The Kepler telescope is in its twilight years. In 2013, two of four reaction wheels that had kept it on target failed. Without a fix, the mission was doomed.

Desperate to salvage the $550 million craft, researchers turned to the only available support: the sun. They harnessed the pressure of solar radiation to stabilize Kepler, as The Post reported in 2014. With two functional wheels and the force of the sun acting like a crutch, the craft could once again focus on distant stars. The reborn project was given the name K2.

During the Kepler and K2 missions, astronomers have confirmed the location of 2,500 exoplanets. Kepler has detected another 5,000 exoplanet candidates, which await confirmation.

The K2 mission was funded for an additional three years of life in 2016. The spacecraft's fuel is expected to run dry at some point in 2018.