Republicans celebrate their tax bill – and heap praise on Trump 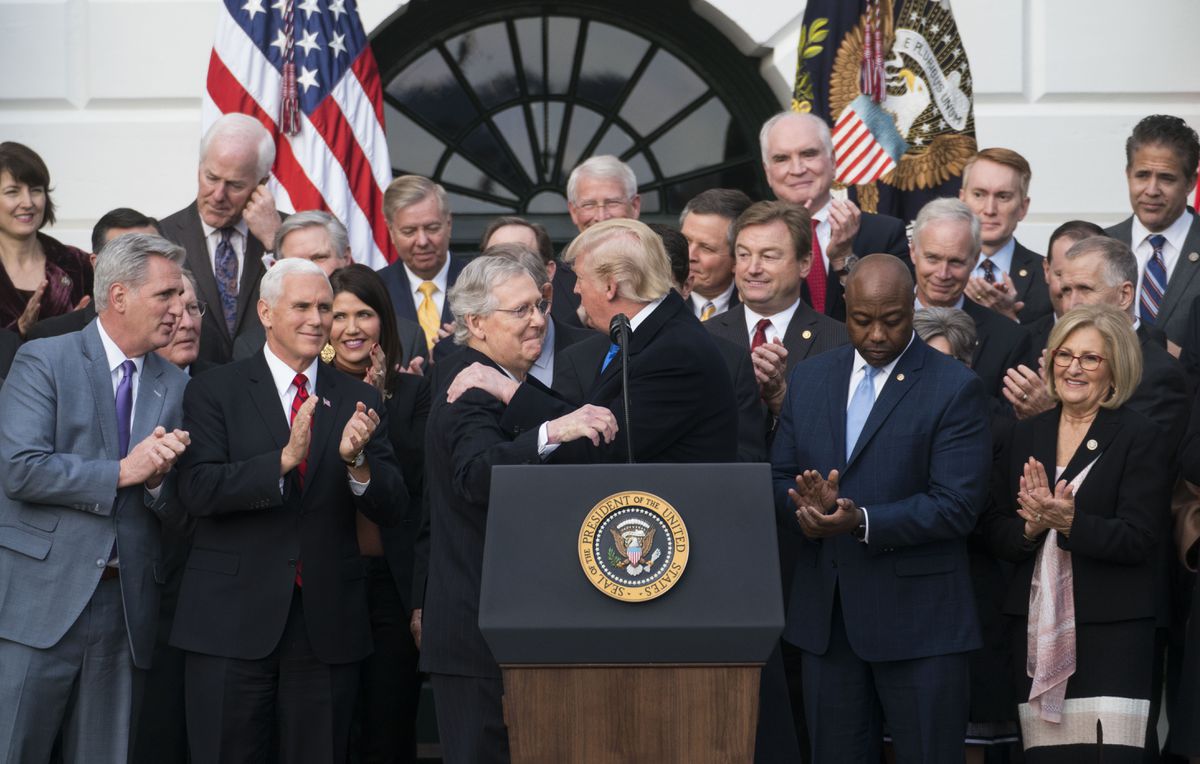 WASHINGTON – As he stood outside the White House on Wednesday, President Donald Trump basked in the praise of Republican lawmakers assembled around him. He was lauded for his "exquisite presidential leadership." He was touted as "one heck of a leader" and as a "man of action."

The occasion was a celebration of the final passage of the GOP tax bill, by far the most significant legislative achievement of Trump's tumultuous first year in office.

But the adulation from the Republican lawmakers signaled an even bigger moment: Many were embracing not only a shared accomplishment with Trump, but also his unorthodox presidency itself.

"You made the case for the tax bill," Senate Majority Leader Mitch McConnell, R-Ky., told Trump. But McConnell didn't stop there.

"This has been a year of extraordinary accomplishment for the Trump administration," crowed McConnell, who proceeded to praise the president for tackling the "overregulation of the American economy" and for winning Senate confirmation of a dozen nominees to federal circuit courts.

That, McConnell said, is better than any president has done since the creation of the circuit court system in 1891.

"You hold the record," McConnell said. "Thank you, Mr. President, for all you're doing."

Just four months before Wednesday's scene on the South Lawn, Trump and McConnell were giving one another the silent treatment after Trump had derided McConnell's inability to get a health-care overhaul through his chamber. In August, Trump fired off several tweet's targeting the Senate leader and then told reporters he was "very disappointed in Mitch" and wouldn't say whether McConnell should resign.

On Wednesday, that issue seemed resolved in Trump's mind.

On a crisp winter afternoon, the Republican lawmakers stood on the steps of the south portico – assembled like the triumphant sports teams that visit the White House to receive Trump's congratulations.

Trump touted passage of the tax bill as a team effort, adding: "It's always a lot of fun when you win. If you work hard and lose, that's not acceptable."

For McConnell and many other Republicans on the Hill, Trump's arrival in Washington was an arranged marriage. Many have grimaced at his provocative tweets and other unpresidential antics, holding out hope that Republican control of the White House and Congress would yield some long-elusive policy outcomes.

The tax battle offered evidence that such victories are possible.

As Trump played emcee at Wednesday's event, he gave nearly a dozen lawmakers a turn at the microphone.

"I want to have them come up and get the glamour and the glory," Trump said.

In fact, it was Trump who got most of the glory – from lawmakers who demonstrated they have learned that the president responds well to stroking his ego.

It was House Speaker Paul Ryan, R-Wis., who praised the "exquisite presidential leadership" of Trump.

"We would not be standing here if it were not for you," House Majority Leader Kevin McCarthy, R-Calif., said when he got his chance.

"But for your leadership we would not be here today," said Rep. Kevin Brady, R-Texas, chairman of the House Ways and Means Committee, which crafted the House version of the tax bill.

"Mr. President, I have to say that you're living up to everything I thought you would," Hatch said. "You're one heck of a leader, and we're all benefiting from it . . . You stop and think about it, this president hasn't even been in office for a year, and look at all the things that he's been able to get done, by sheer will in many ways."

Vice President Mike Pence, as is his habit, was not to be outdone in praising his boss.

"I truly do believe, Mr. President, that this will be remembered as a pivotal moment in the life of our nation, a day when the Congress answered your call and made history," he said. "But honestly, I would say to the American people, President Trump has been making history since the first day of this administration."

Pence participated in a separate celebration of Trump just a couple of hours earlier, joining the president and his Cabinet in a meeting in the White House.

About 20 minutes of the Cabinet meeting witnessed by reporters included repeated praise of Trump and a prayer from Ben Carson, his housing secretary.

As Trump and his Cabinet bowed their heads, Carson thanked God for "a president and for Cabinet members who are courageous, who are willing to face the winds of controversy in order to provide a better future for those who come behind us."

"Thank you, Ben. Beautiful," Trump said after Carson wrapped up. "Thank you very much."