‘A towering legacy of goodness’: Ben Barres’ fight for diversity in science 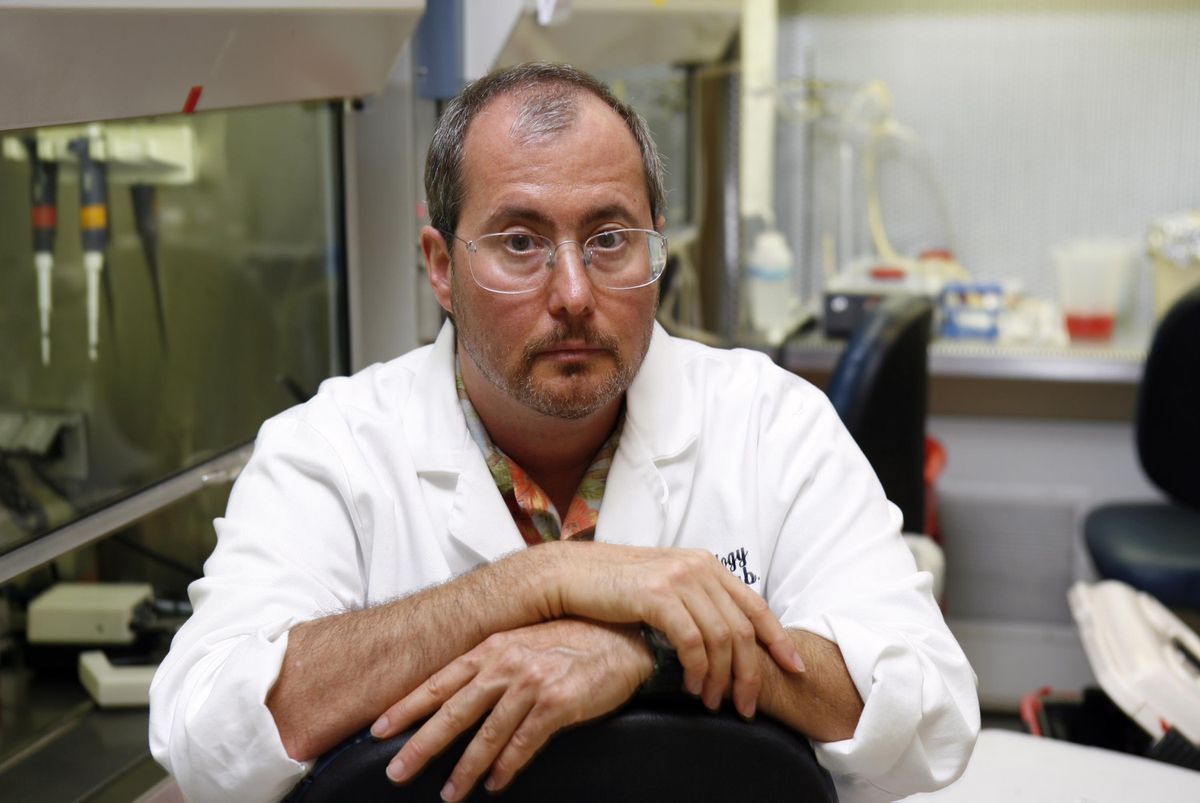 Dr. Ben Barres, professor of neurobiology at Stanford University, in a Palo Alto, Calif., lab on July 11, 2006. Like many scientists, Barres, a professor of neurobiology at Stanford, had strong opinions on the debate over the place of women in science. But he has a singular perspective: until his surgery in the mid-1990s, his name was Barbara, and he was a woman. (Thor Swift/The New York Times file)

Dr. Ben Barres, professor of neurobiology at Stanford University, in a Palo Alto, Calif., lab on July 11, 2006. Like many scientists, Barres, a professor of neurobiology at Stanford, had strong opinions on the debate over the place of women in science. But he has a singular perspective: until his surgery in the mid-1990s, his name was Barbara, and he was a woman. (Thor Swift/The New York Times file)

A few years after neuroscientist Ben Barres became a tenured professor at Stanford, he overheard a colleague talking about one of his classes: "Ben Barres gave a great seminar today, but then his work is much better than his sister's."

But Barres had no sister in the field. The woman whose research the colleague disparaged was the same person as the man he now praised. Barres, who was named Barbara and designated female at birth, had transitioned not long before. That experience gave Barres keen insight into the inequalities that pervaded science – and a determination to correct them.

Barres died Wednesday of pancreatic cancer, Stanford announced. He was 63. Within neuroscience, he was known as "the godfather of glia," for his pioneering work on the cells that make up 90 percent of the human brain. And across academia, Barres was beloved for his efforts to make science more inclusive.

"His passion was for science," Andrew Huberman, an associate professor of neurobiology at Stanford who spent five years as Barres' advisee, said in Barres' Stanford obituary. "His mission was to bring equality to how people are treated and promoted in science."

['The last classic polar explorer': Spotlighting the life of a pioneering scientist in northeast Alaska]

First, in a controversial speech at a conference on diversifying science and engineering, Harvard University president Larry Summers suggested that innate differences between genders were responsible for the underrepresentation of women.

Then the National Institutes of Health announced the winners of a prestigious award program: All nine were men.

Those events, Barres would later write, prompted him to rethink episodes from his years as Barbara: The time a high school guidance counselor who discouraged him from applying to MIT, which in the 1970s admitted very few women. (Barres ignored him, was accepted early, and became the first person in his family to go to college.) And when a math professor said Barres' boyfriend must have helped him, when solving a problem that stumped the other male classmates. And the time a Harvard dean who confided that Barres was by far the most qualified applicant for a fellowship, but awarded it to a man.

Barres transitioned in the late 1990s, at age 42. As Ben, he faced transphobia and discrimination in health care. But he also found that his colleagues were treating him with more respect. "I can even complete a whole sentence without being interrupted by a man," he often said.

Recognizing that his experience offered a counterpoint to "the Summers hypothesis," Barres opened up about his transition in an in-depth rebuttal published in the journal Nature.

But those were just anecdotes; a scientist seeks data. So he found that, too: studies revealing high math scores among young girls and the gender bias that holds them back later in life.

"Until intolerance is addressed, women will continue to advance only slowly," Barres wrote. "The comments . . . about women's lesser innate abilities are all wrongful and personal attacks on my character and capabilities as well as on my colleagues' and students' abilities and self esteem. I will certainly not sit around silently and endure them."

In a time when few scientists – especially male scientists – were eager to embroil themselves in the debate over gender bias, Barres repeatedly brought up the issue in his lectures.

Andrew Giessel, a biologist and computer scientist at the biotech firm Moderna Therapeutics, recalled attending a seminar about Barres' research. At the end of the session, the neuroscientist set aside time to delve into a discussion of diversity – "an act so outside the norm that it sticks with me to this day," Giessel tweeted.

Barres worried that his activism might make his colleagues less willing to consider his research: "Besides changing sex, the only time in my life when I have taken an action when I thought might harm my career is when I started fighting for the welfare of women in academia," he said in a 2008 talk at Harvard.

Even as Barres became an oft-referenced figure and sought-after speaker in discussions about gender equality, he achieved important breakthroughs in the study of glia. In 2005, he showed that the overlooked brain cells were essential for forming connections between neurons. He was elected a fellow of the American Association for the Advancement of Science in 2011, and two years later became the first transgender person elected to the National Academy of Sciences.

Barres' efforts to make science more welcoming went beyond gender equity. His own students describe him as a generous mentor, and he went out of his way to look out for the careers of others. Alycia Mosley Austin, a neuroscience doctoral student, recalled on Twitter how Barres once stopped in the middle of an interview to call another school and advocate on her behalf. One of his last publications was an article in Nature urging researchers to make it easier for scientists who recently obtained their PhDs to set up their own labs. According to his Stanford obituary, Barres spent his final weeks making sure he'd finished letters of recommendation for the younger researchers in his lab.

"He gave lots of advice, but he treated us as equals," neurobiologist Cagla Eroglu, now at Duke University, told Discover Magazine last year. "He taught us to be independent thinkers and manage projects by ourselves."

News of Barres's death has prompted an outpouring of heartfelt tributes online. "I knocked on his door as a first year and Ben Barres stayed an hour later to give me advice about women and medicine," said Stanford medical student Natalia Birgisson. "I once invited Ben Barres to speak to young LGBT students . . . he responded in 10 minutes," recalled Rockefeller University researcher Trevor Sorrells. "He made my life possible as a transgender neuroscientist," said E. Kale Edmiston, a researcher at the University of Pittsburgh.

In a tweet, Jo Handelsman, a molecular biologist and director of the Wisconsin Institute for Discovery, called Barres "a great scientist, leader, mentor, and friend."

"His impact on our understanding of glia was rivaled by his impact on diversity in science," she wrote. "Ben . . . you leave a towering legacy of goodness."