Scientists say this fungus is Dracula with a twist: It kills bats. But it’s afraid of light. 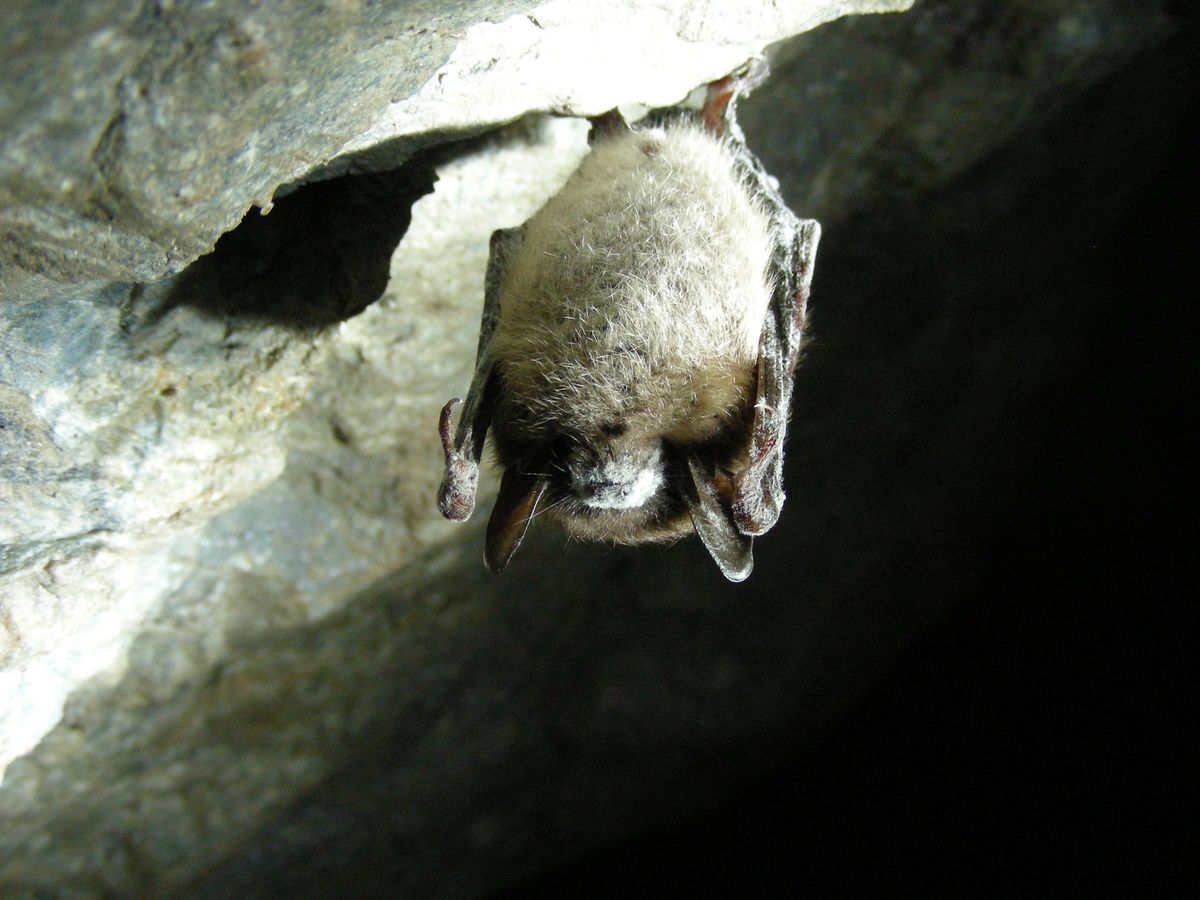 The killer has a scientific name, but its gruesome behavior is familiar to anyone who's read a horror story.

Pseudogymnoascus destructans is essentially a pathogen's version of a vampire. It lurks in the dark, sneaks up on its victims and snuffs them out quietly, with hardly a squeak. The cold-craving fungus causes white nose syndrome, a disease that has wiped out millions of bats as they hibernate, littering caves with their corpses.

Yet a study published this week reveals the killer's glaring weakness: Ultraviolet light destroys it.

"It's something that has evolved for millions of years in the dark. Its ability to repair damage caused by UV light . . . seems to be entirely lacking in this fungus," said Daniel Lindner, a research plant pathologist for the U.S. Forest Service. "I'd go as far as to say it's a vampire fungus. It doesn't go up in a puff of smoke, (but) it's gone down an evolutionary path so far that it's really a creature of the dark."

After nearly a decade of studying the pathogen that has destroyed 90 percent of bats in some areas, researchers' discovery is potentially a breakthrough. Scientists have followed a trail of dead bats across much of the United States and Canada as white nose syndrome went unchecked in caves and mines. Now there's a tool that might finally turn the tables.

But developing the tool will take time. Lindner, one of the study's four authors, said afflicted bats are being treated with quick pulses of light to determine whether that can destroy the fungus. The first results will not be known for months.

Lindner and his co-authors – Jonathan Palmer, a Forest Service research biologist, and Kevin Drees and Jeffrey Foster, both research scientists at the University of New Hampshire – worked for three years before they identified the pathogen's basic flaw.

Palmer was in the midst of compiling a mind-numbing mass of data from sequencing its genome when he realized there was a gap in its string of DNA. "Fungi are somewhat easy to sequence, as opposed to a person, but still you end up with this data overload problem," he said.

"It was a needle in the haystack, trying to figure out what it means. It took a couple of years to tease out," Palmer said.

Pseudogymnoascus destructans is ancient, much older than mummies. It evolved millions of years ago with bats in Eurasia, which still appear to be unaffected by the disease. But after the fungus made its way across the Atlantic Ocean, North American bats appeared to have no natural defense. It attacked them while they tried to hibernate, causing them to burn fat stores they needed to survive through winter.

If the carnage continues, bats – little brown bats in particular – are headed for extinction. White nose syndrome first emerged in New York near Albany about 10 years ago and over time migrated to Florida and across to Nebraska, leaving at least 7 million dead animals in its wake.

Then, in 2016, it leapfrogged to Washington state, setting off alarms at the numerous federal and state agencies tracking it. "I think this is really bad," Katie Gillies, director of the Imperiled Species Program at Bat Conservation International in Texas, said at the time. "I really do think this is a big leap. Now we're going to see it radiate from that new point. It's like having breast cancer and finding that it's metastasized."

The outlook only worsened last year. Pseudogymnoascus destructans crept into Texas, the state with the nation's largest diversity of bats and, in a cave outside San Antonio, one of the world's largest colonies of a single species. That brought the number of states where the fungus is present to 33 and cast doubt on efforts to contain it.

[Bringing Alaska's bats out from the shadows]

The latest research was part of an all-hands-on-deck response to white nose and literally brings a ray of hope. "We now have a grant to apply UV light to bats that have white nose syndrome. That's where we'll find out if you apply it to bats, does it help," Lindner said. He described the procedure as a "mini tanning bed for bats" where light is flashed on them in low doses. "All it takes is a quick dose of a couple of seconds," he said.

Scientist are exploring a number of other options, too, including bathing infected caves and mines where bats hibernate in light. But the fungus can easily elude light. "You can take a handheld light and kill the fungus in the cave – that's what we thought of first," Lindner said. "But once you go into these sites you realize how vast they are."

Another solution that is being considered: Pulsing light at a narrow cave entrance where bats come and go. That might save relatively few bats, if the approach succeeds at all, although even saving a few could be enough to give several species a chance to survive.

"We're all, in the white nose community, searching for something, something we can exploit as a treatment option," Palmer said. "I'm hopeful," he said of the recent discovery. "It's something that no one has looked at before."