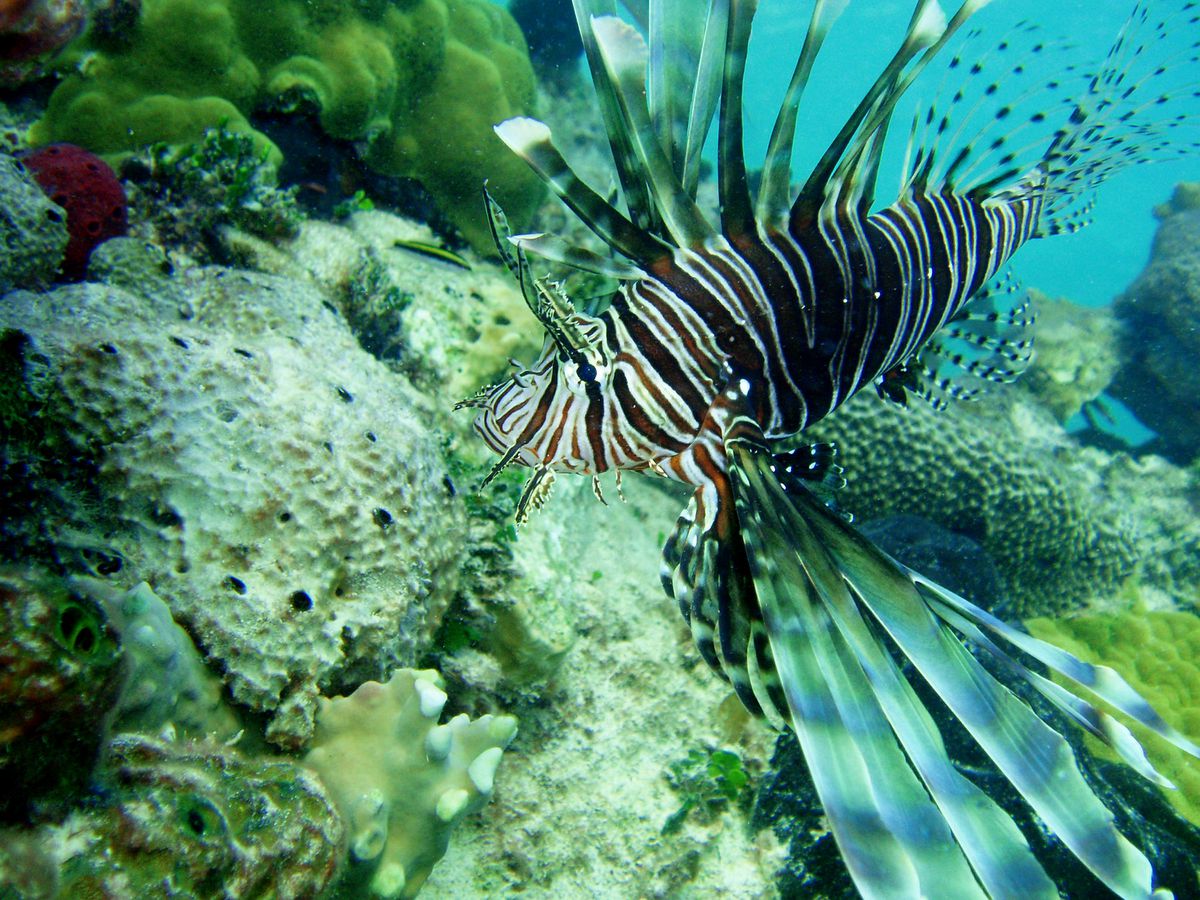 Lionfish, like this one spotted in the Bahamas, are a carnivorous, non-native predatory fish that damage coral reefs and can decimate native fish populations. (Cammy Clark/Miami Herald/TNS)

Lionfish, like this one spotted in the Bahamas, are a carnivorous, non-native predatory fish that damage coral reefs and can decimate native fish populations. (Cammy Clark/Miami Herald/TNS)

FORT LAUDERDALE, Fla. — They are festive killing sprees, contests among divers armed with spears and nets to catch the biggest haul of venomous, non-native fish that have colonized South Florida's reefs.

Lionfish derbies take aim at spiky, elaborately decorated fish from the Indian and Pacific oceans that have done to Florida's coastal waters what Burmese pythons have done to the Everglades. The fish devour native species and compete with them for prey, while reproducing at a rate that has frustrated attempts at controlling them.

The derbies, organized by environmental groups and scuba organizations across South Florida, award cash prizes for the most fish caught, the biggest fish and even the smallest fish, in a party atmosphere that often includes cooking demonstrations, lionfish tastings and live music. Some scientists have been skeptical of the effectiveness of these efforts, regarding the derbies as feel-good events that do little to hold down lionfish populations. A new study, however, claims these lionfish-killing contests can — sometimes — have lasting effect.

The study, published in the peer-reviewed journal Conservation Letters, claims that lionfish derbies reduced the species' numbers by 52 percent over an average area of 74 square miles over three years in Key Largo and the Bahamas. The study was led by Stephanie Greene, a scientist at Stanford University's Center for Ocean Solutions, who has worked with Reef Environmental Education Foundation, or REEF, a Key Largo nonprofit that organizes lionfish derbies.

The most successful derbies took place in the Bahamas study area, where the one-day events resulted in a permanent decrease in lionfish populations below the level that would harm native fish. Less successful was the one in Key Largo. Although numbers went down and stayed down, the lionfish that did take their place were bigger, resulting in no reduction in the threat to native fish.

Lad Akins, director of special projects for REEF and a co-author of the study, said the greater success in the Bahamas may stem from the study's region's isolation from other coastal waters, which would have reduced recruitment of lionfish from other populations. But he said the study showed the derbies can reduce the lionfish threat, if held frequently enough and in the places most likely to benefit from them.

"We were a little skeptical as well," he said. "The question had been posed, how effective are these events? They're great at educating people and we know a lot of fish come in, but it was very surprising to me to see how effective the derbies could be across such a large area."

Native to the Indian and Pacific oceans, lionfish were first reported in Florida off Dania Beach in 1985, and since then have spread through coastal waters on both coasts of the state. Their appearance in Florida has been blamed on owners of home aquariums who released them. The state has since banned their importation.

Lionfish typically grow about a foot long and use their venomous, needle-like spines for defense. Even in the rough environment of a coral reef, where predators lurk in every nook, lionfish are impressive competitors. They can take prey more than half their own length, using their fins to herd their quarry into a corner. And they're not choosy. They're known to consume more than 70 species of fish and invertebrates, according to the Florida Fish and Wildlife Conservation Commission. Aggressive and territorial, they can reach densities of up to 200 adults per acre.

Michael Allen, professor of fisheries and aquatic sciences at the University of Florida, who was not involved in the study, said he has overcome his initial skepticism on the value of lionfish derbies, not that he thinks they can come anywhere close to eradicating the species from Florida.

"When I first started working on this, I was of the opinion that derbies aren't a great use of resources," he said. "And in the grand scheme of things, derbies are probably not going to reduce lionfish in, for example, the Gulf of Mexico. But I do think that the recent work that paper showed that if focused in areas that are deemed critical habitat, important areas, and if the derbies are done regularly with regular removal, you can suppress lionfish abundances substantially."

They need to be done more frequently than the once-a-year intervals that are common, he said. And they work best on isolated populations of lionfish, so the removals don't simply open up spots for surplus lionfish on an adjacent reef.

"The take-home message for derbies is that yes, they can be effective for reducing lionfish abundance substantially," he said. "The best strategy for lionfish removals is going to be repeated removals in a focused area. The key to doing it is to focus on hotspots where we want to protect a diverse reef community. If you repeatedly remove lionfish off those sites, you can have a long-term impact."

But a long-term effect does not mean eliminating them. Lionfish reach sexual maturity fast. Females can discharge up to 15,000 eggs every four days. They can live comfortably hundreds of feet down, beyond the range of any diver. So no one expects them to be eradicated.

"We don't even use that word any more," Akins said. "That is not on the table. They're just too deep and too widespread."