Migrants fleeing to Canada learn even a liberal nation has limits 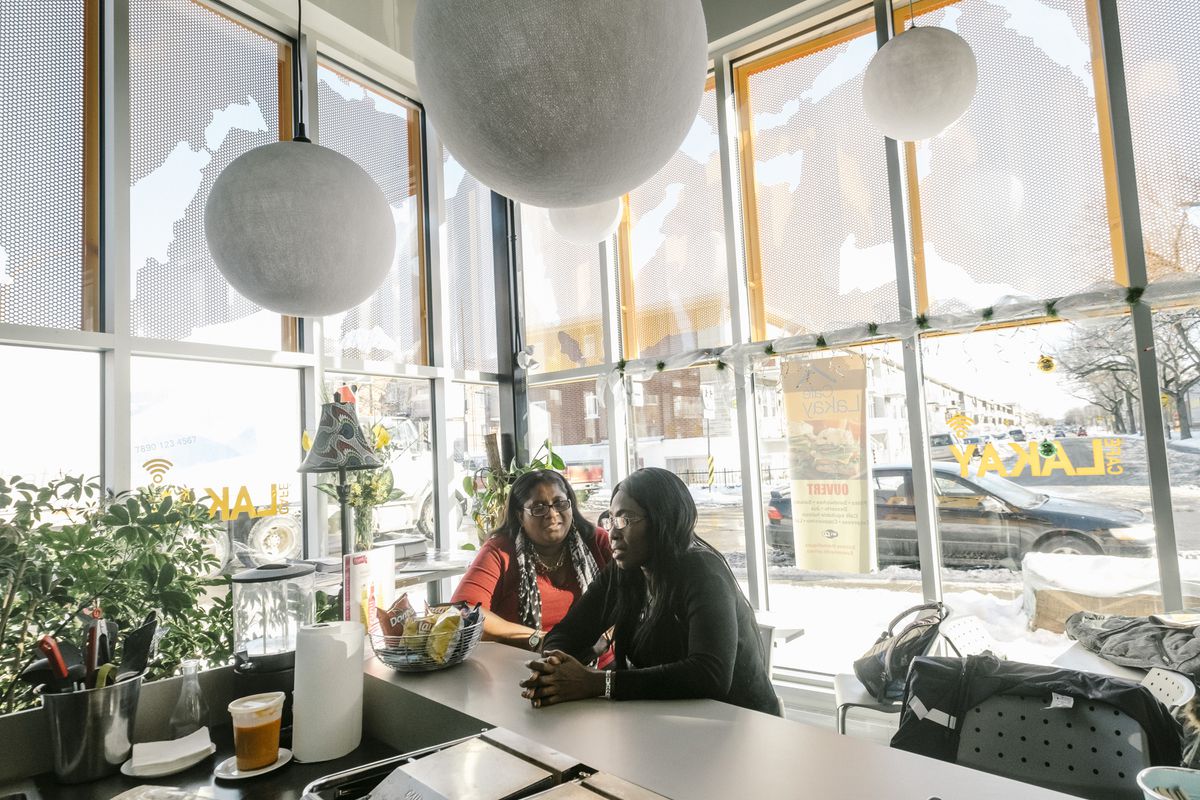 Marlise Beauville, left, and Marie Nadege, a fellow migrant, at a cafe in Haiti House, a community center in Montreal, Dec. 20, 2017. Beauville was one of a surge of thousands of Haitian migrants who crossed over to Canada last summer a May announcement by the Trump administration that Haitians would lose their temporary protected status in the U.S., granted after the 2010 earthquake that devastated their country. (Renaud Philippe/The New York Times)

Marlise Beauville, left, and Marie Nadege, a fellow migrant, at a cafe in Haiti House, a community center in Montreal, Dec. 20, 2017. Beauville was one of a surge of thousands of Haitian migrants who crossed over to Canada last summer a May announcement by the Trump administration that Haitians would lose their temporary protected status in the U.S., granted after the 2010 earthquake that devastated their country. (Renaud Philippe/The New York Times)

MONTREAL — After fleeing to Montreal from Long Island, New York, Marlise Beauville felt, she said, as if she had reached the Promised Land.

She entered the country last summer without immigration papers, yet received a work permit, a monthly stipend of 600 Canadian dollars, or $480, free health care and free French lessons. The weather has become bone-cold chilly but her Canadian neighbors are warm.

Though it is not clear that she will be able to stay, she is hunkering down, adamant that limbo in Canada is better than returning to Haiti, where she fears that the family of her dead husband will kill her. "I won't — I can't — go back to Haiti," said Beauville, a caregiver from Anse-à-Veau, Haiti, who was visiting a Haitian community center here the other day.

Beauville was one of a surge of thousands of Haitian migrants who crossed the border from the United States to Quebec last summer, spurred by a May announcement by the Trump administration that Haitians would lose their temporary protected status in the United States, granted after the 2010 earthquake that devastated their country.

The migrants were hoping to benefit from a loophole in a U.S.-Canada treaty that allowed them to make refugee claims in Canada if they did not arrive at legal ports of entry, but crossed the border illegally.

But Canadian officials are warning that even liberal Canada has its limits amid concerns, fairly or not, that illegal migration is stretching the immigration system to a breaking point and risks stoking a potential backlash.

Canada's minister of immigration, Ahmed Hussen, himself a former refugee who moved to the country from Somalia when he was 16, said Canada was proud to be a welcoming country but could not welcome everyone. Only about 8 percent of Haitian migrants had received asylum here since the summer, he said, while there is a backlog of about 40,700 cases, according to Canada's Immigration and Refugee Board.

"We don't want people to illegally enter our border, and doing so is not a free ticket to Canada," Hussen said in an interview. "We are saying, 'You will be apprehended, screened, detained, fingerprinted, and if you can't establish a genuine claim, you will be denied refugee protection and removed.' "

Canadian immigration officials are once again bracing for a possible influx of migrants heading north. On Monday, the Trump administration announced that it would not be renewing temporary protected status for nearly 200,000 Salvadorans, a humanitarian measure that had allowed them to live and work legally in the United States.

On Thursday at a White House meeting, President Donald Trump demanded to know why he should accept immigrants from Haiti and some countries in Africa, which he described in vulgar and disparaging terms. His remarks possibly further unsettled others in the United States already anxious about their precarious status.

[Trump's vulgarity: Overt racism or a president who says what many think?]

In what appeared to be an effort to dispel false hope among would-be immigrants and help stem an influx, Pablo Rodriguez, a Liberal member of Canada's Parliament who was born in Argentina, will be traveling to Los Angeles next week to meet with members of the Hispanic community there to explain the limits of the Canadian asylum policy.

On an earlier trip there, he sought to counter false media reports in the Latin American press that he said were suggesting that migrants could travel to Canada, "walk in and stay forever."

Earlier this summer, the government also sent Emmanuel Dubourg, a Liberal Haitian-Canadian member of Parliament from Montreal, to Miami's "Little Haiti" to spread the word that getting asylum in Canada was difficult. "People come here and realize that this is not the Promised Land and that they could be deported back to Haiti," he said in an interview.

Immigration is a particularly emotional issue in Quebec, a province largely made up of French speakers surrounded by an English-speaking majority, where immigrants are required to send their children to French-only schools. Quebec's Liberal government recently banned full face-veils in the province in public spaces, arguing that it encouraged the segregation of women.

In August, the number of asylum-seekers who illegally crossed the U.S. border into Quebec swelled to 5,530, a majority of them Haitians, according to Canadian government data published that month. In November, that number dropped to about 1,500 people, suggesting that cold weather and the warnings from Canadian officials were having an effect.

Many of those who travel to Canada avoid the official border, so they can circumvent the Safe Third Party Agreement between Canada and the United States, which requires asylum-seekers to apply for refuge in the country where they first arrived.

That loophole has created a political headache for the government of Prime Minister Justin Trudeau, prompting criticism that it is encouraging illegal immigration, even as refugee advocates warn that Haitian migrants could face poverty, violence or worse if they are sent back to Haiti.

Hussen emphasized that Canada was obliged to honor its international commitments under the 1951 U.N. refugee convention, which makes clear that asylum claims should be considered even if those applying use irregular means to enter a country because refugees are, by definition, fleeing persecution.

But experts say there are too few judges to adjudicate the backlog of refugee claims, which means that the asylum process for migrants like Beauville can drag on for as long as two years.

"There is a disconnect between Trudeau's hashtag 'Welcome to Canada' and the reality that the system is overwhelmed," said Michelle Rempel, a member of the opposition conservative party who is the shadow minister for immigration. "It can lead to a nationalist blowback like we have seen in Europe."

Beauville is undeterred. She said that after her husband died 15 years ago in Haiti, his family threatened her with a machete unless she handed over her inheritance. So she fled to Long Island. There, she eked out a living as a caregiver.

Life was not easy in the United States — she had left her young son with her sister back in Haiti — but at least it was better than living with death threats.

When reports that Haitians were going to be deported from the United States began to circulate in the summer, Beauville once again packed her bags. She left her home in Long Island, boarded a Greyhound bus for Plattsburgh, New York, and then took a taxi to an unofficial point along the United States-Canadian border.

When an amiable Royal Canadian Mounted Police officer warned her that she would be detained, she had her reply ready: "Please arrest me."

She was detained but not handcuffed.

"They asked how much money I had," she recalled. "They took my fingerprints, and a group of us were then taken to a YMCA for processing. I love Canada because it is an open, welcoming country. I feel I receive love here."

In Quebec, which has a small but vocal anti-immigrant far right, the reaction against the newcomers has been relatively muted. After the Haitian migrants began arriving this summer in Montreal, a smattering of protesters picketed near the city's Olympic Stadium, where some were housed.

In a Facebook post, François Legault, leader of the Coalition Avenir Québec, a right-of-center party with growing appeal, wrote that Quebec was already burdened by too many immigrants. He said Quebecers had been "shocked to see the migrants enter, many ignoring the laws, as if there was no border."

Despite such sentiments, Marjorie Villefranche, the director general of La Maison d'Haïti in Montreal, a Haitian community organization, said the migrants had been largely embraced, in part because many Haitians speak French. She said that she did not know of a single case of a Haitian asylum-seeker among the recent newcomers who had been deported from Canada, given that the appeal process was lengthy.

And while racism exists, she said, much of the animus toward immigrants had been directed at Muslims. The center recently came under criticism, she noted, when it opened its doors to refugees during Ramadan.

"The sad truth is that if Haitians were Muslim the reaction would be far different," she said.

Haitians began arriving in Quebec in the 1960s to flee the tyranny of François Duvalier, known as Papa Doc. Today, there is a Haitian member of Parliament, a senator as well as celebrated singers, Uber drivers and doctors.

Beauville hopes to join their ranks, and on a recent day she and her friend Marie Nadege, a fellow migrant, made their way to Haiti House, where a Canadian canoe-making manufacturer had come to recruit workers. As far as they were concerned, Quebec was their new home.

"I have nothing in Haiti," Beauville said. "No money. No house."

"I keep praying I can stay," she said.