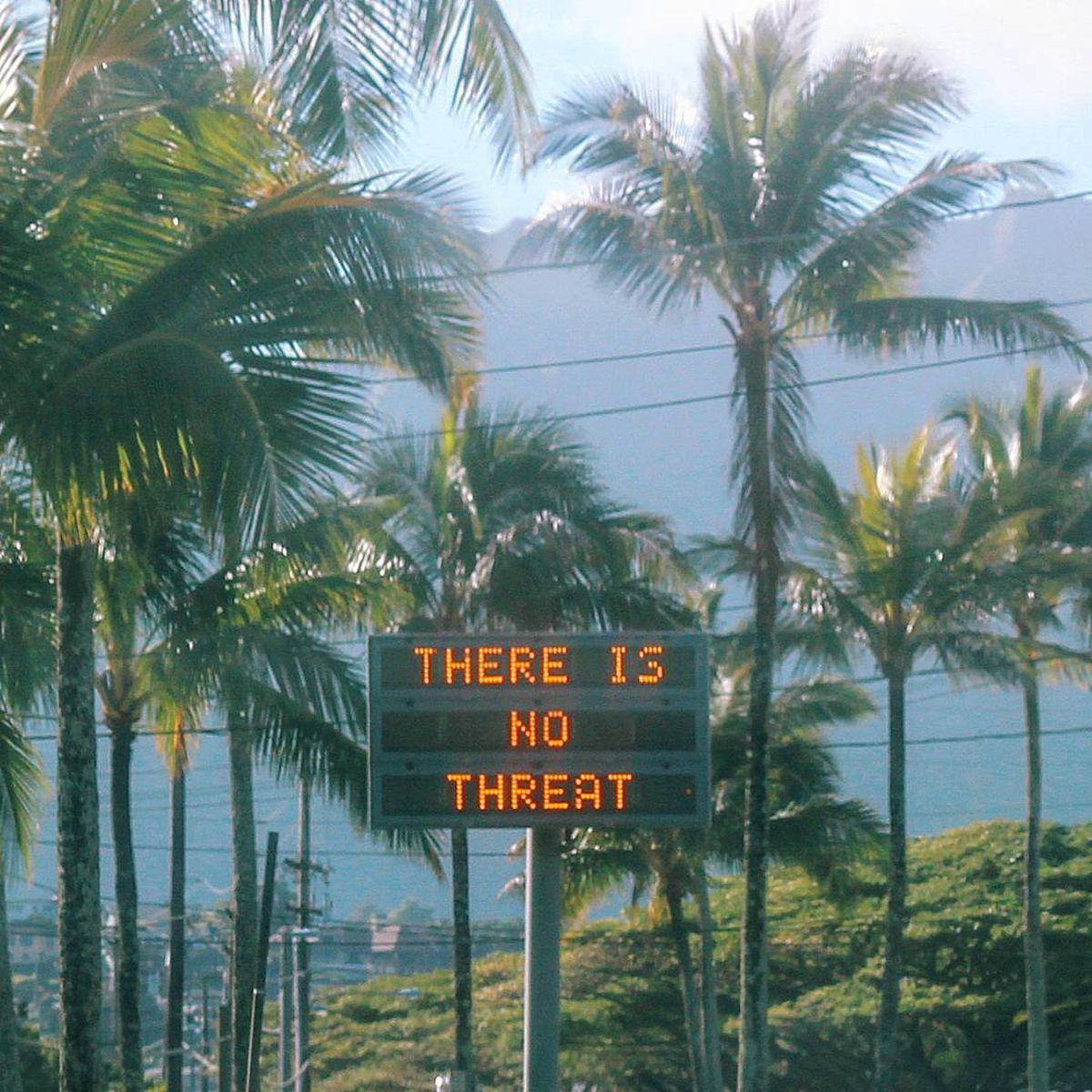 Information related to a false emergency alert is displayed in Oahu on January 13, 2018. (Instagram user @sighpoutshrug via REUTERS)

Information related to a false emergency alert is displayed in Oahu on January 13, 2018. (Instagram user @sighpoutshrug via REUTERS)

Emergency alerts sent to the cellphones of Hawaii residents Saturday warning of a "ballistic missile threat" were a false alarm, officials said. Nevertheless, the messages, reportedly sent by mistake, alarmed those in a state where fears of an attack by North Korea have been heightened in recent months.

At least 10 minutes went by with no official word or follow-up. At 8:20 a.m. local time, the Hawaii Emergency Management Agency tweeted there was no missile threat to the state.

NO missile threat to Hawaii.

The Navy also confirmed in an email to The Washington Post the emergency alerts had been sent in error.

"USPACOM has detected no ballistic missile threat to Hawaii," Cmdr. Dave Benham, a spokesman for U.S. Pacific Command, said in an email. "Earlier message was sent in error. State of Hawaii will send out a correction message as soon as possible."

At 8:45 a.m. local time, an additional alert was sent to Hawaii residents advising them that the first warning had been a false alarm.

"There is no missile threat or danger to the State of Hawaii," the follow-up alert read, according to screenshots of the message. "Repeat. False Alarm."

Wireless emergency alerts are usually dispatched during critical emergency situations and are a partnership between the Federal Communications Commission, FEMA and the wireless industry. Shortly after the false alarm, FCC chairman Ajit Pai said the commission was launching a full investigation into what happened.

[38 minutes of fear: Alaskans vacationing in Hawaii get terrifying practice run at a missile crisis]

"The public must have confidence in our emergency alert system," Hawaii Gov. David Y. Ige said. "I am working to get to the bottom of this so we can prevent an error of this type in the future."

Richard Rapoza, a spokesman for the Hawaii Emergency Management Agency, said the protocol is typically as follows: The agency receives a message on a special line from the U.S. Pacific Command saying that there is a verified threat. There's a checklist the agency goes through to make sure the alert from U.S. Pacific Command is accurate. Then a human being triggers an alarm for phone and television; a separate person triggers the nuclear warning siren – which did not go off Saturday.

On Saturday, Rapoza said someone mistakenly triggered the cellphone and television alert during a shift change.

"Someone clicked the wrong thing on the computer," he said. "It was erroneous."

"We rely on the ability of the public to believe in us. Our credibility is vital and we are going to do whatever we can to make sure this never happens again," Rapoza said. "We should have been able to cancel the alert immediately. It shouldn't have taken that long. So we are going through our processes and procedures to figure out where that went wrong."

At no time Saturday, officials said, was there any indication that a nuclear attack had been launched on the United States.

"This is regrettable and it won't happen again," said Vern Miyagi, administrator of the agency, according to the Honolulu Star-Advertiser.

Miyagi said a rule has already been put in place to mandate that two people be present before the button is pushed to alert for a drill or emergency. He also said a cancellation message template will be created for such an error scenario so a delay like Saturday's does not happen again.

Trump was wrapping up a round of golf at Trump International Golf Club in West Palm Beach, Florida, when the incident was unfolding. White House spokeswoman Lindsay Walters said Trump was briefed and that it "was purely a state exercise."

What was clear was that the erroneous alerts caused a brief panic among those who read it and expected the worst.

Courtney McLaughlin, a wedding coordinator on Kauai island, said the alerts quickly turned a serene Saturday morning into "mass hysteria" on the roads.

"My boyfriend was like, 'Who do we sue for this?' We don't just need an apology, we need an explanation. Someone could have had a heart attack," McLaughlin, 29, said. "It took something that's kind of incomprehensible and very quickly made it very personal. All of a sudden going through your mind is, 'Is this the end of my life?' I called my mom, I called my dad, I called my brother and basically said my goodbyes."

On CNN, Rep. Tulsi Gabbard, D-Hawaii, said she received the alert, called Hawaii officials and confirmed it was "an inadvertent message that was sent out."

"You can only imagine what kicked in," Gabbard told CNN. "This is a real threat facing Hawaii, so people got this message on their phones and they thought, 15 minutes, we have 15 minutes before me and my family could be dead."

Hawaii state Rep. Matt LoPresti described his family's reaction upon receiving the alert, adding that "someone should lose their job if this was an error."

"We took shelter immediately … in the bathtub with my children, saying our prayers," LoPresti told CNN.

"I was wondering why we couldn't hear the emergency sirens. I didn't understand that. And that was my first clue that maybe something was wrong, whether a hack or an error. But we took it as seriously as a heart attack," LoPresti added.

Less than two months ago, Hawaii reinstated its Cold War-era nuclear warning sirens amid growing fears of an attack by North Korea. Tests of the sirens were scheduled to be conducted on the first business day of every month for the foreseeable future. There were no planned tests for the cellphone alerts, similar to those sent out to warn of dangerous weather.

The siren tests were an audible example of the growing strife with North Korea, which has spooked other communities in the still-hypothetical line of fire. Guam distributed a pamphlet on nuclear attack preparedness that encouraged people to avoid using conditioner, "as it will bind the toxins to your hair." A 16-page bulletin released by emergency management authorities in California warned people to beware of radioactive pets.

Sen. Mazie Hirono, D-Hawaii, acknowledging the heightened tensions with North Korea, admonished the wayward message and vowed to investigate how it occurred.

"At a time of heightened tensions, we need to make sure all information released to community is accurate," Hirono tweeted Saturday. "We need to get to the bottom of what happened and make sure it never happens again."

Even as information was scarce, there were calls on Twitter for anyone who was responsible for sending the message in error to be held accountable.

Sen. Brian Schatz, D-Hawaii, said the false alarm was based on "a human error."

"There is nothing more important to Hawai'i than professionalizing and fool-proofing this process," Schatz tweeted Saturday.

There is no missile threat. It was a false alarm based on a human error. There is nothing more important to Hawai‘i than professionalizing and fool-proofing this process.

He added in a subsequent tweet: "What happened today is totally inexcusable. The whole state was terrified. There needs to be tough and quick accountability and a fixed process."

Hawaii has a population of about 1.4 million people, according to the U.S. Census Bureau, and is home to the U.S. Pacific Command, the Navy's Pacific Fleet and other elements of the American military.

The Hawaii Emergency Management Agency has been holding "are you ready" drills. As a chain of islands, Hawaii is subject to all kinds of threats — hurricanes, volcanoes, earthquakes and tsunamis — but officials have made clear that none is more urgent now than the threat of an attack by North Korea, given how little time there would be between an alert and the detonation of a warhead.

The fifth page of an emergency preparation pamphlet issued by the Hawaii Emergency Management Agency features a picture of a rocket lifting off: "Nuclear Threat — Unlikely But Cannot Ignore It."

Miyagi, the administrator of the agency, said that during the drill, an employee — whom he did not identify — mistakenly pushed a button on a computer screen to send out the alert, rather than one marked to test it. He said the employee answered "yes" when asked by the system if he was sure he wanted to send the message.

Miyagi, going through a detailed timeline of the events at an afternoon news conference, said the agency tried to correct the error on social media. It took 38 minutes to send out a follow-up message canceling the original alert, which he acknowledged was a shortcoming with the alert system that the agency would fix.

Rapoza said he did not know if anyone would be disciplined for the mistake. "At this point, our major concern is to make sure we do what we need to do to reassure the public," he said. "This is not a time for pointing fingers."

The panic that followed the alert — if relatively short-lived — gripped the islands. There were reports of people seeking shelter by parking their cars inside a highway tunnel that cuts through a mountain. When the announcement was rescinded, a digital highway sign read: "Missile alert in error: There is no threat."

Others reacted nonchalantly to the alerts. More than two dozen vacationers had just departed from the town of Lahaina in Maui on a morning whale-watching excursion when their cellphones sounded with the alarm that a ballistic missile was inbound and to "seek immediate shelter."

The captain, calmly and almost cheerily, announced he was turning around the catamaran, without describing the precise threat.

"I think we might be better out there," the captain said, pointing out to sea. "But my boss said we should return and seek shelter."

Back on shore there was not panic, but mainly vacationers and others wondering why there was no immediate coverage on restaurant televisions or local radio.

Compiled from The Washington Post, Reuters and The New York Times.