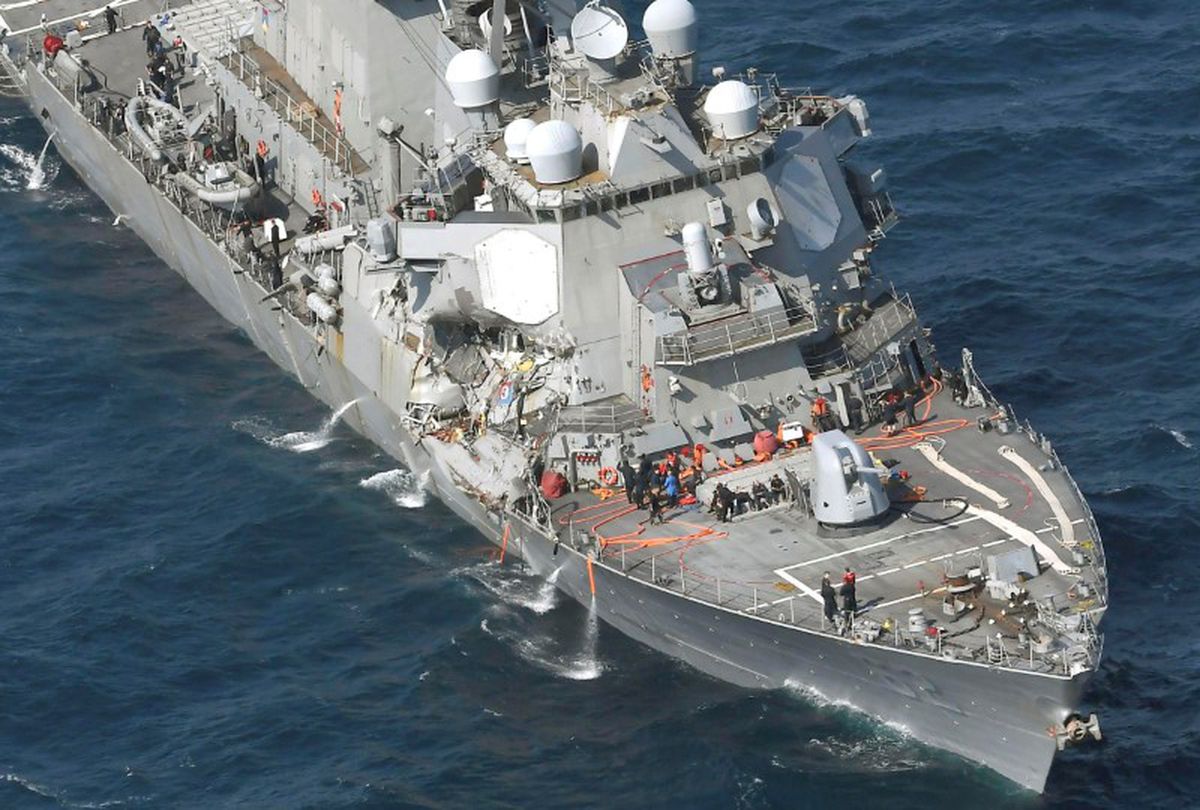 The Arleigh Burke-class guided-missile destroyer USS Fitzgerald, damaged from a collision with a Philippine-flagged merchant vessel, is seen off Shimoda, Japan, on June 17, 2017. (Kyodo/via REUTERS)

The Arleigh Burke-class guided-missile destroyer USS Fitzgerald, damaged from a collision with a Philippine-flagged merchant vessel, is seen off Shimoda, Japan, on June 17, 2017. (Kyodo/via REUTERS)

The individuals include Cmdr. Bryce Benson and Cmdr. Alfredo Sanchez, the former captains of the USS Fitzgerald and USS John S. McCain, respectively. The Fitzgerald collided off the southern coast of Japan with a larger vessel on June 17, killing seven sailors, while the McCain struck another ship Aug. 21 near Singapore, killing 10.

Three other officers aboard the Fitzgerald also will face charges, said Navy Capt. Gregory Hicks, a service spokesman. The service did not identify them by name Thursday, but they include two lieutenants and one lieutenant junior grade. They and Benson face charges of negligent homicide, dereliction of duty and hazarding a vessel.

Sanchez faces the same three charges in connection with the McCain accident, Hicks said in a statement. In addition, the Navy is examining one charge of dereliction of duty against a chief petty officer, a senior enlisted leader on the ship.

Separately, the service also is moving forward with administrative discipline for four other members each from the Fitzgerald and McCain, Hicks said.

The potential courts-martial are the latest fallout to the collisions, which shocked the Navy, prompted congressional hearings and have left the service short two $1.8 billion destroyers. Navy Adm. John Richardson, the chief of naval operations, has promised that the service will get back to basics and emphasize the fundamentals of good seamanship.

The service announced in November that it had found through internal investigations that both catastrophes were preventable and occurred due to multiple failures by service members who were standing watch the nights of the accidents.

Richardson disclosed at a Pentagon news conference Nov. 2 that he had assigned Adm. James "Frank" Caldwell to serve as a consolidated disposition authority for legal cases related to the collisions. The term defines a senior officer who oversees cases that can be both criminal and administrative in nature.

The service already had removed numerous people from their jobs as a result of the collisions, including Sanchez and his second-in-command on the McCain, Cmdr. Jessie Sanchez. On the Fitzgerald, the Navy removed Benson, Cmdr. Sean Babbitt, the ship's No. 2 officer, and Command Master Chief Brice Baldwin, its senior enlisted sailor.

The Navy's senior officer overseeing surface warfare, Vice Adm. Thomas Rowden, also is expected to step down this week ahead of a recommendation that he be removed, Defense News reported Tuesday.