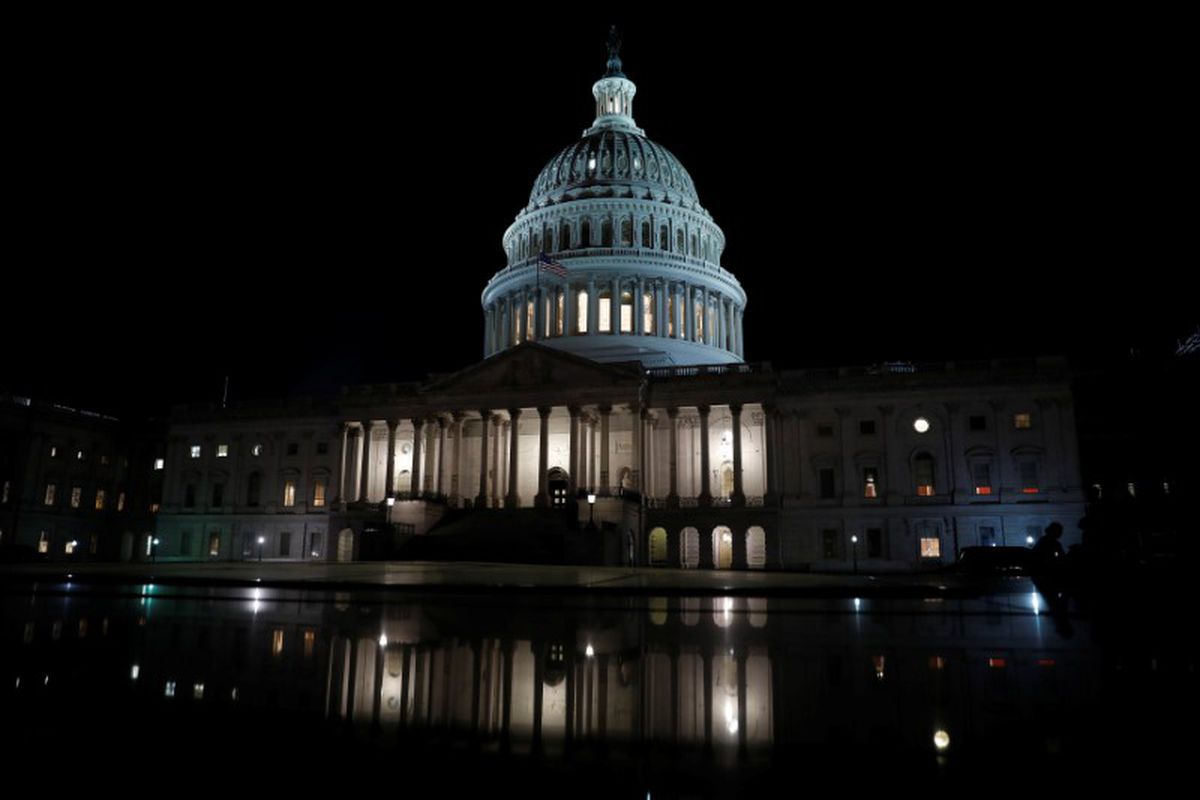 WASHINGTON – As the federal government prepared to shut down late Friday, massive confusion spread throughout the bureaucracy as senior Trump administration officials painted radically different scenarios of whether basic governmental functions would continue or halt.

Defense Secretary Jim Mattis said about half of the Pentagon's civilian employees would be sent home without pay, maintenance would cease and some intelligence operations overseas would stop. The Commerce Department sent talking points to managers, instructing them to tell furloughed employees to set up out-of-office voice-mail messages and take their office plants home. The Internal Revenue Service braced to lose more than half its workforce just as employees are answering questions about the new tax law.

But at the Environmental Protection Agency, Administrator Scott Pruitt told his roughly 15,000 employees to report to work Monday as if nothing would change, a direct contrast to the plan officials finalized last month suggesting that thousands of employees would be furloughed in the event of a shutdown. And Secretary of State Rex Tillerson plans to leave Monday for a trip that will take him to Europe for bilateral talks in Paris, London and Warsaw. His schedule includes a stop for the World Economic Forum at the swanky Swiss resort of Davos, where he is to meet up with President Donald Trump.

The disconnect highlighted the clash between the White House's determination to keep the government as functional as possible and a vast workforce that typically scales back when its congressional appropriations expire.

[What does a federal shutdown mean for Alaska?]

In a briefing with reporters Friday evening, senior administration officials could not identify how many federal employees would be furloughed and how many agencies would be affected, referring questions to individual departments. Contingency plans drawn up in recent years called for high-percentage furloughs of civilian employees, including 78 percent of those at the Defense Department and 83 percent at Labor.

Administration officials acknowledged that many federal employees were not notified until Thursday or Friday that they could be affected, much later than would be typical. In 2013, more than 800,000 federal employees were sent home without pay for 16 days. The reason many weren't given more advance warning this time is because senior administration officials said they didn't realize the shutdown threat was real until days ago.

Budget director Mick Mulvaney told reporters at the White House on Friday that a shutdown – the first under Republican control in Washington – "will look very different than it did under the previous administration," which he said deliberately exacerbated public impact.

Mulvaney said the administration was working to blunt a shutdown's effects by pushing agencies to use different accounts that might allow them more flexibility to pay employees, though it is unclear exactly how that would work. And it did not appear that the government's largest agencies, particularly the Defense Department, would be able to take advantage of such a tactic.

Pruitt told EPA employees late Friday that the agency could continue operating through all of next week even if spending expires. At the Interior Department, officials have gone to extraordinary lengths to keep things running, promising to keep open as many parks, national monuments and other public lands as possible – without visitors centers and with a skeleton staff of law enforcement.

The government will spend about $4.1 trillion this year, and roughly 30 percent of that is appropriated each year by Congress. Roughly half of that money goes to the military, and the other half to dozens of federal agencies. When there is a shutdown – in this case a partial one since lawmakers have passed a budget for the Veterans Health Administration – the government doesn't grind to a halt, but its operations are interrupted. Many employees deemed "essential" to the agency's day-to-day mission remain in their posts, often without pay, while others are sent home indefinitely.

Agencies typically don't stockpile money to prepare for these types of lapses because they're not supposed to. Some officials said they could maintain operations by using carry-over funding, money that remains unspent and is either part of permanent or multiyear appropriations.

It was unclear how this strategy differed from the approach the Obama administration invoked in 2013, when Sylvia Mathews Burwell, then the director of the Office of Management and Budget, issued a Sept. 30 memo instructing heads of agencies that they could "continue to operate under such previously approved apportionments" from those buckets of funding.

OMB officials wouldn't specify which agencies had access to this money or how it would work, though they said they place greater "emphasis" on using these funds compared to 2013. And as late as Friday night, the White House could not say which agencies would continue to operate either fully or partially.

Sam Berger, who served as OMB senior counselor and policy adviser during the 2013 shutdown, said this funding strategy helped Veterans Affairs and the State Department stay open during the 16-day budget impasse.

"The Obama administration's sole focus was on making sure agencies complied with the law," Berger said. "And agencies made determinations about the best way to utilize their funding consistent with the law, including the use of multiyear carry-over funding when appropriate."

But some budget experts questioned whether allowing agencies to pay employees with unused money or transfer money into salary accounts would be legal after the midnight deadline.

"What the administration is doing here is using an accounting trick to keep parts of the government open, and then it's not a shutdown at all," said Bill Hoagland, senior vice president at the Bipartisan Policy Center and a former budget adviser to several Senate Republican leaders. "I would question the legality of using those moneys when you have no authority at all to spend money."

If agencies were to stay open using the White House strategy, he added, "You're going to have budget lawyers working overtime and potentially with lawsuits."

Questions about this frenzy of activity – such as whether agency heads would need to move their money before midnight Friday – contributed to a sense of chaos as the Trump administration encountered its first bureaucratic fiasco. Trump and his deputies continued to attack Democrats on Capitol Hill even as they negotiated with them and downplayed the potential mess that could ensue.

Employees not scheduled to work over the weekend – the vast majority of the government – were told to come into work Monday morning to put things in order for an indefinite absence, leaving their government-issued cellphones and laptops at the office. No telework is allowed during a shutdown.

The next pay period for many employees runs through Jan. 26, and they will be paid for work through this past week.

Tony Reardon, president of the National Treasury Employees Union, which represents 150,000 federal workers at more than 30 agencies, told reporters at 2 p.m. that "our employees right now at this late hour are still waiting to get their notices." He said they worry that Congress will not ensure that they are paid after a shutdown ends, even though Congress has voted to pay them after previous shutdowns.

After reporting Friday that more people sought care for flulike illnesses during the second week in January than at any comparable period in nearly a decade, the Centers for Disease Control and Prevention had prepared to send more than 60 percent of its employees – about 8,500 people – home. CDC spokeswoman Kathy Harben said the agency's "immediate response to urgent disease outbreaks, including seasonal influenza, would continue," through an analysis of data being reported to the government from state and local authorities and hospitals. But experts said the diminished staff levels could slow the rate of analysis.

The architects of the recently passed Republican tax law are relying on the tens of thousands of IRS employees to turn their new vision for the tax code into reality. But the agency was preparing to send home about 56 percent of its workforce, according to Treasury officials.

A prolonged impasse could affect the pace at which IRS attorneys can issue new guidelines to resolve legal questions the law raises and to implement computer updates to IRS software for processing tax forms, tax experts said.

A shutdown would halt key rail, airline and other investigations, according to the National Transportation Safety Board, which said 95 percent of its more than 400 employees would be furloughed.

Among the work that would stop: Investigations into an Amtrak derailment near DuPont, Washington, in December that killed three people, and into a near miss at San Francisco International Airport in July, when an Air Canada flight nearly landed on the wrong runway, according to the NTSB.

At the State Department, consular offices abroad would continue to process visas, so long as the fees they generate pay for the cost. Ambassadors would continue meeting government officials around the world. Travel would be curtailed, but is allowed to proceed if the trips are for national security purposes, including negotiating treaties and attending bilateral meetings, or to save lives, as in the case of medical emergencies or providing refugees with food and medicine. Many training courses will be suspended, except for classes related to diplomatic security, anti-terrorism and preparing government employees to go to dangerous postings such as Afghanistan and Iraq.

Furloughed employees across the government will be advised to turn off their cellphones and have no email communications with colleagues who continue to work. They are prohibited from using social media accounts and virtually all public speeches are forbidden. A skeletal team of public affairs spokesmen will be working to communicate with the media, but they are only allowed to discuss issues pertaining to national security.

The National Park Service issued a contingency plan Friday evening that outlined how park access would be maintained to the greatest extent possible under a shutdown, even as buildings would be locked and visitor services would cease.

At Big Cypress National Preserve in Florida, some of the buildings could shut as soon as Saturday, though much of the park's 760,000 acres will remain open to visitors. The park is home to many large alligators and pythons, and there will not be as many park rangers working to enforce safety precautions.

"We are going to put some information out that encourages people to use extra caution," spokeswoman Ardrianna McLane said.