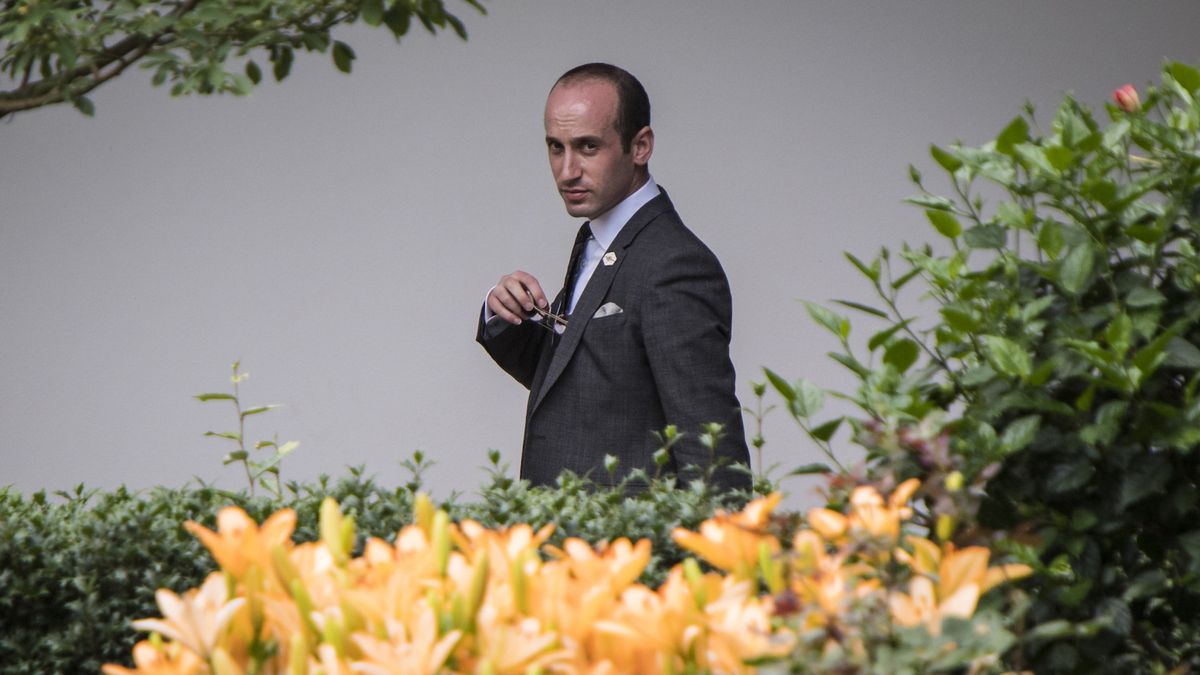 WASHINGTON – Stephen Miller, one of the few remaining original advisers to President Donald Trump, invited a small group of writers and editors from Breitbart News to the White House last fall for a conversation on immigration. The conservative news website – headed at the time by another former White House adviser, Steve Bannon – has been a steadfast cheerleader for Trump and his nationalist anti-immigration agenda.

But Miller's goal on this occasion was to sell the group on a compromise: a possible deal offering protections to the young undocumented immigrants known as "dreamers" in exchange for tougher immigration provisions, such as an end to family-sponsored migration.

The discussion quickly turned into a shouting match – an expletive-laden "blowup," according to one person familiar with the gathering. Another person described it as "just a fundamental disagreement within the movement."

The combative conversation illustrates Miller's influential yet delicate role within the administration – a true believer in restrictionist immigration policies attempting to broker a historic deal on behalf of a president with similarly hawkish, but far more flexible, positions. Miller has also proven to be a rare, behind-the-scenes survivor in a White House roiled with firings and resignations over the past year.

Now the 32-year-old former Senate aide is at the center of the fiery Washington battle over what to do about the dreamers, whose protection under the Deferred Action for Childhood Arrivals program will soon be rescinded by Trump and whose cause has been taken up by Democrats. Miller was among those in the Oval Office earlier this month when Trump raged about accepting immigrants from "shithole countries" – an episode that set back bipartisan talks over the budget and immigration and helped propel the government to a partial shutdown this past weekend.

Miller has come to be widely viewed – unfairly, White House officials argue – as something of a puppeteer, helping to shape and scuttle deals for a president who doesn't understand, or care to understand, the details.

On Sunday, Sen. Lindsey Graham, R-S.C. – whose doomed immigration compromise with Sen. Richard Durbin, D-Ill., was the target of that Trump tirade in the Oval Office – blasted Miller as a primary reason for the continuing standoff over border issues.

"As long as Stephen Miller is in charge of negotiating immigration, we are going nowhere. He's been an outlier for years," Graham told reporters at the Capitol. "I've talked with the president; his heart is right on this issue. He's got a good understanding of what will sell. And every time we have a proposal, it is only yanked back by staff members."

The reality, though, is arguably more complicated.

Mark Krikorian, executive director of the Center for Immigration Studies, said Trump has hawkish immigration views on a gut level but doesn't necessarily understand all of the policy details and implications. He said Miller and Chief of Staff John Kelly – who also plays a crucial role in immigration policy – are "not so much yanking the president's leash" as doing "the proper job of staff" by steering the president to his goals.

"There was a story line that people were developing in their own minds that Miller is the source of evil and without him everything would be great," Krikorian said. "The truth is the president is committed to this general perspective on immigration, and Miller and Kelly are there to help him implement what he always wanted to do."

Miller's driving obsession is immigration, an area where he has long pushed hard-line positions going back to his days as a combative conservative activist at Duke University. In Washington, as an aide to then-Sen. Jeff Sessions, R-Ala., he was instrumental in helping to kill a bipartisan effort in 2013 for a broad immigration deal. He and Sessions helped galvanize House conservatives to block the bill passed by the Senate, including distributing a handbook of talking points aimed at undercutting the compromise.

Now working in the White House, Miller – known for his natty attire, long-winded conversations and distinctive heavy-lidded appearance on television – has told colleagues that his "consuming focus is to make what I know the president wants in an immigration deal a legislative reality," a senior White House official said. He has few hobbies outside of work, and his spacious second-floor West Wing office is sparsely decorated, with a stack of "Make America Great Again" hats and invitations to inauguration events framed on the wall.

The official said Miller chats frequently with the president about immigration, both formally and informally, during scheduled meetings, on board Air Force One, after bill signings in the Oval Office and during rides in the presidential motorcade. He speaks often of Trump with reverence, a stark contrast to some eye-rolling aides.

Miller – who declined requests for an on-the-record interview – tells others that Trump has two main goals when it comes to immigration policy: to move from a low-skilled or unskilled immigration system to a merit-based, high-skilled one and to ensure that the nation's immigration laws are enforced, including tougher measures along the southern border.

At times, he has also been forced to forgo his more restrictionist beliefs for Trump, whose declarations on the issue have veered from cheering a border wall to expressing occasional sympathy for dreamers.

In early November, Miller invited Krikorian and a group of like-minded conservative allies to the Eisenhower Executive Office Building in an effort to garner support for a White House immigration bill. But Miller, whom many of the attendees considered an ideological peer, was not as warmly received as he would have liked, an administration official said.

Much like the Breitbart meeting, Miller found himself urging the group to allow the sorts of concessions for dreamers that they have been fighting against for years in return for systematic changes to the legal immigration system, like stronger enforcement measures and ending family preferences.

"Be a possible 'yes,' be open to doing something that makes you very uncomfortable on DACA in exchange for substantive structural reforms that may have been out of reach," a senior White House official said, summarizing Miller's pitch on the condition of anonymity to share details of a private moment. "That's the whole game."

Outside the White House, he is viewed warily by many, particularly those on the left.

In September, Senate Minority Leader Charles Schumer, D-N.Y., and House Minority Leader Nancy Pelosi, D-Calif., left the White House and announced with great fanfare that they had reached a DACA deal with Trump – protections for the dreamers in exchange for a border security package that did not include funding for a wall at the southern border.

It fell to Miller to calm angry and anxious Republicans who reached out to him. Miller was also upset, according to a person who spoke to him, and even apologized for what happened – a claim that a White House official denied.

But he also told Capitol Hill aides to take a deep breath, assuring them that Trump had not changed his position, a senior White House official said. Trump later backed away from the agreement and claimed the Democratic leaders had misrepresented it.

After the incident, one Republican Hill aide said there was a sense that Miller was going "rogue." At the time, he sent a "Stephen Miller wish list" of trade-offs for a DACA deal to Republican aides – largely requests that would be non-starters for Democrats – although the list got longer and more strident after the Homeland Security and Justice departments weighed in, a senior administration official said.

More recently, he was accused of helping persuade Trump to backtrack on the Durbin-Graham immigration proposal over a roughly two-hour period on Jan. 11, from when Graham and Durbin spoke with Trump in the morning to when the duo arrived at the White House at midday. They found Trump surrounded by conservatives such as Sens. Tom Cotton, R-Ark., and David Perdue, R-Ga., and so angry that he not only rejected their plan but also dismissed immigrants from Haiti and African countries in profane terms.

Durbin and Graham blamed Miller for inviting the hawkish members of Congress, but the decision was Trump's idea and Miller was not even in the Oval Office when Trump extended the invitations, two White House officials said. Several leadership aides who were previously critical of Miller also say he has been a more constructive force in the recent immigration talks.

"Stephen Miller is an impassioned advocate for President Trump and his agenda and he is respected by all at the White House," White House communications director Hope Hicks said in a statement. "Stephen is equal parts talent and intellect, but he is also a person with great heart and an unparalleled work ethic."

Within the White House, Miller is especially close with Kelly, who is frequently aligned with both Trump and Miller's views on immigration. Before moving to his current chief of staff role, Kelly served as the Department of Homeland Security secretary, when he and Miller spoke several times a week about immigration and border policy.

Miller also attempted to shift some portfolio items, such as refugee numbers, from the State Department to DHS because he trusted Kelly more than Secretary of State Rex Tillerson to handle them.

Kelly has told a number of other aides that he trusts Miller on immigration. White House officials say Miller – who hopes to work in the West Wing for the entirety of Trump's presidency – has made a point of working within Kelly's organizational structure.

But some inside the administration also view Miller as an opportunist. At one point when he was still at the White House, Bannon, a frequent ideological ally of Miller's, found himself on the outs with the president and his son-in-law, Jared Kushner. When Trump solicited Miller's opinion on Bannon, Miller told the president that he believed Bannon was leaking to the media and that he would be doing much better without him, said two White House officials with knowledge of the incident.

And when Sessions, who is now Trump's attorney general, got crossways with the president over his decision to recuse himself from the Russia probe, Miller did not defend his former boss and mentor. He did not believe it was his role or helpful for him to do so, a senior administration official said.

The president, meanwhile, is fond of Miller's combative style and sees him as a difficult person to replace because of his speechwriting abilities, current and former aides said. Trump has complimented Miller for standing his ground in a fight with Tillerson, two people with knowledge of the praise said. Trump also told aides that he prefers Miller's approach over that of Johnny DeStefano, another West Wing aide who was more deferential to Tillerson in a fight over personnel, two White House officials said.

More recently, the president offered a tweet of support for Miller after he and CNN host Jake Tapper got into a heated debate on "State of the Union," when Miller strongly defended Trump from allegations in a controversial new book by Michael Wolff. The appearance ended with Tapper cutting the segment short followed by an off-camera shouting match. Miller told colleagues the show went well and he wouldn't have changed a thing.

Miller frequently reads Breitbart and, early in the administration, was spotted carrying a pile of Breitbart articles into Bannon's office. White House aides said Miller was a prime supplier of Breitbart clips to Trump. He also takes personal pride in successfully pitching stories to the site, associates say.

Earlier this year, he showed up at a Capitol Hill townhouse known as the "Breitbart Embassy" for a book party for conservative commentator Laura Ingraham, drawing murmurs from the crowd. After briefly talking with Bannon and Ingraham, Miller retreated to the kitchen, where he snacked on desserts away from the limelight – just as he prefers to be.