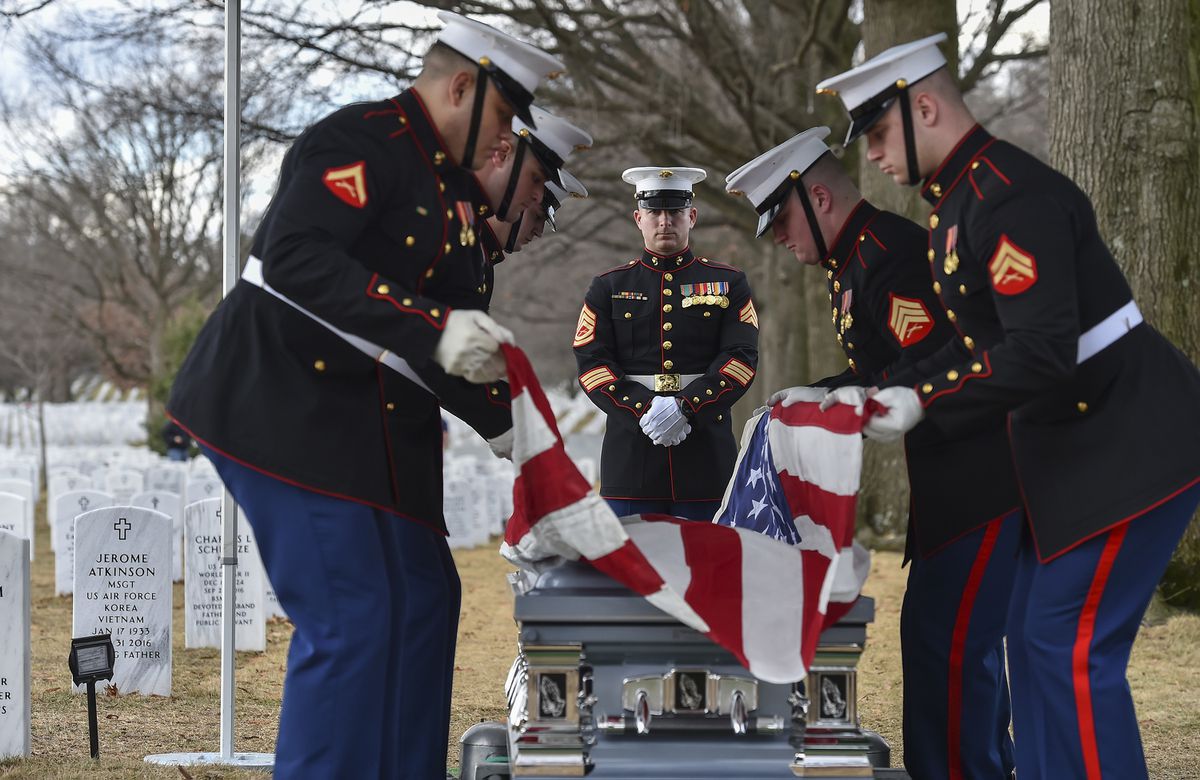 The forecast had called for rain, possibly strong thunderstorms to roll through the region. But as 50 or so people gathered at Arlington National Cemetery on Tuesday afternoon to say goodbye to retired Marine Master Sgt. Catherine G. Murray, not a single drop of rain fell.

Some may have called the clearing skies a miracle. But Murray, the first enlisted female Marine to retire from active duty, would have described it using her favorite word: "providential."

"Everything that would happen, she would say, 'That's providential,' " said Mark Adkins, Murray's caretaker and companion of 22 years. "She believed that God was looking out for her."

Murray, who lived to be 100 years old, died Dec. 20 at her home in Fort Lauderdale, Florida, with Adkins by her side.

She was a fierce supporter of the Marines until the day she died, Adkins said. Murray served for nearly 20 years after enlisting in 1943.

"I thought it was the best," Murray said in a February 2015 YouTube video filmed by Adkins. "I still do."

As the youngest of three children and the only girl, Adkins said, Murray was determined to defy gender norms and "create her own identity."

She was driving home from church on Dec. 7, 1941, when President Franklin D. Roosevelt announced the attack on Pearl Harbor.

Without telling her family, Murray decided then to enlist in the Marines, Adkins said.

In the 2015 video, Murray said she passed both physical and aptitude tests, and "before you knew it," she was on a train headed for boot camp in New York.

"I didn't ask my mother, or my brother or my aunt what they thought; I went ahead and did it," Murray said. "After the die was cast, I called them and I said, 'Momma, I am now a United States Marine.' "

Murray was one of 50 women who were retained on active duty after World War II, said Eileen Skahill, Murray's friend and national chaplain with the Women Marines Association.

During her career, Murray was stationed in 15 duty stations, including London, Hawaii, the District and Quantico, Virginia, Adkins said. Her tasks ranged from secretarial duties to driving five-ton trucks, he said.

At Quantico, Skahill said Murray was responsible for writing many of the directives and manuals for training female Marines.

Although she was surrounded by men, many of whom were her superiors, Adkins said Murray never stopped championing women's rights and equality.

In another YouTube video posted in May, Murray recounted listening to two male colonels talking about the Marines' achievements and giving all the credit to men.

"Finally, I had it up to here in their conversation," Murray said.

She told them to remember there were 18,000 female Marines, adding that "as a matter of fact, you wouldn't even be here if it wasn't for some woman."

['The last to let you down': These are the Marines who carry their own to burial]

In the 2016 presidential election, Adkins said, Murray voted for Hillary Clinton, saying it was "high time for a woman to be president."

Murray was an avid volunteer who made sacrifices to help not only her family but also strangers, Adkins said.

"She felt that was the way you served God, by serving one another and by contributing to the world," he said.

During Tuesday's ceremony, Murray was remembered for her unyielding service, most notably her work at Holy Cross Hospital in Fort Lauderdale, where she logged more than 48,000 hours as a volunteer.

On her way to the hospital, Adkins said, Murray would pick up people waiting at the bus stop and drive them where they needed to go.

Maria Curran, 60, who took her first steps in Murray's Florida home, said the retired Marine never turned down any opportunity presented to her.

"If you asked her to do anything, she was like, 'Let's go,' " said Curran, who traveled from Richmond, Virginia, to attend the service.

Despite a century's worth of life experiences, Adkins said, Murray's career in the Marines was the "highlight of her life." She wanted to be buried at Arlington alongside her fellow Marines and others who served the country instead of with her family because "Marines were her family too," Adkins said.

Murray had outlived all of her biological family, but on Tuesday both active and retired Marines gathered to say farewell. Adkins wiped tears from his eyes while he watched the woman he had come to regard as his best friend laid to rest in a position of honor and respect.

"We did her proud," Skahill said. "I am so pleased that we were able to make the presence that we did today."

While attendees milled about after the service, chatting among themselves or paying their final respects, Adkins continued to care for Murray as he quietly rearranged the roses atop her blue-gray casket after gusts of wind knocked some to the ground.

"The last act of kindness that I can do is to walk through this journey with her until the end," Adkins said.

As cars departed the cemetery and Murray's casket was left alone under a tent, the first drops of rain began to fall.