An addict dies in a New York school restroom. He was a teacher. 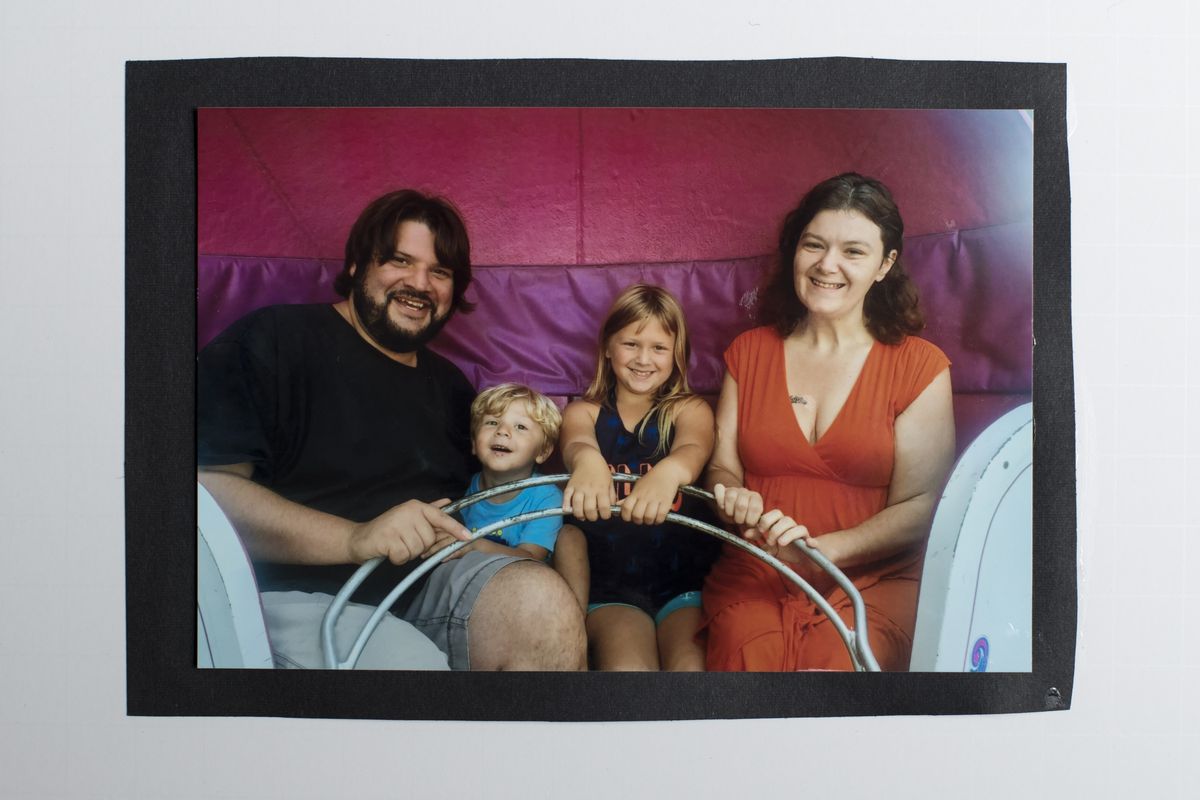 Matthew and Rachel Azimi with their children Charlie and Violet. (Rachel Azimi via The New York Times)

Matthew and Rachel Azimi with their children Charlie and Violet. (Rachel Azimi via The New York Times)

NEW YORK — The needle was so small beside the big man.

The police looked around the body in the bathroom stall, hoping to find telltale details that might lead to the supplier of the drugs that killed him. They examined the little plastic envelope on the floor, emptied in the man's final actions, for any identifying markings.

No luck. The envelope was clean. The syringe the man had used to inject the drugs was new, the receipt from a nearby pharmacy in his pocket.

Matthew Azimi, 36, had overdosed, not in an abandoned house or a dank basement, but in a faculty restroom at a special education high school in the Bronx. He taught there. His students, some of them severely disabled, had just been dismissed for the day.

His story does not neatly fit into the addict's narrative. Unprecedented numbers of men and women have fallen to the opioid epidemic in this country, rotating in and out of hospitals, treatment centers and jails, brought back to life by doses of Narcan, only to overdose again. Less common is a story like Azimi's, one with virtually no warning signs, evading detection by sharp-eyed colleagues in an epicenter of addiction in the Bronx. Those closest to him missed or misread the physical cravings that he hid well.

The cause of death, on Nov. 30, was marked by the medical examiner's office as an overdose of fentanyl, the potent synthetic additive that dealers mix with heroin.

[An addict's life on Anchorage's streets – and a mother's unwavering love]

In the bathroom at Public School X811 that day, officers continued looking for clues surrounding his death, but instead found articles of a full and vibrant life. There were the keys to Azimi's car parked outside, the one he drove to work each morning, leaving the Putnam County town of Carmel by 6 a.m. for a commute that could take more than an hour. His house in Carmel was warm and worn, with a heap of toys visible through the windows on the porch. There were two children, 8 and 4, a girl and a boy.

On his left hand was a wedding band. His bride, Rachel Azimi, had pushed it up over his knuckle on their wedding day almost 10 years ago. In recent weeks, she had been ill, pregnant with their third child.

Azimi had texted her just that morning: "These next few months will probably be difficult because I know you're sick. Everything is going to work out and we're going to have a good future." By nightfall that day, she would be frantic, calling her husband 37 times with no response. A strange car would pull up to the house as midnight approached. Police detectives.

Some addicts die in plain view, their years of drug use ravaging their bodies and upending their lives, like a long siege. Azimi's addiction was more like a sleeper cell. It took seed as a teenager, and those around him sought to stomp it dead, but it loomed, largely dormant. It hid behind the broad smile he flashed for photographs, the ones of the family man with the house and the yard.

"I believed he was sober for the vast majority of our marriage," Rachel Azimi said. "I never saw drug paraphernalia. I don't even know what heroin looks like."

He shared his past addiction sparingly to new friends, telling them only some of his troubles as a teenager in Bedford, when he began drinking and using drugs.

His parents had taken a decisive measure to end the habit, sending him to a small alternative high school two hours away in Hancock, called the Family Foundation School. The school sought to curb bad behavior by limiting student contact with the outside world and exacting what alumni described as a system of punishments that could be severe. Azimi was there from 1997, when he was 16, to 2000. The school closed in 2014.

A classmate there, Christopher Lont, 35, befriended Azimi, and the two stayed in touch. Lont said his friend came to define himself as the substance user he had been when he was a young teenager, an identity that never wavered: "'I have this problem,'" Lont recalled him saying. "'This is my problem. I'll never get over this problem.'"

Azimi would prove himself right. While in his 20s, he returned to his native Brewster and began hanging around with fellow former classmates. Someone introduced heroin into the mix, said Grace Cole, 35, a friend from the Hancock school.

Azimi was living with his father and mother. "She'd call me when Matt would vanish," Cole said of his mother. "She would be flipping out on the phone: 'He showed up last night in his bare feet and can't find his car. He thinks it's in the Bronx, but he can't remember driving there.'"

Then he seemed to straighten up again. He wanted to teach. He told friends he had a plan. "Being happy meant being married, having kids, the white picket fence," Lont said.

Cole remembered the urgency in this goal. "'I want to get married,'" she remembered Azimi telling her. "'It has to happen as soon as possible, and I want kids. I want it now.'"

He created a profile on the dating site Match.com and met a young woman named Rachel Marbach in 2007. She grew up in nearby Somers, and worked as an obituary writer at the local paper. They quickly hit it off. He spoke of his past drug use. "I never knew anyone who had a problem with that," she said.

They married months later, in 2008, and the following year their daughter, Violet, was born. They settled in Carmel in a house with a pool. He seemed to be checking off his goals toward happiness.

He got a job at Public School X811 in Foxhurst in the Bronx in 2010, teaching disabled students ranging in age from 13 to 21.

"My students are kind and respectful," he wrote on a fundraising site he used for new supplies in 2015 and 2016. "My students are learning important independent living skills as well as having exposure to the general education common core curriculum. My goal as a special educator is to help my students live independently."

He began a horticulture program that taught students to grow food in a garden, a narrow spit of grass and dirt between two buildings that saw practically no sunlight, and sell it at a farmers market.

"He and the other horticulture teacher would be out there in the rain getting these things planted," said Daniel Marquart, 53, a friend and teacher at the school.

After school, for extra money, Azimi worked the pickup line, assisting students, many in wheelchairs, board the proper school bus to take them home. Students liked him. "I used to call him the pushover," said a colleague who asked that her name be withheld out of sensitivity to the Azimi family. "He was so kind, he would always be the good cop. He couldn't say no to a kid."

Friends speak of Azimi in this way today, sharing moments from what looked like a happy life. He played guitar for his students before dismissal. He was set to perform in the upcoming winter talent show. He spoke with pride of the daughter he and his wife were expecting in March.

Then he died on the bathroom floor. Before the funeral home closed the lid on his coffin, his wife tucked an image from the baby's latest sonogram inside.

He left those who knew him to reconcile the death with the life, to find hints in hindsight.

Marquart, who had lunch with Azimi twice a week, said his friend never mentioned drugs or his history. "Lately he would complain that he was hot," he said. "We would be eating and he would start to sweat. He's a big guy, and I didn't think about it."

Two weeks after his death, his wife sat at their kitchen table. Christmas was approaching, and family and friends had come together to buy gifts for the children. She thought of their years together and looked in vain for signs. "The wife is the absolute worst historian for a thing like this," she said.

She said that in their 10 years together, he volunteered, on two occasions, that he had used drugs — or "slipped," in his words. "I never thought that independently," she said. "He would tell me. He would say 'I had a slip and I'm going to start going to meetings again.'"

The first slip he reported was years ago, early in their marriage. The second was in September.

That one seemed to spook him. "He said, 'If I don't start going to meetings again, I'm going to die,'" Azimi said.

He attended Narcotics Anonymous meetings most nights, in surrounding towns and hamlets. Carmel, Brewster, Mahopac, some nights crossing the state line to Danbury, Connecticut. He called in to telephone meetings twice a week.

"I thought he was sober," she said. "Sometimes he'd say he didn't feel well. I thought that was normal."

She struggled to recall other signs. "'Oh, he didn't look so good' — no one said that at all," she said. "I think the week he passed, he led a field trip to the movies."

In November, he came home from a meeting with a coin. Sixty days sober.

"He always said he was lucky that hadn't happened to him," Azimi said.