‘Shut it down’: Trump threatens government shutdown over border security 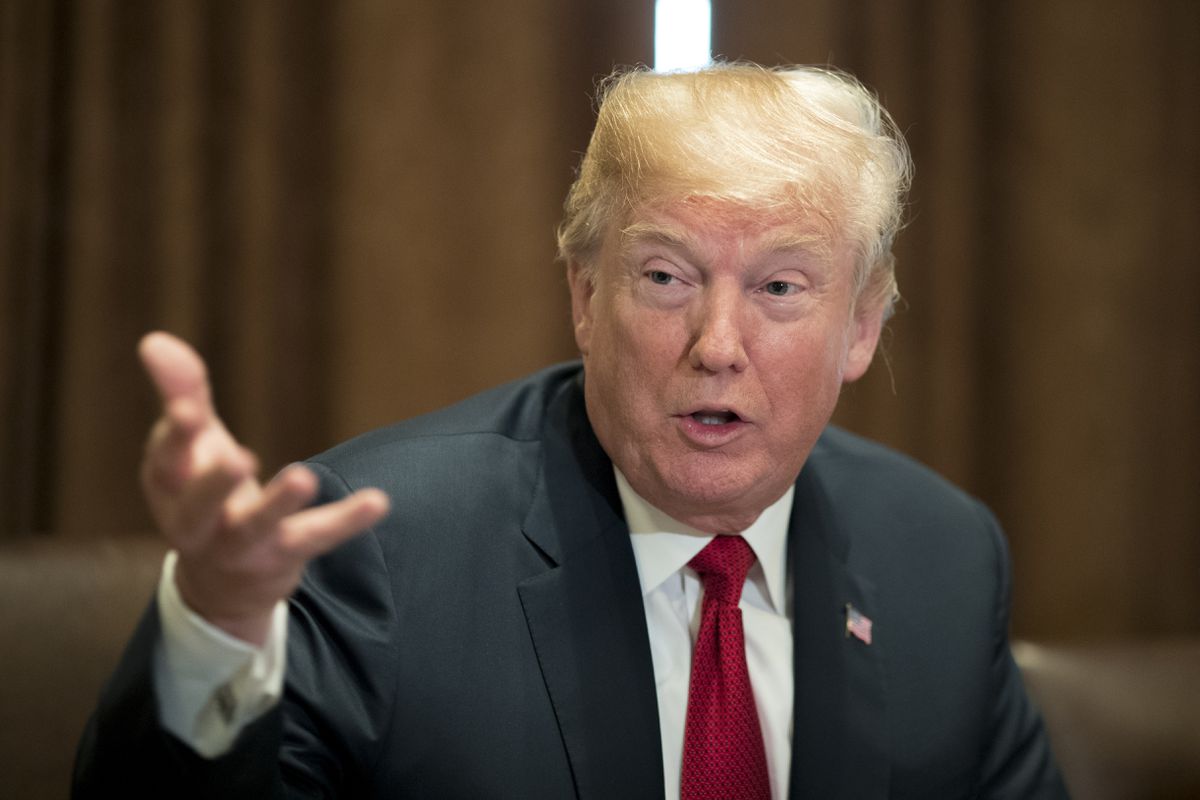 WASHINGTON — President Donald Trump on Tuesday called for shutting down the government if Congress does not crack down on illegal immigration, even as congressional leaders were closing in on a major budget deal to help ensure the government remains funded into 2019.

"I'd love to see a shutdown if we can't get this stuff taken care of," Trump said at a meeting with lawmakers and law enforcement officials to discuss gang-related violence. "If we have to shut it down because the Democrats don't want safety," he added, "then shut it down."

Congressional leaders from both parties were nearing a deal to raise statutory spending caps on military and nonmilitary spending for the current fiscal year and the next one. That agreement could ease the way to passing a temporary spending measure before the government is set to shut down Friday.

A deal on the spending caps would also clear a path for Congress, in the weeks ahead, to fund the government until the fall — sparing the country of the fiscal showdowns that continuously bedevil the government.

"We are closer to an agreement than we have ever been," Sen. Chuck Schumer of New York, the Democratic leader, said, referring to the negotiations over raising the spending caps.

But if the bipartisan deal were to fall through, lawmakers had no clear plan to keep the government open past Thursday, with both parties on a collision course over military spending.

Trump's call for a shutdown Tuesday was not the first time he had brandished the threat of closing down the government. He mused on Twitter last year that the country "needs a good 'shutdown,'" a suggestion that Democrats did not forget.

And on Tuesday, in a striking moment, a lawmaker from the president's own party, Rep. Barbara Comstock, R-Va., pushed back at the White House meeting after Trump called for a shutdown.

"We don't need a government shutdown on this," said Comstock, a top Democratic target in the midterm elections who represents a moderate district in Northern Virginia, an area that is home to many federal workers.

Soon after, Trump interrupted her. "You can say what you want," he said. "We're not getting support from the Democrats."

It has been nearly three weeks since the last shutdown — a three-day closure that ended after Democrats won a promise from the Senate majority leader, Mitch McConnell, R-Ky., to have the Senate consider legislation to protect young immigrants who were brought to the United States illegally as children.

McConnell pledged that the Senate would turn to immigration if no deal had been reached on that subject by Thursday, when the current government funding measure is set to expire. This time, Senate Democrats have shown no appetite to allow the government to shut down.

But the fate of the young immigrants remains highly uncertain, especially given Trump's insistence that Democrats get on board with his desire to build a border wall and enact other tough immigration policies.

White House Chief of Staff John Kelly also took a hard line on immigration during a visit to the Capitol on Tuesday.

He said Trump is unlikely to extend a March 5 deadline, when the Obama-era Deferred Action for Childhood Arrivals program, or DACA, is set to expire. And he said the president has been more than generous in his offer to give 1.8 million young immigrants in the country illegally a path to citizenship in exchange for a series of hard-line immigration policy changes.

"There are 690,000 official DACA registrants, and the president sent over what amounts to be 2 1/2 times that number, to 1.8 million," Kelly told reporters. "The difference between 690 and 1.8 million were the people that some would say were too afraid to sign up, others would say were too lazy to get off their asses, but they didn't sign up."

Both Republicans and Democrats seemed to have no idea how the immigration debate would play out in the Senate in the days to come. McConnell has promised a free and open debate, with senators allowed to offer amendments to whatever measure is brought to the floor. But no one seemed to have any idea what the starting bill would look like.

"That's the $64,000 question," said Sen. John Cornyn of Texas, the No. 2 Republican in the Senate. "Everybody wants to know and Sen. McConnell hasn't told us."

Sen. Lindsey Graham, R-S.C., who has been an ardent advocate of an immigration overhaul, said he is growing "increasingly pessimistic" about the prospects for legislation. Along with Sen. Dick Durbin, D-Ill., Graham has proposed a bill that the White House has already rejected.

At most, he said, he expects Congress to extend DACA in exchange for some improvements to border security. "That's the path of least resistance," Graham said. "And that will be a punt. That will not be winning for the country but that's most likely where we're going to go."

McConnell, meanwhile, gave little hint of how the debate would proceed.

"I'm going to structure it in such a way that's fair to everyone," he told reporters. "And in the Senate, on those rare occasions when we have these open debates, whoever gets to 60 wins. And it will be an opportunity for 1,000 flowers to bloom."

With less than 72 hours remaining to avert a shutdown, House Republicans were moving on an entirely different track from the president.

Republicans planned to move ahead with a House vote on a short-term spending bill that included a full year of funding for the military, daring Democrats to oppose it. Immigration was not part of the equation.

House Republicans are hoping to pressure Senate Democrats — especially the 10 up for re-election in states that Trump won — to go along or face harsh political consequences. The bill would keep the government open through March 23.

"Quite literally the safety of our service members and the security of our country is at stake," Speaker Paul Ryan, R-Wis., said.

But the spending measure expected to pass the House on Tuesday is likely to be dead on arrival in the Senate, where 44 members of the Senate Democratic caucus signed a letter in December opposing such an approach. Passing the bill in the Senate will require 60 votes, meaning that those 44 Democrats, if they stick together, would be able to block it.

Democrats are eager to increase domestic spending along with military spending, and Schumer reiterated that view Tuesday morning.

"Democrats have made our position in these negotiations very clear," Schumer said. "We support an increase in funding for our military and our middle class. The two are not mutually exclusive. We don't want to do just one and leave the other behind."

If a deal on the spending caps is reached, lawmakers could approve legislation that includes that agreement along with a temporary measure to keep the government funded. The package could also end up carrying other items as well, including disaster aid in response to last year's hurricanes and perhaps an increase to the statutory limit on the government's borrowing authority.