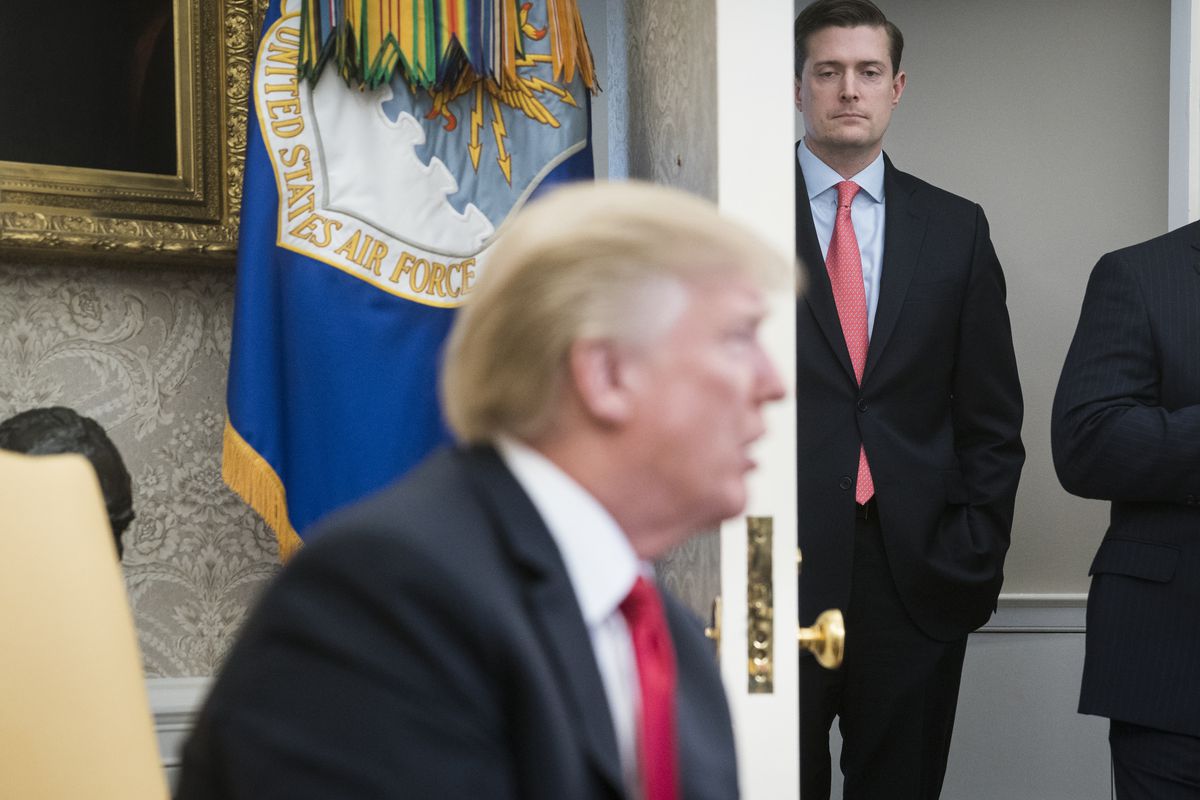 WASHINGTON – A senior White House official said Wednesday that he would resign after his two ex-wives accused him of physical and emotional abuse, with one presenting pictures of her blackened eye.

The official, Rob Porter, served as the staff secretary, a title that belies the role's importance in any White House – but especially in Trump's. Porter functioned as Chief of Staff John Kelly's chief enforcer in their shared mission to instill discipline and order in what had become an extraordinarily chaotic West Wing. He is the gatekeeper to the Oval Office, determining which articles and policy proposals fall into the president's hands and pre-screening the briefing materials that his visitors share with him.

Porter said he would resign when the allegations against him were first published by The Daily Mail Tuesday, people close to him say, even as he told White House officials he had never physically abused women. But he was talked out of it by Kelly and others, with Kelly saying he believed Porter's denials and saw him as a valuable ally in the White House. Kelly continued to press him to stay in his job Wednesday saying he could weather the storm, but Porter decided to controversy had become too much after the damaging photos of the blackened eye appeared Wednesday morning.

In interviews with The Washington Post and other media outlets, Porter's ex-wives described him as having a dark side and, at times, a violent streak that White House aides say they did not see.

Porter's first wife, Colbie Holderness, said in an interview that he was continually abusive during their marriage. She alleged he punched in her the face during a trip to Florence, Italy, in 2005 and provided photos showing her with a black eye.

"He threw me down and punched me in the face," she said. Holderness said she had insisted that he take pictures of her bruised eye after the assault and he agreed. "He was trying to make it up to me and I said I wanted evidence if this should happen again."

Porter denied the accusations but said he was stepping down from his job, although it's unclear when he will officially leave the White House.

"These outrageous allegations are simply false. I took the photos given to the media nearly 15 years ago and the reality behind them is nowhere close to what is being described," he said in a statement. "I have been transparent and truthful about these vile claims, but I will not further engage publicly with a coordinated smear campaign."

Porter's second wife, Jennie Willoughby, received a temporary emergency protective order in Arlington, Virginia, in June 2010 after saying he refused to leave her residence, in violation of their separation agreement. She said he broke her window, causing his knuckles to bleed. The document, a copy of which was obtained by The Washington Post, concludes that "reasonable grounds exist to believe that [Porter] has committed family abuse and there is probable danger of a further such offense."

Kathryn Hughes, a 36-year-old public relations consultant who lives in Kamas, Utah, said in 2012 Willoughby confided in her about a violent incident in December 2010 where she alleges he grabbed her by the shoulders and pulled her from the shower during a fight. Hughes said she and Willlougby met in 2010 at the Church of Jesus Christ of Latter Day Saints in Alexandria, Virginia, and they struck up a close friendship.

"She told me that he had been screaming at her while she was in the shower and yanked her out and bruised her," Hughes said in a telephone interview with The Post corroborating Willoughby's account. "She also told me he was verbally abusive and I witnessed some of that."

Both Willoughby and Holderness said they told the FBI about Porter's conduct and were dismayed to learn of his senior role in the White House. Willoughby provided the contact information for the FBI agent she spoke with, who declined to comment when reached Wednesday. Holderness when the FBI asked her if Porter was vulnerable to blackmail she answered affirmatively because of the number of people aware of his abusive behaviour.

"I thought by sharing my story with the FBI he wouldn't be put in that post. I'm telling the FBI this is what he's done, and Jennie Willougbhy is telling me them what he's done, and the White House says, sure this is OK? I was let down by that," Holderness said.

Willoughby said Porter angrily called her when she posted a blog about him – even without naming him – and asked her to remove it, concerned about his public image. She said Porter demanded again in the fall that she take down the blog, citing delays in his security clearance. In January, he asked her again to take it down telling her that reporters were looking into his past.

"He has never faced repercussions that forced him to confront his issues," she said in an interview Wednesday at an Alexandria restaurant. "I care about him and want what's best for him, but that doesn't necessarily mean him keeping his job because he needs to face these underlying issues."

White House officials said Wednesday he could continue working for several weeks. Aides had been aware generally of accusations against Porter for at least several weeks, White House advisers said, but learned of the specifics late Tuesday when approached by a reporter from the Daily Mail, a British tabloid, which first detailed many of the allegations.

Porter is an ally of Kelly and in addition to serving as staff secretary, he oversaw and sought to streamline the White House's policymaking process, coordinating with Cabinet members and other agency officials and leading meetings about issues ranging from immigration to trade. He played an integral role in crafting Trump's "State of the Union" address last month.

Kelly saw in Porter a partner in professionalizing the operation. Porter is one of the few senior White House staffers with past government experience, having served as chief of staff to Sen. Orrin Hatch, R-Utah. Though many of his colleagues have eclectic backgrounds, Porter boasts a classic pedigree as a Harvard-educates Rhodes scholar whose father, Roger Porter, held senior positions in the Ronald Reagan and George H.W. Bush White Houses.

In a White House known for its ever-evolving personnel dramas, Porter deliberately kept a low profile, only rarely agreeing to be interviewed on the record and never appearing as a surrogate on television.

But he was a highly visible figure in Trump's orbit. He was seemingly omnipresent in the Oval Office for key meetings and events, and regularly traveled with the president – often being one of only a handful of aides to have the privilege of accompanying him on the Marine One helicopter before joining the larger staff entourage aboard Air Force One. When Trump spent weekends at his Mar-a-Lago estate in Florida or his Bedminster golf course in New Jersey, Porter often was along for the trip, tending to the president's needs and briefing him on developments.

When the allegations were published Tuesday, the White House mobilized to defend Porter.

White House communications director Hope Hicks is dating Porter, according to people familiar with the relationship, and was involved in the White House's defense of Porter on Tuesday evening.

"Rob Porter is a man of true integrity and honor and I can't say enough good things about him," Kelly said in a statement Tuesday night. "He is a friend, a confidante and a trusted professional. I am proud to serve alongside him."

"It's incredibly discouraging to see such a vile attack on such a decent man," Hatch said in a statement.

Following the release of the photos of Holderness' bruised eye Wednesday, Hatch released a new statement.

"I am heartbroken by today's allegations. In every interaction I've had with Rob, he has been courteous, professional, and respectful," he said. "My staff loved him and he was a trusted adviser. I do not know the details of Rob's personal life. Domestic violence in any form is abhorrent. I am praying for Rob and those involved."

The decision by Kelly and other top White House aides to defend Porter from domestic violence allegations is in keeping with Trump's modus operandi. Throughout his life, Trump has refused to apologize for misdeeds, believing any such concession to be an admission of guilt and a sign of weakness.

During the 2016 campaign, more than a dozen women accused Trump of sexual harassment and assault, but the then-candidate denied them all outright. He fought back against the accusers, trying to demean the women and even threatening to sue some of them.

Trump's posture and inclinations have shaped the culture of the West Wing, where aides often hunker down and try to fight back against accusations or scrutiny from the media or other outside forces. A White House official said Kelly stood by his statement praising Porter, even after the senior official resigned.

Asked Wednesday whether Trump had any concerns about the allegations against Porter or with the photos of Holderness, White House press secretary Sarah Huckabee Sanders said, "I don't know."

Porter had a reputation in the building for his fastidious work and was liked by the president, who sometimes rages at other aides.

His ex-wives said that Porter directed his abusive behavior toward them in private.

"In my experience, his anger and his lashing out is very much limited to intimate, personal romantic relationships," Willoughby said. "He has the ability to compartmentalize and maintain his integrity and professionalism at work. . . He is charming and intelligent and fun and chivalrous and angry and deeply flawed."

Willoughby, a writer and former high school teacher, said she was unaware of the abuse alleged by Porter's first wife while with him. But Holderness reached out to her through Facebook in late January after she was contacted by the FBI and anticipating the background check interview.

The two met for lunch in Arlington in March and shared their stories – before they shared them with the public this week.

The Washington Post's Philip Rucker and Tom Jackman contributed to this report.