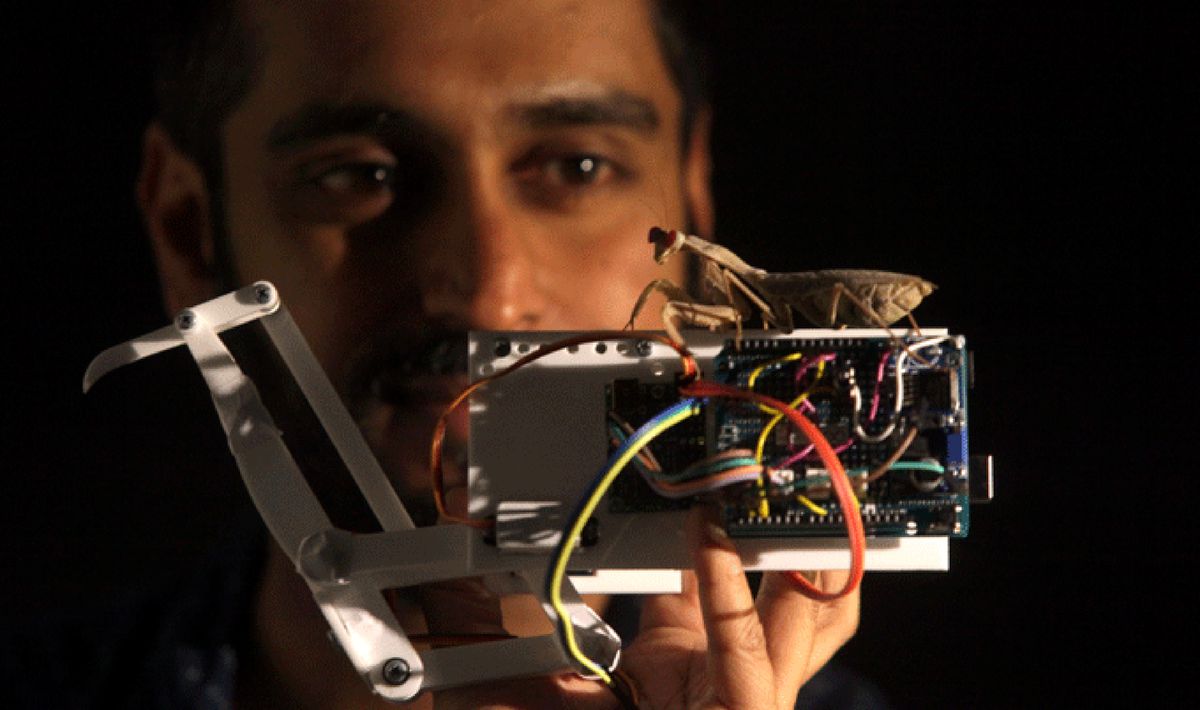 If you thought praying mantises already look pretty cool, wait till you see them in these stunning shades. Scientists who put tiny 3-D glasses on these petite hunters have found that their stereoscopic vision system is unlike that of any other known animal.

The findings, described this week in the journal Current Biology, reveal how these remarkable insects have developed a sophisticated ability with such a tiny brain — and could prove useful in designing visual systems for future robots.

Vertebrate animals use their stereoscopic vision to perceive depth. Each eye sees a slightly different image because of its slightly different vantage point, and the brain basically slides those two images together and calculates how far objects are based on the amount of sliding needed to match them up.

All kinds of animals, including humans and other primates, can do this, said senior author Jenny Read, a neuroscientist at Newcastle University in England. But the only known insect to also possess this ability is the praying mantis, a tiny critter whose brain has only a million or so neurons. (Compared with the roughly 100 billion neurons in a human brain.)

"I guess I come from this vertebrate-biased tradition, which thought of stereopsis as something very complicated and advanced that only 'higher organisms' can do," Read said. "I was initially skeptical."

[Nigel, the world's loneliest bird, dies next to the concrete decoy he loved]

Read and her colleagues have since confirmed research from the 1980s showing that praying mantises really do have 3-D vision. In a 2016 paper, they used beeswax to stick tiny blue-and-green 3-D glasses on the faces of praying mantises and showed them 3-D movies of what appeared to be tasty-looking prey, finding that the insects lunged only at targets in the 3-D movies, not the regular 2-D ones.

3-D vision is a handy ability for praying mantises, which are skilled hunters of their fellow insects and are known to take down the occasional small bird. But how did such an apparently simple creature develop such a complex ability? Did their brains process visual information in the same way as humans and other vertebrates, or was it using a totally different mechanism to do so?

"I thought this would be a very exciting thing to investigate," Read said. The answer, she explained, "would be interesting either way."

Scientists already know how to confuse human 3-D vision — and so they set out to see if praying mantises would also fall, er, prey to those same tricks.

The researchers showed humans with 3-D glasses some images of moving dark and bright dots, except that the image shown to one eye was essentially the photonegative of the other. Because human vision seems to try to correlate the image contrast from each eye's viewpoint, flipping the contrast in one of them inevitably thwarts human depth perception, Read said. Viewers can't tell which elements are nearby and which are far away.

The praying mantises, it turned out, did not suffer from the same problem.

"They were just totally unfazed by this manipulation and kept on striking when objects were near and not when they were far away," Read said. "So that told us something fairly profound. That was telling us praying mantises do not use correlation for their stereovision _ at least not the correlation of image contrast. They're doing something really different."

The scientists then took it a step further. They showed each eye a different, uncorrelated set of dots, but both with a moving target passing through them. Again, where the humans failed to perceive when the object was "close," the mantises succeeded.

"Clearly they were able to match up the moving target even though the dot pattern didn't match at all — and that's something that humans can't do," Read said.

The scientists think it's because the insects are not trying to correlate all the details in the images, but instead are looking for changes in the light patterns over time. Basically, they're looking for only things that move; the rest of the picture's little touches don't really matter.

There could be a reason for these very different systems, Read pointed out. Human visual systems are very good at picking out the differences in still images, which might help them to better see through camouflage. On the other hand, based on their hunting style, praying mantises might be better served by a system that picks up only the movements of nearby prey.

The findings could help scientists design better computer algorithms for simpler visual processing systems in drones and other robots, the researchers said.

"We think the mantis 3-D algorithm, since it's simpler, could be implemented into processing systems that require less computing power," said lead author Vivek Nityananda, a behavioral ecologist at Newcastle University. "It could be implemented for example into lightweight robots."