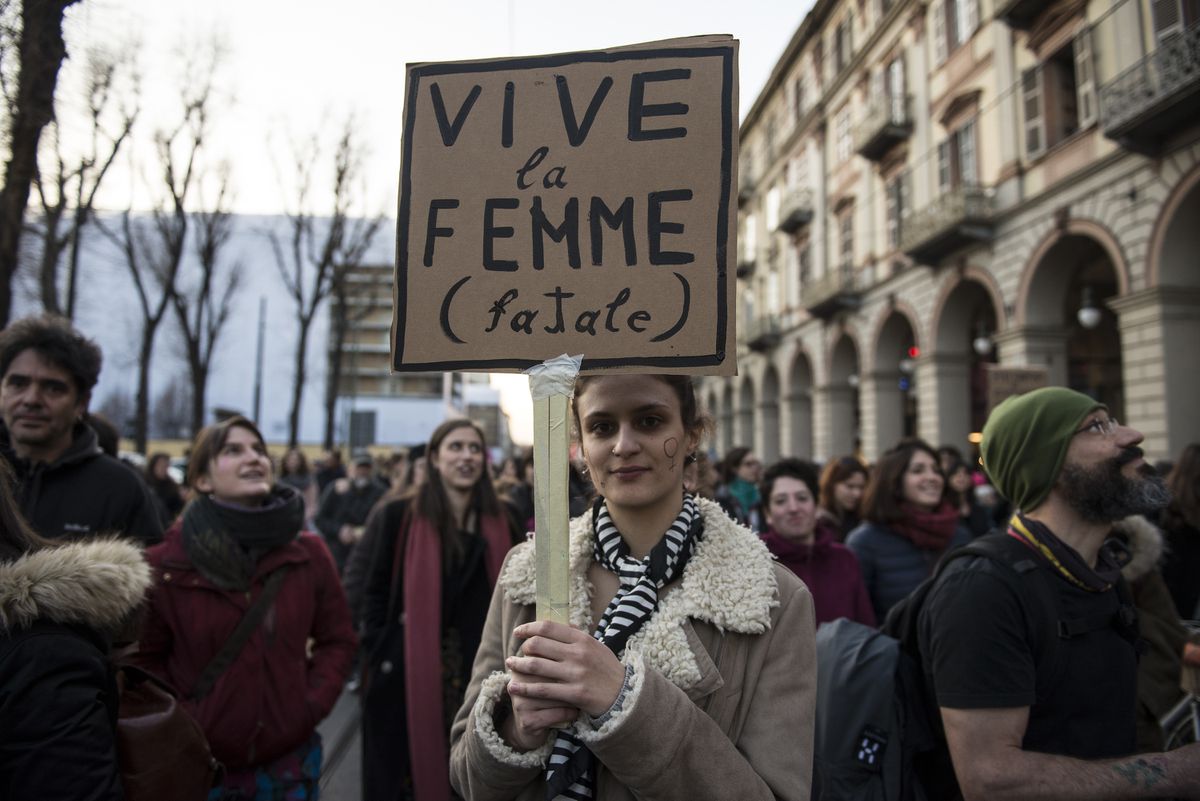 MOSCOW — Galvanized by hopes that the #MeToo movement might at last herald a social sea change, women across the globe rallied, chanted and in some cases walked off the job Thursday to mark International Women's Day.

From Moscow to Mexico City to Manila, women and their supporters pressed for a range of demands, including equal pay for equal work, a halt to workplace sexual harassment, a greater voice in public policy, more educational and professional opportunities and an end to violence against women.

But amid expressions of solidarity and determination, many of those bearing the heaviest burdens of inequality were too busy simply trying to get through another day to think about attending a march. And in some cases, the authorities stepped in — as happened in Iran, where an attempt to mark the day with a rally ended with several arrests.

Like the workers' holiday May Day, International Women's Day has never garnered quite the attention in the United States that it does overseas. But over the last several months, the U.S., with Hollywood somewhat improbably leading the way, has been a wellspring for a wide-ranging social reckoning on sexual harassment that has been spreading to other countries.

The White House released a statement hailing the administration's efforts to empower women, even as it batted away questions over the claims of an adult-film actress who said she was paid hush money just before the election of President Donald Trump in an attempt to silence her about an affair with him more than a decade ago.

"As we mark International Women's Day, we remain committed to the worthwhile mission of enhancing women's leadership in the world and building a stronger America for all," the statement said.

Women's Day is a national holiday in Russia, but President Vladimir Putin's official congratulations seemed to praise the existing order of things, rather than vowing to support changes that would empower women.

Praising women for creating "a welcoming atmosphere" at work while also taking on "daily cares about the house and children," the Russian leader declared "our enchantment with your beauty and tenderness."

With most of the country off from work, Moscow's central streets were free of traffic while its sidewalks were full of shoppers and couples strolling. Women braved the cold temperatures with bouquets of flowers in their hands.

Several of Moscow's Metro stations offered manicures and makeovers to female passengers. Ironically, women are forbidden from driving metro trains — it's one of the job titles considered "too dangerous." Last year, a woman took the state to court to earn her right to become a captain on a Volga River cargo ship.

Thursday's holiday also coincided with a sexual harassment scandal brewing in Russia's parliament. Dozens of protesters took turns standing outside the parliament building to demand the resignation of a pro-Kremlin deputy accused by three female journalists of sexual harassment. The lawmaker in question apologized for any offense given but denied the accusations.

In Turkey, which has been the scene of a sweeping crackdown against government opponents, the Women's Day commemorations turned into a wider condemnation of human rights abuses. Groups organizing a march down the capital's famed Istiklal Street condemned the closing of news outlets and the ongoing state of emergency declared by President Recep Tayyip Erdogan.

But marchers also sought to call attention to issues such as "honor killings," which target women perceived to have brought their families dishonor. More than 400 such killings took place last year, according to We Will Stop Femicide Platform, a Turkish group monitoring the fatalities.

In some countries, the day took on a distinctly commercial air. Chinese retailers staged a blitz of retail promotions aimed at women, offering specials pegged to what they dubbed "Queens' Day" or "Goddesses' Day," the Reuters news agency reported. That drew complaints from some women's groups, who called it a distraction from social ills such as sexual harassment.

[Consent in the digital age: Can apps solve a very human problem?]

Western Europe considers itself feminist-friendly, by and large, but protests there centered on longstanding inequities.

In France, where estimates are that women earn a quarter less than their male counterparts, the day was marked by a brief symbolic pause in sessions of both houses of the parliament. The government announced a raft of new measures aimed at combating gender inequality and violence against women.

In central Paris, thousands gathered in the Place de la Republique, which houses a large statue of Marianne, the symbol of the French republic.

"It's not a party!" said organizer Veronique Sehier. "It's a battle for everyone."

The women's group Femen, whose members usually protest topless with slogans written on their bodies, stood at the base of the statue fully dressed.

In Germany, whose Chancellor Angela Merkel is one of the world's most powerful women, demonstrations were held in the capital, Berlin, and other cities to call attention to issues including pay inequity and too few women in leadership positions. "There is still a lot of work to do," Merkel said.

Some of the issues raised were wrenchingly personal. In Britain, a group of 135 lawmakers from all parties used the occasion to write to Home Secretary Amber Rudd, urging her to allow women from Northern Ireland the same access to abortion services as those in the rest of the United Kingdom. Currently, many women seeking abortions in Northern Ireland must travel to England.

One of the largest protests came in Spain, where women staged nationwide work stoppages with the support of two major unions. The newspaper El Pais posted a video on Twitter that showed a half-empty newsroom. "We're not all here today," its Twitter account reported, explaining that the women were out on strike.

A huge evening march was held in Madrid, with gatherings in many other Spanish cities — including Barcelona, which has been roiled by tensions over an independence movement and where riot police scuffled with some marchers.

In Mexico City, teacher Claudia Davila Castillo walked out of her classroom Thursday morning to gather with a group of colleagues near the landmark Cibeles Fountain. Their protest was one of dozens that sprung up around the city, including a large march down the city's main thoroughfare.

Toting signs that said "Machismo: Now that's terrorism," Davila and her colleagues led chants as they marched around a large fountain featuring an elaborate neoclassical statue.

Street harassment is rampant in Mexico, one of her colleagues explained. "We are also mistreated at home!" another interjected.

Last month, Mexico had a "Me Too" moment when well-known actress Karla Souza came forward with allegations that she had been assaulted by a director. While her public stance has not opened the floodgates for other victims of harassment to come forward, as happened in the wake of the Harvey Weinstein scandal in the U.S., Mexican feminists have been increasingly visible in recent years, especially around the issue of street harassment and violence.

Nearly half of Mexican women have been subjected to rape, groping or other forms of sexual violence, according to the United Nations, which ranks Mexico among the most violent countries for women. And in recent years, there has been mounting outrage around the most notorious cases, including hundreds of unsolved killings of female factory workers in the border city of Juarez and a similar spate of killings in the state of Mexico.

In Tehran, the day served as a reminder of women's struggle for social freedoms. Uniformed and plainclothes officers cited women for violating the Islamic dress code requiring them to cover their hair, according to the Kargari news channel, an opposition media outlet based outside the country.

The channel described a "heavy crackdown" by police, and Iranians on social media reported large numbers of security officers in vans and motorcycles in central areas of Tehran. Iranian authorities have sought to quell any large demonstrations in recent months, following the anti-government protests that broke out in dozens of cities in late December.

State-run media delivered a Women's Day message from the country's supreme leader, Ayatollah Ali Khamenei, that was unlikely to satisfy those seeking change. "Women are the managers of the home and a source of peace in the minds of men," the message said.