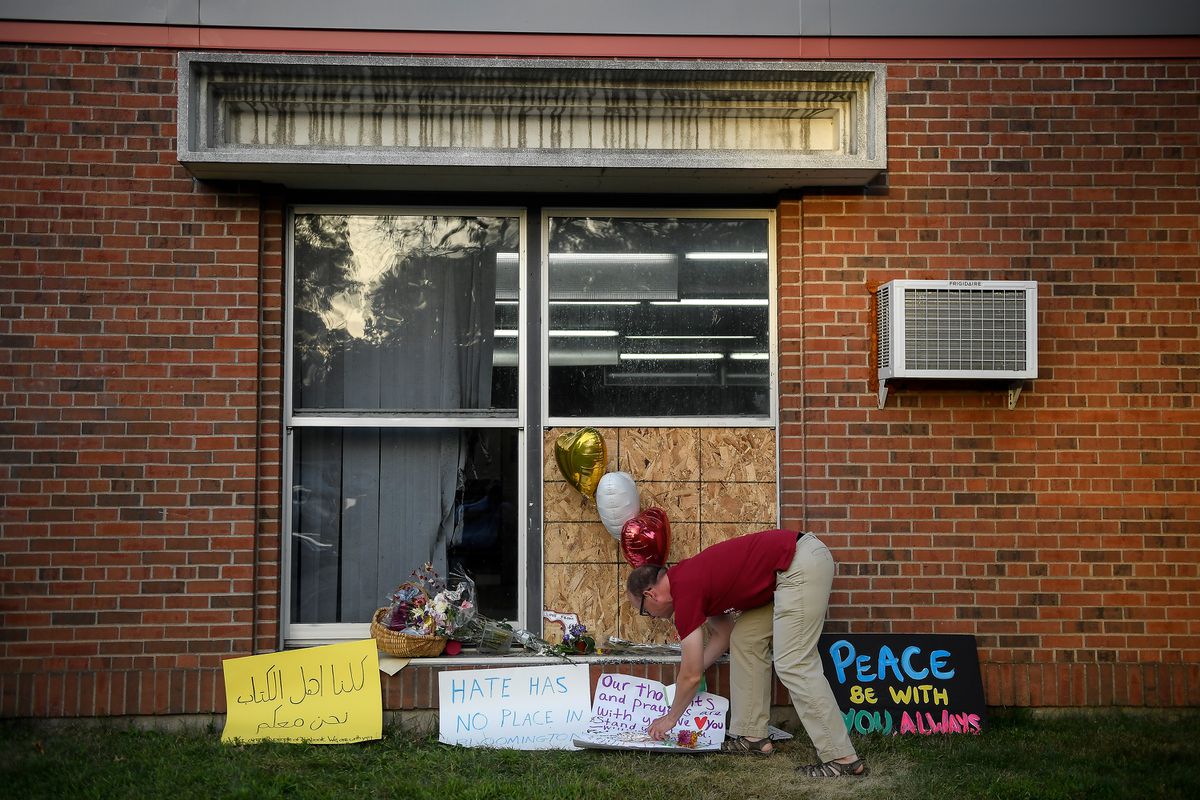 Ben Sunderlin places a sign of support near the window that was damaged during an attack at the Dar Al Farooq Islamic Center in Bloomington, Minn., on Tuesday, Aug. 8, 2017. Three Illinois men were arrested for the bombing. (Aaron Lavinsky/Minneapolis Star Tribune/TNS)

Ben Sunderlin places a sign of support near the window that was damaged during an attack at the Dar Al Farooq Islamic Center in Bloomington, Minn., on Tuesday, Aug. 8, 2017. Three Illinois men were arrested for the bombing. (Aaron Lavinsky/Minneapolis Star Tribune/TNS)

MINNEAPOLIS -- A Bloomington, Minn., mosque was bombed last August by three Illinois men who traveled eight hours from their small hometown to terrorize Muslims in hopes of making them flee the country, according to the FBI.

The trio was arrested Tuesday in Illinois after one of them admitted to aiding the plot and also described his role in a failed effort to bomb an Illinois women's health clinic months later.

The break in what the FBI described as its top investigative priority in Minneapolis lent long-sought answers to the Dar Al-Farooq Islamic Center's congregation even as it introduced a new set of questions.

"We are happy that the people are caught," said Abdulahi Farah, a member and volunteer. "At the same time we're a little bit shocked that they came all the way from Illinois just to cause hate on the community."

The bombing rocked Minnesota's interfaith community and prompted the governor to declare it an act of terror.

Michael McWhorter, 29; Joe Morris, 22 and Michael Hari, 47, are charged with "using an explosive device to maliciously damage and destroy" the center in the predawn hours of Aug. 5, using a PVC pipe bomb allegedly fashioned by Hari.

According to charges, each man had a role in the attack: Hari, the alleged bomb-maker, drove the three to Minnesota and acted as a getaway driver; Morris allegedly smashed in the office window with a sledgehammer and McWhorter told agents he tossed the pipe bomb inside, in what turned out to be the imam's office. McWhorter allegedly admitted to his role in the plot in a pair of FBI interviews Saturday and Tuesday before the men were charged.

He claimed it was Hari's idea to target the mosque and that the men didn't intend to kill, according to an FBI terrorism task force officer's affidavit, "but they wanted to 'scare (Muslims) out of the country' ... because they push their beliefs on everyone else."

"McWhorter also said they committed the bombing mainly to 'show them hey, you're not welcome here, get the (expletive) out,' " the affidavit continued.

The three were charged Tuesday after a confidential source alerted investigators that they were responsible for the mosque blast and the failed clinic bombing and McWhorter admitted his involvement in the plot, according to authorities. Charging documents described the informant as someone Hari recruited into an "organization" that he led.

A source with knowledge of the investigation said Tuesday that authorities are still working to determine the nature of the group and its associations. Investigators also don't yet know why the men selected Dar Al-Farooq last summer.

Morris and Hari made their initial appearance Tuesday on federal charges related to the attempted bombing of the women's health clinic in Champaign, Ill.

The Chicago Tribune reported last year that Hari, who had launched his own global security firm, wanted to build President Donald Trump's wall on the Mexican border and believed he could do it better, and for billions of dollars less, than more established contractors.

With the men in custody, additional charges could be forthcoming as the FBI ramps up its probe of the group.

"Although the investigation is ongoing, it is important that the public be made aware that these individuals have been apprehended and are charged federally with the bombing in Bloomington," Greg Brooker, U.S. Attorney for the District of Minnesota, said at a news conference. "That bombing that took place last summer was a tragedy for all Minnesotans, and from the beginning, it has become a top priority for federal and local law enforcement and remains so today."

No one was hurt in the explosion, which heavily damaged the imam's office, but about a dozen people were gathered in a room nearby for morning prayers.

The bomb exploded a short distance inside the office, starting a fire that was quickly put out by the building's fire suppression system. A witness who was outside the mosque reported hearing the sound of broken glass before seeing a man get into a pickup truck that sped out of the Islamic center's parking lot and turned north on Park Avenue.

In the hours after the blast, the case quickly became the biggest unsolved investigation for the FBI in Minneapolis, and the bureau announced a $30,000 reward for more information in the weeks after the bombing as leads began to prove elusive.

But the men allegedly continued to discuss the mosque blast, including while out drinking one night with an eventual informant in the case. The informant also described a meeting of the group at Hari's office in Clarence, Ill., a tiny community 120 miles south of Chicago, at which a cache of weapons was reportedly seen stored inside a safe. The arsenal included automatic firearms, M4s and an explosive known as Tannerite, the charges said.

According to the charges filed in Illinois, another informant shared photos late last year of firearms and bomb-making materials that Hari allegedly stored at his parents' home, where he often stayed because his own house had no running water or electricity. Hari also allegedly stored a copy of the Anarchist's Handbook, which includes instructions for creating the thermite used in the pipe bombs.

Robert Bone, acting special agent in charge of the FBI's Minneapolis division, said that in light of pending federal charges, his office cannot discuss additional details of the case or investigation.

"That said, we continue to investigate the motivations behind this attack," Bone said, adding that his office believes there is no further threat to the community related to the bombing. Bone thanked community members for providing valuable information to investigators.

"We hope this is a significant portion of the healing process for Dar Al-Farooq," Potts said. "Thank you to our community."

At a news conference at the mosque Tuesday night, Jaylani Hussein, executive director of Council on American-Islamic Relations-MN, said he's extremely concerned about what he called a well-funded, organized attack. He added that he believed someone who lives near the mosque may have "put a target" on it.

According to charges, an FBI informant told agents that one of the co-conspirators said Hari promised the two other men $18,000 for their help with the attack.

Mohamed Omar, executive director of the mosque, said his community is resilient. "Why did they target us? That's the question we are still waiting" to get answered, he said.

After the bombing, Gov. Mark Dayton quickly labeled the blast an act of terrorism and elected officials and other community leaders gathered to show support.

Imam Waleed Meneese's office took a direct hit from the bomb. Its windows were smashed and its floor, ceiling and walls destroyed. Shrapnel also ripped through the furniture.

In January, more than 100 people visited the center for an open house celebration of renovation work done for free by the North Central States Regional Council of Carpenters. The carpenters' union repaired the office using floor panels and electrical work donated by different companies.

The repairs inside and outside the office cost "thousands of dollars," according to Omar. The center had raised more than $98,000 through a GoFundMe campaign, with part of the funds going toward reconstruction.