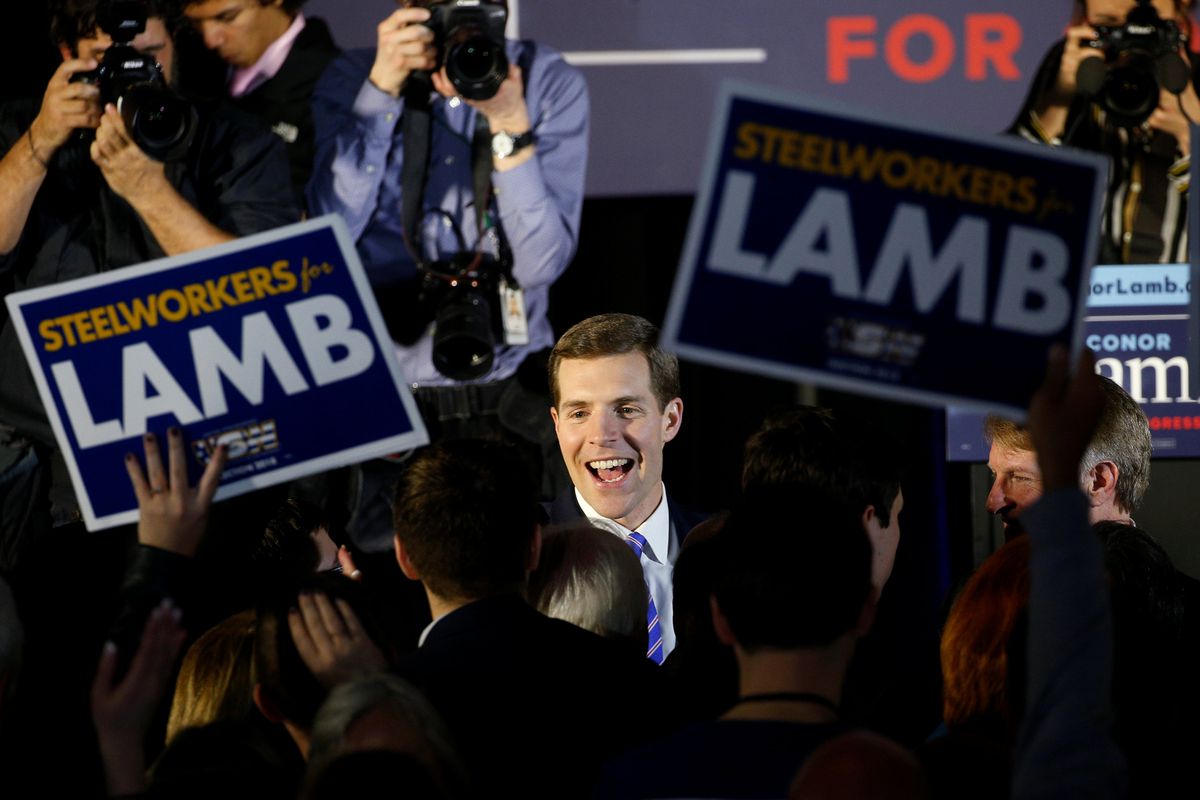 Conor Lamb, a Democrat and former Marine, scored a razor-thin but extraordinary upset in a special House election in southwestern Pennsylvania after a few thousand absentee ballots delivered Democrats a win in the heart of President Donald Trump's Rust Belt base.

The victory still may be contested, but Lamb's 627-vote lead Wednesday afternoon appeared insurmountable, given that the four counties in Pennsylvania's 18th district have about 500 provisional, military and other absentee ballots left to count, county election officials said. That slim margin, out of almost 230,000 ballots cast, nonetheless upended the political landscape ahead of November's midterm elections and emboldened fellow Democrats to run maverick campaigns even in deep-red areas where Republicans remain bedeviled by Trump's unpopularity.

Republican officials in Washington said they were likely to demand a recount through litigation, and the National Republican Congressional Committee put out a call for voters to report any irregularities in the balloting. Matt Gorman, a spokesman for the committee, said the party was "not conceding anything."

But absent significant adjustments in the tally, Lamb, a 33-year-old former prosecutor from a local Democratic dynasty, pulled off a staggering upset over Rick Saccone, a Republican state legislator, in a district that Trump carried by nearly 20 percentage points in 2016.

The hairbreadth outcome in the race belied its sweeping consequences. The battle for a district in suburban and rural areas around Pittsburgh underscored the degree to which his appeal has receded across the country. And it exposed the ways in which both parties are weighed down by divisive leaders: Democrats by Nancy Pelosi, the House minority leader; Republicans by Trump and Paul Ryan, the speaker of the House.

Just as vividly, the race showed that only one party appears willing to grapple with the implications of campaigning under a radioactive figurehead.

In Pennsylvania, Lamb presented himself as independent-minded and neighborly, vowing early he would not support Pelosi to lead House Democrats and playing down his connections to his national party. He echoed traditional Democratic themes about union rights and economic fairness, but took a more conservative position on the hot-button issue of guns.

Throughout the race, Lamb said he welcomed support from people who voted for Trump, and he saved his most blunt criticism for Ryan, highlighting the speaker's ambitions to overhaul Social Security and Medicare.

Lamb's approach could become a template for a cluster of more moderate Democrats contesting conservative-leaning seats, in states like Arkansas, Kansas and Utah. Democrats in Washington have focused chiefly on Republican-held seats in the upscale suburbs where Trump is most intensely disliked.

But they are hungry for gains across the political map, and in red areas they have encouraged candidates to put local imperatives above fealty to the national party, even tolerating outright disavowals of Pelosi.

Rep. Cheri Bustos, D-Ill., who represents a farm and manufacturing district Trump narrowly carried, said the party's recruits should feel free to oppose Pelosi if they choose. She noted that she was helping one such anti-Pelosi candidate, Paul Davis of Kansas, who was in Washington this week raising money.

"If they want somebody else to be a leader, then they ought to express that," Bustos said. "I don't have a problem with that."

Rep. Mike Doyle of Pennsylvania, a veteran Democrat from a neighboring district, said Lamb had benefited from "buyer's remorse" among Trump supporters and had wisely tailored his message to the conservative-leaning area.

"This guy has made a lot of promises that aren't being kept," Doyle said of the president.

On the Republican side, Saccone, 60, campaigned chiefly as a stand-in for Trump, endorsing the president's agenda from top to bottom. He campaigned extensively with Trump and members of his administration and relied heavily on campaign spending from outside Republican groups that attempted to make Pelosi a central voting issue. Conservative outside groups also sought to promote the tax cuts recently enacted by the party, but found that message had little effect.

Yet the Republicans' all-hands rescue mission was not enough to salvage Saccone's candidacy. Saccone has not conceded, and Republicans have indicated they may challenge the results through litigation, a long-shot strategy.

In a meeting with House Republicans on Wednesday morning, Rep. Steve Stivers of Ohio, who leads the party's campaign committee, described the race as "too close to call," according to a person who heard his presentation.

But Ryan and Stivers also called the election a "wake-up call" for Republican lawmakers, telling them that they could not afford to fall behind on fundraising, as Saccone did.

Lamb raised $3.9 million and spent $3 million, compared with Saccone's $900,000 raised and $600,000 spent as of Feb. 21. But Republican outside groups swamped the district. Between conservative super PACs and the National Republican Congressional Committee, Saccone had more than $14 million spent on his behalf.

Lamb got just over $2 million.

As Republican lawmakers spilled out of their morning conference meeting, few seemed willing to come to grips with how much Trump is energizing Democrats and turning off independent voters. Some of them even argued that Saccone only made the race close thanks to the president's rally in the district on Saturday.

"The president came in and helped close this race and got it to where it is right now," said Ryan.

Others in the conference, however, talked more openly about the political difficulties of breaking with Trump.

"There is no benefit from running away from the president," said Rep. Patrick McHenry of North Carolina, a member of his party's leadership, noting that Republican candidates need core conservative voters to show up and this constituency still backs the president.

"It doesn't get them the same thing as Lamb opposing Pelosi," McHenry said.

Even Stivers, who is tasked with re-electing a contingent of lawmakers from districts that backed Hillary Clinton, declined to say Republicans should feel free to break from Trump.

"I am not going to tell anybody to be against the president," he said.

But Lamb's margin and the turnout levels in the district's suburban precincts proved crucial, and a handful of Republican House veterans conceded this broader vulnerability.

"We know that's probably where the president's appeal is the weakest," said Rep. Tom Cole of Oklahoma, a longtime party strategist, adding: "It's a pattern we've seen throughout."

But he argued that Trump's unpopularity in high-income areas would not as adversely impact incumbents who have their own identity and are steeled for difficult races.

Yet even as most of the Republicans pinned the blame on Saccone's fundraising weakness or held up Lamb's willingness to oppose Pelosi, refusing to fault Trump, one retiring lawmaker was more blunt.

"Denial isn't just a river in Egypt," said Rep. Charlie Dent of Pennsylvania, a frequent critic of the president. "I've been through wave elections before."

Democrats were buoyant at Lamb's victory, viewing his upset as both a harbinger of a November wave and perhaps a sign that the party had overcome some of the most stinging Republican attack lines of the Obama years. Polling in both parties found Pelosi widely disliked among voters in the district, but the Republican ads featuring her failed to disqualify Lamb.

Pittsburgh Mayor Bill Peduto, a Democrat, said Lamb's campaign showed that the Republicans' anti-Pelosi playbook had real limitations. The race, he said, should embolden Democrats to contest difficult districts in the Midwest with an economic message that appeals to elements of Trump's base.

"Conor Lamb was talking about redevelopment and economic growth, and the Republicans were talking about Nancy Pelosi," Peduto said. "It's like they couldn't help themselves."

Peduto urged the Democratic Congressional Campaign Committee, the electioneering vehicle for House Democrats, to expand its target list in the Trump-aligned Midwest.

"Look through the Rust Belt, in areas that used to be blue," Peduto said. "If you're in a congressional district that's 8, 10 or 12 points carried by Trump, I would hope that the DCCC is now putting that in the target."

To the extent that Democrats attempt further incursions into Trump country, it may test their party's willingness to tolerate Lamb-like deviation on matters like gun control, and perhaps more widespread rejection of Pelosi.

Democrats in Washington have already faced criticism from liberal activists for intervening in primary elections, in states like Texas and California, to promote candidates that they view as more electable. Putting forward a slate of moderates in Republican areas could prove more controversial than boosting just one in a special election.

Up to this point, however, Democratic leaders and their campaign tacticians have taken a just-win approach, encouraging candidates to attack Ryan but taking a far more permissive view of party loyalty than their Republican counterparts.

Clarke Tucker, a Democratic state legislator in Arkansas who is challenging Rep. French Hill, a Republican, said on Wednesday that he took Lamb's victory as a validation of a throw-the-bums-out message he planned to deliver in his own race. Campaigning in a seat that comprises Little Rock and its suburbs, Tucker said he seldom spoke about Trump and announced up front that he would not back Pelosi.

Tucker, who was aggressively recruited by the DCCC, said he had told Democrats in Washington that he was "very frustrated with the leadership of the House in both parties" and no one attempted to dissuade him from delivering that message.

"That district is a lot like the one I'm running in," Tucker said of Lamb's seat. "I think voters are interested in changing the leadership in Washington."