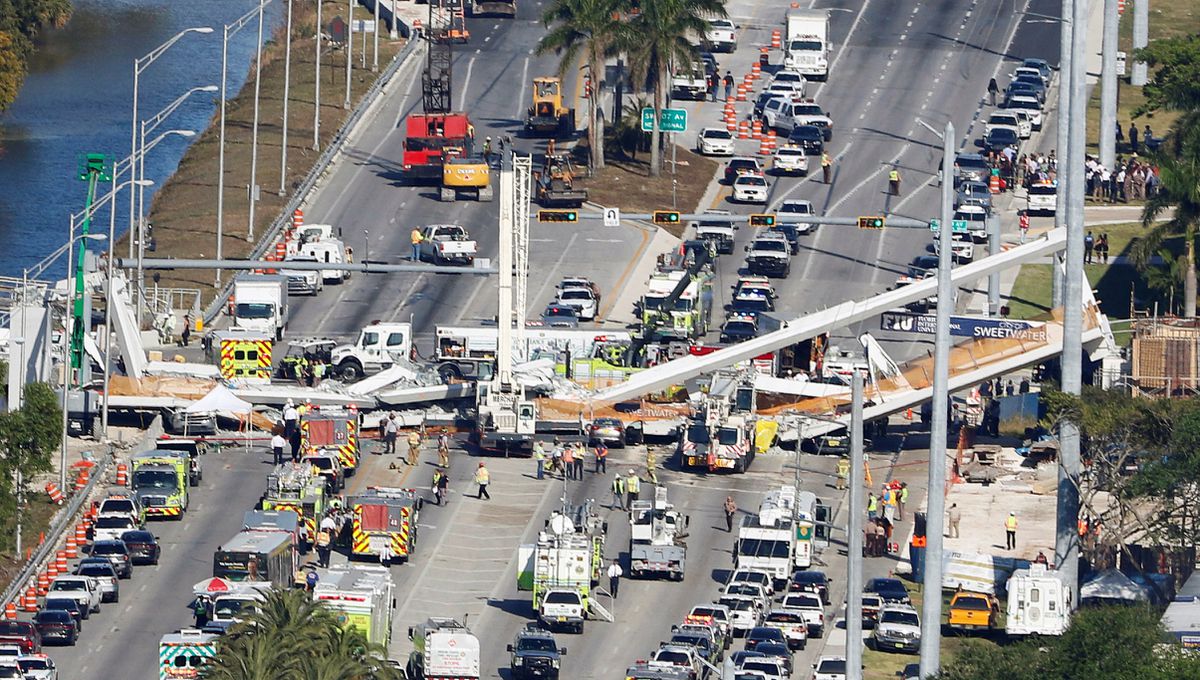 MIAMI — A pedestrian bridge under construction at Florida International University collapsed Thursday, killing at least six people just days after crews had dropped an elevated 950-ton span in place in a project that was intended to give students a safe route across the busy roadway.

At a 5 a.m. EDT briefing Miami-Dade police spokesman Alvaro Zabaleta said six people are now confirmed dead. What wasn't clear: whether some of those dead still remain trapped in vehicles under the collapsed walkway.

"They're using a lot of the heavy equipment," Zabaleta said. "It's a slow process because of the unsteadiness of the structure."

Earlier in the morning police said the search and rescue had turned to a recovery — meaning police no longer believe there are any survivors.

Here is the footage showing the #fiubridge collapse. @MiamiHerald pic.twitter.com/yTRlb8KGwt

The video, which appears to be filmed by someone looking at a screen that displaying footage from a security camera pointed at the bridge, was posted on Twitter and other social media sites.

The footage shows traffic flowing normally until the bridge suddenly, without warning, falls on the roadway. People can be seen standing on the bridge when it collapses.

The bridge gave way suddenly while the traffic light for motorists on Tamiami Trail was red and the concrete span flattened a row of at least eight stopped vehicles. Police on the scene said at least six people could be dead but the exact number of victims remained unconfirmed.

Motorists scrambled out of their cars to help. At least one woman, Katrina Collazo, escaped from a half-crushed car, pulled out unscathed by rescuers.

"Thank God … my daughter is alive," said her mother, Ada Collazo, in Spanish, after rushing to the scene. "I thought my granddaughter was in the car, but she wasn't. She's in school."

Ada Collazo said her daughter had been on campus for a nursing meeting. She had stopped at a red light when she said she heard what sounded like small rocks falling on her car. As she turned around, the massive span flattened the back of her car like an aluminum can. The car next to her was not as lucky. It was buried.

The bridge — in a catastrophic and sudden failure — crashed down across six lanes of heavily traveled Tamiami Trail. It was not immediately clear what caused the collapse of a structure that had been touted as an innovative "instant" bridge because of how quickly it could be constructed. Authorities stressed that it could take days or more to determine what went wrong. Several witnesses reported that workers were on the bridge, which was not expected to open to foot traffic until 2019, when it crumbled.

Designed as a cable-supported bridge, the $14.2 million project was a collaboration between MCM Construction, a prominent Miami-based contractor, and Figg Bridge Design, based in Tallahassee. Figg is responsible for the iconic Sunshine Skyway Bridge across Tampa Bay.

Figg issued a statement Thursday saying the company was "stunned" by the collapse and promising to cooperate with every authority investigating the collapse.

"In our 40-year history, nothing like this has ever happened before," the company's statement said. "Our entire team mourns the loss of life and injuries associated with this devastating tragedy, and our prayers go out to all involved."

Gimenez added that the bridge had undergone testing before the collapse.

"There was some sort of test going on this morning," Gimenez said. "Some kind of work was going on at that bridge, a stress test."

Miami-Dade County police and fire rescue said at least eight cars had been crushed under the walkway but crews with specially trained dogs and listening device were poring over the wreckage, hoping to find survivors. Crews also brought in heavy equipment to lift sections of the shattered span.

"I don't know what's under the bridge, under the rubble," said Lt. Alex Camacho of the Florida Highway Patrol. "It's impossible to see."

The injured were transported to the trauma center at Kendall Regional Medical Center. A hospital spokesperson said Kendall Regional received 10 trauma patients ranging in age from 20 to 50 years old, including one man whose heart had stopped beating when he arrived.

Doctors revived the man, who was not identified, and wheeled him into the operating room. He is listed in critical condition with head and chest injuries.

A second patient arrived comatose with severe injuries that required orthopedic and neurosurgery, the hospital spokesperson said. The remaining eight patients are in stable condition with injuries ranging from scrapes and bruises to broken bones.

The collapse was clearly a major failure but there was no immediate explanation for what brought the structure down shortly before 2 p.m. EDT. Maurice Kemp, the deputy mayor who oversees the police and fire departments, cautioned that information the Gimenez provided about a potential stress test before the collapse was "very preliminary."

Kemp declined to identify the source of the information, but said he had conversations about workers "possibly adjusting tension lines on the bridge" before the accident.

MCM Construction Management, which is building the bridge, posted a message to the company's Facebook page after the collapse promising "a full investigation to determine exactly what went wrong."

Florida Sen. Bill Nelson said the National Transportation Safety Board would investigate the bridge collapse. Nelson posted a message to Twitter just before 4 p.m. that he spoke with NTSB Chairman Robert Sumwalt, who guaranteed he would lead the probe.

FIU spokeswoman Maydel Santana-Bravo issued a statement, even as rescue crews were still working the scene.

"We are shocked and saddened about the tragic events unfolding at the FIU-Sweetwater Bridge," she said. "At this time, we are still involved in rescue efforts and gathering information. We are working closely with authorities and first responders on the scene. We will share updates as we have them."

The pedestrian walkway was installed in a single morning at Southwest 109th Avenue on Saturday, intended eventually to link FIU's Modesto A. Maidique Campus to the small suburban city of Sweetwater, where the university estimates 4,000 of its students live.

Before Saturday's installation, FIU said the pedestrian bridge used an innovative approach under which a 175-foot section of the overall 320-foot long bridge was fabricated by the side of the Trail while support columns were erected in place.

Over a few hours on Saturday morning, the 950-ton span was lifted off the ground by a mechanical transporter, swung into position across the Trail, then lowered into place over the support columns.

That reduced to a minimum the time the trail had to be closed to traffic, and minimized risks to workers and people in the vicinity, FIU said.

The university's engineering school has an "accelerated bridge" program that develops techniques to speed up bridge construction. The program consulted with builders, designers and engineers early in the process, but was not closely involved in the pedestrian bridge program, a spokeswoman said last week.

There were as yet no stairs or ramps to the bridge, which was not open. Opening was scheduled for early next year.

A citizen panel judging the 395 bids on aesthetic grounds overwhelmingly preferred Figg's design for a signature bridge over Biscayne Boulevard, a key element in the project. But MCM's team alleged that FDOT changed the scoring method to favor the other team's submission. Figg's design for a bridge suspended from cables features two support towers that resemble dancers.

Students and faculty have long been clamoring for a bridge at the 109th Avenue crossing, where students on foot have to get across seven lanes of jam-packed traffic that divide the campus from Sweetwater. Though FIU provides shuttles, many students prefer to walk. In August, FIU undergraduate Alexis Dale was hit and killed by a motorist while crossing the intersection.