Oceans on ancient Mars may have gotten an assist from volcanoes 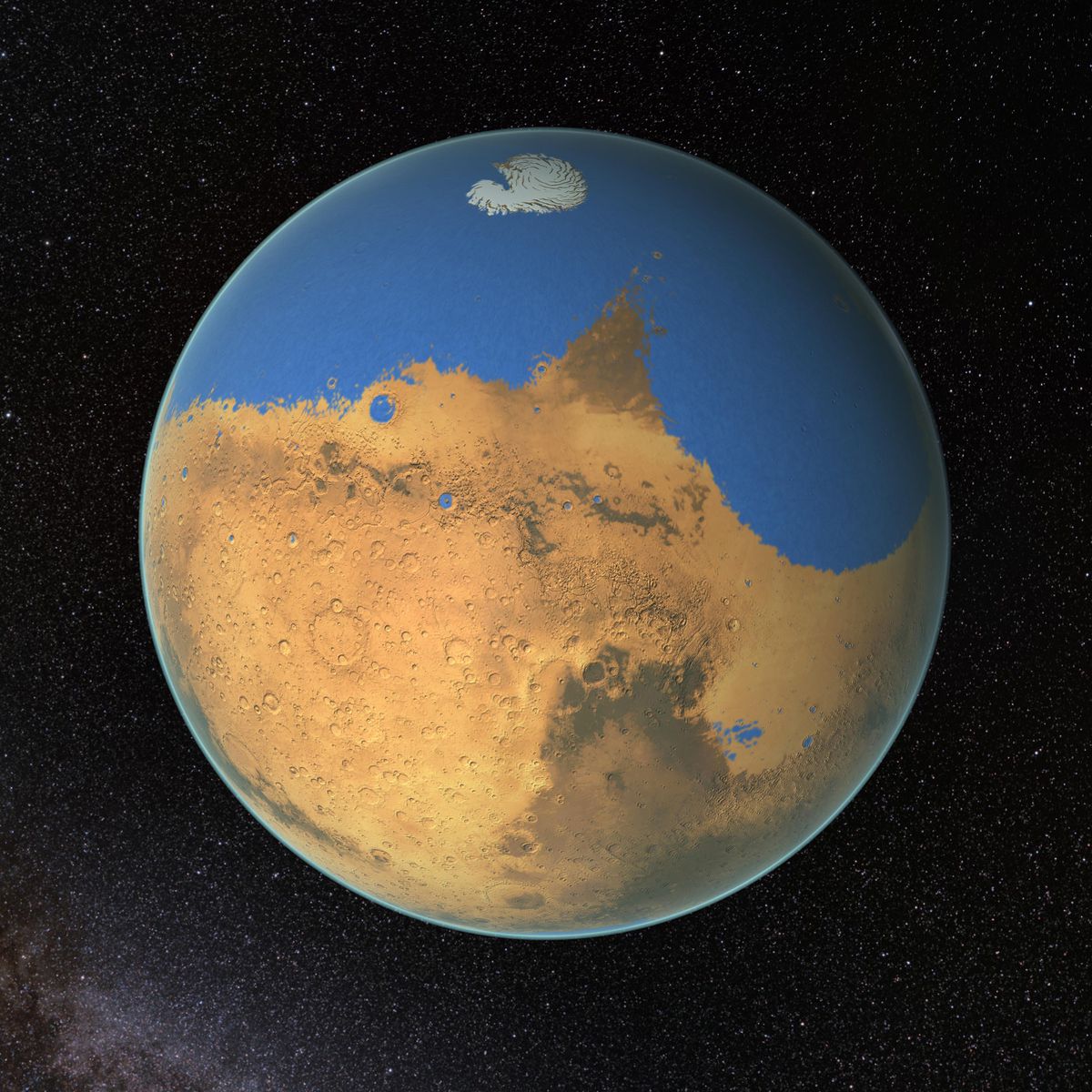 Oceans on Mars formed more than 3.7 billion years ago, earlier than previously thought, and volcanoes might have had something to do with it. (NASA/GFSC)

Oceans on Mars formed more than 3.7 billion years ago, earlier than previously thought, and volcanoes might have had something to do with it. (NASA/GFSC)

The oceans that once covered Mars may have formed somewhere around 3.7 billion years ago, even earlier than previously thought, according to scientists at the University of California, Berkeley.

The findings, published in the journal Nature, highlight a potential link between the birth of Martian oceans and the rise and fall of its volcanic activity.

Billions of years ago, the Red Planet didn't look so different from our own blue-green world, scientists say. It could have had a thick atmosphere, puffy clouds, even lakes and oceans. That's why researchers wonder whether life could have existed on our now-cold, dry neighbor.

[If we ever get to Mars, the beer might not be bad]

One clue that oceans might once have covered much of the planet lies in the shoreline-like features found across the planet's northern lowlands. There's just one problem: Such features should indicate an even sea level at constant elevation, but these marks lie at a wide range of higher and lower elevations, some varying by more than half a mile in height.

Perhaps these marks don't represent shorelines at all, some researchers said. Others have suggested that a shift in the Red Planet's rotation pole could also have forced the shorelines to move.

But scientists have already nixed the latter hypothesis, pointing to the location of a massive Martian feature called Tharsis. Tharsis is a roughly 3,100-mile-wide volcanic plain that holds now-dormant behemoths such as the 25-kilometer-high Olympus Mons, the largest volcano in the solar system. Tharsis probably formed too close to the equator to allow for a dramatic shift in the planet's rotation pole. Without that shift, the shorelines don't end up moving much.

Robert Citron, a UC Berkeley graduate student in planetary science, and his colleagues set out to find a solution to this dilemma, developing a model that looked at how Tharsis' growth changes the shape of Mars. Their model revealed that the oceans (and their mismatched shorelines) may have formed around the same time as Tharsis.

That's because as Tharsis grew it would have deformed the planet, causing a sister bulge to form on the opposite side of the planet and for a depression to develop in between. All this planet-squashing would have changed the shape of the surface enough to cause the oceans to move and the shorelines to shift.

On top of that, the greenhouse gases released by the volcanoes would have warmed the climate and made it easier for water to remain liquid on the surface.

The heat released by the volcanoes could also have triggered massive releases of melted ice or groundwater reserves, which could explain the valley networks cut into the surface, Citron said.

"It informs our history of Mars by making this connection between volcanism at Tharsis and the development of these possible oceans," Citron said. "That says something about possible feedback between the interior and surface and climate."

The researchers say this all might have happened around the same time that Tharsis formed some 3.7 billion years ago. This would make the oceans older than previously thought.

[Erosion is revealing surprising amounts of water ice on Mars]

This is still just an idea, Citron pointed out. And there's still work to be done to better understand the volcano-ocean relationship.

"One of the big questions about Mars is whether early oceans can remain stable, because climate models have struggled to explain how liquid oceans would remain stable for long periods during Mars's early evolution," Citron said.

The next step, he added, might be to figure out exactly how much volcanism a planet like Mars would need to keep an ocean of water stable on the surface.