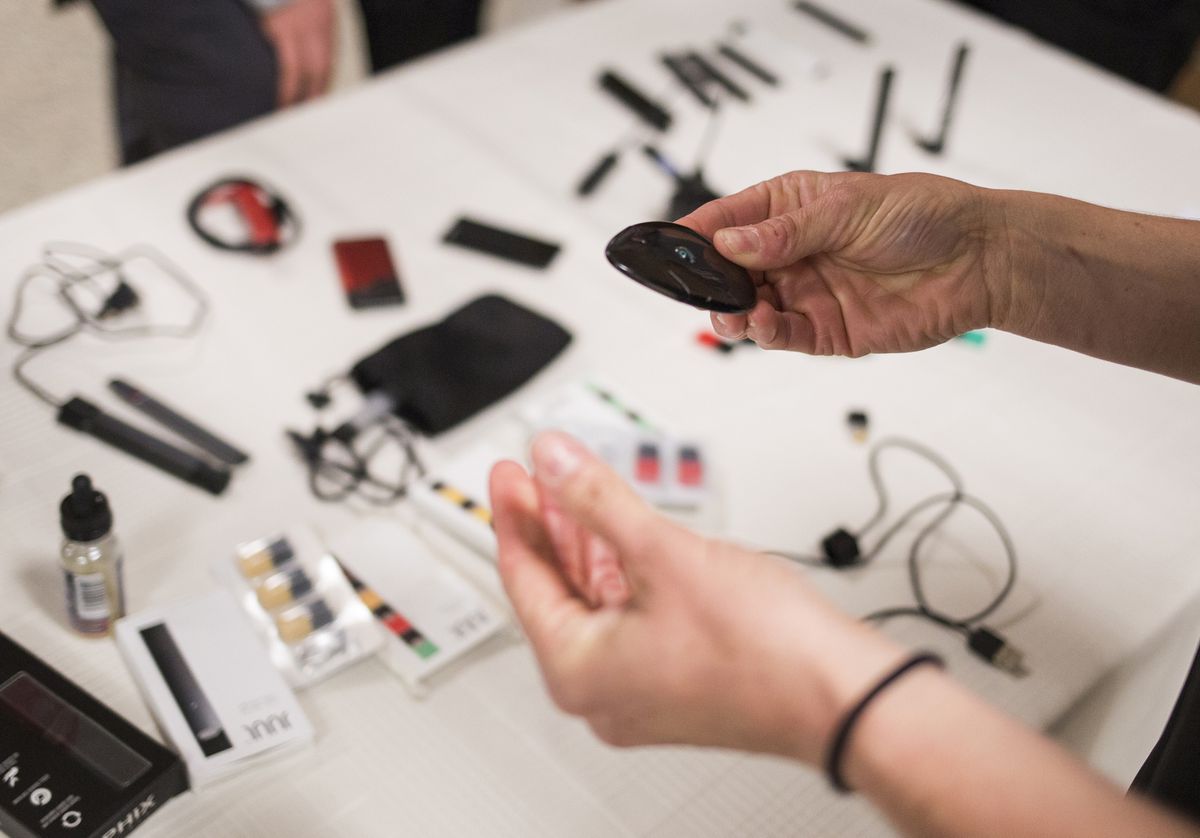 Liz Blackwell, a school nurse with Boulder Valley School District, shows a collection of vape pens that have been confiscated from students during a presentation at Nevin Platt Middle School in Boulder, Colo., on March 22, 2018. School and health officials struggling with a sudden influx of easily concealed e-cigarettes fear vaping is creating a new generation of nicotine addicts. (Nick Cote/The New York Times)

Liz Blackwell, a school nurse with Boulder Valley School District, shows a collection of vape pens that have been confiscated from students during a presentation at Nevin Platt Middle School in Boulder, Colo., on March 22, 2018. School and health officials struggling with a sudden influx of easily concealed e-cigarettes fear vaping is creating a new generation of nicotine addicts. (Nick Cote/The New York Times)

The student had been caught vaping in school three times before he sat in the vice principal's office at Cape Elizabeth High School in Maine this winter and shamefacedly admitted what by then was obvious.

"I can't stop," he told the vice principal, Nate Carpenter.

So Carpenter asked the school nurse about getting the teenager nicotine gum or a patch, to help him get through the school day without violating the rules prohibiting vaping.

E-cigarettes have been touted by their makers and some public health experts as devices to help adult smokers kick the habit. But school officials, struggling to control an explosion of vaping among high school and middle school students across the country, fear that the devices are creating a new generation of nicotine addicts.

In his four years at Cape Elizabeth, Carpenter says he can't recall seeing a single student smoke a cigarette. But vaping is suddenly everywhere.

"It's our demon," he said. "It's the one risky thing that you can do in your life — with little consequence, in their mind — to show that you're a little bit of a rebel."

Schools say the problem sneaked up on them last fall, when students arrived with a new generation of easily concealed devices that have a sleek high-tech design. The most popular, made by Juul, a San Francisco-based company that has received venture capital money, resemble a flash drive and have become so ubiquitous students have turned Juul into a verb.

Tasting like fruit or mint, these devices produce little telltale plume, making it possible for some students to vape in class.

"They can pin them on to their shirt collar or bra strap and lean over and take a hit every now and then, and who's to know?" said Howard Colter, the interim superintendent in Cape Elizabeth.

E-cigarettes are widely considered safer than traditional cigarettes, but they are too new for researchers to understand the long-term health effects, making today's youth what public health experts call a "guinea pig generation."

School and health officials say several things are clear though: Nicotine is highly addictive, the pods in vaping devices have a higher concentration of nicotine than do individual cigarettes, and a growing body of research indicates that vaping is leading more adolescents to try cigarettes.

"We do not want kids using our products," she said. "Our product is not only not for kids, it's not for non-nicotine users."

She said schools and the e-cigarette industry need to work together to understand why teenagers are vaping, and suggested that stress is a big reason. To that end, she said, Juul has offered schools a curriculum that includes mindfulness exercises for students to keep them away from the devices the company sells.

"We saw the same thing from Philip Morris with the We Card program, and the evaluation was that those things don't work," Jennifer Kovarik, who runs tobacco prevention programs for Boulder County, Colorado, said of the company's efforts to keep their products away from teenagers. "If they didn't want youth to use it, it would be sold in 18-and-over-only establishments. It's available at Circle K's across the country."

E-cigarettes deliver nicotine through a liquid that is heated into vapor and inhaled, cutting out the cancer-causing tar of combustible cigarettes. But vaping liquids contain additives such as propylene glycol and glycerol that can form carcinogenic compounds when they are heated. Diacetyl, a chemical used to flavor some vape "juice," has been linked to popcorn lung, the scarring and obstruction of the lungs' smallest airways. A study published in the journal Pediatrics in March found substantially increased levels of five carcinogenic compounds in the urine of teenagers who vape.

"I'm afraid that we're going to be hooking a new generation of kids on nicotine, with potentially unknown risks," said Dr. Mark L. Rubinstein, lead author of the study and a professor of pediatrics at the University of California, San Francisco. "With cigarettes, we've been studying them for many years, we have a pretty good idea of what the risks are. We just don't know what the risks of inhaling all these flavorings and dyes are, and what we do know is already pretty scary."

The industry points to a 2016 British study that says that vaping does not lead nonsmokers to become smokers. But the 2016 Monitoring the Future study, sponsored by the federal government's National Institute on Drug Abuse, followed students who in 12th grade had never smoked a cigarette and found that a year later, those who used e-cigarettes were about four times as likely to have smoked a cigarette. A study released in January by the National Academies of Sciences, Engineering and Medicine similarly concluded that vaping led students to smoke cigarettes, although it did not determine whether they became habitual smokers or just experimented.

Schools and local officials have stiffened penalties for students caught with vaping devices, suspending and even expelling them, and sent home letters pleading with parents to be on the lookout for a waft of fruit smell and, as one superintendent wrote, "'pens' that aren't pens."

Several school districts in New Jersey have recently adopted policies requiring any student caught with an e-cigarette to be drug tested, because the devices can be used to smoke marijuana.

Oak Ridge High School in Placerville, California, shut down all but two bathrooms during classes in November and placed monitors at the doors during lunch to make sure not too many students are in the bathroom together. (Juul devices, for example, contain as much nicotine as a pack of cigarettes, so they are easy to share.) New Trier High School in Chicago's northern suburbs is considering installing vaping detectors in bathrooms.

With so many students caught multiple times, some schools have moved from punishment to intervention, requiring students caught vaping to receive counseling or substance abuse treatment.

"Despite all of the boundaries set by families and parents and the schools, and at risk of even expulsion, students are continuing to use," said Liz Blackwell, a school nurse in the Boulder Valley School District in Colorado. "They continue to use because it's an addiction."

As part of her treatment plan, one of Blackwell's students asked if she could stand at the back of the class and shake her foot when she started to feel the twitch to vape.

The 2017 Monitoring the Future survey on adolescent drug use found that 24 percent of high school seniors reported vaping daily, which the study defined as vaping on 20 or more occasions in the previous 30 days, said Richard A. Miech, a professor at the Institute for Social Research at the University of Michigan and a principal investigator of the study.

Fifty-six percent reported vaping only on one to five occasions. Gregory Conley, president of the American Vaping Association, which supports what he calls "fair and sensible" regulation of e-cigarettes, said that number indicated that most students who are vaping are not becoming addicted. "You can't use the definition of dependence and apply it to anyone using only one to five days in the prior month," he said.

Schools say that unlike adults, most students who vape are starting out as nonsmokers.

"I have the same conversation with every student we catch vaping," said Scott Carpenter, the dean for discipline at Cumberland High School in Rhode Island. "I say, 'If I handed you a cigarette would you smoke it?' And 100 percent of them look at you like you're absolutely crazy for even suggesting that they'd do that."

Federal law prohibits the sale of e-cigarettes to anyone under 18, and Juul and some other e-cigarette companies ask web purchasers to check a box saying that they are 21 or older. But the growing vaping industry has many items and campaigns that seem to appeal specifically to youth. There are vaping cloud contests, a line of hoodies and backpacks called VaprWear that make it easy to conceal the devices, and labels of vape "sauce" that resemble the designs of well-known candy wrappers like those of Jolly Ranchers and Blow Pops.

In Millburn, New Jersey, one of the school districts that now require any student caught with a vaping device to be drug tested, teenagers said Juuls began showing up at parties last year, and by fall were at school and football games. Now, students post videos of themselves doing vapor tricks on social media.

At a local deli where seniors go for lunch, a dozen students interviewed said it was easy to buy a Juul online or at a gas station or convenience store, and to buy refill pods in the hallway at school. None would publicly admit to owning a device, but all said they had tried vaping.

Ryan Wenslau, 18, said he thought vaping started for most students as an occasional diversion, "something to do." For those who continue, "I wouldn't necessarily call it an addiction," he said, "but it's habitual."

While there might be chemicals in vaping, they argued, there are more in cigarettes.

Schools lament that teenagers equate safer with safe. But many say the unfamiliarity of e-cigarettes has made it hard to convince parents of the risks as well.

"If I had a pack of cigarettes in my room as a kid, that would have been discovered, here we're dealing with, first of all, what's a Juul?" said Michael McAlister, principal at Northgate High School in Walnut Creek, California. The school has about 1,600 students, but parent education nights on the issue have turned out only about 70 people. Yet, out of 53 suspensions last year, 40 were for vaping devices.

"We're losing a battle and to me, it's predatory," McAlister said. "There's no way you're going to suspend your way out of this."