Islamic State leader in Afghanistan is killed in U.S. airstrike 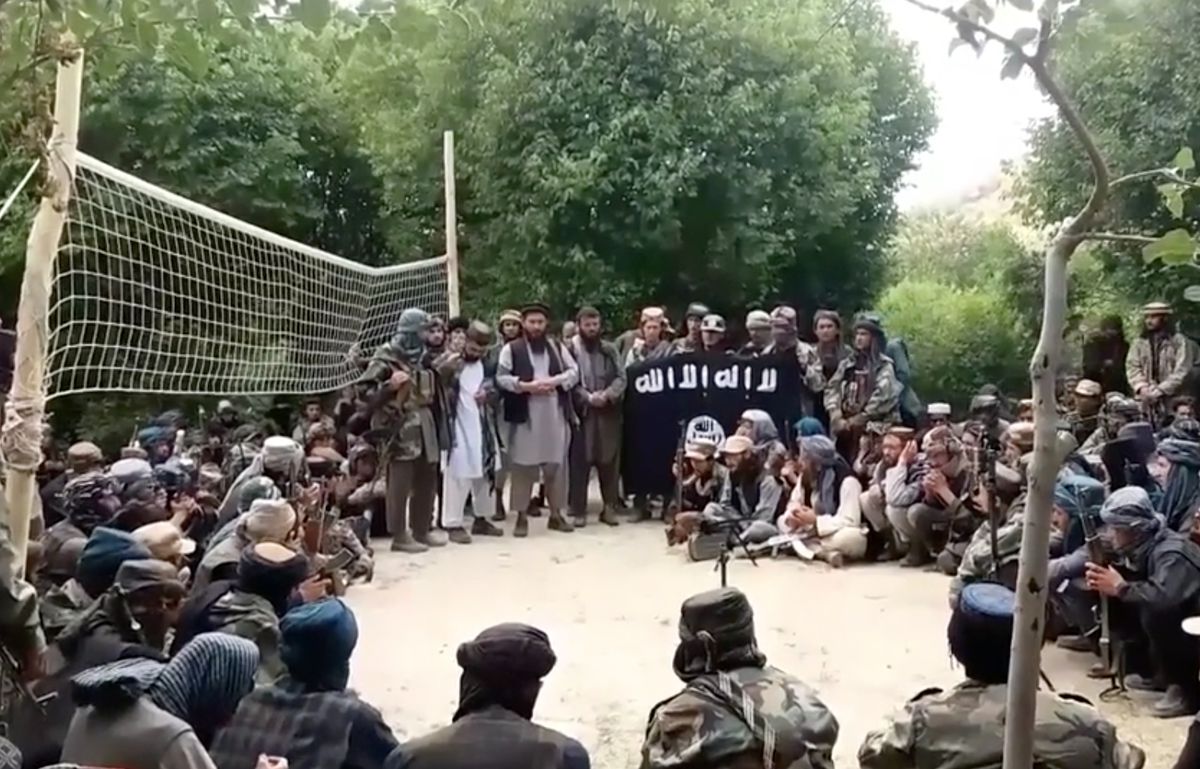 In an image provided by the Defense Visual Information Distribution Service, Qari Hekmatullah, who is standing with a black flag to his left in this video still. An American airstrike killed Hekmatullah, the leader of the Islamic State group in northern Afghanistan, the latest in a series of crippling setbacks for the extremist organization in the country, according to American and Afghan officials on April 9, 2018. (Via Defense Visual Information Distribution Service via The New York Times)

In an image provided by the Defense Visual Information Distribution Service, Qari Hekmatullah, who is standing with a black flag to his left in this video still. An American airstrike killed Hekmatullah, the leader of the Islamic State group in northern Afghanistan, the latest in a series of crippling setbacks for the extremist organization in the country, according to American and Afghan officials on April 9, 2018. (Via Defense Visual Information Distribution Service via The New York Times)

KABUL, Afghanistan — A U.S. airstrike killed the leader of the Islamic State group in northern Afghanistan, the latest in a series of crippling setbacks for the extremist organization in the country, according to U.S. and Afghan officials on Monday.

Nicholson described the killing as a joint operation between U.S. Special Operations troops and Afghan Special Security Forces, and said it was the latest in a series of successful efforts to kill Islamic State leaders. "ASSF and U.S. counterterrorism forces killed Hekmatullah and they will kill any successors," Nicholson was quoted as saying. "IS-K will be eliminated."

The spokesman for the Afghan Ministry of Defense, Brig. Gen. Mohammad Radmanish, said that Afghan-operated drones had tracked Hekmatullah to his hiding place. Afghan officials cited photographs apparently showing Hekmatullah's body as confirmation of his death.

The killings followed a series of setbacks over the past year for the Islamic State in Nangarhar province, in eastern Afghanistan. U.S. strikes have killed Islamic State "emirs" and other leaders in that region, while government ground forces, supported by U.S. Special Operations troops and air power, have driven the group from many areas it had previously held in the province. A New York Times reporter who visited the IS-K stronghold of Achin district recently found government forces firmly in control there.

The Islamic State has also lost most of its territory in Syria and Iraq in recent months, including its de facto capital of Raqqa, Syria, prompting U.S. officials to express concern that the organization would turn its attention to Afghanistan. They cited a promotional video from the Islamic State extolling the virtue of fighting in Khorasan — the group's name for Afghanistan and Pakistan — and particularly in the northern province of Jowzjan in Afghanistan.

The killing of Hekmatullah led to immediate infighting among rival factions of insurgents, who disagreed on whom his successor should be, Afghan government officials in the area said.

Hekmatullah, an ethnic Uzbek, was a fearsome presence in Jowzjan, a predominantly Uzbek region. As a former Taliban commander in his area, the district of Darzab, he became notorious for such extreme savagery that the Taliban expelled him from the organization, and he joined the Islamic State. Previously, he had also been a leader of the extremist Islamic Movement of Uzbekistan.

Nicholson said Hekmatullah's death was a blow to the group's operations.

"IS-K in Jowzjan province is the main conduit for external support and foreign fighters from Central Asian states into Afghanistan," he said. "Hekmatullah was the key leader for those operations," he added.

Afghan officials described Hekmatullah as running Islamic State in Khorasan operations not only in Jowzjan, but also in the provinces of Sar-i-Pul and Faryab, which are also in the north. According to the Jowzjan deputy police chief, Hafiz Khashi, after Hekmatullah's death, three factions of his Islamic State followers began fighting one another to determine who would take his place.

He said those factions included foreign fighters from places including Chechnya and Syria, followers of Hekmatullah from his home district, and Islamic State fighters from elsewhere in Afghanistan who had joined his forces in the north.

The governor of Jowzjan, Maulvi Lutfullah Azizi, said the killing of Hekmatullah, and the infighting that resulted, had come just in time to prevent Hekmatullah's fighters from overrunning government forces holding the district center of Darzab.

"He was very powerful and commanded up to 500 armed fighters," Azizi said. "When he and his bodyguard were killed, his forces were within 50 meters of the district center."

Hundreds of miles to the southeast, the district of Achin, in Nangarhar, heavily dominated by the Islamic State in Khorasan a year ago, is now largely under government control, according to officials and village elders there. Mohammad Ismail Shinwari, the governor of Achin, said schools were reopening and 4,000 displaced families had returned, although another 2,000 families were yet to come back.

"ISIS is no longer strong in this district," he said, using an alternative name for the Islamic State.

The Islamic State has proved capable of replenishing its forces in the past, however. Last April, for instance, the U.S. military said it had reduced the extremists' numbers from 3,000 to 700. Then, last December, Nicholson said that another 1,600 fighters had been "removed from the battlefield," particularly in eastern Afghanistan.
(STORY CAN END HERE. OPTIONAL MATERIAL FOLLOWS.)
A New York Times reporter traveled late last month through Achin to the front lines, where fighting against the Islamic State was still underway, although government forces had made major inroads.

On the 15-mile trip from the district center to the front line, the reporter saw only two civilian cars, and numerous ruined and burned homes, charred fields and uncollected harvests. Along the way were four bombed-out cars; the unclaimed, dried-out bodies of what officials said were five Islamic State militants lay by the roadside. U.S. military aircraft patrolled the area constantly, and bombing could be heard in the distance.

In Mamand Valley, once a stronghold of the Islamic State in Achin, the government has taken back 80 percent of the territory from the extremists, according to Shinwari, the local governor.

Waris Khan, 50, was one of those who returned to his home in the valley as a result, but he said he was skeptical about the future.

"If these forces who carried out the clearance operation here leave this area, the local police will be not able to keep this area under their control for even one day," he said.

Even as it has lost territory in the north and east of Afghanistan, the Islamic State faction has apparently been stepping up suicide bombings in the capital, Kabul, claiming responsibility for a series of deadly assaults, mostly on targets in Shiite neighborhoods. Both Afghan and U.S. officials have, however, expressed doubt about whether those attacks were really carried out by the Islamic State, or by Taliban factions.