Lost in battle, found by amateur sleuths: An ‘unknown’ Marine 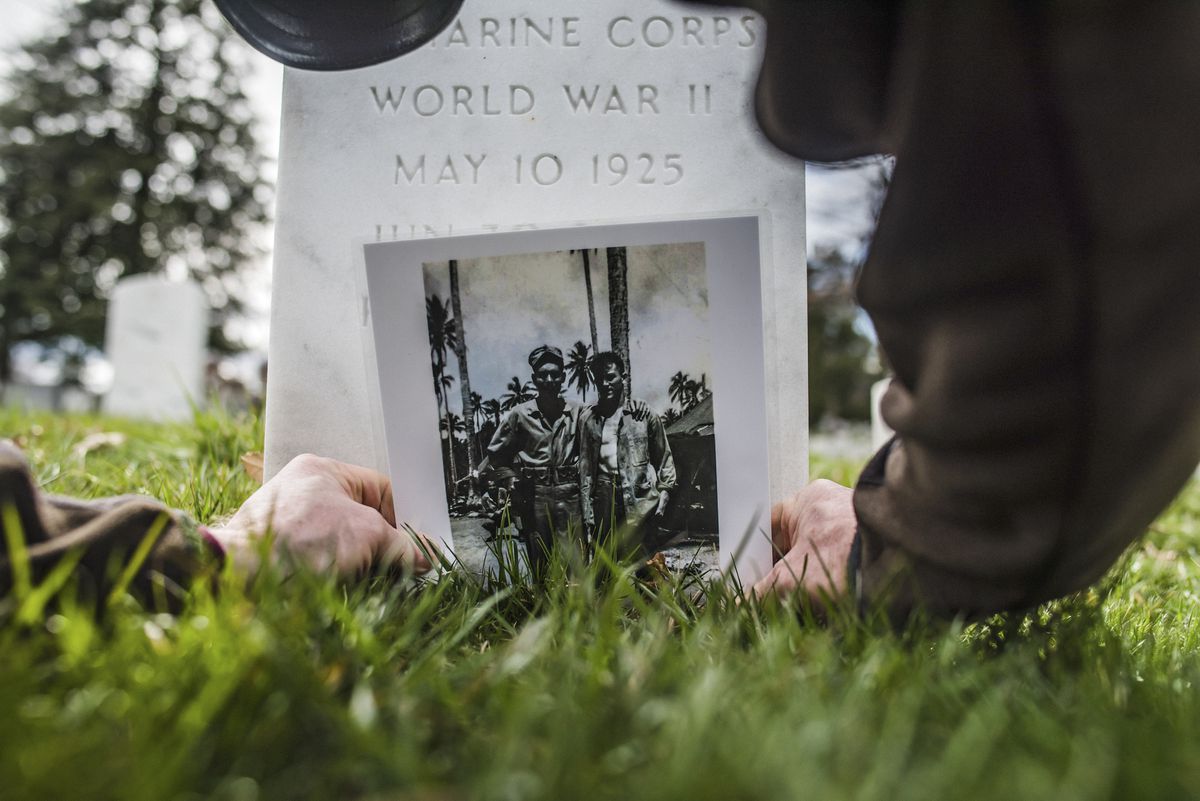 WASHINGTON — A mystery that went unsolved for 73 years began when Herman Mulligan threw a grenade.

In the thick of some of the most vicious fighting of World War II, on the island of Okinawa, Pfc. Mulligan's grenade clattered into the dark maw of a Japanese bunker and blew up a cache of ammunition. The huge explosion obliterated most of the hillside, and blasted the 21-year-old Marine beyond recognition.

Amid the chaos, his unidentified body was buried in a hasty battlefield grave, while the Marine Corps listed Mulligan as missing in action. In the years after the war, he was reclassified as "unrecoverable," and the family that knew him gradually died off, until his memory was almost as lost as his bones.

The private's story could have ended there, among the roughly 72,000 American troops from World War II who have not been accounted for. But the ending has been rewritten by a black-and-white snapshot found in a Marine veteran's trunk.

The photo inspired an informal network of volunteer sleuths to track down survivors of the battle, pore over forgotten maps and comb through yellowed files until they had traced Mulligan's likely remains to a burial plot under a marble cross in Manila. Then they found a cousin, James Patterson, who could provide DNA for matching.

In March, Marines in dress uniform knocked at the Patterson home near Charlotte, North Carolina, where the private's Purple Heart and dog tags have been on display for years near the front door. Mulligan, they said, had been found.

Until recently, the kind of detective work that brought the lost Marine home was largely handled by a small group of federal researchers at the Defense POW/MIA Accounting Agency, the arm of the Pentagon responsible for finding and returning lost war dead. Now, though, terabytes of digitized military records can be searched and shared over the internet, and a growing number of war dead are being found by members of the public, often working in their spare time.

In many cases, it turns out that the dead are not missing, just their names. U.S. military cemeteries like the one in Manila hold 8,500 unknown remains, most from World War II, but the Accounting Agency generally does not focus on those cases. Troops in cemeteries, even if unidentified, have at least been buried with honor, the agency argues, so it concentrates instead on locating remains that never made it to a cemetery: infantrymen lost in a jungle ambush, say, or aircrews scattered by a mountainside plane crash.

That has left thousands of open cases that attract amateur investigators.

"A lot of these guys are pretty easy to sort out, but the agency has other priorities," said John Eakin, a Vietnam veteran who waged a five-year legal battle with the agency, trying to compel it to test the remains in a grave in the Philippines where he believed his cousin was buried. (He turned out to be right.)

[Marked dead in Vietnam, one Marine's long journey back to life]

The accounting agency, with an annual budget of more than $130 million, has long been criticized for clearing few cases. On average it identifies only about 100 remains a year; the figure rose to 201 in 2017 mainly because it started exhuming more unknowns like Mulligan.

The agency said in a statement that "staff are systematically reviewing unknown files to see if a case for exhumation can be made," and that to go ahead, officials must be persuaded the remains are "more likely than not" to be positively identified.

The search for Mulligan started with a blood-flecked Japanese flag that Dale Maharidge, a Pulitzer Prize-winning author who teaches journalism at Columbia University, found among his father's things after he died.

Maharidge's father had been a Marine on Okinawa, and the flag was a souvenir taken from the brow of a dead Japanese soldier and signed by more than a dozen Marines. His father had come home from the war haunted by combat and unwilling to talk about it, but for the rest of his life, he kept a dog-eared snapshot of a buddy he lost in combat — Mulligan.

Maharidge decided to track down the men of the flag, and ultimately the man in the snapshot.

"I thought by finding Mulligan, maybe I could finally understand my dad, and put some of his demons to rest," Maharidge said.

He hunted for years, cold-calling hundreds of men with names like those on the flag, and eventually found a few Marine veterans who helped him piece together what happened on Okinawa. He wrote a book about the search, "Bringing Mulligan Home." But he finished it resigned to the idea that the man in the snapshot would never actually be brought home.

Mulligan worked in a textile mill as a teenager in Greenville, South Carolina, before the war, and lied about his health to get into the Marines, hiding his hemophilia. He saw fierce fighting in Guam and then hit the beach on Okinawa, where his regiment fought for weeks to pry Japanese defenders from the hillside tombs that they used as bunkers.

On May 30, 1945, Mulligan threw his fateful grenade into one of the tombs, not knowing it was packed with explosives.

"The whole hillside blew out at him," a veteran told Maharidge. "He got hit in the face."

A few men remembered carrying the bloodied private to an aid station, but did not know what happened to him after.

Maharidge asked the accounting agency for help finding Mulligan in 2011, but "I just ended up getting shuffled around," he said. "No one ever did anything."

[This Filipino-American WWII veteran lived to 104 in Anchorage. He's finally been recognized for his service.]

By the time he published "Bringing Mulligan Home" in 2013, the title had changed from a quest to a metaphor — a reminder that the past can be as acrid and hard to grasp as battlefield smoke. His failure to find answers left him so drained that he did not write again for more than a year.

But once in the public eye, Mulligan's story took on a life of its own.

An amateur genealogist in Virginia named Bridget Carroll heard Maharidge give a radio interview and sent him an email offering to help. "I love a mystery," she told him.

Before long, she had found Mulligan's cousin, James Patterson.

"We had his Purple Heart sitting here in the house, but didn't know a thing about it," said Patterson's wife, Jean. "But then I read the letters of his family trying to find him after the war, and it broke my heart."

She joined the search. The family provided DNA to the agency that could identify Mulligan, and urged the agency to begin a search, but she said the agency seemed to do little. Two years later, she spotted a Facebook post announcing that dozens of Marine remains had been recovered by independent researchers on the island of Tarawa, and posted a comment saying she hoped Mulligan was among them.

Robert Rumsby, a former Army lieutenant who had worked on the Tarawa excavations, saw her comment and responded. He had developed a passion for World War II, and though he was only 26 at the time, he had already spent years indexing unknown graves from the war.

"This guy was a nobody, just a grunt everyone had forgotten," Rumsby said of Mulligan. "But that's why we had to find him. Nobody deserves to be left behind."

Rumsby knew that World War II dead were typically buried in temporary cemeteries close to the fighting, in rows usually filled chronologically. He used an old map of the plots on Okinawa to look for unknowns buried shortly after Mulligan died. There were only two, and one of them, in a grave labeled X-35, looked promising.

After the war, the Army recorded details of each set of unknown remains in records known as X files that are now digitized and widely shared by researchers. The files showed that X-35 had been exhumed and sent to Saipan to be identified, along with thousands of others. Although the grave contained socks stenciled with the name Mulligan, no match was made, and the remains were reburied in 1950 in a U.S. cemetery in Manila.

Rumsby compared the file for X-35 to Mulligan's personnel file in 2016 and found several points of agreement. A group of dentists then volunteered to examine dental records, and found that they matched.

The Patterson family submitted the findings to the agency in fall 2016 with fingers crossed, knowing that strong evidence was no guarantee that the agency would take action. Some seemingly rock-solid cases have languished for decades.

Pressed by the family and their senators and congressmen, the agency exhumed X-35 in spring 2017 and sent a section of tibia to the military's DNA lab in Maryland to be compared with the sample supplied by James Patterson (he died in July 2017). The results were a match.

"I don't believe in closure, I don't think we ever really get over anything," Maharidge said a few days after hearing the news. "But this feels pretty good."

Earlier this month, Maharidge, the author who started the quest, walked through the ghostly marble headstones of Arlington National Cemetery with Rumsby, the researcher who had connected the crucial dots. They stopped at the grave of Maharidge's father and Maharidge produced a bottle of respectable 10-year-old bourbon.

There was an empty plot three spaces to the north, where they hoped to bury Mulligan. The sun was setting, and in the distance, a bugler sounded taps at the Tomb of the Unknowns.

Maharidge poured glasses of bourbon, then paused to splash a bit from the bottle onto the grass.

"The dead drink first," he said.