Ecstasy as PTSD relief for soldiers: ‘I was able to forgive myself’ 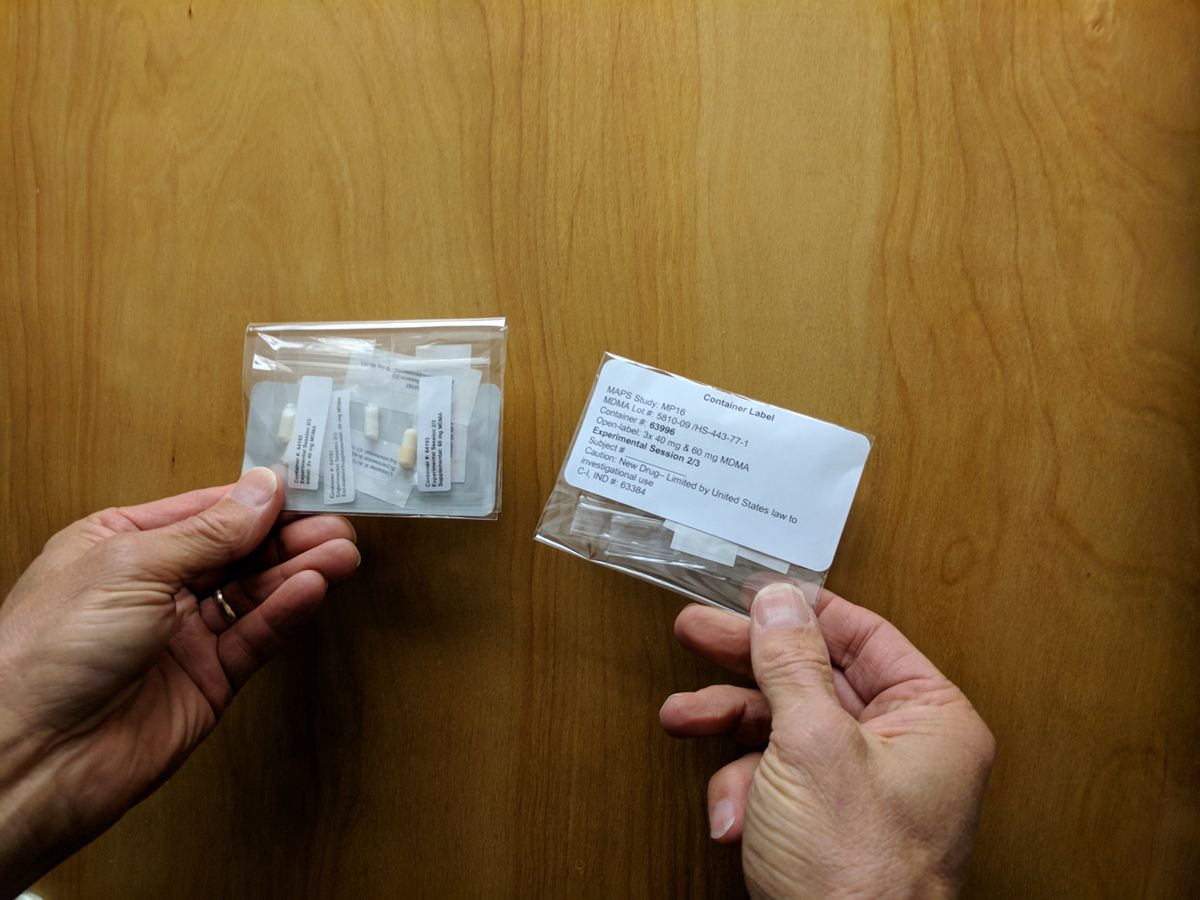 Packets of MDMA, often used as a party drug and known as Ecstasy or Molly. A majority of 26 combat veterans and first-responders with chronic PTSD who had not been helped by traditional methods saw dramatic decreases in symptoms after taking MDMA, according to a study published on May 1, 2018. (Multidisciplinary Association for Psychedelic Studies via The New York Times)

Packets of MDMA, often used as a party drug and known as Ecstasy or Molly. A majority of 26 combat veterans and first-responders with chronic PTSD who had not been helped by traditional methods saw dramatic decreases in symptoms after taking MDMA, according to a study published on May 1, 2018. (Multidisciplinary Association for Psychedelic Studies via The New York Times)

The drug known by the street names Ecstasy or Molly could be a promising treatment for post-traumatic stress disorder, according to a new study.

Research published Tuesday in the British journal The Lancet Psychiatry found that after two sessions of psychotherapy with the party drug, officially known as MDMA, a majority of 26 combat veterans and first-responders with chronic PTSD who had not been helped by traditional methods saw dramatic decreases in symptoms.

The improvements were so dramatic that 68 percent of the patients no longer met the clinical criteria for PTSD. Patients taking the drug also experienced "drastic" improvements in sleep and became more conscientious, according to the study.

The results, which mirror those of similar, small-scale studies of the illegal drug in recent years, come as MDMA is about to enter larger, Phase 3 trials this summer. Based on previous results, the Food and Drug Administration has given MDMA breakthrough therapy status, which could speed approval. If large-scale trials can replicate safety and efficacy results, the drug could be approved for legal use by 2021.

[Prospect of government-sanctioned psychedelic generates both excitement and concern]

"I was finally able to process all the dark stuff that happened," Nicholas Blackston, 32, a study participant who had been a Marine machine-gunner in Iraq, said in an interview. "I was able to forgive myself. It was like a clean sweep."

But the possible legalization of a widely abused party drug raises a lot of questions.

No one goes home with a bottle of Ecstasy.

If approved by the FDA, MDMA would only be administered by a licensed therapist. First, a patient goes through three sessions of psychotherapy. In the fourth session, the patient takes a pill.

After taking the drug, the patient lies on a futon amid candles and fresh flowers, listening to music. Two therapists — one female, one male — sit at the patient's side as guides. That session lasts eight hours.

"We encourage them to set aside all expectation and agenda and be open. Experiences tend to be very individual," said Dr. Michael Mithoefer, one of the principal researchers.

The drug floods the brain with hormones and neurotransmitters that evoke feelings of trust and well-being, users report. Researchers say this allows patients to re-examine traumatic memories.

In follow-up psychotherapy, patients process emotions and insights brought up during the MDMA session. The current protocol calls for patients to take MDMA two or three times, each a month apart, interspersed with psychotherapy.

"The MDMA alone or the therapy alone don't appear to be as effective," Mithoefer said. "The MDMA seems to act as a catalyst that allows the healing to happen."

— What do patients say about it?

"I was actually able to forgive myself," said Nigel McCourry, 36 a Marine veteran who was deployed in 2004 to Fallujah, Iraq, whose experiences mirrored those of three other patients interviewed.

McCourry came home from war unable to escape scenes of an explosion that nearly killed him, and haunted by the memory of two young girls he accidentally killed in a firefight. He struggled to sleep. He drank to forget. Rage eroded most of his relationships.

He tried help at a Veterans Affairs hospital, but could not let his guard down enough to benefit from standard psychotherapy. A handful of medications meant to help left him feeling like a zombie, and he gave them up. He was contemplating suicide when he tried MDMA.

"When it kicked in, it was like an epiphany," he said. "I could see all these things from combat I was afraid to look at before, and I had a totally new perspective. I relived the parts of me I had lost. I realized I had viewed myself as a monster, and I was able to start to have some compassion for myself. It was a turning point, and for the next year I continued to get better."

"There are also still some challenges I have to face from time to time related to the PTSD," he added. "But now I am able to work through them without getting stuck."

[Finding peace after war through the outdoors]

— But does it actually work?

Large-scale trials, which will include up to 300 participants at 14 sites, may not be able to replicate the success of previous trials, which were limited to a few dozen patients. But so far, results are encouraging. Nearly all patients saw clinically significant reductions in symptoms, and a majority saw such drastic reductions that they no longer met the criteria for a PTSD diagnosis. In the 12 months after MDMA therapy, PTSD symptoms generally continued to decrease.

Side effects, including anxiety, headache, fatigue, muscle tension and insomnia, were generally minor and limited to the days following the MDMA sessions.

Other researchers, intrigued by the results, are starting their own studies of MDMA therapy, including the Department of Veterans Affairs.

— Seems risky. Isn't there something better?

Not really, said Dr. John Krystal, who heads the Neurosciences Divisionat the Department of Veterans Affairs National Center for PTSD. He described the current lack of effective therapy as "a crisis."

"The problem is that we don't have many treatments and what we have doesn't work that well," he said.

Only about 1 in 3 combat veterans with PTSD are effectively treated, he said.

Doctors often use a combination of off-label drugs to try to manage patients' nightmares, flashbacks and depression, but the drugs do nothing to treat the underlying condition, and can have negative side effects.

Psychotherapy also has limitations. Though many patients find it helpful, others find it too traumatizing or ineffective and quit therapy. In some studies, dropout rates were as high as 40 percent.

— Who is behind these studies?

Not big pharma. The research is organized by a small nonprofit called the Multidisciplinary Association for Psychedelic Studies, or MAPS, which was created in 1986 shortly after MDMA was outlawed.

"No one else would touch this, so we had to do it," said the founder of MAPS, Rick Doblin, who has a doctorate in public policy from Harvard and has made legalizing MDMA his life's work.

The Phase 3 trials are expected to cost $27 million.

— Where does the money come from?

It is all donations. And they have come from an odd array of sources. David Bronner, the vegan CEO — that's Cosmic Engagement Officer — of Dr. Bronner's Magic Soaps and an unapologetic evangelist for psychedelics has given $5 million.

But also in the mix are the archconservative Mercer family, who typically fund right-leaning institutions including Cambridge Analytica and Breitbart News; the late Richard Rockefeller, a champion of public health; and an anonymous donor known only as Pine, who transferred $5 million in bitcoin.

— Does this mean people can just self-medicate with MDMA?

People already are. The National Survey on Drug Use and Health found that in 2014 more than 17 million Americans reported using MDMA. While many are likely doing it purely for recreation, word of the therapeutic uses has spread, and combat veterans are trying it illegally at home.

But street Ecstasy is dangerous. Doses of the street drug can be an unknown mix of other stimulants and hallucinogens, and an overdose can be fatal. High frequency use of MDMA can also damage the brain.

— Who cashes in if MDMA becomes legal?

MAPS would at first. MDMA was originally patented by pharmaceutical giant Merck in 1912, but it was never marketed and the patent lapsed. The FDA grants temporary "data exclusivity" to groups that show new uses for drugs with expired patents. That would give MAPS a five-year monopoly in the U.S. After that, other companies could make it.

MAPS plans to spin off sales to a for-profit benefit corporation, which would then funnel the money back into clinical research on the use of MDMA with other disorders.

Yes and no. MDMA is an illegal drug and has never been approved for any use by the FDA. But for about a decade before it was outlawed in 1985, it was used as an aid in psychotherapy, especially on the West Coast.

At the time, academics were beginning to argue that it and other psychedelic drugs could be a useful ally in psychotherapy. The idea failed to gain traction then, but now a number of prestigious researchers are studying the potential therapeutic uses of LSD, psilocybin and MDMA.