Erupting Hawaii volcano could next spew 10-ton boulders from its summit, scientists say 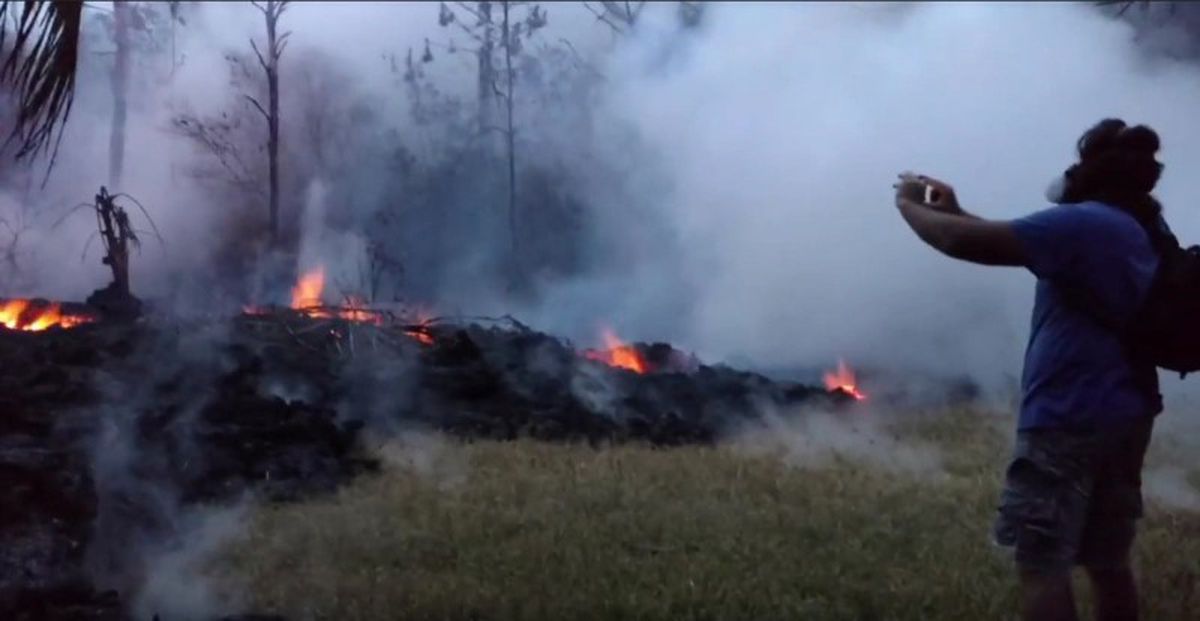 The ongoing surge in volcanic activity on Hawaii's Big Island soon could cause a massive explosion from a volcano's summit, scientists and Hawaii officials warned Wednesday.

Kilauea, the longest-erupting volcano on the planet, has displaced some 1,700 people and destroyed 36 structures since a shifting flow of underground magma last week burst through the surface in a residential neighborhood about 40 miles from the top of the volcano, unleashing torrents of molten rock and toxic gases.

Scientists with the U.S. Geological Survey's Hawaiian Volcano Observatory said Wednesday that the movement of magma from the summit out toward the Leilani Estates neighborhood, where 14 fissures have opened in the past week, has caused the lava lake at the top of the volcano to drop in elevation.

When that lava lake meets the ground water level – which they think is most likely to happen sometime in the next few weeks – it could lead to a series of powerful steam explosions that could shower the surrounding area in 10-ton molten rocks and spew ash as far as 20 miles downwind, the scientists said during a conference call with reporters.

"If an explosion happens, there's a risk at all scales," said Donald Swanson, a USGS volcanologist. "If you're near the crater, within half a mile, you could be subject to ballistic blocks weighing as much as 10 or 12 tons." If you're within several miles, you could be within range of smaller rocks the size of marbles, he said, and 20 miles downwind "you would see fine ash floating from the sky like snow."

Scientists said the occurrence of an explosion or multiple explosions would be contingent on a rock fall within the volcano's inner tunnel or conduit – and there have been frequent rockfalls so far in this eruption – once the magma in that tunnel has dropped to meet the ground water, creating steam.

A rock fall could create a dam, causing the steam to build pressure until it bursts through the dam as an explosion. But the scientists cautioned that they are unable to predict with absolute certainty when, or even if, that would occur.

"We don't know, and can't tell precisely, when the conduit will empty of magma below the water table," Swanson said. "Secondly, we're uncertain as to how long it will take for conditions to generate an explosion once the conduit has been emptied below the water table. We expect that it's quite a rapid process, but we really don't know for certain."

Local authorities said dozens of people evacuated from the southeast end of the island in and around Leilani Estates remained at shelters Wednesday.

Caption
A photo provided by the U.S. Geological Survey shows a volcanic fissure, called fissure seven, in Leilani Estates, near Pahoa, Hawaii, May 5, 2018. More than two dozen homes have been destroyed since the Kilauea volcano began erupting last week, officials said on Sunday, as at least 10 fissures emerged, spewing lava into residential neighborhoods on the eastern edge of the island of Hawaii. (U.S. Geological Survey via The New York Times)
Wait 1 second to continue.

Talmadge Magno, the civil defense administrator for Hawaii County, said authorities also has asked a geothermic plant located half a mile from a Leilani Estates fissure to remove 12,000 gallons of a highly flammable chemical fuel from the area.

The chemical, pentane, is prone to explosions, and spills can cause serious health problems including respiratory distress and vomiting, according to the Centers for Disease Control. Magno said the 12,000 gallons would be moved Wednesday to an industrial park at a safe distance from the fissures, and that the county is "planning to remove the rest."

"We're concerned about the safety," Magno told reporters on the call. "We don't want to risk any explosion in the area, so we requested that they get that fuel out of there."

Local residents have long voiced concern about the Puna Geothermal Venture, which state senator Russell Ruderman said was constructed more than 25 years ago in a recognized high-risk zone for lava flow, and despite the objections of local residents. He said the decision was due to "stupid, idiotic planning and the tendency to ignore real dangers when there's a buck to be made."

Puna Geothermal Venture could not be reached for comment Wednesday.