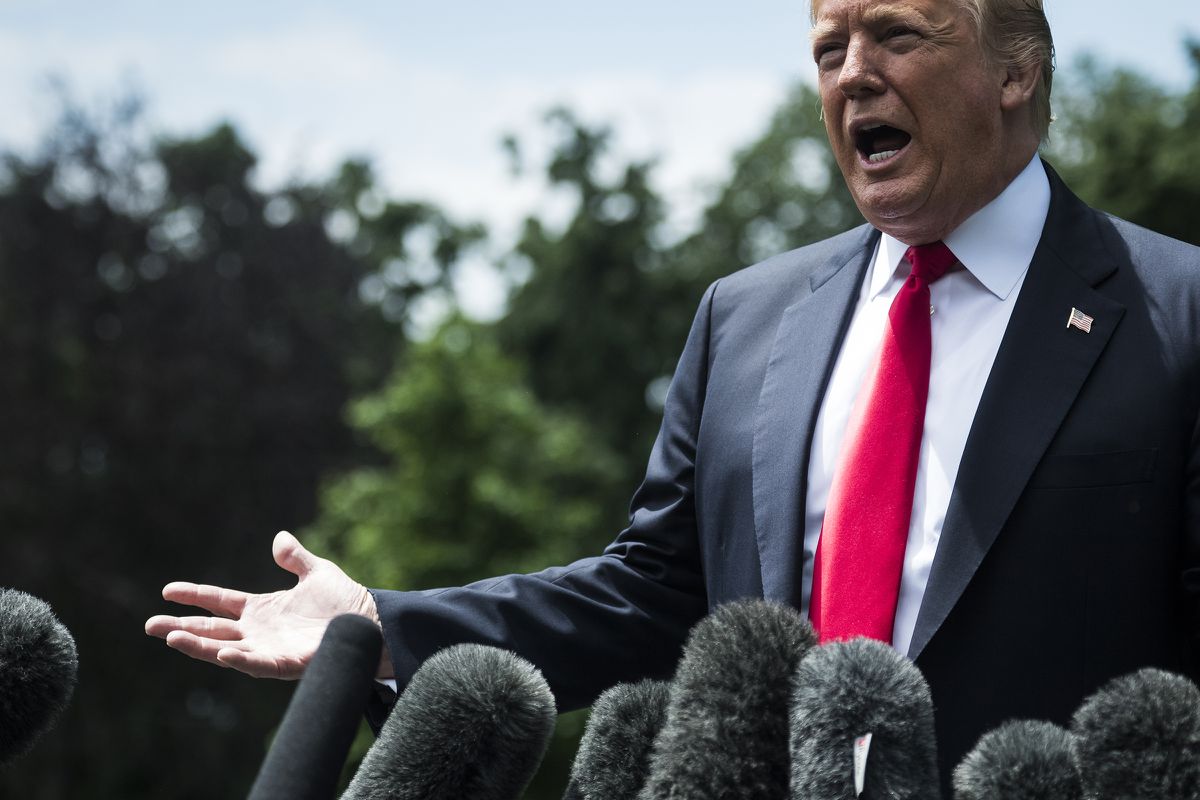 President Trump, in his second year in office, has hired more advisers who are personally in sync with him. Washington Post photo by Jabin Botsford

President Trump, in his second year in office, has hired more advisers who are personally in sync with him. Washington Post photo by Jabin Botsford

WASHINGTON - The White House communications director’s job has been vacant for exactly two months. But in practice, it has been filled since the day Hope Hicks said farewell to her unofficial replacement - President Donald Trump himself.

The president also has unofficially performed the roles of many other senior staffers in recent months, leaving the people holding those jobs to execute on his instincts and ideas.

And that’s exactly how Trump likes his West Wing.

Largely gone are the warring factions that dominated life at 1600 Pennsylvania Avenue in the first year of Trump’s term, replaced by solo players - many with personal connections to the president and their own miniature fiefdoms - laboring to do their jobs and survive.

Trump has brought in a handful of senior people who believe in him personally, are temperamentally in sync with the brash boss and are invested in his political success more than some of his first-year aides were. As one top official put it, “Ultimately he’s the only one anyone elected.”

But the staff changes have not led to immediate victories on some of Trump’s top priorities. Trade talks with China have proved more complicated than Trump expected, marred in part by staff disagreements. And the president last week abruptly nixed a planned nuclear disarmament summit with North Korean leader Kim Jong Un after the rogue state’s regime lashed out over comments by national security adviser John Bolton and Vice President Mike Pence. Yet Trump is still hopeful that the summit could take place, and White House officials maintain that a trade deal with China can be achieved.

Rather than struggling to manipulate the president to follow their personal agendas, the senior staff members of Trump’s Year 2 - or “Season 3,” in Trump’s reality television parlance - focus on trying to curb his most outlandish impulses while generally executing his vision and managing whatever fallout may follow. Most of all, officials said, they “get” Trump.

“Last year was the year of adjustment. He was constrained by an axis of adults and adjusting to be president,” said Thomas Wright, a senior fellow at the Brookings Institution. “This year is the year of action. He’s giving the orders, even if there’s resistance.

“Next year,” he continued, “is the hangover year, the year of living with the consequences.”

The new cast of advisers - including national security adviser John Bolton, economic adviser Larry Kudlow and personal attorney Rudy Giuliani - have generally melded more easily with Trump than their predecessors did. They are generational peers of the 71-year-old president, earned Trump’s appreciation for their vigorous defenses of him on television over the years and treat him like the boss, even if they do not always agree on specific policies.

Christopher Ruddy, a Trump friend and chairman of Newsmax, explained the dynamic: “A lot of it is just personal chemistry, getting to know him, and understanding his perspective on things and how he approaches things.”

Trump recently has been hunting for aides who have shared damaging information with journalists without authorization, demanding that “leakers” be caught and punished. He has been spurred on by a string of national-security-related disclosures, as well as recent reports on communications aide Kelly Sadler’s crude comment about Sen. John McCain’s brain cancer in an internal meeting.

“Leakers are traitors and cowards, and we will find out who they are!” Trump tweeted two weeks ago.

Privately, the president has confronted aides about leaks, questioned who the culprits may be and mused that maybe “someone should be made an example of,” according to an administration official.

It is unclear how exactly the White House plans to ferret out and fire people it suspects of leaking. Still, Trump’s personal interest in the matter has heightened the anxiety and fear of a shake-up inside the building.

When Bolton joined the administration in April as the third national security adviser in 15 months, Trump gave him a simple, if stern, directive: “Stop the leaks and fire the leakers,” according to a person with knowledge of the conversation.

Bolton began by dismissing a number of National Security Council employees, saying the president expected their removal - even though Trump was not personally displeased with those employees, according to current and former White House aides.

Bolton, a driving force behind Trump’s North Korea strategy, has downsized large group meetings on sensitive national security issues, in part to cut down on leaks. He did not, for instance, convene a National Security Council Principals Committee meeting before Trump’s decision to withdraw from the Iran nuclear deal. But Bolton did hold multiple other meetings on the Iran agreement and orchestrated an interagency process, a senior administration official said. He also holds regular Wednesday meetings of the security council’s senior directors, the official said.

Though Bolton’s initial string of firings rankled some in the White House - and he entered with suspicion because of his reputation in the George W. Bush administration as a bureaucratic infighter - others in Trump’s orbit say Bolton, 69, has largely been a team player. They said he has been savvy in aligning himself with some of the administration’s rising stars, as well as staying in regular touch with the president.

“There’s only one bull in this china shop, and I think he gets that,” said one Republican strategist in frequent touch with the White House.

Trump has an easy rapport with Kudlow, 70, other advisers said, in part because of their long history together in New York.

Kudlow, who replaced Gary Cohn as director of the National Economic Council, has tried to temper some of Trump’s nationalistic impulses on trade - arguing against tariffs in meetings, for instance, according to administration officials. But on other issues he is very much in sync with Trump, they said.

“Kudlow is much more within his philosophical sphere,” Giuliani said, adding that though the two men have “some disagreements on trade,” they can almost always “meet in the middle.”

Known for his pinstripe suits, Kudlow cuts an affable swath through the West Wing and has taken to giving sartorial tips to male colleagues - specifically arguing against brown shoes with blue suits.

“The president was going to replace weaker people with stronger people,” Ruddy said. “He brought on people, saw what worked, and those that worked, like [Secretary of State] Mike Pompeo, got promoted, and those . . . who were considered weak aren’t there anymore.”

The result: a White House solar system in which the president functions as the sun and his aides and advisers circle around him, but with no clear lines of orbit. Giuliani, for instance, weighed in during a recent interview with The Washington Post on a topic totally outside his Russia-investigation purview: Iran.

“The president down the road is thinking regime change in Iran,” Guiliani said. “There is no doubt that at some point, we have to make that change. What side of history do you want to be on?”

At least two people in Trump’s circle - one current White House official and one former - likened the dynamic in the West Wing to HBO’s “Game of Thrones.” They chose the show, they said, not because of the internecine conflicts and deadly family feuds, but because of the general sense of confusion and seesawing fortunes.

“I would liken it to ‘Game of Thrones’ a little bit, not for the obvious reason, but from a factual standpoint,” said the current official. “No one knows where anyone else is, and everyone is playing everyone else a little bit. Everyone is essentially in business for themselves.”

White House Chief of Staff John Kelly has receded somewhat from public view, especially compared with the early months of his tenure, when the retired four-star Marine general attempted to impose military rigor and discipline on a chaotic operation. A senior White House official said Trump has not lost confidence in Kelly but rather is welcoming more voices in internal discussions.

“The president sets the tone for the message,” a senior White House official said. “Trying to use a cookie-cutter personnel structure, whether it’s communications or anything else, in a very unconventional White House is not necessarily going to work.”

Initially, after Hicks’s March 29 departure, an internal struggle to succeed her broke out between Mercedes Schlapp, the director of strategic communications, and Tony Sayegh, the top Treasury Department communicator. Both had their proponents, but the “nuclear fallout” over the quest to replace Hicks, as one official termed it, left many in the West Wing feeling bruised.

Though Trump continues to rage about Special Counsel Robert Mueller’s investigation into Russian interference in the 2016 presidential election, the president seems satisfied - for now, at least - with his new legal team, which includes Giuliani and Emmet Flood, the official White House lawyer tasked with handling the probe.

Whereas Trump used to leave meetings with his previous legal team red-faced and riled up, said someone familiar with the dynamic, the president these days appears more sanguine after briefings from his lawyers. In many ways, Giuliani, who is prosecuting the case against Mueller in the court of public opinion, has served as a helpful release valve for Trump, this person added.

Throughout the early months of Kelly’s reign, former Trump campaign manager Corey Lewandowski was persona non grata and barred from the White House. Still, Trump kept in touch with Lewandowski by phone and talked to others about bringing him onto the White House staff.

So it was that Lewandowski got hired as an adviser to Pence’s political action committee in April, a move that was announced earlier this month. Then last week, Lewandowski - as well as former deputy campaign manager David Bossie - was back on the White House grounds, standing just outside the entrance of the West Wing for a live interview on Fox News Channel.

It was unclear if Trump was watching, but it was certain that Lewandowski was back in the inner sanctum.