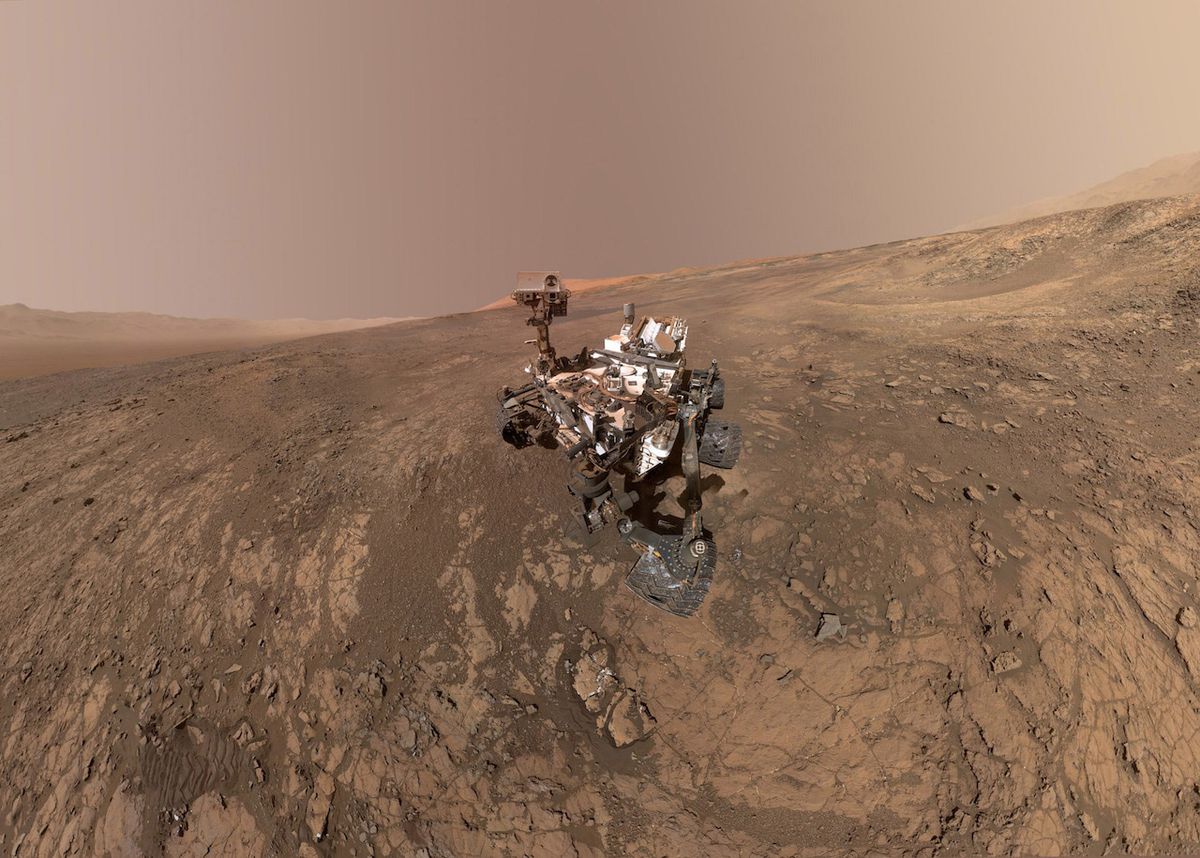 In puffs of gas from rocks more than 3 billion years old dug up by one of NASA's robotic explorers on Mars, scientists have identified several complex organic molecules — possible building blocks for ancient life.

It's not aliens. (It's never aliens.)

But it is "consistent with the past presence of biology," said Ken Williford, an astrobiologist at NASA's Jet Propulsion Laboratory. "And it makes us more confident that if biomarkers" – or direct evidence of biologic activity – "are there, we might find them."

In two studies published Thursday in the journal Science, this new finding from NASA's Curiosity rover is paired with another discovery: The planet's methane – another organic molecule usually (but not always) produced by living beings – varies with the seasons. In the past, scientists have seen plumes and patches of this intriguing substance, but this is the first time they've been able to discern a pattern in its presence. The result could pave the way for future missions to pin down the methane's source.

"The closer we look, the more we see that Mars is a complex, dynamic planet that – particularly early in its history – was more conducive to life than we might have previously imagined," said Williford, who was not involved in either study.

A reminder: Organic molecules aren't necessarily produced by organisms; they're just chemical compounds that contain carbon. But they're of interest to astrobiologists because they are the essential ingredients in all the chemistry that drives life on Earth.

Mars's Gale Crater, where Curiosity has been trolling around for the past six years, is a particularly interesting place to look for those molecules. About 3.5 billion years ago, research suggests, this pockmark on the Martian surface was brimming with water.

But the water vanished when most of the Martian atmosphere was stripped away by brutal solar winds. And, given the intensity of the radiation bombarding the planet's surface, it wasn't clear whether any relics from that warm, wet period could still be preserved in mudstones on the lake's dried-up floor.

Using Curiosity's Sample Analysis at Mars instrument – which heats soil and rock samples to examine their contents – astrobiologist Jennifer Eigenbrode and her colleagues were able to identify an array of interesting organic molecules: Ring structures known as aromatics, sulfur compounds and long carbon chains. Even more compelling was the fact that these compounds seemed to have broken off even bigger, more complex "macromolecules" – substances found on Earth in coal, black shale and other ancient organic remains.

"What we have detected is what we would expect from a sample from an ancient lake environment on Earth," said Eigenbrode, of NASA's Goddard Space Flight Center.

There are some non-biological explanations for the detection — this combination of compounds has also been found in meteorites. But that explanation, too, suggests a provocative possibility; even if the organic molecules didn't come from life, they are exactly what life likes to eat. Perhaps the meteorite-delivered molecules provided fuel for ancient alien organisms.

Regardless, the detection is a technical achievement, said Williford, because it demonstrates that organic molecules can persist near Mars's surface for billions of years. If scientists keep drilling deeper and more widely, as they plan to do with the European and Russian space agencies' ExoMars rover and NASA's Mars 2020 mission, who knows what they might find? (Williford is deputy project scientist for Mars 2020.)

The methane study, spearheaded by JPL atmospheric scientist Chris Webster, is also intriguing for astrobiologists. On Earth, 1,800 out of every billion molecules in the atmosphere is methane, and 95 percent of it comes for biological sources: Burning fossil fuels, decomposing debris, burping cows. Some of our planet's earliest organisms may have been methanogens – microbes that eat organic molecules and exhale methane gas.

Several spacecraft including Curiosity have detected whiffs of this gas that "defied explanation," Webster said. Methane is quickly broken down by radiation, so it must be replenished by some source on the planet. One explanation "that no one talks about but is in the back of everyone's mind," as Goddard planetary scientist Mike Mummaput it to Science last winter, is that methanogens beneath the Martian surface were breathing it out.

"You'd expect life to be seasonal," Mumma noted. But it was also possible that puffs of methane were delivered to the desert world by crashing meteorites or other less thrilling sources.

By examining data spanning nearly three Martian years (six Earth years), Webster and his colleagues discerned the first repeating pattern in Martian methane. During the summer months, levels of the gas detected by Curiosity rose to about 0.7 parts per billion; in winter, they fell to roughly half that. They suggest that warmer conditions might release the gas from reservoirs beneath the surface.

The results don't explain shorter-lived spikes in methane levels – as high as 45 parts per billion – that have been detected. And even if the reservoir explanation is correct, it remains to be seen what's feeding them.

To determine whether the methane is biological, Webster said, scientists can weigh the kinds of carbon atoms it contains (life prefers the lighter versions). Future missions might also seek places where there's "significant seepage" and attempt to figure out its source.

In a commentary for Science, astrobiologist Inge Loes ten Kate of the Utrecht University in the Netherlands, explained what makes these two studies so compelling:

"Curiosity has shown that Gale crater was habitable around 3.5 billion years ago, with conditions comparable to those on the early Earth, where life evolved around that time," she wrote. "The question of whether life might have originated or existed on Mars is a lot more opportune now that we know that organic molecules were present on its surface at that time."