Defense secretary stops in Alaska on his way to Asia 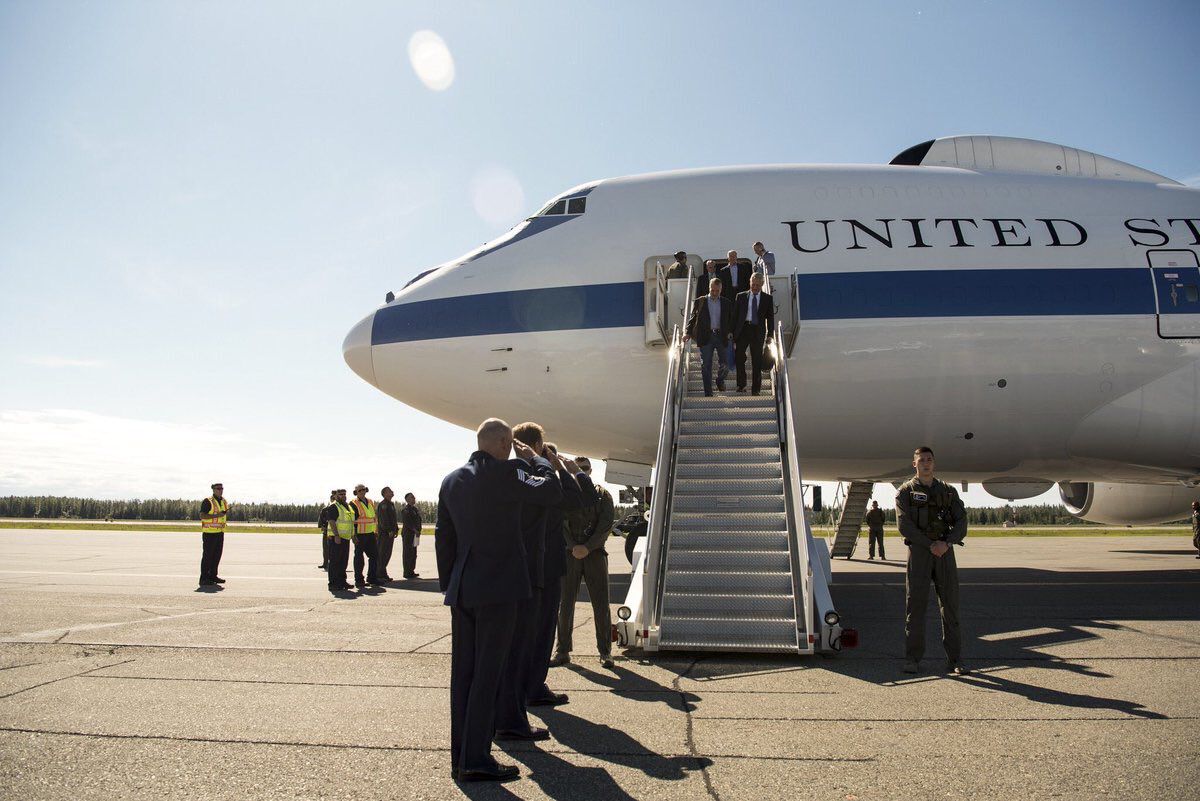 EIELSON AIR FORCE BASE, Alaska — Defense Secretary Jim Mattis laid out plans for a less contentious, more open dialogue with Chinese leaders as he travels to Asia, less than a month after he slammed Beijing at an international conference for its militarization of islands in the South China Sea.

Speaking to reporters on his plane Sunday en route to a stop in Alaska, Mattis avoided any of the sharp criticism of China that he had voiced recently. Instead, he insisted that he is going into the talks with Chinese leaders without any preconceived notions, and wants to focus on larger, more strategic security issues.

According to officials, a key topic of the discussions later this week will be the denuclearization of the Korean peninsula and the role China can play, considering its longstanding friendship with North Korea.

"I want to go in right now without basically poisoning the well at this point. I'm going there to have a conversation," said Mattis. "I do not want to immediately go in with a certain preset expectation of what they are going to say. I want to go in and do a lot of listening."

During his stop in Alaska, Mattis will visit a key element of the America's missile defense system at Fort Greely, the strategic missile interceptors. Sen. Dan Sullivan, R-Alaska, flew with Mattis from Washington and is expected to go to Fort Greely with him.

The Pentagon budget calls for increasing the number of interceptors from 44 to 64, and that additional 20 will be located at Fort Greely. Critics question the reliability of the interceptors, arguing that years of testing has yet to prove them to be sufficiently effective against a sophisticated threat.

Mattis' more diplomatic tack reflects the U.S. administration's recognition of China's crucial influence on Korea as negotiations move ahead to get North Korea to abandon its nuclear program.

One senior U.S. official said that while Mattis will willingly lay out America's position on China's military buildup in the South China Sea and other points of contention, the Pentagon chief doesn't want to open the conversations with "the irritants." Instead, the goal is to have higher quality talks about the two countries' military relationship, said the official, who spoke on condition of anonymity to discuss internal deliberations on the trip.

Last month, however, Mattis abruptly disinvited China from a multinational exercise in the Pacific that will begin in a few days, in retribution for Beijing putting weapons systems on manmade islands in the South China Sea. And days later he publicly threatened "much larger consequences in the future" if the militarization continued.

China recently has deployed anti-ship missiles, surface-to-air missiles, electronic jammers and other equipment on the Spratly Islands, and landed a bomber aircraft at Woody Island. China says it is within its rights to build up defenses on islands in the South China Sea that it believes are its sovereign territory.

Many nations fear that Beijing will use the construction on the islands to extend its military reach and potentially try to restrict navigation in the South China Sea.

It's all but certain the Chinese will raise those issues with Mattis, as well as Beijing's long-held opposition to increasing U.S. contacts with Taiwan. China claims the self-ruled island as its territory.

For the U.S., however, North Korea will be a primary topic in the talks with senior Chinese leaders. And while the U.S. would like to see China use its influence to reinfore the denuclearization negotiations with North Korea, it also wants Beijing to remain committed to enforcing sanctions against the North, as part of the pressure campaign.

China also is likely pleased that the U.S. has suspended any major military exercises with South Korea as part of the nuclear negotiations.

Mattis said Sunday that the Pentagon cancelled two Marine military exchanges as well as the larger Ulchi Freedom Guardian exercise this fall, because the defense department considered them consistent with what President Donald Trump and North Korean leader Kim Jong Un had agreed on at the summit about two weeks ago.

The U.S. has also long been frustrated that China doesn't share much information about any war scenarios or other contingencies it has in place in the event of a conflict on the Korean peninsula or the collapse of the North Korean government.

By improving its relationship with Beijing, Washington believes it could better prepare for any problems and be able to coordinate more effectively with China.

This is Mattis' first trip to China, both personally and as defense secretary. He said he has been in Hong Kong several times. The last Pentagon chief to visit China was Chuck Hagel in April 2014.

But both Mattis and his immediate predecessor, Ash Carter, have spent a great deal of time in Asia, in the wake of the much-vaunted U.S. increased emphasis on the Indo-Pacific region. Mattis has traveled to Asia seven times during his 17-month tenure as defense secretary, and this marks his third visit so far this year.

In addition, Mattis will travel to South Korea and Japan to meet with his defense counterparts as well as other national leaders.