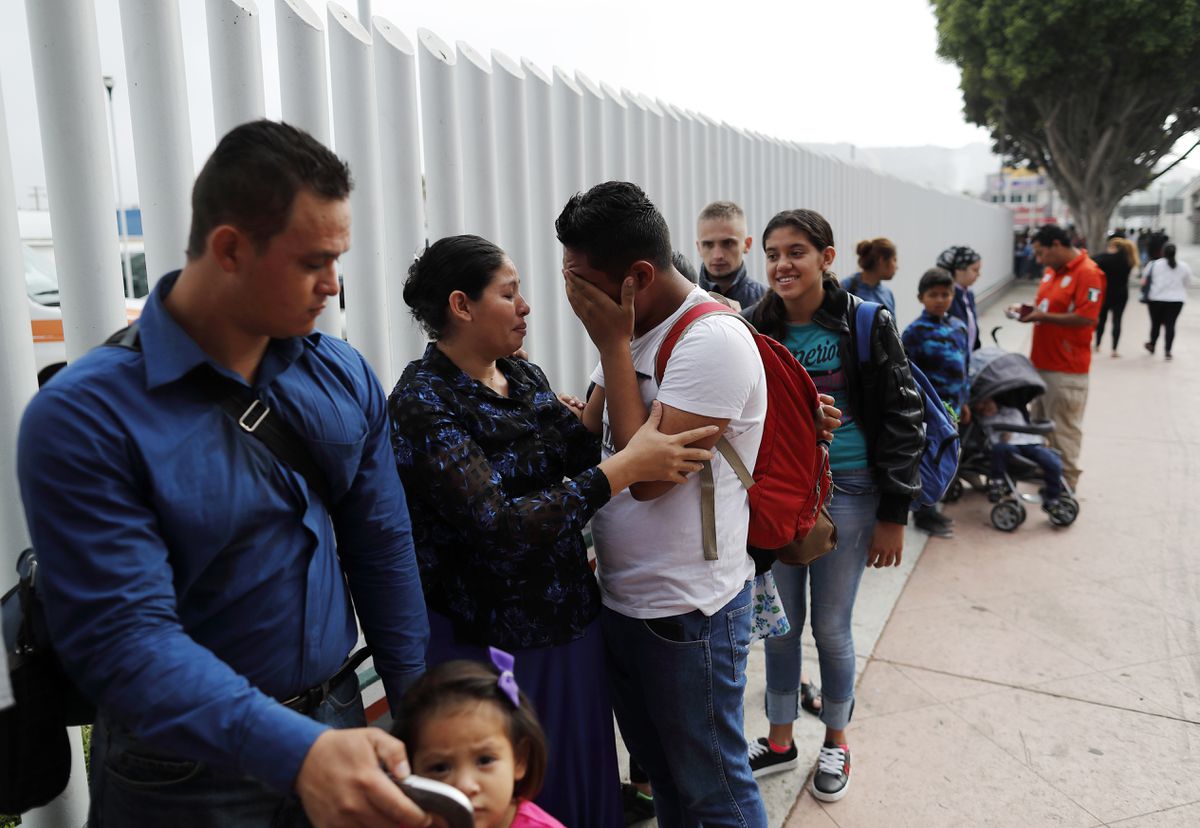 Calet Garcia, center, of Honduras, cries once he realizes he will be able to apply for asylum in the U.S. with his friend Daisy Avelar, second from left, of El Salvador, Thursday, July 26, 2018, near the San Ysidro port of entry in Tijuana, Mexico. As the Trump administration faced a court-imposed deadline Thursday to reunite thousands of children and parents who were forcibly separated at the U.S.-Mexico border, asylum seekers continue to arrive to cities like Tijuana, hoping to plead their cases with U.S. authorities. (AP Photo/Gregory Bull)

Calet Garcia, center, of Honduras, cries once he realizes he will be able to apply for asylum in the U.S. with his friend Daisy Avelar, second from left, of El Salvador, Thursday, July 26, 2018, near the San Ysidro port of entry in Tijuana, Mexico. As the Trump administration faced a court-imposed deadline Thursday to reunite thousands of children and parents who were forcibly separated at the U.S.-Mexico border, asylum seekers continue to arrive to cities like Tijuana, hoping to plead their cases with U.S. authorities. (AP Photo/Gregory Bull)

SAN DIEGO — The Trump administration said Thursday that more than 1,800 children separated at the U.S.-Mexico border have been reunited with parents and sponsors but hundreds remain apart, signaling a potentially long wait for anguished families.

The federal government was under a Thursday deadline to reunify more than 2,500 children who were separated at the border from their parents under a new immigration policy designed to deter immigrants from coming here illegally. The policy quickly backfired amid global outrage from political and religious leaders and daily headlines about crying children taken from their parents.

President Donald Trump ended the practice of taking children from parents, but a federal judge in San Diego ordered the government to reunite all the families by the end of day Thursday, but the efforts will continue. U.S. District Judge Dana Sabraw has indicated some leeway given the enormity of the job.

As of Thursday morning, the government said it reunited 1,442 children 5 and older with their parents in U.S. Immigration and Customs Enforcement custody. An additional 378 were reunited with parents in different locations around the country or given to sponsors, who are often relatives or close family members.

That leaves about 700 who remain apart, including more than 400 whose parents have been deported, officials say. Those reunions take more time, effort and paperwork as authorities fly children back to Guatemala, El Salvador and Honduras.

The Trump administration insisted it would meet the court deadline by reuniting all of the family members that it deemed eligible for reunification.

Chris Meekins, the head of the office of the assistant secretary for preparedness and response for Health and Human Services, said the government would continue to reunify families throughout the evening.

"We are on-track to reunite all eligible parents in ICE custody," Meekins said.

For the last two weeks, children have been arriving steadily at ICE locations in Texas, Arizona and New Mexico to get back with parents. Faith-based and other groups have provided meals, clothing, legal advice, plane and bus tickets and even new shoe laces, which are taken away from people in detention.

The families are generally released, and parents are typically given ankle-monitoring bracelets and court dates to appear before an immigration judge.

A charitable organization called FWD.US, founded by technology leaders including Microsoft founder Bill Gates, Facebook CEO Mark Zuckerberg and Dropbox founder Drew Houston was paying for the airline tickets, the bus tickets and the lodging for all the families newly reunited in the Phoenix area to get them to relatives living all over the United States, said Connie Phillips of Lutheran Social Services of the Southwest. She said a phone company had provided 500 mobile phones for the migrants, each with six months of free service.

There were scattered reunions in various locations on Thursday, including about 15 in Phoenix, said Phillips. The main immigrant-assistance center in El Paso, Texas, has been receiving about 25 reunified families a day.

Some children who had not seen their parents in weeks or months seemed stoic and slow to accept that they would not be abandoned again.

Lutheran Social Services support worker Julisa Zaragoza said some reunified children in Phoenix were so traumatized they were afraid to go to the bathroom by themselves, fearful their parents would be gone when they came out.

One father who was reunited last week said his young daughter did not believe that he would not leave her a second time.

Jose Dolores Munoz, 36, from El Salvador, was reunited with his 7-year-old daughter last Friday, nearly two months after they were separated. He said his daughter cries when he leaves the house because she thinks he's not coming back.

"She is afraid," Munoz said in Spanish. "Yesterday I left her crying, she is telling me, 'You are not coming back. You are lying. You are leaving me.'"

Lee Gelernt, an attorney for the American Civil Liberties Union who represents the separated families, said before the latest figures were announced that the government should not be congratulating itself for meeting its "self-defined" deadline.

"The government shouldn't be proud of the work they're doing on reunification," he said. "It should just be, 'We created this cruel, inhumane policy … now we're trying to fix it in every way we can and make these families whole."

Among those who remain apart from their children is Lourdes de Leon of Guatemala. She turned herself in to authorities at the border and was deported on June 7, but her 6-year-old son, Leo, remained in the U.S.

De Leon said Guatemalan consular officials told her signing a deportation order would be the easiest way to reunite with Leo.

"He is in a shelter in New York," de Leon said. "My baby already had his hearing with a judge who signed his deportation eight days ago. But I still do not know when they are going to return him to me."

"I think it's going to be really hard detective work," he said. "And hopefully we're going to find them."

Both sides were due back in court Friday, when the judge was going to decide whether to ban deportations of families for seven days after they are reunified so that parents could have time to discuss their options.

Late last month, Sabraw ordered a nationwide halt to family separations, which President Donald Trump effectively did on his own June 20. Sabraw issued a 14- day deadline to reunite children under 5 with their parents and 30 days for children 5 and older.

Phillips said the parents and kids open up as they go through an assessment process with workers. She said the outpouring of donations has been comforting.

"We have seen a lot of people come together over this, we're seeing the best of what Americans can be," she said.