An orca calf died shortly after being born. Its grieving mother has carried her body for days. 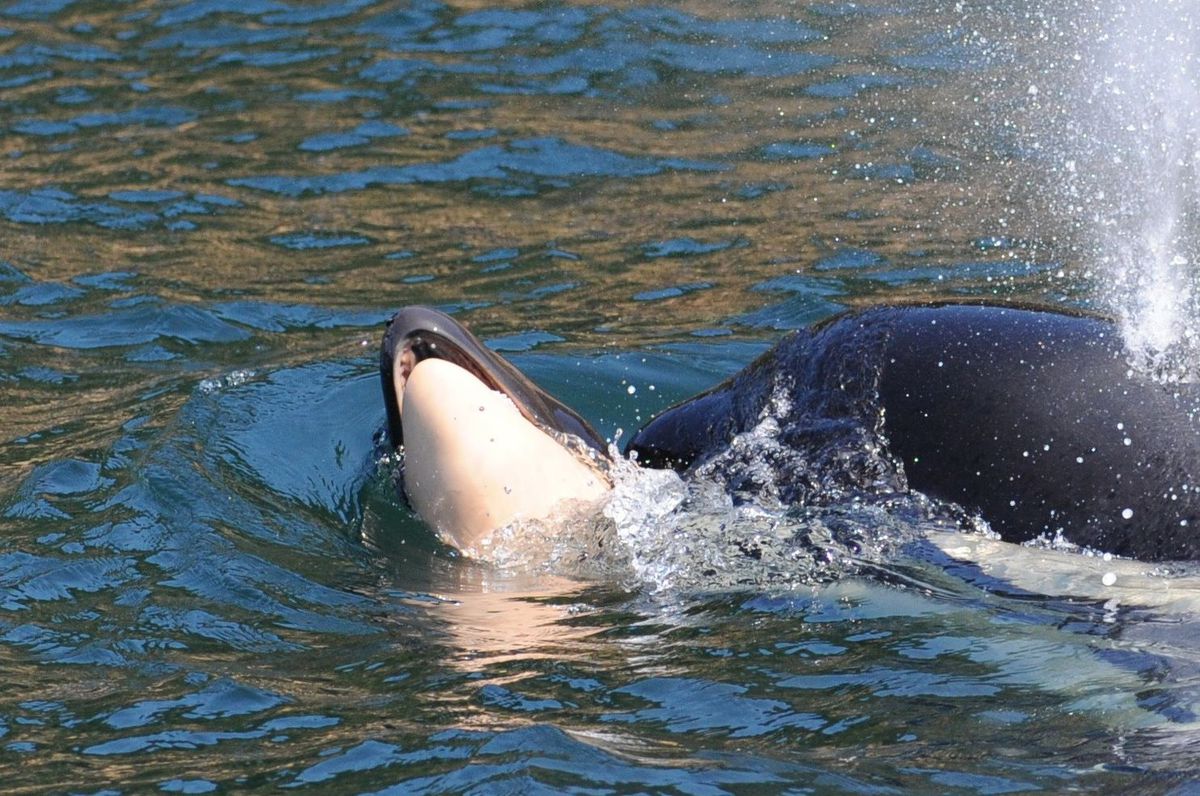 For roughly 17 months, she waited.

On Tuesday morning, it finally happened. J35, a member of a critically endangered population of southern resident killer whales, gave birth near Victoria, British Columbia. It was a baby girl. She was the first calf to be born alive in three years to the pod known to frequent the waters off the coast of Washington. In that moment, surrounded by family and swimming by her mother's side, everything was perfect.

Then, the calf stopped moving and J35 experienced a mother's worst horror. She watched her baby die - less than an hour after giving birth to her.

For hours, she grieved, carrying the dead calf on her head as she swam, Ken Balcomb, founder and principal scientist of the Center for Whale Research on San Juan Island, told The Washington Post. The hours turned into days, and on Thursday she was still seen pushing her baby to the water's surface.

"That's not unprecedented, but it's the longest one that I've personally witnessed," Balcomb said.

Over the past three days, J35 has continued to follow her pod, traveling up to Vancouver before returning to San Juan Island Thursday afternoon, Balcomb said. Each day, she averaged anywhere between 60 to 70 miles, all while working to keep a her baby's 400 pound body afloat.

What J35 is doing is not easy, Deborah Giles, a killer whale biologist with the University of Washington Center for Conservation Biology, told The Washington Post.

"If you're a whale or a dolphin, it means that you have to go down and pick that animal up as it's sinking, bring it to the surface, hold your breath for as long as you can and then basically dump your baby off your head in order just to take a breath," said Giles, who observed J35 from a research boat Thursday.

J35 managed to do this repeatedly, all while fighting a strong current, Giles said. She added that it was likely the mother orca had also not eaten in days.

Her dedication is a testament to the strong bonds social animals, such as orcas, form with their offspring.

"It's real and it's raw," Giles said. "It's obvious what's happening. You cannot interpret it any other way. This is an animal that is grieving for its dead baby and she doesn't want to let it go. She's not ready."

This reaction is not dissimilar to the way people feel when they lose a child, Giles said.

"That's part of what people are picking up on, like 'my God I would feel the same way,'" she said. "'If I had a baby that only took a couple breaths, I wouldn't want to let it go either.'"

This type of grieving behavior is not unique to killer whales and has been exhibited by a variety of marine mammals, including Indo-Pacific bottlenose dolphins and sperm whales, according to a 2016 study published in the Journal of Mammology. On land, chimpanzees are also known to carry around their babies corpses.

While the orca calf's death is a tragedy for her mother, it's also left researchers "devastated," Balcomb said.

The southern resident killer whale population is facing an "imminent threat of extinction," according to a statement from the Center for Whale Research, which has studied the population for more than 40 years. Currently, the clan only has 76 whales, down from 98 in 1995, and many of its females will soon be too old to reproduce, Balcomb said. Orcas have a gestation period of 15 to 18 months, which means mothers can only give birth every three to five years.

"This may be the last generation that we get to see of the whales," Balcomb said. "Their reproductive life is about 25 years. We've wasted 20 of those years just having meetings and conference calls and writing reports and wringing our hands."

Reproduction rates for the population have been dismal. Over the past two decades, about 75 percent of newborns have not survived, researchers say. Since 2015, no pregnancies have produced viable offspring.

A new baby, especially a female capable of reproduction, was exactly what the dwindling whale population needed.

"To lose a calf now, to lose another potential female that could add to the population is devastating," Giles said. "This is exactly the opposite of what we need to be happening."

The whales face three major threats to survival: toxins, ship traffic and a lack of food, specifically Chinook salmon, according to the Center for Whale Research.

There is evidence that the shortage of food has impacted the clan's reproductive success, Balcomb said. Researchers have not yet determined what caused J35's baby to die, but Balcomb believes "malnutrition of the mother is most likely."

In March, Washington Gov. Jay Inslee, D, signed an executive order to protect orcas and Chinook salmon, both of which are the state's "signature species."

The southern resident killer whales were given their name because they would be seen in the area "virtually every day," as opposed to more transient pods, Balcomb said. In 2006, more than 500,000 people went on whale watching ships, according to 2014 NOAA technical memorandum on the whale watching industry in the Puget Sound. Annually, nearly 200,000 people visit the Lime Kiln State Park on San Juan Island to view the whales from land, the memo said.

While thousands still flock to see the whales, sightings aren't always guaranteed. May was the first month no southern resident killer whales were documented in inland waters, Giles said.

The image of J35 carrying the body of her calf is a "reality check" for those involved in the effort to save the orca population, she said.

“Heartbreaking is the only thing you can think,” she said. “It actually breaks your heart. It’s a true thing when they say that your heart hurts. My heart hurt.”