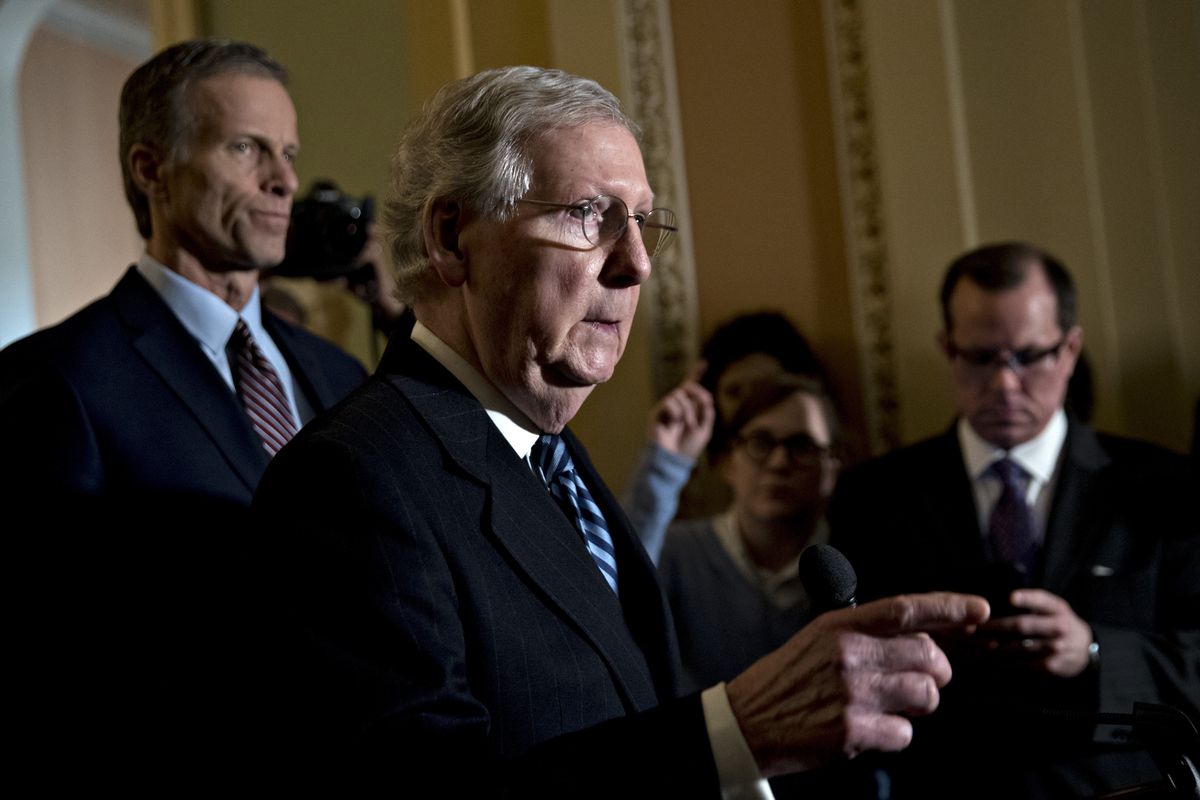 Senate Majority Leader Mitch McConnell, a Republican from Kentucky, speaks during a news conference after a weekly caucus meeting at the U.S. Capitol Washington, D.C., on Jan. 30, 2018. (Bloomberg photo by Andrew Harrer)

Senate Majority Leader Mitch McConnell, a Republican from Kentucky, speaks during a news conference after a weekly caucus meeting at the U.S. Capitol Washington, D.C., on Jan. 30, 2018. (Bloomberg photo by Andrew Harrer)

WASHINGTON - Democratic Sen. Patty Murray knew exactly what she would miss the most because of the Republican leadership’s decision to eliminate much of the previously sacrosanct tradition of August recess.

"The ability to decompress and remember why I like this job," Murray, Wash., said.

Sen. Lisa Murkowski, R-Alaska, will not be able to visit far-flung corners of her vast state, places that require a couple of days to travel and warm weather. "This is the only time I am able to get out and visit some of my constituents," she said.

For the first time in decades, senators are scheduled to spend most of August in session working on confirming President Donald Trump's nominees and passing the annual spending bills to keep federal agencies running.

Majority leaders have been issuing threats to postpone the August recess for 20 or so years, but eventually cooler heads have prevailed, and senators joined their House colleagues in a long break from Capitol Hill. The recess allows them to visit voters back home, travel abroad on fact-finding missions and, yes, have some down time with their families so they can recharge for the long slog of the fall legislative session.

But Majority Leader Mitch McConnell, R-Ky., after a brief delay of last year's summer recess, decreed that there was too much work to be done and scrapped plans for what would have been 32 days away from the Capitol.

While the House broke July 26 for a full five-week break, returning after Labor Day, senators left town Wednesday for just two weeks - a "skinny recess," if you will.

They will go back and forth the rest of August, working a few days here and then be given weekends to go home to their states.

The decision came under taunting Twitter pressure from Trump and from GOP senators who tend to follow the president's lead.

Veteran senators on both sides of the aisle are angry about the decision because it feeds the idea that they just want a long vacation and that Congress is a lazy institution that just needs to work harder.

For western state senators, such as Murkowski and Murray, it's a major disruption to their routine and affects their interactions with constituents. This will make them, they say, worse off as senators, less understanding of their constituents' needs.

Last weekend Murkowski trekked home to officiate a wedding, a trip that took half a day to get to Anchorage to spend a day on the ground, and then devoted another half day for the return trip to Washington.

Such quick trips do not leave any time to visit other parts of her state, especially those in regions that officials can reach only by long flights on bush planes.

Murray's point about using August to "decompress" goes to the larger state of the House and Senate.

Most lawmakers agree that the problems of this Congress will not be solved by more days in session and more time together. Instead, they say the institution needs to foster better relations so the two sides work better together - which would, most likely, lead to less time in the Capitol and a more productive body.

Over the past 25 years, longtime senators and staff agree that the most consistently productive era was during the leadership of Trent Lott, R-Miss., and Thomas A. Daschle, D-S.D.

That duo handled immense issues: a presidential impeachment trial, an overhaul of welfare laws, a massive tax cut and rewrite of K-12 education laws, as well as the start of the wars in Afghanistan and Iraq.

In their seven years running the Senate together, the chamber finished its business before Thanksgiving five times.

Now, under McConnell and his predecessor, Democrat Harry M. Reid, Nev., the Senate does not finish its business until within days of Christmas, and far less gets accomplished.

Last year Sen. Richard C. Shelby, R-Ala., used the August recess for a long vacation in Scotland with his wife. Now that he is chairing the Appropriations Committee, Shelby said he stands ready to plow through the month if it helps pass legislation.

"The average American has a lot less time off than we do, so working in August, and then having a week off, and then working - that's not hard. It's something we ought to do," he said.

He hopes to shepherd through a massive spending bill funding the Pentagon and the Department of Health and Human Services, accounting for about 70 percent of agency spending each year. In addition, McConnell has lined up votes on circuit court judicial nominees.

Some senators view this as more of a political weapon that, once triggered, means the traditional recess is gone forever. "I don't think we'll ever get it back," Sen. Claire McCaskill, D-Mo., said, guessing that this "skinny recess" is the "new normal."

She's one of 10 Democrats running for reelection in states that Trump won in 2016, and they believe McConnell just wants to prevent them from getting "time on the ground" to help their campaigns, McCaskill said.

Tension like that makes it likely this late-summer work session only adds to the partisan enmity that has gripped Congress for the past decade or more.

Who will pay the highest price? The thousands upon thousands of Senate staff who work long hours for not great pay, particularly the nonpartisan support staff and Capitol Police who are stationed around the Senate chamber.

Those folks have devoted long days and nights to the Senate, always counting on a late-summer reprieve to take care of their personal lives. "People plan their weddings around August, because it's the one time that they can leave," Murkowski said.

Murkowski jokes that she is a founding member of the "coalition of the cranky." She is planning her own act of rebellion later this month.

Her mother-in-law turns 90, and there's a party in Alaska.