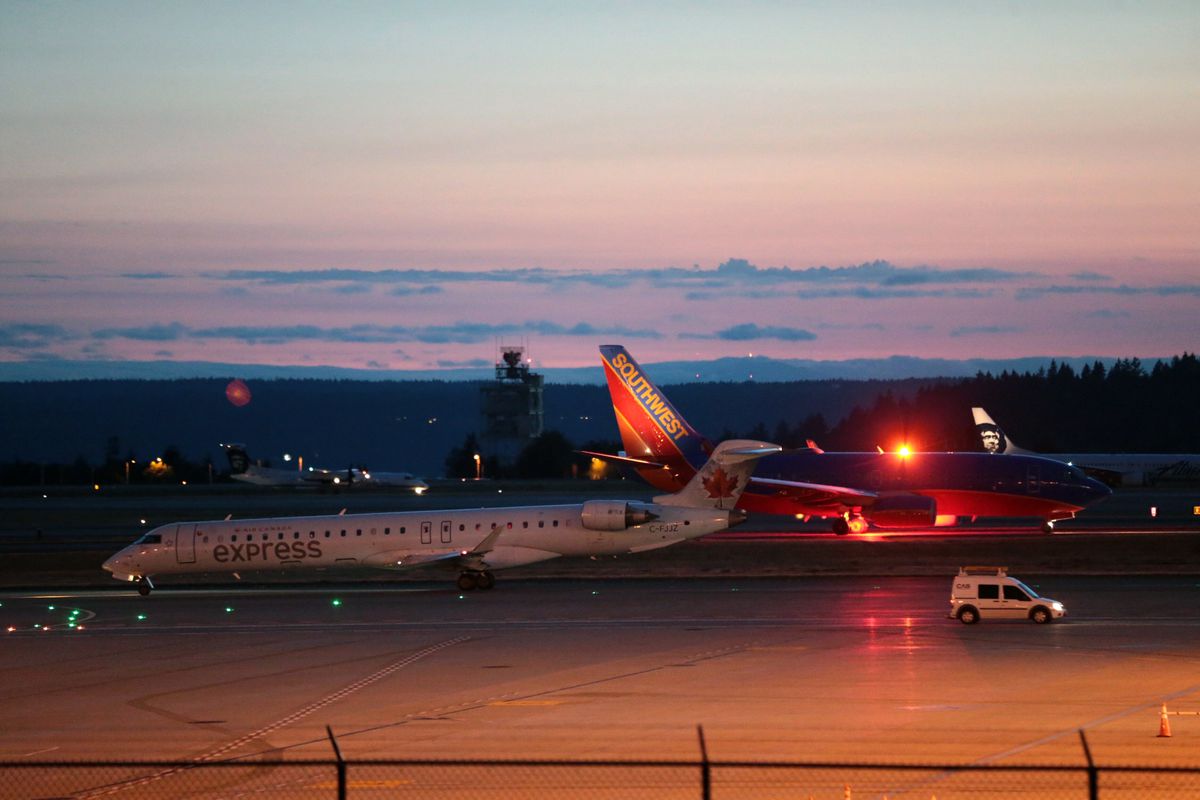 Planes sit on the tarmac at Sea-Tac International Airport after service was halted after an Alaska Airlines plane was stolen Friday, Aug. 10, 2018, in Wash. (Bettina Hansen /The Seattle Times via AP)

Planes sit on the tarmac at Sea-Tac International Airport after service was halted after an Alaska Airlines plane was stolen Friday, Aug. 10, 2018, in Wash. (Bettina Hansen /The Seattle Times via AP)

SEATTLE — Richard "Beebo" Russell was one of about 13,600 people with access to aircraft at Seattle-Tacoma International Airport, according to an airport spokesman, a number that highlights security challenges at one of the fastest-growing airports in the United States.

"All of those people have a job to do on those ramps," Sea-Tac spokesman Perry Cooper said. In Russell's case, "it wasn't a red flag to anybody to be out on the cargo area or around an aircraft, he had a job to do."

The airport has added temporary security measures after Russell, a ground-service agent, took off Friday in a Q400 turboprop plane and crashed it into a south Puget Sound island, officials said.

Port of Seattle Commissioner Courtney Gregoire said Monday at a news conference that the Port -- which operates the airport -- had not yet identified any lapses in security protocols after Russell, a Horizon Air employee, stole the plane.

"All security protocols were handled appropriately here at the airport," she said, later describing the heist as a one-in-a-million experience and an "aberration."

[Related: "We were all screaming, 'Oh my god'"?: How the Horizon Air theft and crash unfolded]

When asked if it scared her that the protocols were not able to prevent the incident, Gregoire said, "It's not fear; it's how do we get better?"

The port has beefed up security, Gregoire said.

Cooper said police and security personnel have been conducting more checks in the cargo area.

On Friday, Russell got into a pushback tractor, attached it to the empty aircraft and turned the airplane toward the runways, authorities said. He then taxied to runway 16C and took off at 7:32 p.m. He crashed about one hour and 10 minutes later in a wooded area of Ketron Island in south Puget Sound. Gregoire's news conference offered little new information about the investigation into how Russell managed to steal the plane.

"Just because you have a badge doesn't mean you can go everywhere," he said.

Cooper said the airport counts about 24,000 employees who have security badges in the busy summer season. Of those, 13,600 "would be badged for access to aircraft in various places."

Russell was one of about 11,400 people who possessed credentials to be within the "airport operations area," which contains the ramp area, gate area and several hangers, but not runways or taxiways.

Gregoire said the Port, airlines and other stakeholders already had begun to review security processes. She said she expected it would be part of a "national conversation" that involved a federal government review of regulations.

"The recent theft of a Horizon Air aircraft from Seattle-Tacoma International Airport exposed an issue with our nation's airport security protocols," Cantwell said in her letter to U.S. Senate Commerce Committee Chairman John Thune, R-South Dakota, and the committee's ranking member, Bill Nelson, D-Florida. "The fact that this incident occurred at Sea-Tac, which is one of the few large airports in the country to require full screening for all employees who work in the sterile area, shows that we need to continually adapt security measures to meet new threats."

The FBI said Sunday night that it had recovered the flight-data recorder and components of the cockpit voice recorder from the wreckage, as well as human remains. The Pierce County Medical Examiner confirmed Monday that the remains were Russell's.

Two trucks transported the plane's charred wreckage to the Tacoma Narrows Airport on Monday as National Transportation Safety Board (NTSB) investigators looked for a site to house and examine the debris.

"They checked with us, but it smelled so bad -- just all burned -- that we really couldn't find a home for it," said John Vodry, an owner of NW Hangars, LLC, which builds and leases private aircraft hangars at the Tacoma airport. NTSB investigators also inquired about a couple of other hangar locations at the airport, "but there's not that many options," Vodry said. "They're going to need a warehouse."

An FBI spokeswoman didn't respond to an email Monday about where investigators will store and examine the wreckage.