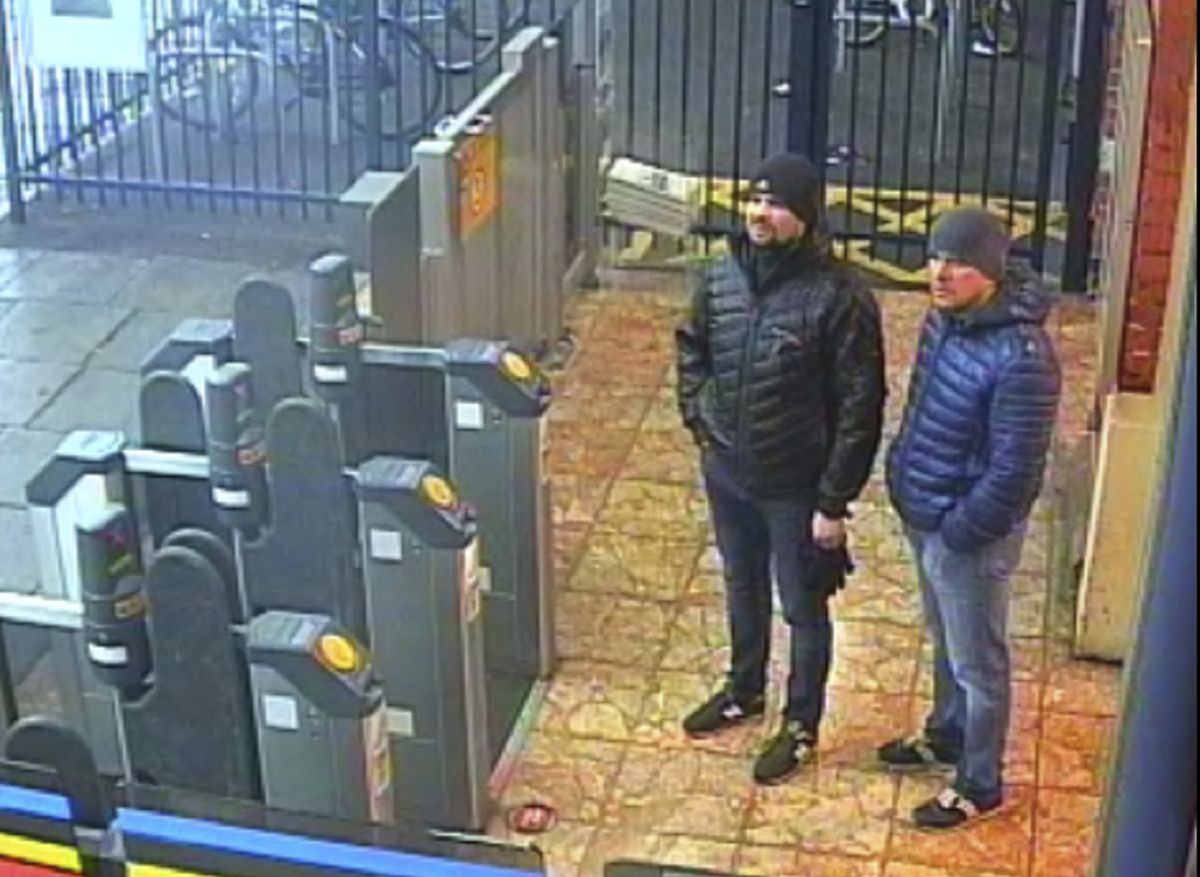 This still taken from CCTV and issued by the Metropolitan Police in London on Wednesday Sept. 5, 2018, shows Ruslan Boshirov and Alexander Petrov at Salisbury train station on March 3, 2018. British prosecutors have charged two Russian men, Alexander Petrov and Ruslan Boshirov, with the nerve agent poisoning of ex-spy Sergei Skripal and his daughter Yulia in the English city of Salisbury. They are charged in absentia with conspiracy to murder, attempted murder and use of the nerve agent Novichok. (Metropolitan Police via AP)

This still taken from CCTV and issued by the Metropolitan Police in London on Wednesday Sept. 5, 2018, shows Ruslan Boshirov and Alexander Petrov at Salisbury train station on March 3, 2018. British prosecutors have charged two Russian men, Alexander Petrov and Ruslan Boshirov, with the nerve agent poisoning of ex-spy Sergei Skripal and his daughter Yulia in the English city of Salisbury. They are charged in absentia with conspiracy to murder, attempted murder and use of the nerve agent Novichok. (Metropolitan Police via AP)

LONDON - British authorities on Wednesday named two Russian suspects wanted for a brazen nerve agent attack on a former Russian spy and his daughter in the English city of Salisbury.

May told Parliament on Wednesday: "Based on a body of intelligence, the government has concluded that the two individuals . . . are officers from the Russian military intelligence service, also known as the GRU."

"This was not a rogue operation," she said. "It was almost certainly also approved outside of the GRU at a senior level of the Russian state."

The two men, named as Alexander Petrov and Ruslan Boshirov, were charged with the attempted murder of Sergei Skripal and his adult daughter, Yulia Skripal. The elder Skripal served as a Russian military intelligence officer, who later switched sides and acted as a double-agent serving the British.

Police suspect that the Skripals were poisoned at the front door of their home in Salisbury, a quiet tourist town in the southern English countryside.

There has been intense international interest in the case - and universal condemnation that Russia would deploy a outlawed nerve agent.

The two Russians were also charged with the attempted murder of Nick Bailey, a British police officer who also fell ill from the nerve agent as he aided in the Skripal investigation in its earliest hours. All three have since recovered.

"Today marks the most significant moment so far in what has been one of the most complex and intensive investigations we have undertaken in counterterrorism policing," said Metropolitan Police Assistant Commissioner Neil Basu, Scotland Yard's counterterrorism chief.

Police released a series of photographs and video stills of the men as recorded on Britain's extensive closed-circuit television camera system. The two suspects probably traveled under aliases, police said.

Weeks after the Skripal attack, another couple were poisoned in a town just north of Salisbury. A British national named Charlie Rowley had found what appeared to be a bottle of perfume and gave it to his girlfriend, Dawn Sturgess. She later died in a hospital from exposure to the same nerve agent that afflicted the Skripals. Rowley was sickened but subsequently recovered.

Police released images of the perfume bottle, which turned out to contain Novichok, a military-grade nerve agent produced by the former Soviet Union.

The dispenser was a counterfeit Nina Ricci perfume bottle with a modified nozzle.

The police appealed to the public to come forward with any information about the suspects or the perfume bottle.

"We have now linked the attack on the Skripals and the events in Amesbury which affected Dawn Sturgess and Charlie Rowley," Basu, the counterterrorism chief, told a news conference. "It now forms one investigation. We do not believe Dawn and Charlie were deliberately targeted, but became victims as a result of the recklessness in which such a toxic nerve agent was disposed."

Police appealed for "worldwide" help in continuing the investigation. They released a detailed timeline of the movements of the two suspects and asked residents in Salisbury if they had seen the men.

Basu outlined the men's movements during their weekend in England. He said they arrived at London's Gatwick airport on Friday, March 2, and stayed at a hotel in east London, where traces of Novichok were later found.

On Saturday, March 3, they traveled to Salisbury for "reconnaissance," returning again the following day, Basu said. That was when "we believe they contaminated the front door with Novichok," Basu said, referring to the Skripals' house.

On Sunday evening, March 4, they boarded a plane at London's Heathrow airport and returned to Moscow.

"We have no evidence that they have reentered the U.K. after that date," Basu said, adding that public health officials do not believe there is any risk to people who were on the same flights or trains as the two suspects.

That same day, March 4, the Skripals were found slumped on a park bench in Salisbury. Yulia Skripal, 33, was unconscious. Sergei Skripal, 66, appeared to be hallucinating. First responders first suspected a drug overdose, but later at the hospital, doctors suspected poisoning. Britain's military research laboratory confirmed that the poison was a Soviet-era nerve agent.

"It is clearly in the public interest to charge Alexander Petrov and Ruslan Boshirov," Sue Hemming, the Crown Prosecution Service's director of legal services, said in a statement.

Hemming said Britain would not apply to Russia to extradite the men because the country's constitution does not allow the extradition of Russian nationals.

But Hemming said Britain has obtained a European arrest warrant for Petrov and Boshirov.

In Moscow, Russian authorities were dismissive.

Kremlin spokesman Dmitry Peskov told Interfax news agency: "From the very beginning, Russia has been ready to cooperate with Scotland Yard in the Skripal investigation, but was met with either refusal or silence."

"The names, just like the photos, published in the media tell us nothing," said Russian Foreign Ministry spokeswoman Maria Zakharova, according to Interfax.

"Again we are calling on the U.K. to move away from public accusations and informational manipulations, and toward practical cooperation between law enforcement agencies," she said.

The names of the two men, "Alexander Petrov" and "Ruslan Boshirov," are "John Smith" equivalents in Russia and Russian Muslim areas and are assumed to be aliases, analysts in Moscow said.

"We believe this is a provocation," Alexander Shulgin, Russia's permanent representative to the Organization for the Prohibition of Chemical Weapons, told state television on Wednesday.

"We said right away that Russia had nothing to do with the Salisbury incident," Shulgin said.

The Washington Post’s Amie Ferris-Rotman in Moscow contributed to this report.