Trump to world leaders: China out to meddle in 2018 election 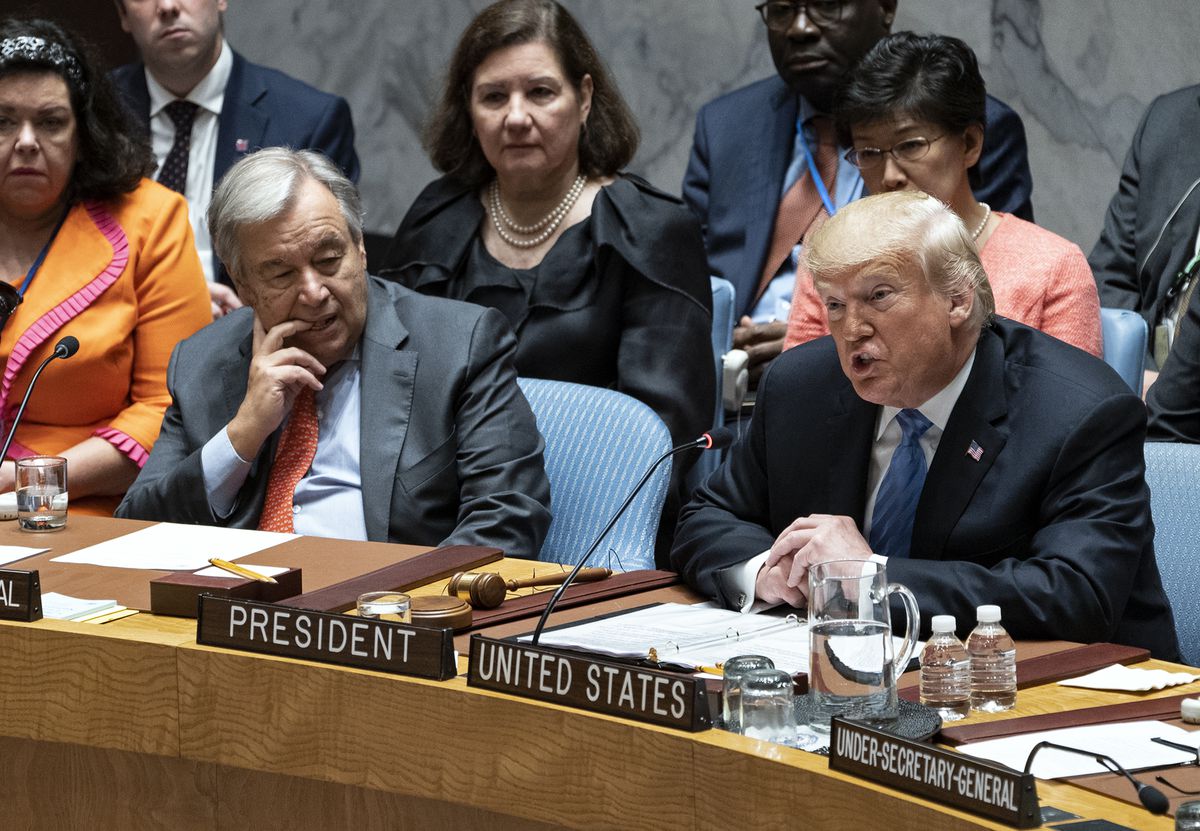 UNITED NATIONS — Taking center stage at the United Nations, President Donald Trump on Wednesday accused China of trying to interfere in the upcoming U.S. congressional elections because it opposes his tough trade policies. The White House provided scant evidence of anything akin to the level of Russia’s meddling in the 2016 presidential election.

"They do not want me or us to win because I am the first president ever to challenge China on trade," Trump said as he chaired the U.N. Security Council for the first time. He made his accusation against the backdrop of the special counsel's investigation into Russian interference in the last election to help him and amid concerns that this November's elections also could be vulnerable.

Asked later what evidence he had, Trump said there was "plenty" but didn't provide details. Instead, he zeroed in on China's propaganda efforts to flood the heartland with ads and statements against Trump's hundreds of billions of dollars in punishing tariffs

China's foreign minister shrugged when he heard Trump's statement via translation at the Security Council.

A senior Trump administration official who briefed reporters about Trump's comments said China was stepping up covert and overt activities to punish those who support Trump's tough trade stance and interfere in the political system. The only specifics given by the official, who spoke on condition of anonymity, were that China is hurting farmers and workers in states and districts that voted for Trump.

The official said China stifles free speech on U.S. campuses and punishes or rewards businesses, think tanks, movie studios and political candidates for criticizing or supporting Chinese politics. The official added that more information would be declassified in coming days and that Vice President Mike Pence was expected to speak on the issue next week.

Democrats on the House intelligence committee requested information from the Trump administration on the Chinese efforts.

Trump leveled his charge against China amid a whirlwind day of diplomacy at the United Nations, where he had meetings with Japan's Shinzo Abe, Israel's Benjamin Netanyahu and Britain's Theresa May. Alongside Netanyahu, Trump offered his most explicit endorsement yet of the two-state solution to bring an end to the decades-long conflict between Israel and the Palestinians.

The president also used his moment chairing the Security Council meeting on nuclear proliferation to issue a strong warning to nuclear-aspirant Iran, which he deemed the "world's leading sponsor of terror" fueling "conflict around the region and far beyond."

Trump, in his meeting with Abe, warned China again that "they can't get involved with our elections," strong rhetoric that stood in stark contrast to his reluctance to acknowledge or condemn Russia's efforts to interfere with the 2016 election. Trump has repeatedly cast doubt on the conclusions of U.S. intelligence agencies and refused to chastise Russia's Vladimir Putin during their summer summit in Helsinki.

There is extensive evidence linking Russia to attempts to penetrate U.S. elections systems and to influence U.S. voters. Facebook announced in July that it had uncovered "sophisticated" efforts, possibly linked to Russia, to influence U.S. politics on its platforms. Thirty-two accounts were removed from Facebook and Instagram because they were involved in "coordinated" political behavior and appeared to be fake. Nearly 300,000 people followed at least one of the accounts.

Microsoft also said it had discovered that a fake domain had been set up as the landing page for phishing attacks by a hacking group believed to have links to Russian intelligence. A Microsoft spokesman said Monday that additional analysis had confirmed that the attempted attacks occurred in late 2017 and targeted multiple accounts associated with the offices of two legislators running for re-election.

With the elections less than two months away, U.S. intelligence and election-protection officials have not cited any specific, credible Chinese efforts.

Officials say China's cyber-espionage operations targeting U.S. defense and commerce have been formidable, however. And Trump's claim comes amid an escalation of tensions between Washington and Beijing, spurred by their growing trade dispute.

Each imposed tariff increases on the other's goods Monday, and Beijing accused the Trump administration of bullying. A Chinese official said China cannot hold talks on ending the trade dispute while the U.S. "holds a knife" to Beijing's neck by hiking tariffs. Trump later tweeted out a photo of an advertising insert called "China Watch," saying China was placing propaganda ads in the Des Moines Register and other papers to make it look like news.

U.S. intelligence officials have said they are not now seeing the intensity of Russian intervention registered in 2016 and are also concerned about activity by China, Iran and North Korea. Trump's statement caught lawmakers and some national security officials off guard as Beijing has not been singled out as the most worrisome foe.

"I haven't received any briefing on this and would have if it was a serious threat," said Rep. Jim Himes, D-Conn., a member of the House intelligence committee. "If the president really wants to protect elections, there are many bipartisan bills he could support."

Thomas Rid, a Johns Hopkins cybersecurity expert, said, "I am not aware of any evidence of Chinese interference in the midterm elections." He added: "Chinese influence operations tend to be more subtle, less public, and business-related."

China has been accused of interfering in an election before, although not in the United States. Cybersecurity firm Fire Eye released a report in July describing "active compromises of multiple Cambodia entities related to the country's electoral system," including the National Election Commission, before the country's July 29 general elections.

"I've seen zero evidence in our own monitoring work that China is doing anything like that," said Jake Williams, president of Rendition Infosec, a Georgia cybersecurity firm, "and none of the people in industry I share threat intelligence with have had a whisper of that."