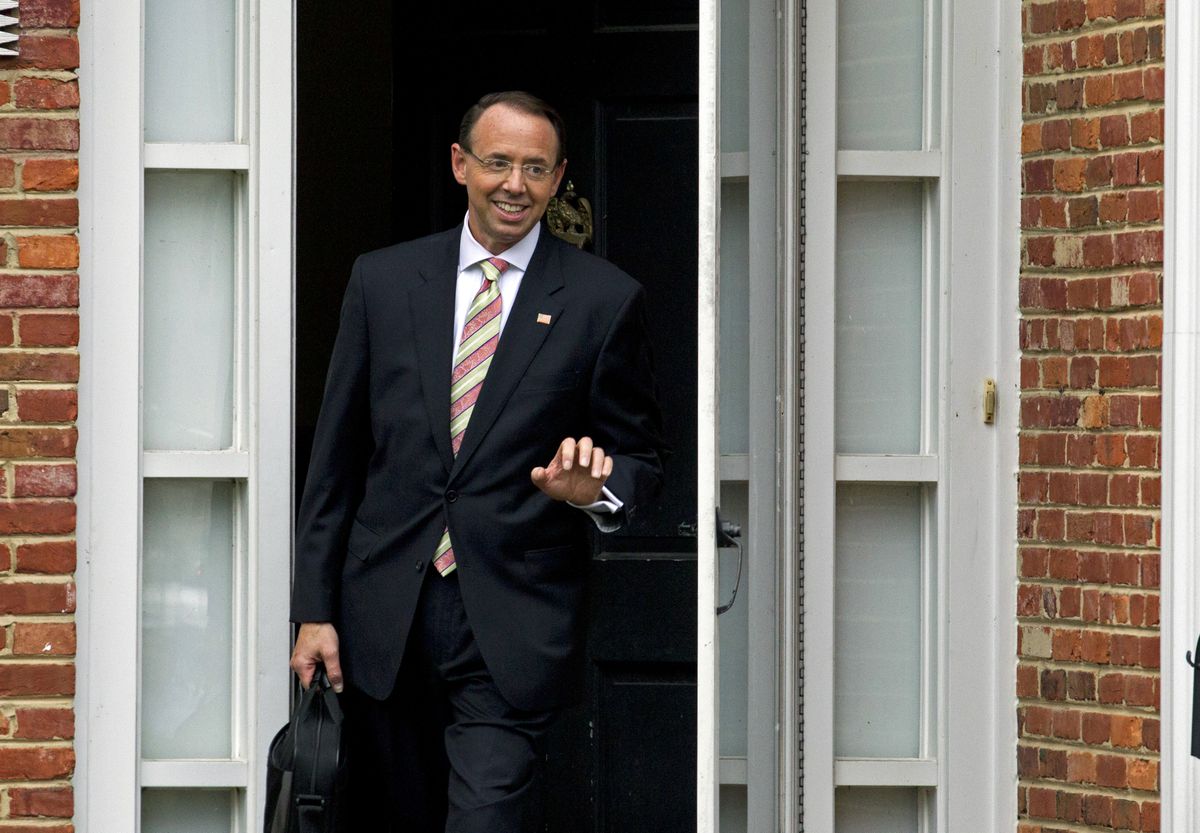 Deputy Attorney General Rod Rosenstein leaves his home on Thursday, Sept. 27, 2018 in Bethesda, Md. President Donald Trump's meeting with the deputy attorney general may or may not happen Thursday as originally planned, but Trump says he'd prefer not to fire Rosenstein regardless. (AP Photo/Jose Luis Magana)

Deputy Attorney General Rod Rosenstein leaves his home on Thursday, Sept. 27, 2018 in Bethesda, Md. President Donald Trump's meeting with the deputy attorney general may or may not happen Thursday as originally planned, but Trump says he'd prefer not to fire Rosenstein regardless. (AP Photo/Jose Luis Magana)

WASHINGTON - House Republicans have decided to call deputy attorney general Rod J. Rosenstein back to Capitol Hill and subpoena him if he doesn’t show, according to Rep. Mark Meadows, R-N.C., who tweeted early Friday that there was an agreement with GOP leadership for the plan.

"Leadership has agreed to call Rod J. Rosenstein before Congress . . . so he can explain his alleged comment on 'wiring' POTUS - as well as other inconsistent statements," Meadows wrote, referring to President Donald Trump. "If Mr. Rosenstein fails to show up, we will subpoena him."

Representatives of House Speaker Paul D. Ryan, R-Wis., House Judiciary Committee Chairman Rep. Bob Goodlatte, R-Va., and House Oversight and Government Reform Committee chairman Rep. Trey Gowdy, R-S.C., did not immediately respond to requests for comment. The Judiciary, and Oversight and Government Reform committees have been conducting a joint probe into the FBI's and Justice Department's conduct during their investigations into Trump's alleged Russia ties and former secretary of state Hillary Clinton's use of a private email server.

Memos kept by former deputy FBI director Andrew McCabe said that Rosenstein suggested secretly recording the president, potentially as part of a plan to remove him from office under the 25th amendment. Rosenstein has vehemently denied he ever suggested anything of the kind, but offered to resign his post in the wake of the reports. He is expected to meet with Trump next week to discuss the matter.

The reports that Rosenstein suggested taping Trump touched off a firestorm from conservative Republicans, who had been pummeling the deputy attorney general to turn over documents that they have requested as part of a probe scrutinizing the Justice Department and FBI's conduct during their investigations of Trump and Clinton. Over the summer, those Republicans attempted to secure a vote on a resolution to impeach Rosenstein, but in recent weeks, their crusade against the deputy attorney general lost the backing of top GOP officials, who felt that Rosenstein's DOJ was complying with the requests.

But in recent days, top GOP officials have been backing conservative Republicans' demands for more information. On Thursday, the House Judiciary Committee subpoenaed McCabe's memos, along with several documents related to the FBI's application to conduct surveillance on former Trump campaign adviser Carter Page, and documents about the Justice Department's Russia probe that had already been shared with the Gang of Eight, a bipartisan group of congressional and intelligence committee leaders who receive the most sensitive intelligence briefings.

An agreement from GOP leaders to call Rosenstein to testify puts to rest any lingering speculation that the House would schedule a vote to impeach Rosenstein during the last few days that lawmakers are in town, before departing Washington for an extended pre-midterm campaign period. Meadows's tweet did not say exactly when he expected Rosenstein to appear on Capitol Hill, but it will surely be after most lawmakers are scheduled to be away from Washington.

Earlier this week, Meadows said that he wanted Rosenstein to testify next week. On Thursday, Rep. Jim Jordan, R-Ohio, said he thought Republicans were "moving in a good direction as far as getting Mr. Rosenstein to come before Congress," and that he expected Rosenstein would meet with lawmakers "soon."

Jordan also added that the joint committee plans next week to meet with former FBI general counsel Jim Baker. Lawmakers are also expected to meet during the third week of October with Nellie Ohr, a former contractor for Fusion GPS, the firm behind a dossier detailing Trump’s alleged personal and business ties to Russia, according to two members. Ohr is married to Bruce Ohr, a Justice Department official who met on several occasions with former British intelligence officer Christopher Steele, who compiled the information in the dossier.