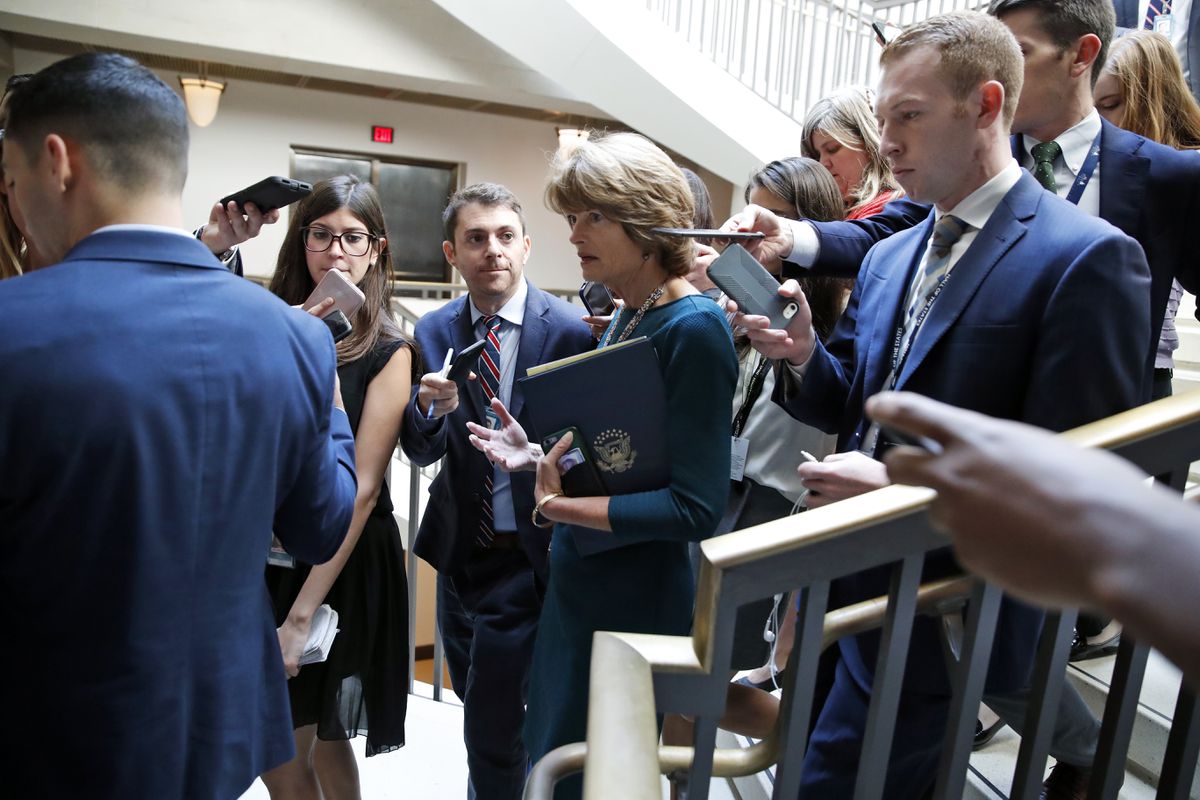 Sen. Susan Collins of Maine, one of three Republicans who had not indicated how they plan to vote, said Thursday that "it appears to be a very thorough investigation, but I'm going back later to personally read the interviews."

Collins, Flake and Sen. Lisa Murkowski, R-Alaska, are the critical votes that could ensure Kavanaugh's ascension to the nation's highest court.

On Thursday afternoon, Sen. Heidi Heitkamp of North Dakota, a red-state Democrat whose vote Republicans were courting, told a television station in her state that she would vote no on Kavanaugh. That leaves Sen. Joe Manchin III of West Virginia as the only Democrat still undecided on the nomination.

Murkoswki told reporters that she did not yet know whether the FBI had been thorough enough in its investigation or spoken to enough witnesses. Asked whether she felt she had been given enough time to consider her decision before voting this weekend, Murkowski added: “I certainly hope so, yes.”

The comments came as leading Democrats and Republicans offered dueling assessments of the FBI background check into allegations of sexual misconduct by Kavanaugh, who has faced multiple accusers, including Christine Blasey Ford, who says he assaulted her while they were teenagers.

Judiciary Committee Chairman Chuck Grassley, R-Iowa, said Thursday that the report included "no hint of misconduct," while senior Democrats called it incomplete and suggested that the White House limited the probe to protect Kavanaugh.

Neither Ford nor Kavanaugh were interviewed by the FBI for what senators said was a 46-page report that delayed the roiled confirmation process by a week. Lawyers for Kavanaugh's accusers also criticized the probe, saying the FBI had declined to interview witnesses they suggested.

"There's nothing in it that we didn't already know," Grassley said in a statement after being briefed on the FBI report by his staff. "It's time to vote."

Sen. Dianne Feinstein of California, the top Democrat on the committee, later told reporters that "the most notable part of this report is what's not in it."

Senate Minority Leader Chuck Schumer, D-N.Y., who appeared beside her at a news conference, blamed the White House for the limited scope of the latest probe.

"We had many fears that this was a very limited process that would constrain the FBI from getting all of the facts," he said. "Those fears have been realized."

Schumer said he disagreed with Grassley's assessment that there is "no hint of misconduct" but declined to elaborate or take questions.

White House spokesman Raj Shah said that the FBI agents had reached out to 10 witnesses - nine of whom were interviewed - and that no one had corroborated the account of Ford, the first woman to accuse Kavanaugh of sexual assault.

"The president, the White House are firmly behind Brett Kavanaugh," Shah said during an appearance Thursday morning on CNN. "We believe that all the Senate's questions have been addressed through this supplemental FBI investigation."

In an earlier tweet, Shah said the White House is "fully confident" that the Senate will confirm Kavanaugh, whose nomination has been roiled by the allegations of three women about his behavior more than three decades ago.

Sen. Christopher Coons, D-Del., seemed to acknowledge that there was no corroboration for Ford's charges in the FBI report, but blamed the scope of the investigation.

"You can't find what you don't look for," he said, adding that "this falls short of my expectations for this investigation."

The FBI interviewed three people who Ford said attended the gathering where she said she was assaulted, as well as two other friends of Kavanaugh's who were listed on his calendar as attending a gathering on July 1 of the same summer that Ford said she believes the alleged assault occurred.

Ford was never focused on July 1 as the date that the assault occurred, a member of her legal team told The Washington Post this week, emphasizing that the FBI would have known that if agents had interviewed Ford.

On Thursday afternoon, attorneys for Ford released a letter they wrote to FBI Director Christopher Wray, ticking off the names of eight witnesses who wanted to be interviewed about Ford's allegation by the FBI. The list included Ford's husband, Russell; Jeremiah Hanafin, the former FBI agent who conducted Ford's polygraph exam; and friends of Ford's whom she confided in about her accusation.

"The 'investigation' conducted over the past five days is a stain on the process, on the FBI and on our American ideal of justice," the lawyers wrote in the four-page letter to Wray.

Sen. Bob Corker, R-Tenn, said that nine of the FBI report's 46 pages came from a three-hour interview with Mark Judge, a former classmate of Kavanaugh whom Ford claims was present at the time of the alleged assault in the early 1980s. Judge has denied her claim.

Sen. John Thune, R-S.D., said the report showed that FBI agents had asked "pretty specific" questions, in some cases using a calendar kept by Kavanaugh. "I think they really tried to find out as much as they could, matching up dates and places."

In morning tweets, Trump decried what he said was "harsh and unfair treatment" of Kavanaugh, who has undergone previous FBI background checks for other federal jobs, and accused Democrats of obstructing the confirmation process.

"This is now the 7th. time the FBI has investigated Judge Kavanaugh," Trump wrote. "If we made it 100, it would still not be good enough for the Obstructionist Democrats."

During a speech on the Senate floor, Sen. John Cornyn, R-Texas, touted the way Republicans had rallied around Kavanaugh despite an onslaught of unproven allegations.

"Some commentators have called this our Atticus Finch moment," he said, referencing the white lawyer in the classic novel "To Kill a Mockingbird," who defends a black man accused of raping a young white woman in Alabama in the 1930s. Despite significant evidence of his innocence, the black man is convicted and is later killed when he tries to flee his captors.

"We all remember that Atticus Finch was a lawyer who did not believe that a mere accusation was synonymous with guilt," Cornyn said. "We could learn from Atticus Finch now, during this time when there has been such a vicious and unrelenting attack on the integrity and good name of this nominee."

In his statement, Grassley said that "this investigation found no hint of misconduct and the same is true of the six prior FBI background investigations conducted during Judge Kavanaugh's 25 years of public service."

In tweets starting around 4 a.m., Grassley announced that the panel had received the report from the White House and that he and its top Democrat had "agreed to alternating EQUAL access for senators to study content from additional background info gathered by nonpartisan FBI agents."

A few hours later, senators began filing in and out of a secure facility at the Capitol to review the FBI report.

The FBI's report is available at a sensitive compartmented information facility, or SCIF, in the Capitol Visitor Center, a secure room designed for senators to review sensitive or classified material, two Senate officials said. Just one physical copy of the report is available, and only senators and 10 committee staffers are cleared to view the material.

To flesh out some key passages, Judiciary Committee staffers were reading communications between two people detailed in the report out loud, so senators could visualize the conversation, Sen Mike Rounds, R-S.D., said.

The report also included details about the mass of information that flooded into the FBI tip line, Rounds said - about several hundred calls that were reviewed by the FBI to see whether the tips were related to the investigation, Rounds said.

Even before the report was formally sent to the Senate, lawyers for Ford criticized what they viewed as an incomplete FBI probe.

"An FBI supplemental background investigation that did not include an interview of Dr. Christine Blasey Ford - nor the witnesses who corroborate her testimony - cannot be called an investigation," her legal team said in a statement. "We are profoundly disappointed that after the tremendous sacrifice she made in coming forward, those directing the FBI investigation were not interested in seeking the truth."

On Thursday, a lawyer for Deborah Ramirez, who has accused Kavanaugh of exposing himself while in college, sent a letter to the FBI's Wray making the same claim.

The letter noted that Ramirez had been interviewed by the FBI for two hours Sunday in Colorado and later provided a list of 20 people who might corroborate her account of Kavanaugh's behavior.

"Fewer than four days, later, however, the FBI apparently has concluded its investigation - without permitting its agents to investigate," wrote Ramirez lawyer William Pittard. "We are deeply disappointed by this failure."