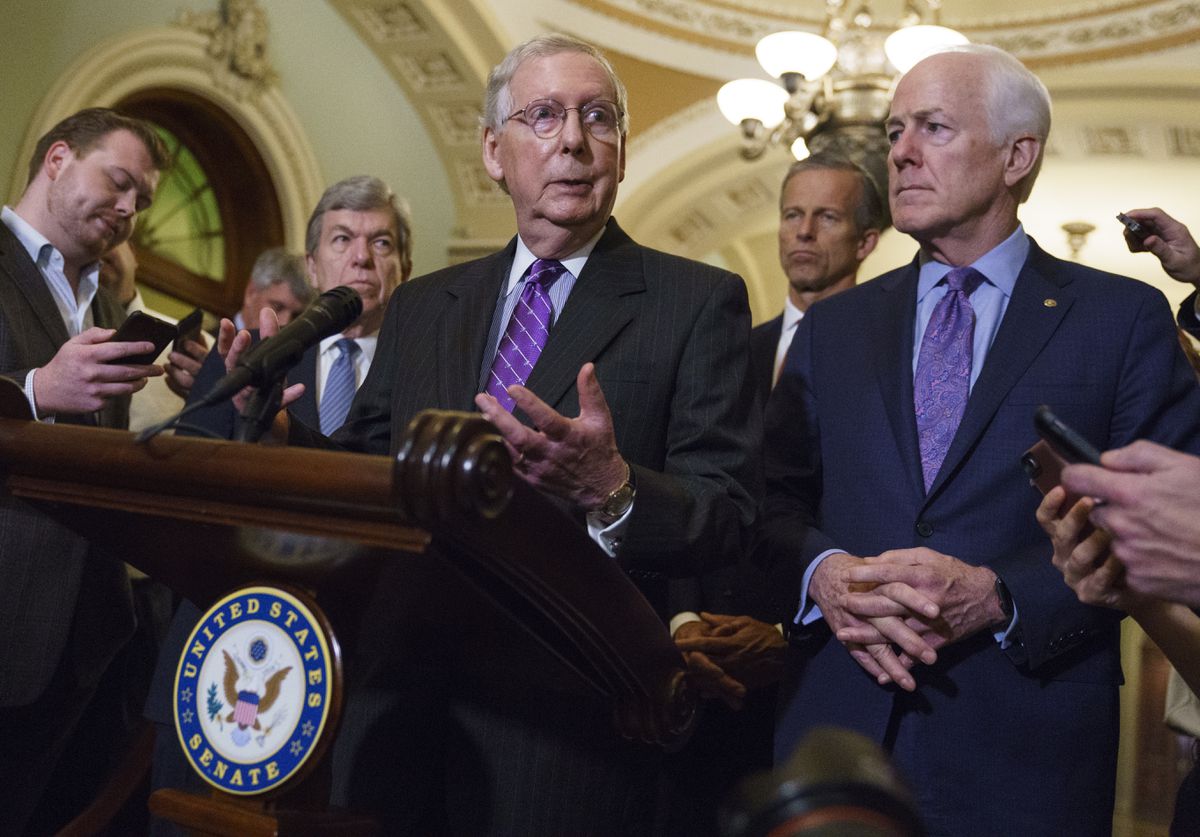 WASHINGTON - Senate Republicans were defiant on Sunday, one day after Brett Kavanaugh was sworn in as the 114th Supreme Court justice, brushing aside concerns about how they handled the brutal confirmation process and the potential costs in next month’s midterm elections.

But Republicans also faced sharp questions about the fallout in a fast-changing country that has seen the #MeToo movement gain prominence and Democratic voters electrified in opposition to President Donald Trump and to Kavanaugh.

Senate Majority Leader Mitch McConnell, R-Ky., suggested that the GOP's base voters could reward them with strong turnout for standing by Kavanaugh in the face of sexual assault allegations that prompted protests and outrage from both sides of the political aisle.

"We stood up to the mob," McConnell said on "Fox News Sunday." "We established that the presumption of innocence is still important. I'm proud of my colleagues."

[Blasted by Trump and her own party, and praised by others, Murkowski takes independent course again in Kavanaugh vote]

McConnell's charged language was shared by other Republicans, who referred to Saturday's near-party-line vote of 50 to 48 as both a galvanizing and polarizing moment.

"I've never been more pissed in my life," Sen. Lindsey Graham, R-S.C., a Trump ally, said on "Fox News Sunday." "I've never campaigned against a colleague in my life. That's about to change."

Senate Democrats, disappointed by Kavanaugh’s ascension, argued that many voters nationally - and women, in particular - remain infuriated by Republicans' treatment of Christine Blasey Ford, who detailed in emotional testimony her allegations that Kavanaugh sexually assaulted her when they were teenagers. Kavanaugh has denied the allegations.

Sen. Mazie Hirono, D-Hawaii, who gained national notice during the confirmation fight for urging men to "shut up and step up" in the wake of Ford's allegations, said Democratic voters would be highly motivated to turn out and punish Republicans for the limited FBI probe of Kavanaugh following his hearing.

"He's going to be on the Supreme Court with a huge taint and a big asterisk after his name," Hirono said on ABC News' "This Week." "Everyone knows when you just interview a small number of people and not the dozens of others who wanted to be interviewed by the FBI, it's a sham."

Rep. Jerrold Nadler, D-N.Y. - who would chair the House Judiciary Committee should Democrats win the House majority next month - has said he plans to launch an investigation of Kavanaugh if Democrats win power.

Other Democrats, however, took a different approach to the impeachment question, mere weeks ahead of the elections in which they are eager to rally their core voters and reach out to moderates and independents.

Sen. Christopher Coons, D-Del., was cautious when asked about the prospect of Democrats moving to impeach Kavanaugh should they hold the House majority.

"I think that's premature," Coons said on NBC News' "Meet the Press." "I think talking about it at this point isn't necessarily healing us and moving us forward."

Coons, instead, turned his attention to Trump for mocking Ford last week and said the Kavanaugh controversy was an indictment of the president's character as much as it was a battle within the Senate, coming as more women are speaking up about harrowing experiences.

"One of the biggest tragedies of this past week was to watch the president of the United States publicly mocking and ridiculing Dr. Ford," the senator said, calling it a "low mark in his presidency."

" 'I don't know. I don't know.' 'Upstairs? Downstairs? Where was it?' 'I don't know. But I had one beer. That's the only thing I remember,' " Trump said of Ford, as he impersonated her on stage.

[Trump says Murkowski ‘will never recover’ for voting no on Kavanaugh]

Sen. Susan Collins, R-Maine - whose vote was decisive - appeared on CBS News' "Face the Nation" and was far more measured as she stood by her decision to support Kavanaugh.

"I am convinced that Dr. Ford believes what she told us and that she was the victim, a survivor of sexual assault and that that has been a trauma that has stayed with her for her entire life," Collins said.

But, she said, "I could not conclude that Brett Kavanaugh was her assailant."

When pressed by moderator John Dickerson about whether her view on Ford may be viewed by her critics as skepticism generally of women who have shared similar stories, Collins defended her position and said she was evaluating a specific case.

"When I hear that, it causes me huge pain because I have met with so many survivors of sexual attacks, including close friends. And these women have the right to be heard," she said.

Collins, who will face re-election in 2020, said she was not alarmed by Democrats' calls for her to be challenged following her vote for Kavanaugh, with some urging Susan Rice, who was ambassador to the United Nations under President Barack Obama, to run.

"Her family has a home in Maine, but she doesn't live in the state of Maine," Collins said on CNN's "State of the Union."

The political scramble extended to Senate Democrats, with those of them running in states won by Trump in 2016 explained a critical vote that could, in part, determine their fate.

One of them was Sen. Heidi Heitkamp, N.D., who told CBS' "60 Minutes" that her opposition to Kavanaugh was based not only on Ford's testimony but on her disappointment with Kavanaugh's combative testimony and her lingering questions about his answers.

"What I would say is - even if you don't believe or believe Dr. Ford, the other issue is one of temperament, one of impartiality and blind justice," Heitkamp said. "And I think that adds to the case being made that a 'no' vote is the appropriate vote."

Heitkamp added, "I think that the politically expedient vote here was a 'yes' vote ... (but) this isn't about politics."

The Washington Post’s Seung Min Kim and Josh Dawsey contributed to this report.

Robert Costa is a national political reporter for The Washington Post. He covers the White House, Congress, and campaigns. He joined The Post in January 2014. He is also the moderator of PBS's "Washington Week" and a political analyst for NBC News and MSNBC.