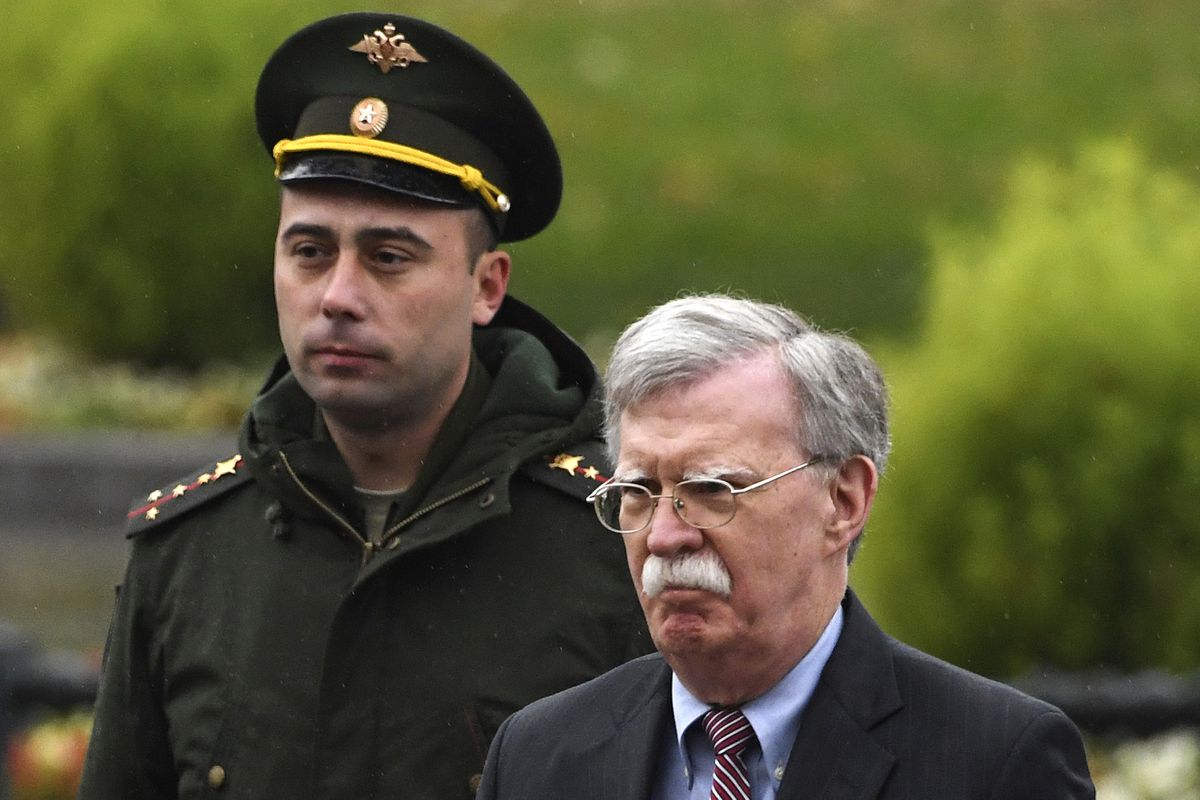 Bolton gave no specific details on the next possible U.S. steps to withdraw from the deal to limit intermediate-range nuclear weapons.

But Bolton echoed Trump's assertions of Russian violations of the pact, suggesting that no progress was made to ease the impasse during Bolton's talks with top Russian officials including President Vladimir Putin.

The Kremlin denies any violations and says scrapping the 31-year-old Intermediate-Range Nuclear Forces Treaty, or INF, would be a "dangerous" development and could spark a new arms race.

In a bit of dark humor that underscored the moment, Putin quipped about the balance between peace and force represented by the Great Seal of the United States.

"As far as I can remember, the U.S. seal depicts an eagle on one side holding 13 arrows, and on the other side an olive branch with 13 olives," Putin said, sitting across from Bolton at talks before the news conference. "Here's the question, 'Did your eagle already eat all the olives and only the arrows are left?'"

"Hopefully I'll have some answers for you," Bolton replied. "But I didn't bring any more olives."

"That's what I thought," Putin said, provoking laughter from Bolton.

But Bolton's mission wades deep into the current frictions between Washington and Moscow.

It remains unclear whether Trump's pledge to pull out of the treaty could be a negotiating tactic to possible rewrite the rules or bring in other nations such as China. But more dialogue could be ahead.

Putin confirmed plans to meet Trump on the sidelines of World War I memorial events in France next month.

"Of course, there are some weak spots," Kremlin spokesman Dmitry Peskov said of the INF treaty on Tuesday, before Bolton's planned meeting with Putin. "However, the dismantlement of this treaty without proposing anything new is obviously not what we would welcome."

President Ronald Reagan and Soviet leader Mikhail Gorbachev signed the INF treaty in 1987, leading to the elimination of an entire category of nuclear missiles and the removal of more than 2,500 of them from installations across Europe.

Despite Trump's announcement of a withdrawal, Russian officials struck a conciliatory tone in public for Bolton's visit.

Bolton's visit to Moscow was his second in his role as Trump's national security adviser, signaling the Trump administration's intention to maintain contact with Russia despite the uproar in Washington over its interference in the 2016 election.

After meeting with his Russian counterpart Nikolai Patrushev on Monday, Bolton told the Echo of Moscow radio station he had raised the issue in his talks with Russian officials.

"The point I made to Russian colleagues today was that I didn't think, whatever they had done in terms of meddling in the 2016 election, that they had any effect on it, but what they have had an effect in the United States is to sow enormous distrust of Russia," Bolton said. "I said, just from a very coldblooded cost benefit ratio, that you shouldn't meddle in our elections because you're not advancing Russian interest, and I hope that was persuasive to them."

Bolton deployed the symbolism of wreath-laying to both signal respect for Kremlin authority and to show criticism of repression of the political opposition in Moscow.

He laid a wreath at the Tomb of the Unknown Soldier at the Kremlin wall. He did the same at the unofficial memorial just outside the Kremlin wall marking the spot where opposition politician Boris Nemtsov was killed in 2015.