The deadly price of conspiracy theories 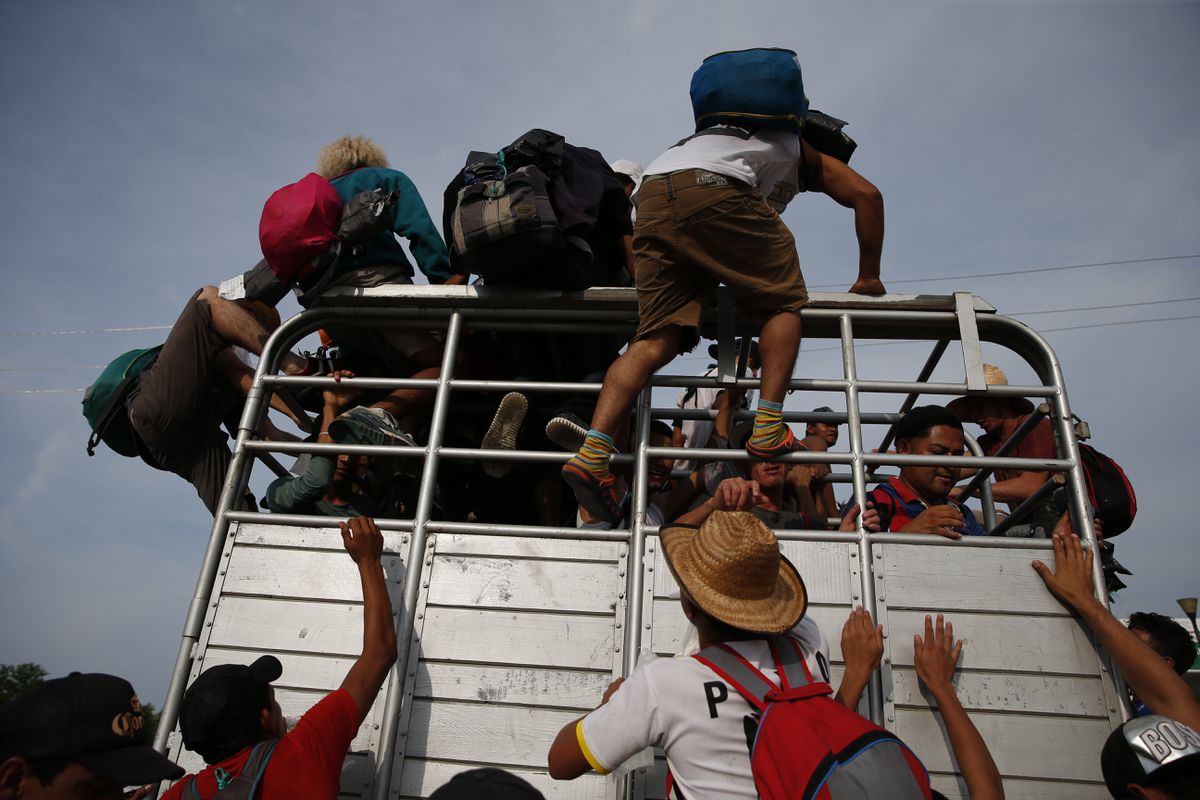 Migrants climb atop a truck as a caravan of thousands of Central Americans continues its slow march toward the U.S. border, outside Arriaga, Mexico, Saturday, Oct. 27, 2018. Many migrants said they felt safer traveling and sleeping with several thousand strangers in unknown towns than hiring a smuggler or trying to make the trip alone.(AP Photo/Rebecca Blackwell)

Migrants climb atop a truck as a caravan of thousands of Central Americans continues its slow march toward the U.S. border, outside Arriaga, Mexico, Saturday, Oct. 27, 2018. Many migrants said they felt safer traveling and sleeping with several thousand strangers in unknown towns than hiring a smuggler or trying to make the trip alone.(AP Photo/Rebecca Blackwell)

Conspiracy theories are flourishing in America, from the Oval Office to the fever swamps of the Internet. They include the viral notion that the liberal 88-year-old billionaire George Soros, a Hungarian American Holocaust survivor, is funding the migrant caravan slowly making its way from Central America in the direction of the United States.

It's not true, but it has apparently fueled homicidal rage in recent days.

Cesar Sayoc, the Florida man whom authorities have accused of mailing more than a dozen bombs to people and organizations President Donald Trump has criticized, appeared to be obsessed with Soros, mentioning him dozens of times on one of his Twitter accounts. He allegedly mailed one of his bombs to Soros.

Robert D. Bowers, charged with killing 11 people Saturday at a Pittsburgh synagogue, also reposted several viral comments on a since-deactivated social media account about the migrant caravan. One post described the "third world caravan" as a group of approaching "invaders."

Bowers directly posted a comment referring to "the overwhelming jew problem." He spoke of the U.S. having a Jewish "infestation," and reposted another user's anti-Semitic comment: "Jews are waging a propaganda war against Western civilization and it is so effective that we are headed towards certain extinction within the next 200 years and we're not even aware of it."

The Soros/caravan theory dates to late March, when an earlier wave of migrants was heading north, according to an extensive blog post on Medium by Jonathan Albright, director of the Digital Forensics Initiative at Columbia University’s Tow Center for Digital Journalism. One Twitter post, which had no factual foundation, stated, “Caravan of 1,500 Central American Migrant Families Crossing Mexico to Reach U.S. Border All organized by Soros groups to cause more division.”

The rumors circulated on closed Facebook groups and various right-wing websites, as well as on left-wing sites seeking to debunk them. They cropped up again in recent weeks when a new caravan started receiving attention among conservatives. Trump warned without evidence that people from the Middle East were among the Central Americans. A Florida congressman, Matt Gaetz, R, posted a video on Twitter of someone supposedly handing cash to migrants to “storm the US border,” and he asked: “Soros?”

Lou Dobbs, host of a show on Fox Business, tweeted on Oct. 23, "Do you think the Radical Left is working with Central and South American socialists and leftists to organize and support the migrant caravan?"

As Albright put it: "There are no barriers for rumors, misinformation and memes. It's 'Rumors Without Borders.' "

The Soros-caravan conspiracy theory weaves together anti-Semitism, fear of immigrants and the specter of powerful foreign agents controlling major world events in pursuit of a hidden agenda. And it appears to have had real-world consequences on Saturday for Jews attending services,including a baby-naming ceremony, in their synagogue in Pittsburgh's Squirrel Hill neighborhood.

Anti-Semitism has deep roots in American culture, dating to Colonial times and especially flourishing in the late 19th century when Jewish immigrants began arriving in large numbers. When automobile magnate Henry Ford took control of his local newspaper, the Dearborn Independent, in 1919, he published anti-Semitic columns eventually compiled into a book titled "The International Jew." The newspaper translated and published "Protocols of the Elders of Zion," an anti-Semitic hoax originally written in Russian and supposedly outlining a Jewish conspiracyto control the world.

Ford spread his anti-Semitic theories by mailing newspapers to his car dealerships across the country. The effort by Ford and prominent anti-Semitic preachers such as Father Coughlin aroused a latent anti-Jewish fervor, and a pro-Nazi rally in 1939 at New York's Madison Square Garden drew an enthusiastic crowd of 20,000 at which German American Bund leader Fritz Kuhn decried the "Jewish-controlled press" and called for a "white, Gentile-ruled United States."

In the 21st century, the Internet and social media have allowed paranoia and rage to spread virally, and have enabled hateful ideologues and racists to find one another and find affirmation for their toxic beliefs. They find common purpose in defining and demonizing their perceived enemies.

"The Jews are just the usual suspects," said Bob Goldberg, a professor at the University of Utah and author of "Enemies Within: The Culture of Conspiracy in Modern America." The normalization of conspiracy theories can have lethal consequences "in a nation armed to the teeth," he said.

"Most anti-Semitism is in some way based on some form of conspiracy theory," said Oren Segal, director of the Anti-Defamation League's Center on Extremism. "Conspiracies that used to be on the margin, almost laughable, are now becoming literally part of the public discussion."

Conspiracy theories can be reassuring to people: They impose a kind of order on a chaotic world. Theytell people there's a reason things happen the way they do. And bad people are to blame.

One of the most prominent 21st century conspiracy theories comes from the "truthers." They claim that Sept. 11, 2001, was an inside job, known to the U.S. government at the highest levels. A common variant is that the World Trade Center towers were destroyed by explosives, not by planes. Truthers are an ideological mix, including many on the political left, although perhaps the most famous is Alex Jones, the right-wing provocateur who has promoted a litany of "false flag" conspiracy theories.

Perhaps the most politically consequential conspiracy theory came from the "birthers." They believe former President Barack Obama was not born in the United States (he was born in Hawaii). Some claim he is a Muslim (he's a Christian). The theory feeds into the "Manchurian Candidate" scenario - that Obama is secretly an agent of a foreign power.

The most prominent person to embrace the birther conspiracy theory in the early years of this decade was Donald Trump.

Trump has promoted numerous conspiracy theories and pseudoscientific ideas that have a conspiratorial element - including the false assertions that climate-change science is a Chinese hoax and that vaccines cause autism.

"I don't know if the whole country is becoming unhinged. Part of the problem is we have a president who pushes conspiracy theories, and he put together a coalition of conspiracy-minded Republicans to support him," said Joseph Uscinski, a professor of political science at the University of Miami and co-author of "American Conspiracy Theories."

"During the campaign he was spewing conspiracy theories constantly - whether it was the birther thing or Ted Cruz's dad killed JFK," Uscinski said. "If you put Donald Trump's campaign into perspective, he was talking about trade deals and immigrants all the time, because that's something Americans historically are conspiracy-theorizing about."

Trump’s conspiracy-mongering has not abated since he took office. But he has distanced himself from one term, “deep state,” that has an ominous tinge to it. Trump recently told the Hill that he doesn’t like the term “because it sounds so conspiratorial, and believe it or not I’m really not a conspiratorial person.”