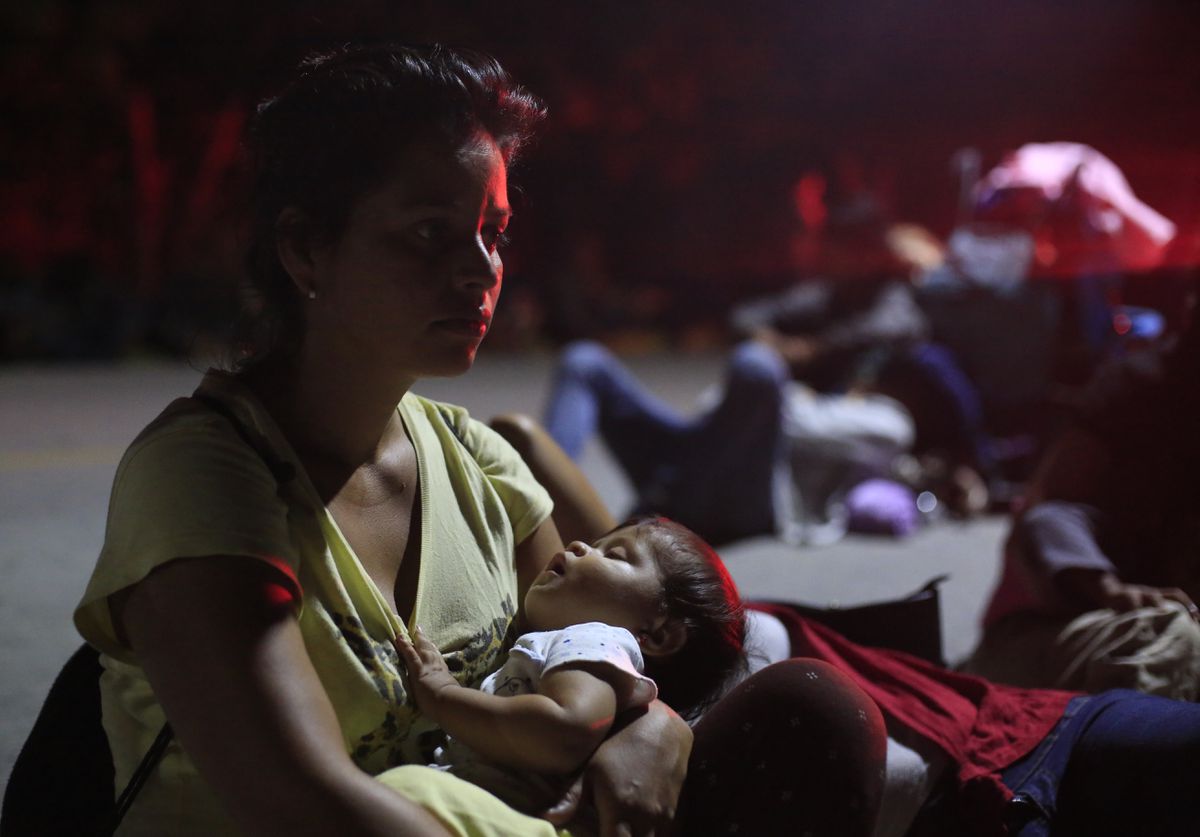 A woman holding her sleeping baby waits in hopes of hitching a ride, as a thousands-strong caravan of Central Americans continues its slow march toward the U.S. border, in Tapanatepec, Oaxaca state, Mexico, before dawn on Monday, Oct. 29, 2018. Thousands of migrants traveling together for safety resumed their journey after taking a rest day Sunday, while hundreds more migrants were pushing for entry to Mexico.(AP Photo/Rebecca Blackwell)

A woman holding her sleeping baby waits in hopes of hitching a ride, as a thousands-strong caravan of Central Americans continues its slow march toward the U.S. border, in Tapanatepec, Oaxaca state, Mexico, before dawn on Monday, Oct. 29, 2018. Thousands of migrants traveling together for safety resumed their journey after taking a rest day Sunday, while hundreds more migrants were pushing for entry to Mexico.(AP Photo/Rebecca Blackwell)

WASHINGTON - President Donald Trump is vowing to sign an executive order that would seek to end the right to U.S. citizenship for children born in the United States to noncitizens, a move most legal experts say runs afoul of the Constitution.

The action, which Trump previewed in a television clip broadcast Tuesday, would be the most aggressive by a president elected to office pledging to take a hard line on immigration, an issue he has revived in advance of next week's midterm elections.

"We're the only country in the world where a person comes in and has a baby, and the baby is essentially a citizen of the United States for 85 years with all of those benefits," Trump said during an interview with Axios scheduled to air as part of a new HBO series starting this weekend. "It's ridiculous. It's ridiculous. And it has to end."

Whether the move is legal, Trump seemed to welcome the controversy his comments ignited. The White House has been intent on stoking a debate over immigration as a way to motivate Trump's base to turn out for midterm elections in which Republicans risk losing the House.

In recent weeks, Trump has also repeatedly called attention to a migrant caravan making its way toward the U.S.-Mexico border, invoking it as a symbol of what he sees as wrong with the U.S. immigration system and blaming Democrats for a lack of action.

Trump, who has long decried "anchor babies," said he has discussed ending birthright citizenship with his legal counsel and believes it can be accomplished with executive action, a view at odds with the opinions of most legal scholars.

"It was always told to me that you needed a constitutional amendment. Guess what? You don't," Trump told Axios.

When told that view is disputed, Trump asserted: "You can definitely do it with an act of Congress. But now they're saying I can do it just with an executive order."

"It's in the process. It'll happen . . . with an executive order," he said, without offering a time frame.

"The president cannot erase the Constitution with an executive order," Jadwat said. "This is a transparent and blatantly unconstitutional attempt to sow division and fan the flames of anti-immigrant hatred in the days ahead of the midterms."

An executive order would be certain to spark a constitutional debate about the meaning of the 14th Amendment. It reads: "All persons born or naturalized in the United States, and subject to the jurisdiction thereof, are citizens of the United States and of the State wherein they reside."

Legal scholars have widely interpreted that to mean that anyone born on American soil automatically becomes a natural-born citizen.

In the part of the Axios interview that was released, it was not clear whether Trump would deny citizenship to the babies of any noncitizens, or just to those of immigrants in the country illegally.

The most cited Supreme Court decision in the area is the 1898 case United States v. Wong Kim Ark. The court held that a child born to Chinese immigrants who were legal residents was a birthright U.S. citizen under the 14th Amendment.

Related, but less directly on point, was the 1982 case Plyler v. Doe, which held that denying immigrant children in the country illegally admission to public schools would violate the 14th Amendment's equal protection clause.

Justice William Brennan, writing for the majority in the 5-to-4 decision, noted language from the Wong Kim Ark ruling.

But modern Supreme Courts simply have not been presented with the issue, so it is unclear how the current justices would see it.

"I think the president is looking at executive action," Pence said during the live-streamed interview. "We want to look in the broadest way possible at American law that may be used as a magnet to draw people into our country."

"It is not," he said, adding: "Let's recognize we have a crisis on our Southern border."

In a National Review column last month, New York lawyer Dan McLaughlin wrote that there are "fair grounds for debate" about the wisdom of the policy but little doubt on the law.

"A proper originalist interpretation of the U.S. Constitution, as presently written, guarantees American citizenship to those born within our borders, with only a few limited exceptions," McLaughlin wrote.

Some other scholars have argued that the case for birthright citizenship is based on a misreading of the 14th Amendment, which was drafted in relation to former slaves following the Civil War. They argue that the amendment should apply only to children born in the United States to lawful permanent residents, not unauthorized immigrants.

Michael Anton, a former national security official in the Trump administration, recently sought to advance that argument in a Washington Post op-ed, writing that the "notion that simply being born within the geographical limits of the United States automatically confers U.S. citizenship is an absurdity - historically, constitutionally, philosophically and practically."

In the Axios interview, Trump incorrectly asserted that the United States is the only country that offers birthright citizenship.

NumbersUSA, a group that favors reduced immigration, has compiled a list that shows 33 nations grant citizenship to anyone born within their borders.

The list includes Canada, Mexico, Brazil, Argentina and most other countries in Central and South America. The United States and Canada are the only two "developed" countries, as defined by the International Monetary Fund, that have unrestricted birthright citizenship laws.

Trump acknowledged his planned executive order as his administration prepared to take several other steps to address immigration in advance of the midterm elections.

Homeland Security and Pentagon officials said Monday that they will send 5,200 troops, military helicopters and giant spools of razor wire to the Mexican border in the coming days to brace for what Trump is calling an "invasion" of Central American migrants.

The troop deployment appears to be the largest U.S. active-duty mobilization along the U.S.-Mexico boundary in decades and amounts to a significant militarization of American border security.

"The shrinking caravan of refugees isn't a threat to the country or the constitutional order," he wrote on Twitter. "A president who tries to end birthright citizenship by executive order is."

A Research Center poll taken shortly after Trump launched his presidential bid in 2015 found that 60 percent opposed the idea of changing the U.S. Constitution to prohibit the children of people who are not legal residents from becoming citizens. Thirty-seven percent favored changing the Constitution to end "birthright citizenship."

The Washington Post’s Robert Barnes and Scott Clement contributed to this report.