Roger Stone presents himself as WikiLeaks insider in emails to Bannon 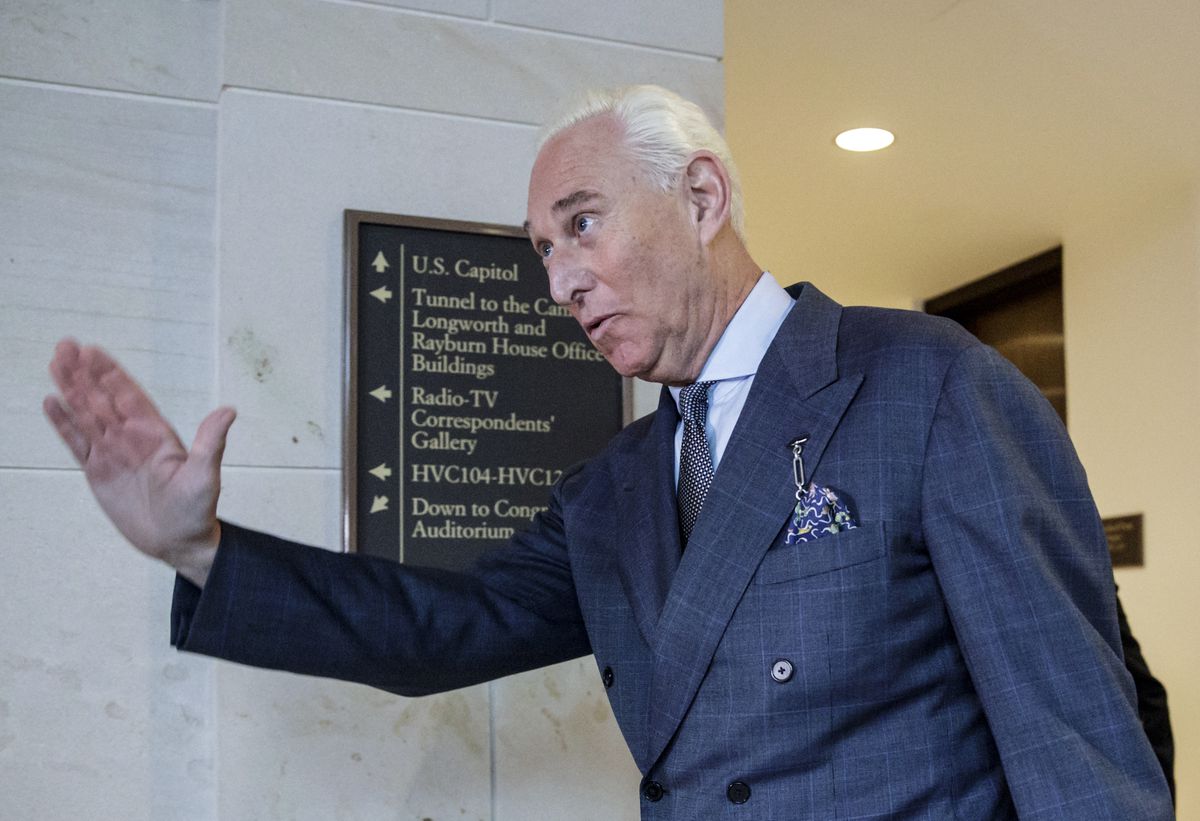 FILE - In this Sept. 26, 2017, file photo, Roger Stone arrives to testify before the House Intelligence Committee, on Capitol Hill in Washington. Newly released emails from the 2016 presidential campaign appear to show Stone presenting himself as a WikiLeaks insider to Steve Bannon, who was at the heart of then-candidate Donald Trump’s run for president. (AP Photo/J. Scott Applewhite, File)

FILE - In this Sept. 26, 2017, file photo, Roger Stone arrives to testify before the House Intelligence Committee, on Capitol Hill in Washington. Newly released emails from the 2016 presidential campaign appear to show Stone presenting himself as a WikiLeaks insider to Steve Bannon, who was at the heart of then-candidate Donald Trump’s run for president. (AP Photo/J. Scott Applewhite, File)

WASHINGTON — Newly released emails from the 2016 presidential campaign appear to show political operative Roger Stone presenting himself as a WikiLeaks insider to Steve Bannon, who was at the heart of then-candidate Donald Trump’s run for president.

The emails, which were published Thursday by The New York Times, touch on a central question of special counsel Robert Mueller's Russia investigation: Did Stone have advance knowledge of WikiLeaks' plans to release hacked material damaging to Democrat Hillary Clinton?

Stone says no, and the emails do not provide a definitive answer to that question. But the correspondence suggests that Stone wanted Bannon to see him as plugged in to WikiLeaks as it was planning to publish documents that would upend the campaign.

American intelligence agencies have concluded that Russian agents were the source of information released by WikiLeaks during the 2016 campaign. And Mueller, who is investigating potential coordination between Russia and the Trump campaign, has focused on Stone recently.

Mueller's team questioned Bannon last month about his exchanges with Stone, according to a person familiar with the interview. Bannon's interview was with prosecutors, though other people close to Stone have been called before a grand jury to discuss his ties to WikiLeaks.

The person familiar with Bannon's interview said Bannon and other top campaign officials were skeptical of Stone and his claims about having insight into WikiLeaks' efforts. The person spoke on condition of anonymity because they weren't authorized to discuss the confidential interview.

Stone, who confirmed the authenticity of the emails, denies being a conduit to WikiLeaks.

"What I am guilty of is using publicly available information and a solid tip to bluff, posture, hype and punk Democrats on Twitter. This is called 'politics.' It's not illegal," he said in an opinion piece published Thursday by The Daily Caller website.

He said he had based his comments on Assange's public statements and conversations with a New York radio host, Randy Credico, a vocal supporter of Assange who has also been interviewed by Mueller's grand jury.

In a telephone interview with the AP, Stone said: "I had no advanced notice of the source or content or the exact timing of the release of the WikiLeaks disclosures."

In one email exchange from Oct. 4. 2016, Bannon asks Stone about an announcement that morning by Assange that puzzled some Trump supporters.

In the announcement, Assange said he would be posting a cache of documents weekly that would include some related to the 2016 election, among other topics, but he denied that WikiLeaks intended to harm Clinton, saying such suggestions were "false."

Many Trump supporters — egged on by Stone himself — had been expecting Assange to provide details on potentially damaging information about Clinton, possibly even posting it that day. Stone had built up suspense on Twitter, saying on Oct. 3, 2016, "I have total confidence that @wikileaks and my hero Julian Assange will educate the American people soon. #LockHerUp."

In the wake of the disappointing announcement, Bannon fires off an email asking Stone "What was that this morning???"

Stone writes back: "Fear. Serious security concern. He thinks they are going to kill him and the London police are standing done. However —a load every week going forward."

Days later, WikiLeaks released the first batch of material — emails stolen from the account of Clinton campaign chairman, John Podesta. The Oct. 7, 2016, document dump came just hours after The Washington Post released audio from "Access Hollywood" in which Trump boasted of kissing and groping women without their permission.

WikiLeaks proceeded to dribble out the Podesta emails a thousand or so a day until Election Day.