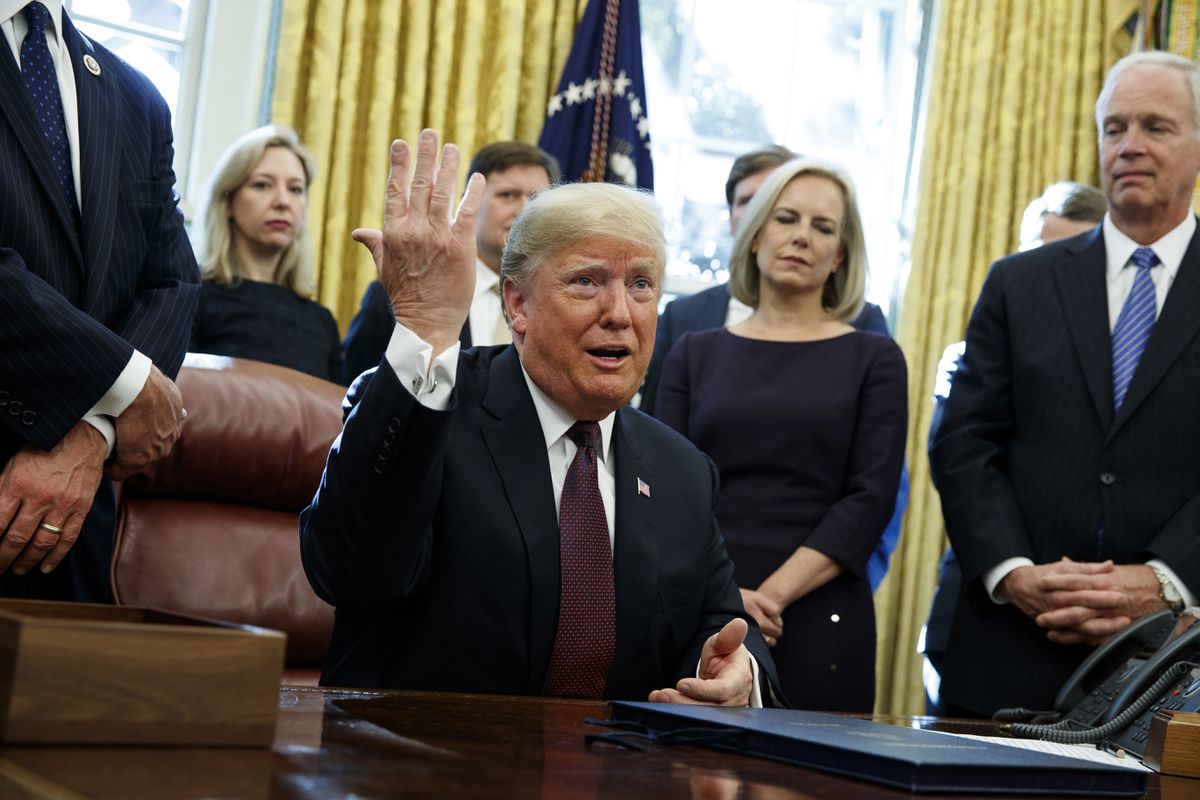 President Donald Trump answers a reporters question about the investigation of special counsel Robert Mueller during a signing ceremony of the "Cybersecurity and Infrastructure Security Agency Act," in the Oval Office of the White House, Friday, Nov. 16, 2018, in Washington. (AP Photo/Evan Vucci)

President Donald Trump answers a reporters question about the investigation of special counsel Robert Mueller during a signing ceremony of the "Cybersecurity and Infrastructure Security Agency Act," in the Oval Office of the White House, Friday, Nov. 16, 2018, in Washington. (AP Photo/Evan Vucci)

WASHINGTON — President Donald Trump said Friday that he has answered written questions from special counsel Robert Mueller but hasn’t yet submitted them.

Trump told reporters in the Oval Office that he answered the questions "very easily" this week about the special counsel's ongoing probe into 2016 election interference and possible ties between Russia and the president's campaign.

"You have to always be careful when you answer questions with people that probably have bad intentions," said Trump in his latest swipe at the integrity of the probe. "But no, the questions were very routinely answered by me."

The president did not say when he would turn over the answers to Mueller. The special counsel had signaled a willingness to accept written answers on matters of collusion but Trump's attorney, Rudy Giuliani, has said repeatedly that president would not answer Mueller's questions on possible obstruction of justice.

Trump had huddled with lawyers at the White House this week but made clear: "My lawyers don't write answers, I write answers."

The president continued to maintain his innocence while launching a fresh round of attacks on the probe, saying "there should have never been any Mueller investigation" while claiming it was a waste of millions of dollars.

But he denied being "agitated" by the probe despite his outburst of critical tweets the day before.

"The inner workings of the Mueller investigation are a total mess," Trump tweeted Thursday as part of a series of overheated morning posts. The investigators don't care "how many lives they can ruin," he wrote.

While the special counsel was publicly quiet in the run-up to last week's midterm elections, his investigation has suddenly returned to the forefront of Washington conversation and cable news chyrons.

Rumors are reverberating that Mueller may be preparing more indictments and there has been widespread media coverage of two Trump allies — Roger Stone and Jerome Corsi — who say they expect to be charged.

Trump’s flurry of attacks came despite repeated warnings from his aides to refrain from targeting the special counsel.