China issues protest against U.S. and Canada after arrest of Huawei executive 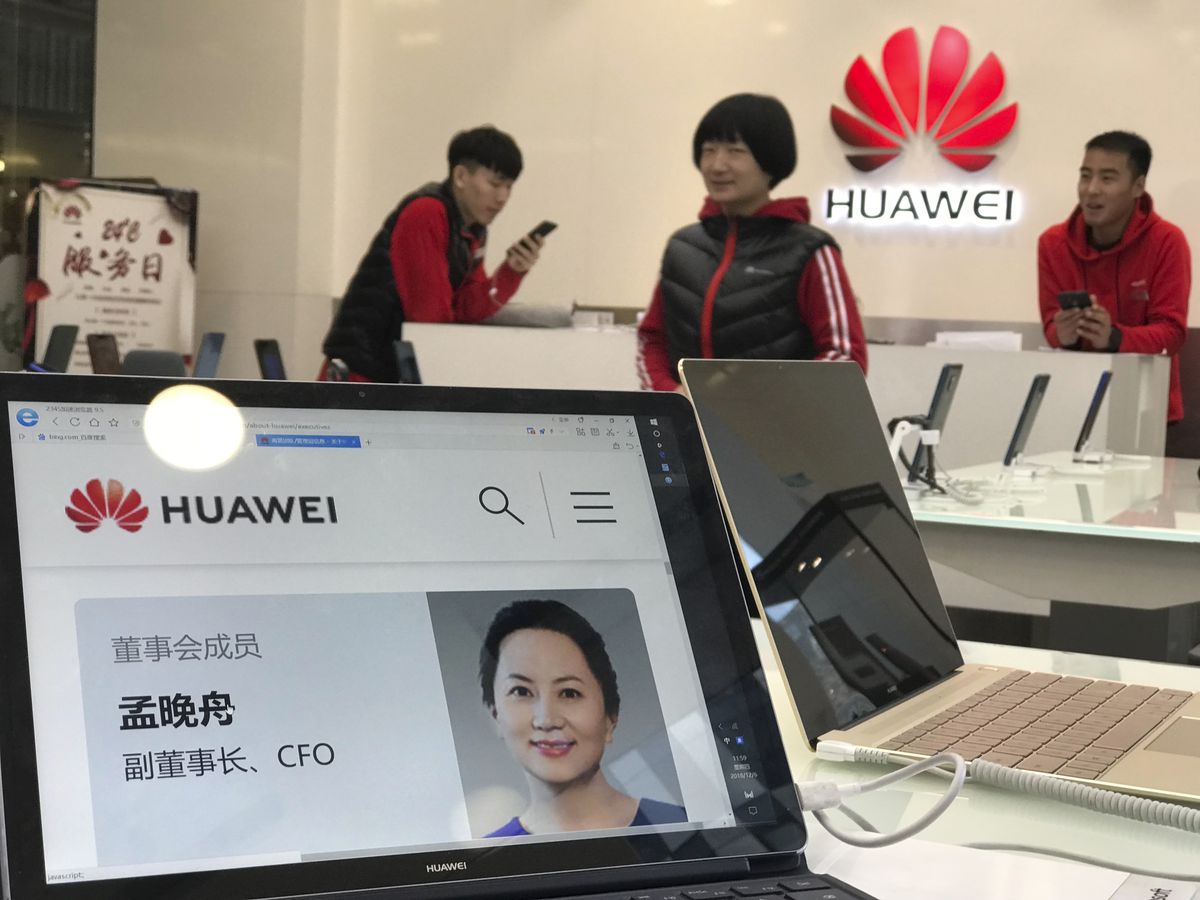 A profile of Huawei's chief financial officer Meng Wanzhou is displayed on a Huawei computer at a Huawei store in Beijing, China, Thursday, Dec. 6, 2018. Canadian authorities said Wednesday that they have arrested Meng for possible extradition to the United States. (AP Photo/Ng Han Guan)

A profile of Huawei's chief financial officer Meng Wanzhou is displayed on a Huawei computer at a Huawei store in Beijing, China, Thursday, Dec. 6, 2018. Canadian authorities said Wednesday that they have arrested Meng for possible extradition to the United States. (AP Photo/Ng Han Guan)

BEIJING — China on Thursday demanded that Canada release an executive of Chinese tech giant Huawei who was arrested in a case that compounds tensions with the U.S. and threatens to complicate trade talks.

Huawei, the biggest global supplier of network gear used by phone and internet companies, has been the target of deepening U.S. security concerns. Under President Donald Trump and his predecessor, Barack Obama, Washington has pressured European countries and other allies to limit use of its technology.

The U.S. sees Huawei and smaller Chinese tech suppliers as possible fronts for spying and as commercial competitors. The Trump administration says they benefit from improper subsidies and market barriers.

The timing of the arrest is awkward following the announcement of a U.S.-Chinese cease-fire in a trade war that has its roots in Beijing's technology policy. Meng was detained in Vancouver on Saturday, the day Trump and Xi Jinping met in Argentina and announced their deal.

U.S. national security adviser John Bolton told NPR that he knew of the pending arrest in advance. He declined to talk about the specifics of the case and said he didn't know if Trump knew about before it happened but added that there has been enormous concern about the practice of Chinese firms like Huawei allegedly using stolen U.S. intellectual property. He said that would be a major subject of negotiations with China.

Canadian Prime Minister Justin Trudeau said he was given a few days advance notice of the intention of Canadian authorities to arrest her but said it was the decision of law enforcement and there was no political interference.

"I can assure everyone that we are a country of an independent judiciary and the appropriate authorities took the decisions in this case without any political involvement or interference," Trudeau said.

A Chinese government statement said Meng broke no U.S. or Canadian laws and demanded Canada "immediately correct the mistake" and release her.

Beijing asked Washington and Ottawa to explain the reason for Meng's arrest, said a Foreign Ministry spokesman, Geng Shuang. He said arresting her without that violated her human rights.

But the Ministry of Commerce signaled that Beijing wants to avoid disrupting progress toward settling a dispute with Washington over technology policy that has led them to raise tariffs on billions of dollars of each other's goods.

China is confident they can reach a trade deal during the 90 days that Trump agreed to suspend U.S. tariff hikes, said a ministry spokesman, Gao Feng.

"The United States is stepping up containment of China in all respects," said Zhu Feng, an international relations expert at Nanjing University. He said targeting Huawei, one of its most successful companies, "will trigger anti-U.S. sentiment."

"The incident could turn out to be a breaking point," Zhu said.

On Wednesday, British phone carrier BT said it was removing Huawei equipment from the core of its mobile phone networks. It said Huawei still is a supplier of other equipment and a "valued innovation partner."

The Wall Street Journal reported this year U.S. authorities are investigating whether Huawei violated sanctions on Iran. The Chinese government appealed to Washington to avoid any steps that might damage business confidence.

Huawei's biggest Chinese rival, ZTE Corp., was nearly driven out of business this year when Washington barred it from buying U.S. technology over exports to North Korea and Iran. Trump restored access after ZTE agreed to pay a $1 billion fine, replace its executive team and embed a U.S.-chosen compliance team in the company.

Huawei is regarded as far stronger commercially than ZTE. Based in Shenzhen, near Hong Kong, Huawei has the biggest research and development budget of any Chinese company and a vast portfolio of patents, making it less dependent on American suppliers.

Its growing smartphone brand is among the top three global suppliers behind Samsung Electronics and Apple Inc. by number of handsets sold.

Meng was changing flights in Canada when she was detained "on behalf of the United States of America" to face unspecified charges in New York, according to a Huawei statement.

"The company has been provided very little information regarding the charges and is not aware of any wrongdoing by Ms. Meng," the statement said.

Huawei said it complies with all laws and rules where it operates, including export controls and sanctions of the U.N., the U.S. and European Union.

Meng's arrest also threatened to inflame disagreements over Iran and Trump's decision to break with other governments and re-impose sanctions over the country's nuclear development.

Geng, the foreign ministry spokesman, said China objects to unilateral sanctions outside the United Nations. China has said it will continue to do business with Iran despite the possible threat of U.S. penalties.

Meng is a prominent member of China's business world as deputy chairman of Huawei's board and the daughter of its founder Ren Zhengfei, a former Chinese military engineer.

Despite that, her arrest is unlikely to derail trade talks, said Willy Lam, a politics specialist at the Chinese University of Hong Kong.

"I think too much is at stake for Xi Jinping. He desperately wants a settlement," said Lam.

Trump has "pulled out all the stops" to hamper Chinese ambitions to challenge the U.S. as a technology leader, Lam said. That includes imposing limits on visas for Chinese students to study science and technology.

"If the Chinese need further convincing, this case would show them beyond doubt Trump's commitment," said Lam.

Gordon Houlden, director of the China Institute at the University of Alberta, said Canada and the U.S. have an extradition treaty and Canada has obligations that not even the prime minister can change.

"The prime minister cannot call up the judge and say 'please free this person.' Short of abrogating the treaty, this will roll on," Houlden said. "This is a really tough one for Canada. Our hands are largely tied by the extradition treaty."

"That's something we should be watching out for. It's a possibility. China plays rough," Mulroney said. "It's a prominent member of their society and it's a company that really embodies China's quest for global recognition as a technology power."