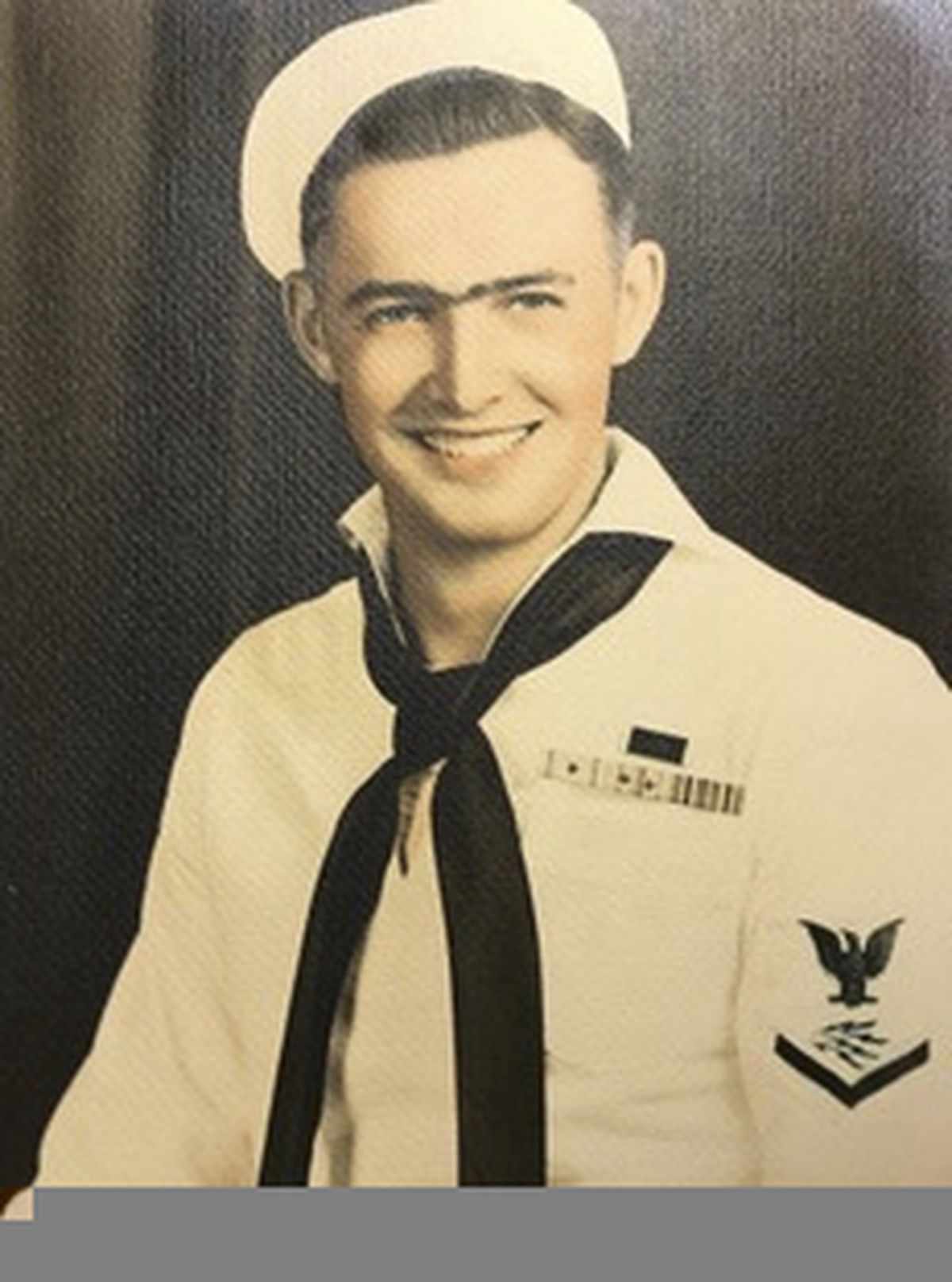 This photo provided by retired U.S. Navy Cmdr. Don Long shows Long in his Navy uniform in 1943. Long wasn't at Pearl Harbor when Japanese warplanes bombed Hawaii on December 7, 1941 - he was on the opposite side of Oahu aboard an anchored seaplane in Kaneohe Bay. But the Japanese strike reached his installation soon after Pearl Harbor, and the young sailor watched from afar as explosions and gunfire consumed him and his comrades. Now, 77 years later, Long will remember that day from even farther away - across the Pacific at his home in Northern California. (Don Long via AP)

This photo provided by retired U.S. Navy Cmdr. Don Long shows Long in his Navy uniform in 1943. Long wasn't at Pearl Harbor when Japanese warplanes bombed Hawaii on December 7, 1941 - he was on the opposite side of Oahu aboard an anchored seaplane in Kaneohe Bay. But the Japanese strike reached his installation soon after Pearl Harbor, and the young sailor watched from afar as explosions and gunfire consumed him and his comrades. Now, 77 years later, Long will remember that day from even farther away - across the Pacific at his home in Northern California. (Don Long via AP)

HONOLULU — Retired U.S. Navy Cmdr. Don Long was alone on an anchored military seaplane in the middle of a bay across the island from Pearl Harbor when Japanese warplanes started striking Hawaii on December 7, 1941, watching from afar as the bombs and bullets killed and wounded thousands.

The waves of attacking planes reached his military installation on Kaneohe Bay soon after Pearl Harbor was struck, and the young sailor saw buildings and planes start to explode all around him.

When the gunfire finally reached him, setting the aircraft ablaze, he jumped into the water and found himself swimming through fire to safety.

Now 97, Long will remember the 77th anniversary of the attack from his home in Napa, California.

He shared some of his memories this week with The Associated Press:

Long was fresh out of boot camp when he arrived in Hawaii in 1941.

"I got off that ship with my sea bag over my shoulder and we threw it on a truck and they carted me over to Kaneohe from Pearl Harbor where we had landed," Long recalled.

It was a different experience when he flew to Hawaii for the 75th anniversary in 2016, a trip that was paid for by a survivor's group.

"We came in on a first class United chartered jet . all the girls with the leis were there with the Hawaiian music," he remembered. "We ended up not in a bunk in the barracks, but in a very nice ocean room at the Hawaiian Hilton."

He attended a dinner where survivors were seated at random with dignitaries. At his table were Japan's Honolulu-based consul general and his wife.

"He and his wife were there in full regalia," Long said. He asked if they might be able to help him identify the pilot who attacked his plane 77 years ago.

"They did some searching I guess, or told somebody to do it, but within a month or so I got a message from them and the proof is not positive but they sent the information on three Japanese pilots. It was probably one of those three," Long said. All three have died, but Long was impressed the consul general had taken the time to find out.

Long no longer harbors ill will against Japan or its people.

"I don't know when that feeling left me. But as you are probably well aware, we were taught to hate those people with all our hearts, and when you're looking at one down a gun sight, you can't really feel much love for anyone — that's for darn sure," he said.

"That has long since changed."

Long has not always marked the anniversary like he does now.

This year, Long plans to visit school children to talk about Pearl Harbor , then will light a beacon atop Mount Diablo in Concord, California. The beacon, known as the Eye of Diablo, was put out shortly after the attack in 1941. In 1964, Fleet Adm. Chester Nimitz, commander of U.S. Pacific forces during World War II, relit the beacon, beginning a yearly tradition.

On Friday morning at about the time of the attack, Long spoke with the AP at his home as he prepared for the day: "I recall the day very, very distinctly," he said. "I don't usually think of it as this day but as the day that started the war for our country that caused so, so much havoc. And I do recall the friends who never came back with, oh, much sadness."

Long remembers that weekend of the attack as routine, "or so it started out," he wrote in a 1992 essay that he provided to The Associated Press.

The 20-year-old seaman from Minnesota enrolled in boot camp in March 1941, a "snotty nose kid, fresh off the farm." That Sunday morning was his first day of operational duty with the squadron he had been assigned to about a month earlier.

He was tasked with standing watch aboard a seaplane in the bay across the island from Pearl Harbor.

He arrived early and took a small boat toward the awaiting Catalina flying boat, cruising across the turquoise waters of windward Oahu with Hawaii's 73-degree air splashing across his face.

"I recall it was a beautiful sunny day in Hawaii that morning," Long said.

He relieved a comrade who had stood watch overnight, and began preparing for a day of signal drills and regular maintenance checks. He settled into the pilot's compartment to wait for contact from the beach signaling station to begin his drills.

A few minutes later, he heard the roar of airplanes overhead and then the sound of explosions. He assumed it was U.S. military making practice runs, but quickly realized he was wrong. In the distance, Long saw planes flying over hangars and buildings exploding. Another plane that was anchored nearby was hit and burst into flames.

Seconds later, a Japanese plane made a run toward his moored aircraft. "The sequence of events during the next few minutes is not entirely clear," he recalled.

Long jumped from the pilot's seat and started looking for a life jacket, but bullets were immediately producing fountains of seawater inside the cabin. The fuel tanks in the wings were hit, and he was quickly surrounded by flames.

He gave up on the life jacket and made a run for the rear exit. Gasoline was ablaze on the water, so he jumped into the bay and swam beneath the flames to get away from the burning plane. He came to the surface and through the flames three times for air.

He soon realized his military-issued high-top work shoes were bogging him down, so he dove underwater and removed them. Still far from shore, Long found a wooden channel marker and swam to it, ducking beneath the waves to hide every time a Japanese plane made a pass.

Once the attack planes left Long saw flames, smoke and sinking aircraft all around the bay. He spotted a boat that was searching for survivors and flagged them down.

Swimming through the flames burned his head, face and arms, but Long considered himself in good health compared to the wounded and dead around him.

"Shipmates on the shore greeted me with comments like 'we never expected to see you again,'" Long recalled. "I was told I looked pretty bad."

"The attack was over, but much turmoil remained," he wrote. "That's it — the start of the first day of a long war."