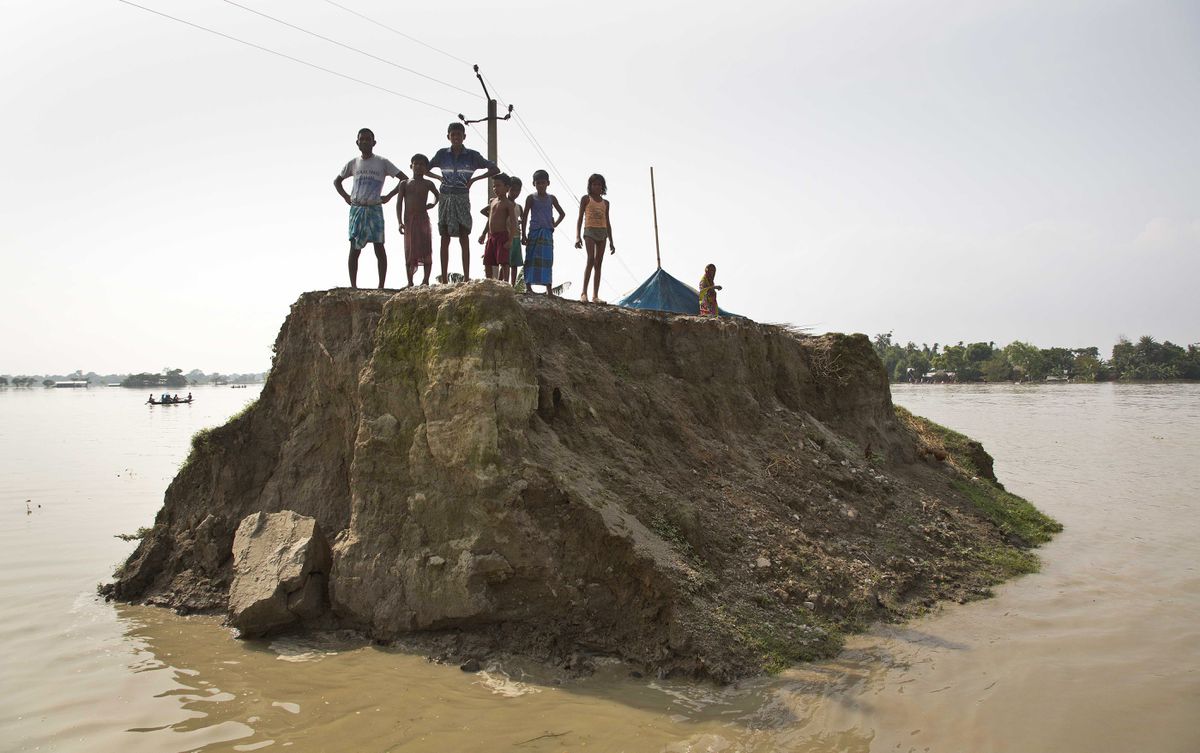 In this Aug. 15, 2017, file photo, flood-affected villagers wait for relief material on what's left of a road washed away by floodwaters in Morigaon district, east of Gauhati, northeastern state of Assam. AP Photo/Anupam Nath, File)

In this Aug. 15, 2017, file photo, flood-affected villagers wait for relief material on what's left of a road washed away by floodwaters in Morigaon district, east of Gauhati, northeastern state of Assam. AP Photo/Anupam Nath, File)

A drought that scorched the Great Plains, causing wildfires and $2.5 billion in agriculture losses. Catastrophic floods that submerged more than a third of Bangladesh. Record-shattering heat waves that killed scores of people in Europe and China.

These were among 15 extreme weather events in 2017 that were made more likely by human-cased climate change, according to a suite of in-depth studies published this week in the Bulletin of the American Meteorological Society. At least one episode - a devastating marine heat wave off the coast of Australia that cooked ecosystems and damaged fisheries - would have been “virtually impossible” without human influence, scientists said.

The findings, which were presented Monday at a meeting of the American Geophysical Union, underscore the degree to which climate change is already harming human society, researchers said.

"People used to talk about climate change as a very complex and difficult problem of the future - something that would happen in places far away and on long time scales," said Jeff Rosenfeld, the Bulletin's editor in chief. "But hurricanes and wildfires and bleaching and drought . . . they're happening to us right now, and we face new and challenging risks of how they're going to affect us in the future."

The Bulletin has published an "Explaining Extremes" report, which seeks to determine what weather events can be attributed to climate change, every year since 2011. This is the second year in a row that scientists have identified an event that could not have happened without human-induced warming.

This year's report features 17 peer-reviewed analyses of 16 disasters by 120 researchers looking at weather across six continents and two oceans. Each study uses historical records and model simulations to determine how much climate may have influenced a particular event.

A study of the record-breaking heat wave that devastated Europe and the Mediterranean in 2017 found that such events are now three times more likely than they were in 1950. The chance of such an event recurring in any given summer is now 10 percent. In China and Bangladesh, climate change made deadly flooding twice as likely. And a drought in East Africa that left 6 million people in Somalia facing food shortages was caused by dramatic ocean warming that could not have occurred without humans' impact on the environment.

Ocean warming played a role in several of the events examined, Rosenfeld said.

"If there's anything that's disturbing . . . " He cut himself off with a wry laugh. "Well, everything is disturbing.

"But what I mean is that if there's something that has changed in these studies, one of them is that the connections are more apparent between the ocean and land," Rosenfeld continued. "The ocean has its warming temper tantrums just like the weather over land does."

This runs counter to a popular image of the ocean as a vast global warming buffer, capable of taking up huge amounts of additional carbon that humans have added to the global system.

"The fact that we're seeing the oceans as a link in a chain of causes that ultimately tie human causes to extreme weather events on land means the ocean is not just there to keep us from being bothered by climate change," Rosenfeld said. "Quite the opposite. The ocean is actively playing a role in the extremes that we're seeing."

The studies in the report don't represent a comprehensive analysis of all extreme weather in 2017. Stephanie Herring, a meteorologist at the National Oceanic and Atmospheric Administration who was the lead editor of the report, said that the examined events were selected for diversity in type and location. None of the researchers involved knew whether they would discover a climate link when they began work on the report.

Yet only one of the studies - a look at wildfires in Australia - did not find a role for climate change.

Martin Hoerling, a NOAA scientist and co-editor on the report, said "the human fingerprint is more evident" than when the Bulletin began quantifying climate change influence on extreme weather seven years ago. The warmer Earth's average temperature gets, the more scientists are seeing how sensitive weather is to the change. "The climate of Earth keeps moving further and further from the world which many of us, and certainly our parents, were initially accustomed to," Hoerling said.

Scientists have traditionally been wary of blaming any individual event on climate change. The global climate is a complex system, and the consequences of humans pumping atmospheric greenhouse gas levels to nearly twice their preindustrial average can be difficult to disentangle. Most conversations about climate's impact did not get more specific than global averages and seasonal shifts.

But "it is now possible, with confidence, to determine how much an extreme weather event has been affected by human activities," Hoerling said. "It is a key step toward better understanding the economic consequence of climate change, since extreme events are often associated with the most dire losses in property and life."

But thanks to improved data collection and increasingly sophisticated climate models, researchers can now see the influence of climate change on specific disasters, such as six days of rain over northeast Bangladesh.

The growing field of "attribution science" is as much about the future as it is about the past, Herring said. If scientists can determine how much climate change contributed to a particular extreme event, they can also predict the likelihood of the event repeating in years to come.

"If we don't have good science about how extremes are changing," Herring said, "then we can't be engaged in the conversation about how to manage the risk."

"If something was a 500-year flood but research shows it's now going to be a 200-year flood, that changes a lot of things," Herring said. "It affects infrastructure, it changes how communities and societies make investment choices."

For people who are interested in learning how climate change is altering their environment, Hoerling has a very direct explanation.

“It is making weather worse, and creating a more hostile environment for thriving,” Hoerling said. From the Arctic, where sea ice is shrinking to coastal regions where storm surge is higher to heat waves in urban centers where some lack the means to stay cool, the list of ways climate change is affecting us right now, Hoerling says, “is lengthy.”