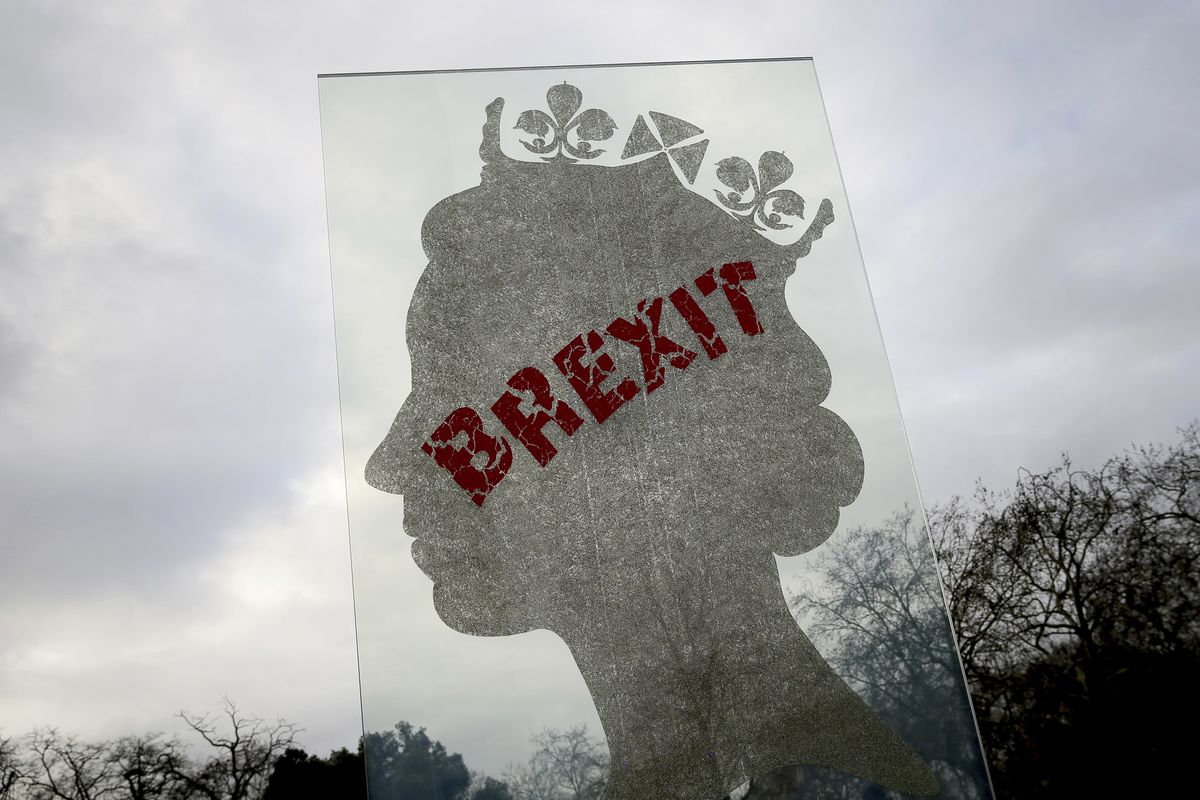 A view of a sculpture by London based Italian artist Matt Marga "One Million Queen" which depicts a profile of Britain's Queen Elizabeth II in London, Monday, Dec. 10, 2018. The sculpture has been defaced with Brexit graffiti. (AP Photo/Tim Ireland)

A view of a sculpture by London based Italian artist Matt Marga "One Million Queen" which depicts a profile of Britain's Queen Elizabeth II in London, Monday, Dec. 10, 2018. The sculpture has been defaced with Brexit graffiti. (AP Photo/Tim Ireland)

LONDON — British Prime Minister Theresa May on Monday postponed Parliament’s vote on her Brexit divorce deal with the European Union, acknowledging that lawmakers would have rejected it by a “significant margin.”

The move averted a humiliating defeat for the government in a vote that had been scheduled for Tuesday. But it throws Britain's Brexit plans into disarray, with the country's departure from the EU just over three months away on March 29.

In an emergency statement to the House of Commons, May accepted that lawmakers had "widespread and deep concern" about some aspects of the divorce deal agreed upon last month between May and EU leaders.

"As a result, if we went ahead and held the vote tomorrow, the deal would be rejected by a significant margin," she said. "We will therefore defer the vote."

May said she would seek "assurances" from the EU and bring the Brexit deal back to Parliament, but did not set a new date for the vote.

Many lawmakers were scathing in their comments about both May's actions and the Brexit deal, and derisive laughter erupted when May claimed there was "broad support" for many aspects of the plan.

"The government has lost control of events and is in complete disarray," said opposition Labour leader Jeremy Corbyn.

The pound, already foundering Monday amid rumors that the vote would be postponed, sank further on the news, hitting a 20-month low against the U.S. dollar of $1.2515.

May insisted that her Brexit deal was still "the best deal that is negotiable," and said rejecting it raised the chances of Britain crashing out of the EU with no agreement, bringing logjams to British ports and plunging the country possibly into the deepest recession in decades.

"For as long as we fail to agree a deal, the risk of an accidental 'no deal' increases," May said, adding that her government would step preparations for such an outcome so as to mitigate its worst effects.

Delaying the Brexit vote is a bracing new blow for May, who became prime minister after Britain's 2016 decision to leave the EU. She has been battling ever since — first to strike a divorce deal with the bloc, then to sell it to skeptical British lawmakers.

May's Conservative government does not have a majority in the House of Commons, and opposition parties — as well as dozens of Conservative lawmakers — said they would not back the divorce deal.

"Why has it taken the prime minister this long to face up to the reality" that lawmakers will not back her deal? SNP deputy leader Kirsty Blackman asked Monday.

May said she would hold talks with EU leaders ahead of a summit in Brussels on Thursday and Friday, seeking "further reassurances" over the backstop.

"Nothing should be off the table," she said.

The Brexit disarray leaves both May and her minority Conservative government on shaky ground. The Labour Party has said it may call for a no-confidence motion in the government. Scottish First Minister Nicola Sturgeon said her Scottish National Party would support an attempt to topple the government and trigger a new election.

"This shambles can't go on — so how about it?" Sturgeon tweeted at Corbyn.

Corbyn stopped short of calling a no-confidence vote Monday, but said if May could not renegotiate with the EU, "then she must make way."

Pro-Brexit lawmakers say the deal keeps Britain bound too closely to the EU, while pro-EU politicians say it erects barriers between the U.K. and its biggest trading partner and leaves many details of the future relationship undecided.

The main sticking point is a "backstop" provision that aims to guarantee an open border between EU member Ireland and the U.K.'s Northern Ireland after Brexit. The measure would keep Britain under EU customs rules, and is supposed to last until it is superseded by permanent new trade arrangements.

Critics say it could leave Britain tied to the EU indefinitely, unable to strike new trade deals around the world.

Pro-Brexit lawmakers said they wouldn't support May's agreement unless she renegotiated it to remove the Irish backstop. Steve Baker, a leading Conservative Brexiteer, said Monday that May should "go back to Brussels and demand a better deal."

"The deal is the deal," Irish Foreign Minister Simon Coveney said Monday. "It's taken two years to put together. It's a fair deal for both sides."

In the EU, there was exasperation at Britain's indecision.

Guy Verhofstadt, the European Parliament's Brexit Coordinator, tweeted : "I can't follow anymore. After two years of negotiations, the Tory government wants to delay the vote. Just keep in mind that we will never let the Irish down."

In another twist in the Brexit tale, the EU's top court ruled Monday that Britain can change its mind over Brexit, boosting the hopes of British people who want to stay in the EU that the process can be reversed.

The European Court of Justice ruled that when an EU member country has notified the bloc of its intent to leave, "that member state is free to revoke unilaterally that notification."

Britain invoked Article 50 of the EU's Lisbon Treaty in March 2017, triggering a two-year exit process. But Scottish legislators had asked the ECJ to rule on whether the U.K. could pull out of the withdrawal procedure on its own.

The Luxembourg-based ECJ said that, given the absence of any exit provision in Article 50, countries are able to change their mind in line with their own constitutional arrangements.

May has repeatedly said the government will not seek to delay or reverse Brexit. She said Monday that Parliament had a duty to "get Brexit done and get it done right. "

"Does this House want to deliver Brexit?" May asked. "If the answer is yes, and I believe that is the answer of the majority of this House, then we all have to ask ourselves whether we are prepared to make a compromise."